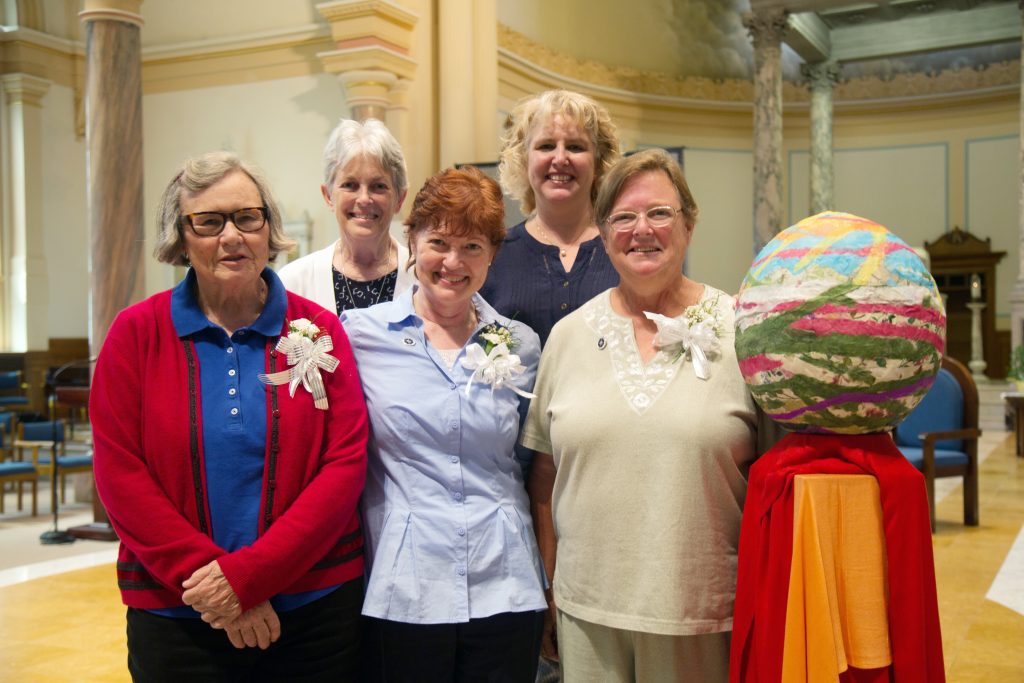 Branching out to others for the sake of service has always been at the heart of the Sisters of Charity mission, and it is one that Lifetime Associate Kay Clifton practices daily. Taking part in a variety of services with a variety of Sisters, Kay is committed to the Gospel and the Charism of Charity.

Kay’s journey with the Sisters of Charity began in the mid-1980s when she applied for a teaching position in the Sociology Department at the College of Mount St. Joseph (now known as Mount St. Joseph University). She taught sociology and social work, and later also became an adjunct in the Religious Studies master’s program. She moved to her family home in 2008, although she came back to teach short-term courses for several years. While at the college, she chaired the department as it grew to become the Behavioral Sciences Department and served as the faculty president. Two of Kay’s most important mentors during these years were the late Sisters Elizabeth Cashman and John Miriam Jones, both of whom were deans at the college. In different ways they boldly, yet prudently, counseled ways to approach sensitive issues concerning curricular innovation and faculty-administration issues. As faithful women, they modeled the Sisters of Charity charism in professional settings.

As a faculty member at the College, Kay not only worked with the Sisters but she also volunteered for ministries and team-taught with and among them. “This began with work at EarthConnection as it was being built, later on the board, and then again with [S. Winnie Brubach and] the garden ladies,” she said. “The hard work of landscaping and gardening which is such a joyful and spiritual time for me is when I began to fully realize that service is the joy my Dad assured me I would find.” Part of this growing realization of the joy of service emerged during team-teaching with S. Marge Kloos through the Service Learning courses that combined sociology and religious studies with service trips to Cherokee and the Texas/Mexico border. She was impressed with the dedication of the ‘border Sisters,’ and feels growing gratitude to S. Jean Miller. S. Jean’s leadership led Kay, a self-proclaimed ‘life-long control freak,’ to realize that she could survive, even thrive, in situations in which she had little to no control: core spiritual lessons. The classes and trips with S. Marge wove a friendship that spun sociology and theology analysis into what they thought could surely solve the world’s problems. Kay misses daily sharing with Sisters Winnie and Marge, visits when she can, remotely and face-to-face, and hopes she is still finding small ways to continue what she gained with them.

In January 2004, Kay was named one of three recipients of the Sisters of Charity’s St. Elizabeth Ann Seton Award, the Congregation’s highest honor. In their nomination, Sisters Winnie Brubach, Elizabeth Cashman, Marge Kloos and Annette Muckerheide stated, “Rarely does the embodiment of healer, teacher and social servant happen in one person, but Kay is a living example of such a person. Perhaps her most striking contribution to the mission of the college has been her involvement in the development of key interdisciplinary course.”

Journeying alongside the Sisters led Kay to make her commitment as an Associate in Mission to the Community in 2005. At the time of discernment, she said, “These ministries are my working faith when I am by myself, and sharing them with Sisters has made my life more meaningful and any efficacy more probable. I expect that making a public commitment will increase these consequences and present me with emergent possibilities.”

While she considered sisterhood, Kay instead became a Methodist deaconess, spending several years on the national leadership team. Now retired, at home in Illinois Kay considers herself to be “multi-churched” because she is involved in teaching adult Sunday school classes at both a nearby Methodist and Presbyterian church. She is also a member of the United Methodist Women organization where she is a district president. Kay says, “In Illinois, I carry on with service at local churches for after-school programs and Vacation Bible School for children, adult Sunday schools and work at the local food pantry three days a week.”

Despite her distance from the Sisters of Charity, Kay still feels that she is lovingly embraced by their mutual love of Christ. She made her lifetime commitment with the Community in 2017 saying, “The spirituality of service, unlike a spirituality of worship, is not contained to identified moments and hours. The spirituality of service engulfs and expands, somewhat like God’s expanding universe. I literally learned this by being with Sisters, taking part in the daily and hourly decisions that collaboratively co-create. I am ever grateful for this modeling, and hope that I am being that model to others where I am now. I am not with you in Cincinnati, but you are with me.”

As her service suggests, Kay is involved in many traditions of the Christian faith, but her personal mission is identical to the mission of the Sisters of Charity. Kay lives the Gospel in the most inclusive ways possible. Although she no longer lives near the Sisters and Mount St. Joseph, she remains aligned with the Sisters charism and spirituality.