Far from Home: Sisters recall their travel experiences during the COVID-19 pandemic 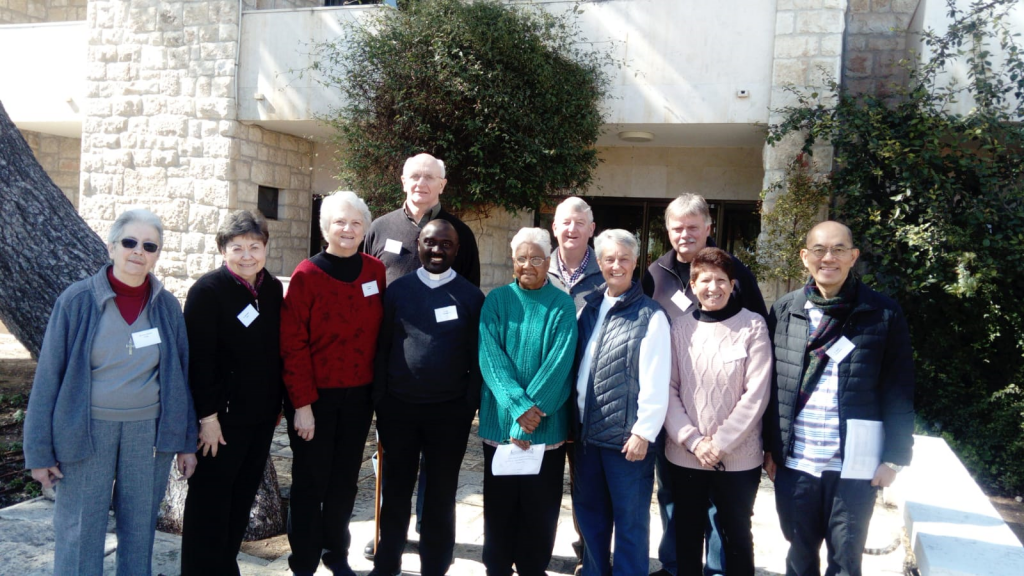 In March 2020, the United States began to experience the reality and urgency of the COVID-19 pandemic. As schools closed, businesses shut down and stay-at-home orders were mandated, citizens who were traveling outside the country were faced with the fear of getting home – and quick. Three Sisters of Charity of Cincinnati were among the masses who found themselves in this unnerving situation. Miles from home and with travel restrictions changing rapidly, they were forced to make decisions quickly and with the help of Sisters and colleagues from afar.

Sisters Jackie Leech and Donna Steffen traveled to Jerusalem, Israel, on Feb. 9, 2020, for a six-week Continuing Education Program at Tantur Ecumenical Institute, sponsored by the University of Notre Dame and the Vatican. S. Donna explained that when the two left in February they knew that the situation in Wuhan, China was serious, however, its spread had not yet become as clear. Shortly after their arrival, the condition in Israel began to rapidly change. After one of the 11 participants in their program was taken to the hospital to be tested for COVID-19, the group was asked to quarantine until the results came back. The participant tested negative, and the group was able to continue with the scheduled program until March 6, when the borders of the West Bank were closed. Buses would not allow foreigners on them; sacred sites were closed; and most of the workers at Tantur, who lived in Bethlehem, could not come to work.

By this time Sisters Donna and Jackie said they were hit with the seriousness of the situation around the world. Beginning March 12, meals at Tantur were delivered to their rooms. Their group was the only one left, scheduled tours and outings were few and far between. Sisters from home were writing and encouraging them to come home – and soon; Tantur requested the same. With the help of Executive Assistant Kathi Zeinner on March 11, they rebooked their flights for March 19, the earliest seats Delta had available to return from Tel Aviv. However, S. Donna said it was after seeing that President Trump had ordered that no flights from the European Union could land in the U.S., that she began to get nervous; their flight was scheduled to come through Amsterdam. With the encouragement and support of Leadership Councilor S. Marge Kloos, who told them to do whatever was needed to get home safe and as soon as possible, they booked new flights and were on their way home March 14.

While the situation was a bit unnerving, both Sisters Jackie and Donna found comfort in each other and those in similar situations. “I didn’t feel isolated,” said S. Jackie. “At the Tel Aviv airport it was apparent that we were all in the same boat. A lot of exchange students were on the plane since universities and schools had closed down. I was relieved when the plane took off and even more relieved when we landed in Washington, D.C.” S. Jackie, who resides in Denver, Colorado, said once they touched down in Cincinnati, she stayed in a hotel overnight before taking the first plane home the following morning. “I was so happy to open the door to my house and walk in,” she recalled. “In fact, I was excited!”

Added S. Donna, “I am so grateful for this time, to be back in my house, and for some self-space to gradually take all this in. I could see that those at Tantur were doing their best to make decisions for our good, given the parameters they had. I felt lucky to be in a safe and caring environment. I also was glad to have another Sister of Charity there, that we could talk together about choices we needed to make. We are blessed as Sisters of Charity!”

“We certainly belong to a much smaller world than I imagined before this virus hit,” concluded S. Jackie. “How it has affected everyone on this universe makes me realize that we are all interconnected. We are not the ones in control, and perhaps through all of this, people will grow closer to God, nations will quit fighting and all people will learn to love one another.” 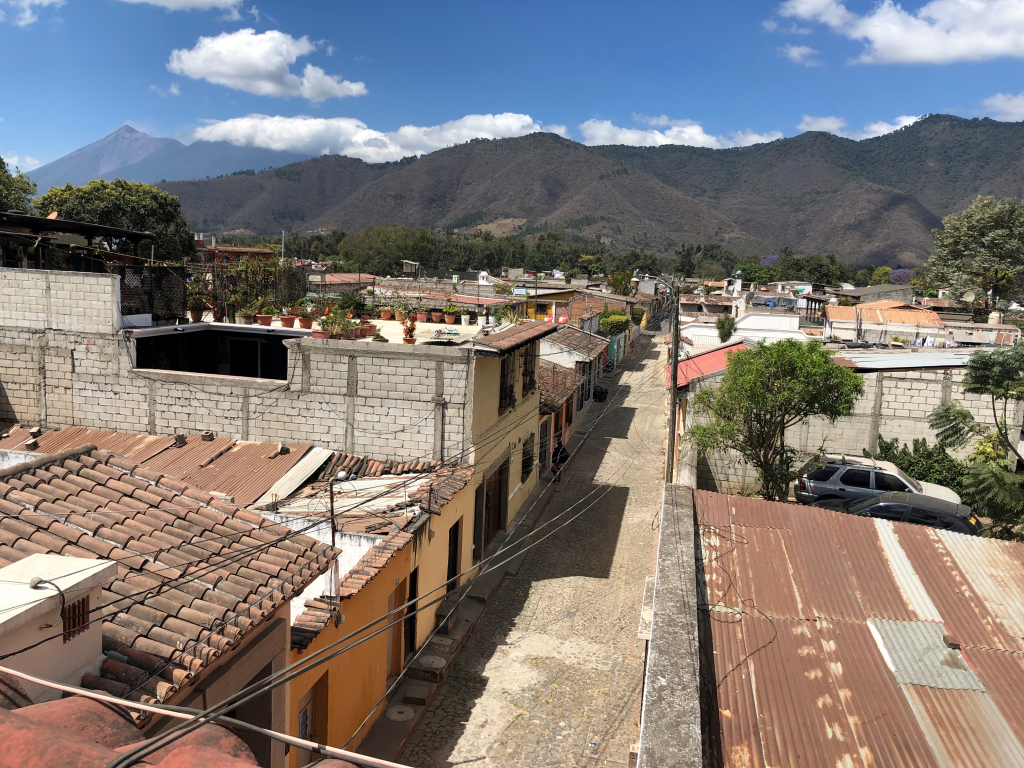 A view of Antigua, Guatemala, from the rooftop of S. Louise Lears’ host family’s home. S. Louise was in Antigua for an intensive Spanish program when concerns about COVID-19 and travel became prevalent around the world.

On Feb. 16, 2020, S. Louise Lears traveled to Antigua, Guatemala, for a four-week intensive Spanish program at PLFM, one of the oldest language schools in Antigua. Scheduled to return on Wednesday, March 18, S. Louise said it was around week three that she started to hear concerns about COVID-19 from Sisters, family and friends in the U.S. There were no confirmed cases of the virus in Guatemala, though there was concern of the effect COVID-19 would have on the economy of Guatemala. At the language school the number of students had decreased rapidly from 24 to 13 to eight. “The economy of Antigua is based on tourism and language schools,” she said. “If there are no students, the teachers at the school have no jobs.”

By Tuesday, March 10, S. Louise said it became clear to her that she needed to get home quickly. There were rumors of flights to the United States being cancelled and borders being closed. However, it was virtually impossible for S. Louise to make flight arrangements from Guatemala. On Thursday, March 12, with the help of S. Marge Kloos and Kathi Zeinner, a flight was secured for her the next morning!

“I made arrangements with the school for transportation to Guatemala City, said very quick goodbyes to people at the school and to my host family, packed my suitcases and got on the van to Guatemala City,” she recalled. “It was a two-hour drive because of traffic and I got to S. Sarah Mulligan’s house around 6:30 p.m. Sarah had arranged a taxi to take me to the airport at 5 a.m. the next day. I felt really anxious on the ride to the airport. Even at 5 a.m. the traffic in Guatemala City was awful. Suppose I missed my plane? I did not relax until I got to the gate in the airport and actually saw our plane. I cried with relief.” Within a few days of returning home, flights from the U.S. to Guatemala were cancelled and then flights to the U.S. were cancelled, and finally the border was closed.

Traveling home during such an unprecedented moment in history, S. Louise was grateful for the kindnesses she experienced along the way. While walking through the airport in Guatemala City, she said every few feet an agent would ask if she needed help. And on the plane, flight attendants were very aware of their U.S. passengers’ anxiousness and did everything possible to relieve those concerns.

Of the experience, S. Louise said: “I never felt so far away and yet so supported. I believed in my innermost being that I would get home. I wasn’t sure how or when, but I knew the Community would help me find a way. My cell phone kept me connected and the prayers from Sisters, family and friends kept me grounded. … I have rarely felt so dependent on God, so vulnerable, and so aware of God’s presence than in those last weeks in Antigua.”

For all three Sisters of Charity it is clear that the experience will remain with them. Seeing the world pull together and receiving comfort and strength from God and others – some they only became acquainted with in their travels home – were uplifting reminders of our interconnectedness. In times of worry and fear, it is heartwarming and reassuring to know that we are all God’s people and one.