Take a caring heart.
Tune it to the “love for the poor” channel.
Challenge it to make a difference.
Surround it with like-minded volunteers.
Ask them to raise money for the cause.
And ~ what do you have?
Sisters and Associates who dare to risk A Caring Response. 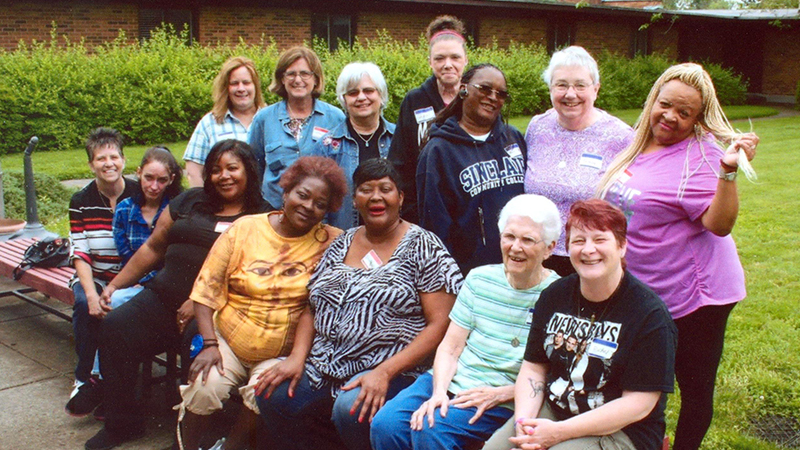 S. Teresa Marie Laengle (back row, second from right) initiated the Ignatian Spirituality Project in the area and has been the coordinator in Dayton since 2010.

A little-known ministry that makes a significant impact in the lives of homeless and addicted persons is the Ignatian Spirituality Project (ISP). The Chicago-based international program is in 31 cities across the U.S. as well as in Canada and Ireland. The ISP National Office sponsors the ministry run totally by volunteers who fundraise locally to cover retreat costs. The national office picks up shortfall and assists with some fundraising and grant writing.

The ISP provides overnight weekend retreats for men and women who are or have been homeless and are in recovery from any kind of addiction. Retreatants range in age from their 20s to 60s, have been sober for 60-90 days and most are living in transitional sober houses. The retreat is not connected with any religion but attendees have to rely on a higher power, however that is understood. Activities are based on the Spiritual Exercises of St. Ignatius, the 12-Step Program, and the Ignatian belief that we are able to “Find God in All Things.” About one month after the retreat a follow-up reflection day is held.

Many Sisters and Associates participate in the ISP effort. This article focuses on the perspectives of Sisters Joyce Brehm, Annie Klapheke, and Donna Steffen in Cincinnati and S. Teresa Marie Laengle in Dayton. All have been trained in the ISP. 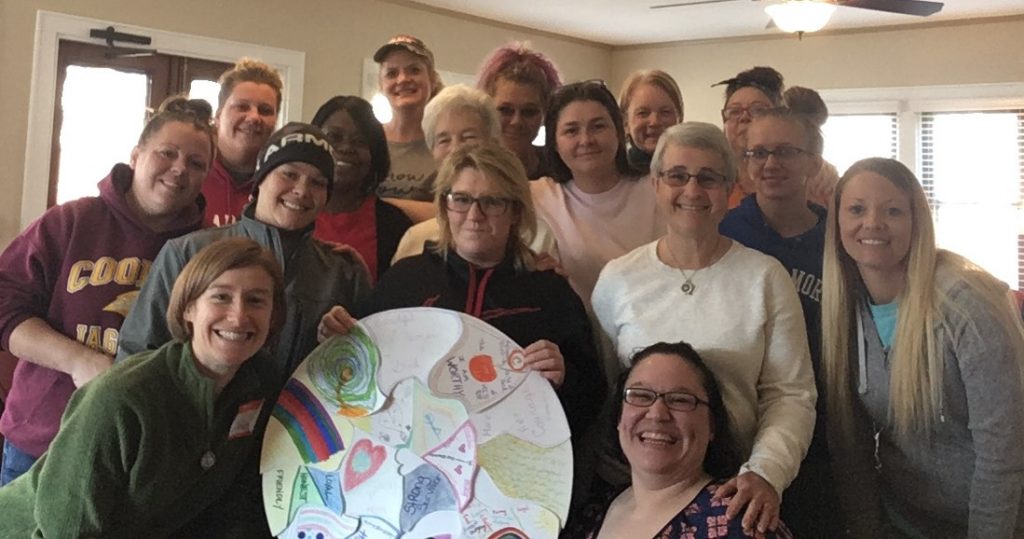 How Did ISP Retreats Come to Cincinnati and Dayton?

Donna and three others were invited to work with Fr. Bill Creed, SJ, in 2009 to plan the first Cincinnati women’s retreat which was held at Mount St. Joseph and where annually three of six women’s retreats are held. Follow-up evenings are the second Monday of every month. In Dayton, there are four annual retreats and follow-ups for women.

“On weekends we see the team, not as ‘giving’ the retreat, but that we are making the retreat together. I learn about poverty, homelessness, surrender, the desire for wholeness, and the challenge of living and making good choices. I have learned that we all have addictions going on in us, beyond the commonly thought of alcohol or drugs. We are all on the journey to wholeness,” said S. Donna.

In Their Own Words

“ISP means a great deal to me,” remarked S. Teresa. “I initiated this ministry and have been the coordinator in Dayton (one of the cities highest in drug use) since 2010. We provide retreats at Bergamo Center in Beavercreek, Ohio. Our teams have four to five facilitators at the retreats. I am privileged to work with women who come to the retreats which provide the spiritual foundation for them to stay on their path of sobriety.”

Joyce added, “I started with ISP two or three years into its existence. I was blessed to facilitate some of the retreat experiences. But the energy it took to keep up with the schedule became too much so I became the volunteer in charge of recruiting drivers to transport the women to and from the retreats and follow-up meetings. Numerous Sisters and Associates are team members or drivers.”

The Blessing of Walking with the Retreatants

The women have learned much from their experiences. “The retreatants have taught me about poverty of spirit,” S. Annie said. “Most of the women have experienced hitting rock bottom in their lives. It is from this place that they learn to rely completely on God. This total reliance on God is always an inspiration and a challenge to me. The women are inspiring examples of resilience and courage. I feel like I receive so much more than I give.”

Says S. Donna, “Mostly, I am aware that these women have suffered and have surrendered all in order to hopefully build a life for themselves. I often pray to surrender to God. I only have a glimpse of what that means – they know it in their being. I have also learned the resiliency of the human spirit.”

Joyce looks to their strength: “If I had been born into a different family, a different setting, I would not be able to handle what these women have handled. These are some very strong, gifted women who have been handed some very tough life circumstances. They happen to have addictions that have gotten in the way.”

“I learned we are all human, sharing the same desires for love, peace and happiness,” S. Teresa explained. “I am amazed at the resiliency of the human person to do drugs or alcohol, go to rehab, relapse, go back to rehab (for some many times), then become clean and live the sober life every minute of every day. I am overwhelmed at what retreatants have lived through and how they are survivors. It is a constant daily battle!”

Donna says that while we all know that there are homeless people, the experience in leading retreats puts each Sister face-to-face and in conversation with women who are homeless. It helps them to better understand their experiences.

“Most of my life I have entered into a ministry because someone needed to be there,” said S. Joyce. “It was not because I had training or experience. It is like a door of opportunity opening up. This is something I was invited to do. It is something I am able to do.”

Teresa affirms that their efforts do make a difference in the lives of the women. “Some call afterwards to seek help or just to talk,” she said. “The community that retreats generate is essential to build fellowship and support for each other. Those who have been sober for many years help those new to sobriety. I feel I am a constant in their lives and they know that I love them no matter what their past has been.”

The Sisters hope that attendees join the retreat team, dream that more women experience positive life-changing support, see continuing accompaniment by volunteers going into shelters or churches on a regular basis to share food and spiritual reflection, and desire facilitators who, like S. Annie, are younger.

The director of a shelter sending women to the retreats said that typically on return the women say, “What you have told us about, we have now experienced.”

“St. Elizabeth Ann Seton said: Faith lifts the staggering soul on one side, hope supports it on the other. Experience says it must be, and love says—let it be. I think the women could identify with the image of being a ‘staggering soul’ in their difficult journey of recovery,” says S. Annie. “Faith and hope are graces that help them to get through.”