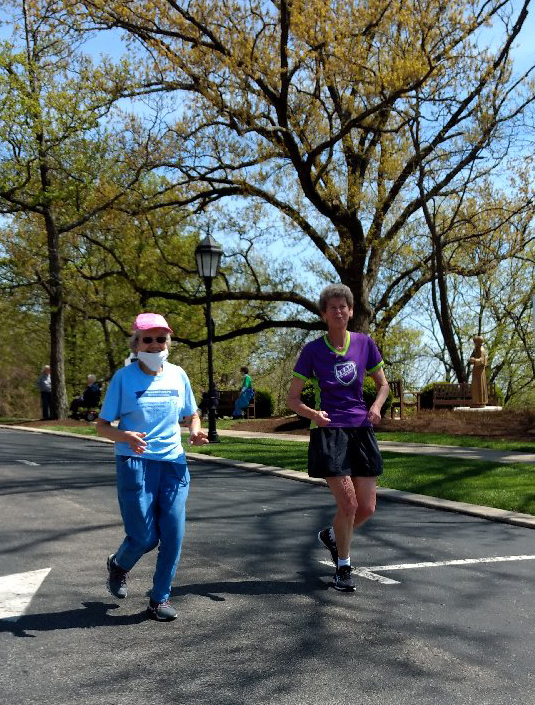 (From left) Sisters Joyce Richter and Sally Duffy participated in an Earth Day run/walk at the Mount St. Joseph Motherhouse in April. The two were able to use the event as training preparation for their individual virtual Flying Pig half-marathons in May.

As COVID-19 spread throughout the globe in the early months of 2020, tournaments, sporting events and large gatherings were cancelled or postponed. In the Queen City, the Cincinnati Flying Pig Marathon – held annually the first weekend in May and said to be the largest weekend party in town – was faced with a decision. Adhering to the guidelines of the CDC, the marathon was postponed until October 2020. Participants were offered the chance to take part in the Cincinnati tradition in the fall or they were also given the opportunity to create their own virtual race with the ability to track and submit results.

The Sisters of Charity have long been participants in the excitement, spirit and challenge of the weekend. Despite the changes this year, Sisters Joyce Richter and Sally Duffy and Associate Karen Martin have committed to taking part in the marathon, each raising funds on behalf of the Intercommunity Justice and Peace Center (IJPC) in Cincinnati. The three women describe their new experiences this year as they remain faithful to the event and IJPC.

Joyce Richter has been participating in the Flying Pig half marathon for the last nine years. S. Joyce says she mostly walks but sometimes jogs in order to add variety, improve speed and provide a different movement for her legs. She enjoys the excitement, fun and feeling of accomplishment when reaching her goal. “Cheering crowds, many with fascinating, encouraging and funny signs, families and their pets – they all boost our energy along the way,” she adds.

Some of these aspects were certainly missed when she completed her virtual half-marathon this month. S. Joyce walked one cool morning in May in the Price Hill/Delhi area using an app on her phone that tracked her miles. With her route mapped out, she built in hills as well as some flat areas. A little sore after, Sister said she was pleased with how the virtual event went – and her time was very good! 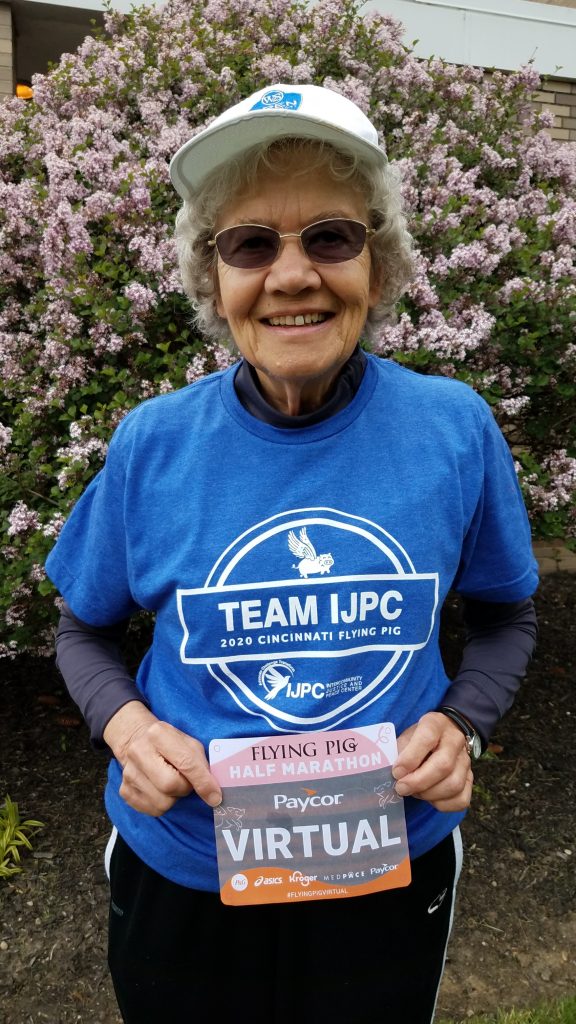 While the experience was new, one aspect that remained was the generous support she received from family and friends. Unaware of the partnership with IJPC the first couple years of participation, S. Joyce said once she learned she could walk for a cause she found walking more meaningful. And her loved ones agreed. “One woman donated $100 in honor of her mother who would have been 100 years old this year and who had been very involved in justice and peace work,” she recalls of this year’s support. “My brother gave generously and lots of others have given to this important cause. They believe in me and the justice and peace for which I am walking.”

For those interested in participating but apprehensive due to their age or physical limitations, S. Joyce says, “I did my first half-marathon when I was 77! It’s never too late to start!”

Like S. Joyce, S. Sally Duffy has participated in the Flying Pig in past years while raising funds for IJPC. At the request of the Intercommunity Justice and Peace Center, S. Sally began running the half-marathon at least six years ago, saying she enjoys knowing that it provides unrestricted donations that support the operations of IJPC and their mission. “IJPC is truly working to change systems and structures that keep persons and families from experiencing their God-given dignity.”

Sally ran the 13.1 miles on Friday, May 1. And while the energy and inspiration she usually receives from fellow runners and walkers, volunteers and spectators were not present, she used the miles to pray in gratitude to the people who have donated and for the people who benefit from being taken down from their crosses by IJPC’s advocacy efforts.

Sally has long been a participant in IJPC’s advocacy efforts, especially the need for comprehensive immigration reform and ending the current broken and unjust immigration system. “IJPC educates and advocates for peace, challenges unjust local, national and global systems and promotes the creation of a nonviolent society. It is supported by faith-based organizations and individuals who work together to educate around justice issues, take collaborative action and do public witness. … Supporting IJPC is an opportunity to participate in living the Gospel and bringing about the reign of God and right relationship for all.”

(From left) Karen Martin and her husband, Jim, joined the virtual IJPC Flying Pig Team for a 5k in Blue Ash on Saturday, May 9 as part of their training for the October race. Photo courtesy of Haley Huge, IJPC operations manager

Associate Karen Martin began her affiliation with the marathon as a volunteer. Working at a water station with colleagues, she said it was fun volunteering for a cause and observing the vitality and determination of the participants. She found herself intrigued to participate – excited to have a goal to motivate herself to increase the duration of her walks, to be part of an incredibly spirited weekend in Cincinnati and to raise money for a cause. In 2015, she became an active participant walking the half-marathon. “Something happens at the finish line, besides the relief of completion,” she said. “It is ‘wow,’ I did it and I will do it again! … Participating since 2015 has been invigorating, motivating and fun, fun, fun!”

Karen and her husband, Jim, were set to participate in 2020 but made the decision to postpone participation until October. Saying that much is still up in the air about the October event, Karen has imagined what the experience will be like if there are no crowds of volunteers and spectators. “I’m counting on lots of creativity from the organizers,” she said. “If this is virtual in October, I will depend on impetus from my imaginary and spiritual companions. I’ll bring a litany of friends, family, saints and angels! I’ll need a spiritual crowd.” 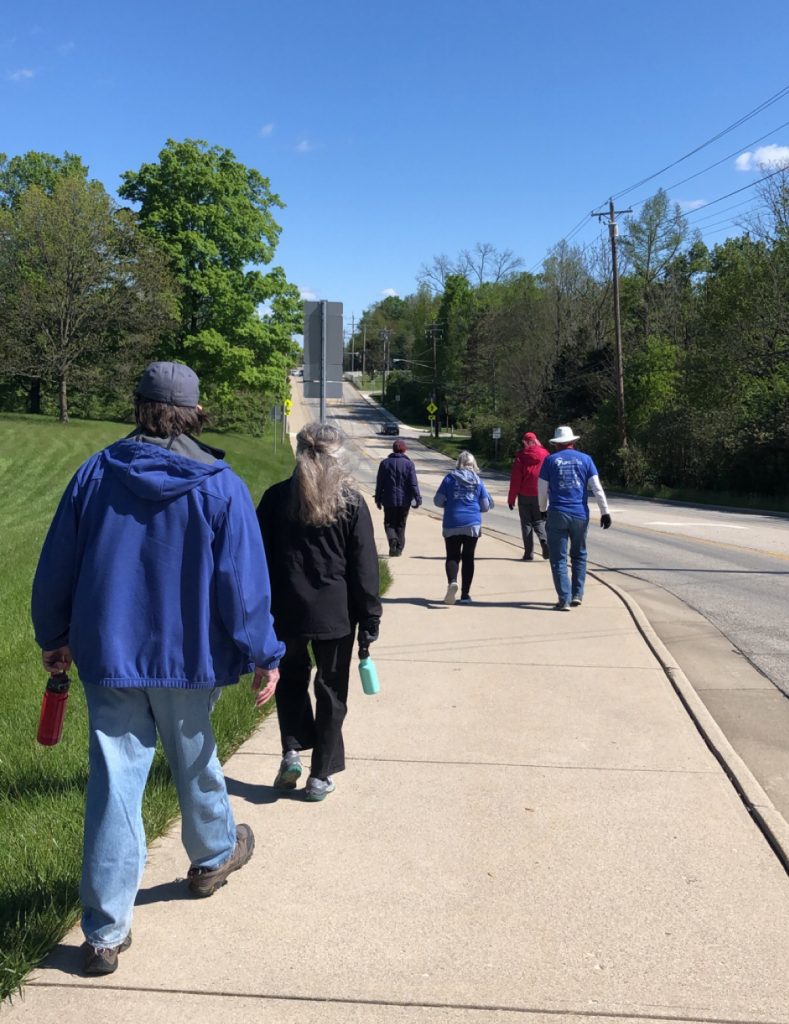 She, too, is fundraising for the Intercommunity, Justice and Peace Center. “IJPC works for all the important peace and justice issues that interest me,” Karen says. “It’s an easy choice to support an organization with committed people who minister for the needs that I believe are critical for a robust and vibrant local, national and global world. …

“We are all called to be good and caring citizens, to care for each other. Even before and beyond this COVID-19 pandemic, we are ‘in this together.’ There is only one world and we are obliged to make it equitable for everyone. I invite all my family, friends, and acquaintances to learn about and support the ministry of IJPC in whatever way they can. We all want to live in a wonderful world and we need to work for its safekeeping. IJPC can guide us in this endeavor.”

To learn more about the work of the Intercommunity Justice and Peace Center, please visit https://ijpccincinnati.org/.