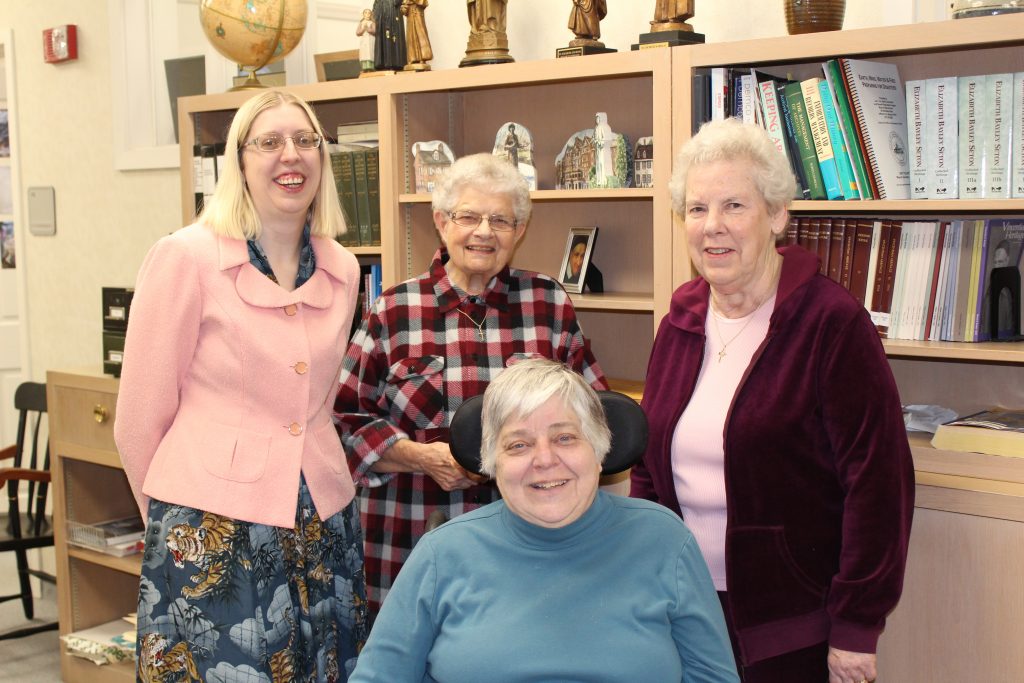 (Front row) S. Joyce Brehm, (Back row, from left) Veronica Buchanan, Pat McQuinn and Sheila Gallagher are a few of the valued members of the Sisters of Charity Archives.

Mark Twain once said, “History doesn’t repeat itself, but it does rhyme,” and the history of the Sisters of Charity has always been defined by its compassion and capacity for good to others. This history is preserved by the Sisters of Charity’s Archives, which has been praised for its organizational skills and service-oriented team of volunteers that cover a variety of topics. The SC Archives has a thorough work ethic to remember the Sisters that laid the groundwork for what the Congregation is today, which benefits the Community daily and remains an uplifting place to serve. 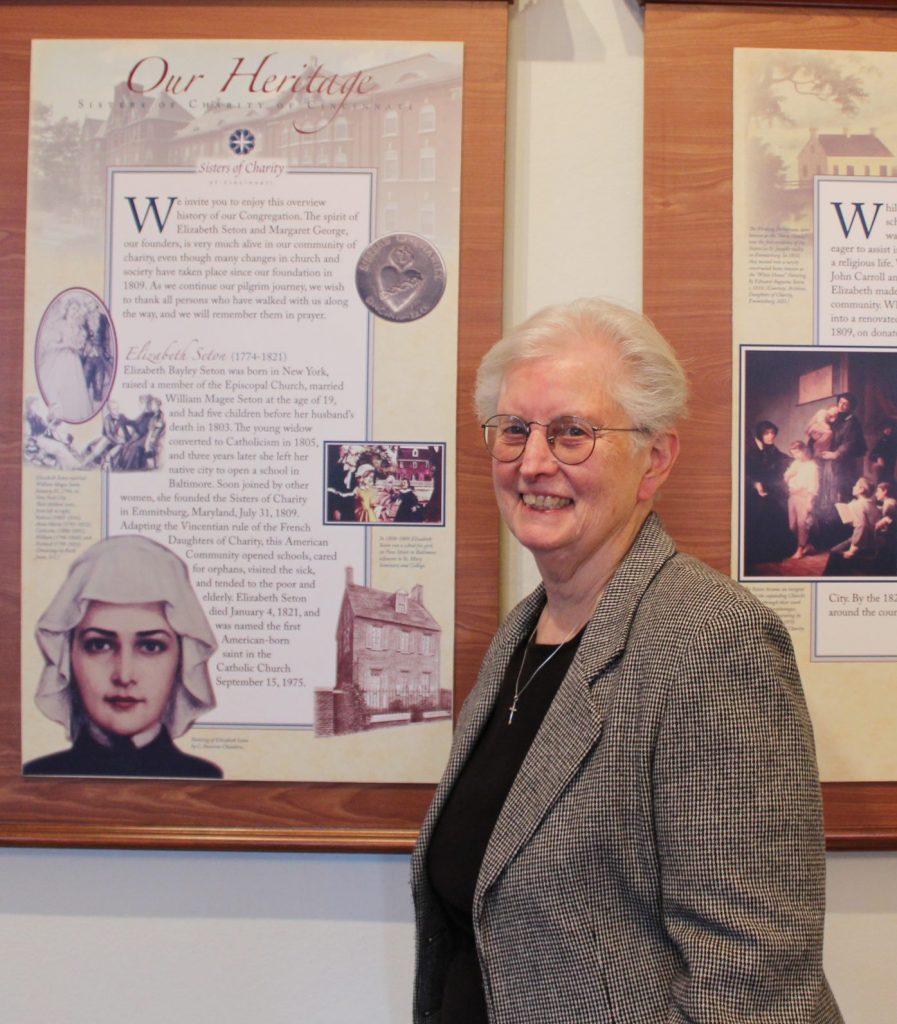 S. Judith Metz, the Congregational historian, is known for her dedication and service to the Sisters of Charity Archives.

In the past, managing the Archives of the Sisters of Charity was the responsibility of the Secretary of the Congregation, but only to monitor the missions and achievements of its members. When the position of Archivist was formally created, it was succeeded by notable Sisters throughout time, including S. Judith Metz who retired in May 2016. Not only was she renowned by her peers in the office, but S. Judith was even commended by many others for her work as the Archivist for the Sisters of Charity. “Dan Hurley, a journalist at WKRC in Cincinnati, Ohio, was the convener for a panel that I attended and when he was introducing me, he stated that the SC Archives was one of the best in the region,” S. Judith says.

While it is atypical to have multiple people working in one Archives office, the retired Sisters of Charity who serve there do so because of their desire to help. Because many of the workers in the office are Sisters retired from active ministry, the “staff” is actually made up mostly of volunteers, each with their respective responsibilities. The only current employee of the office is Veronica Buchanan who originally worked for the Archivists for Congregations of Women Religious, or ACWR, in 2013. After three years of seeing the Sisters twice a week, Veronica became enamored by the ministries and atmosphere of the Community. Veronica has been working for the Sisters of Charity for two years and is grateful for the volunteer staff’s work. “Everyone in the office encompasses a role,” Veronica says. “They’re doing oral histories, artifact inventories and processing photos. It’s rare to have this many people on board and we’re lucky to have everyone.” 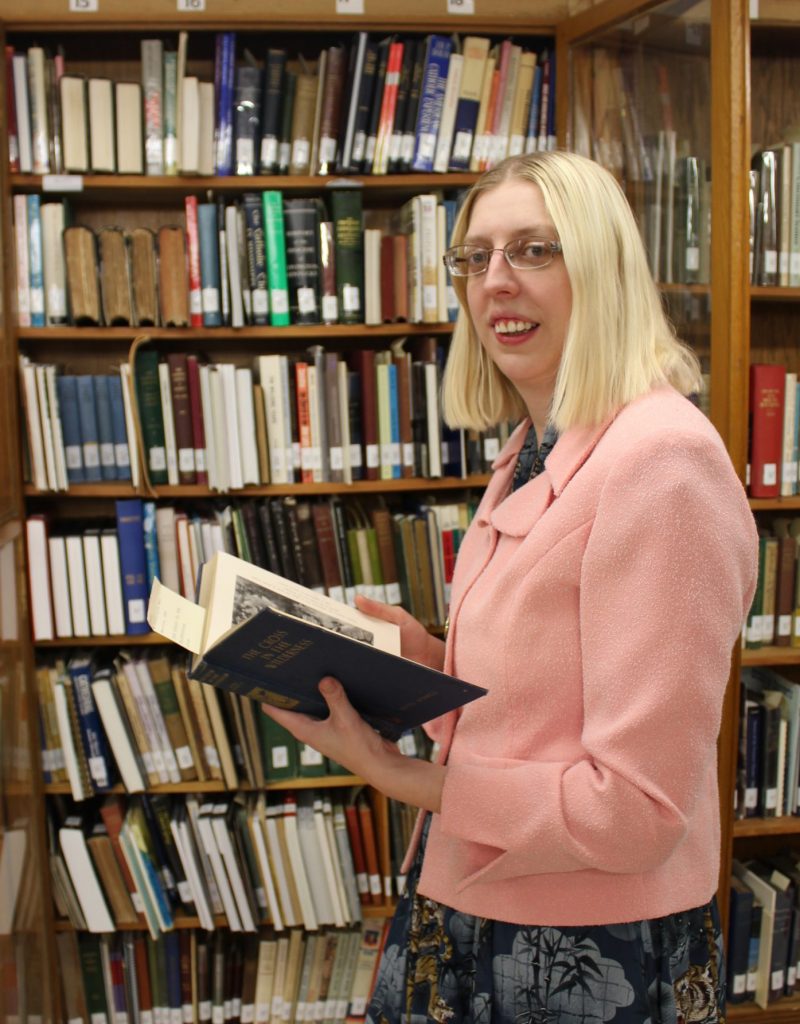 Archivist Veronica Buchanan leads the staff of Sisters in preserving the history of the Sisters of Charity.

Volunteering in this office does not require any historian or archival background, but this does not deter the volunteers from achieving the utmost quality and professionalism in their work. Former English educator S. Victoria Marie Forde’s work researching S. Blandina Segale, whose cause for sainthood is currently open in Rome, eventually landed her a position in transcribing the oral histories of the Sisters. In addition, S. Joyce Brehm has been offering her services to the office for more than a decade. Her work initially involved finding the ministries of deceased Sisters by looking at their file, but she had noticed that there were some things that needed to be done beyond that. She is currently involved with downloading video and audio into a digital form, a project that she undertook when she considered the benefits of doing it.

Other Sisters in the office, such as S. Sheila Gallagher, apply skills that were required in previous ministries. S. Sheila’s work in an alumni office at Holy Name High School in Parma Heights, Ohio, taught her to organize files and navigate computers. This greatly aided her in transcribing a list of the missions of each Sister of Charity in each year of the Congregation’s existence. S. Sheila began this project when she was researching the names of Sisters who used to minister at Holy Name, then was asked to assemble a list for other schools. She eventually decided to make an exhaustive list for each Sister of Charity since the Congregation’s beginning. “I’m currently on the year 1932,” S. Sheila says about her progress.

The methods of documenting the ministries of the Sisters of Charity has evolved as rapidly as the Sisters have taken up new services. Taking note of these services has been documented carefully by S. Mary Lucia Dudzinski, who gathers documents and sorts files for the Archives to make them readily available. In addition to this method, it is only natural that Archives took the next step to trace the Sisters in time: digitizing their materials. S. Pat McQuinn is at the forefront of this effort as she is in charge of scanning photos to make them digitally accessible, which has become vital to the success of other parts of the Congregation. “Before I knew it, I had boxes and boxes of photos to scan!” S. Pat says.

In her volunteer ministry in the Sisters of Charity Archives, S. Pat McQuinn has been responsible for scanning photographs to make them digitally accessibly.

This group has made the Archives a pillar of the Congregation because of their constant updates to their materials and their partnerships with the other offices of the SC Motherhouse. Collaborating with the SC Communications Office has been one of the functions of the Archives, as their materials can offer story ideas for both print and electronic media. The creation of social media has allowed the offices to collaborate and make weekly posts such as Memory Monday, Throwback Thursday or Flashback Friday. “I frequently collaborate on projects with Archives,” says Michelle Bley, the graphic designer of the SC Communications Office. “They are always ready to help and share their knowledge with me. Our combined skills produce a more successful outcome.”

Preserving the past acts as a preferred method of ensuring a sound future, the rich history of the Sisters of Charity is one of many ways to honor the memory and spirit of the Sisters who have died. Because of this, the office has found its way to pay tribute to the late Sisters. Perhaps S. Joyce’s favorite part of her service is compiling past footage of Sisters with dementia or depression. Sisters with these afflictions tend to respond to these videos happily as seeing themselves in video and pictures of their ministries creates a feeling of nostalgia. “I’ve made six videos in a month for Sisters who have dementia,” S. Joyce says. “They can be seven or eight minutes long, but it means a lot to them. Seeing them perk up and smile is worth it.”

To the staff of the Archives, the most admirable quality of the previous Sisters was their strong faith. In fact, Veronica felt so inspired by these women that she eventually became an Associate of the Congregation. Not only has the office been a source of inspiration for Veronica, but it has also been a source of great joy to them due to the energy and rapport of the entire volunteer staff. “We used to go to national meetings for Archives,” S. Victoria says. “One year the materials we received stated that the Archives of each congregation trace Christ’s footsteps through time. That really put into perspective for me the gravity of what I was doing in Archives and something that we all live by.”