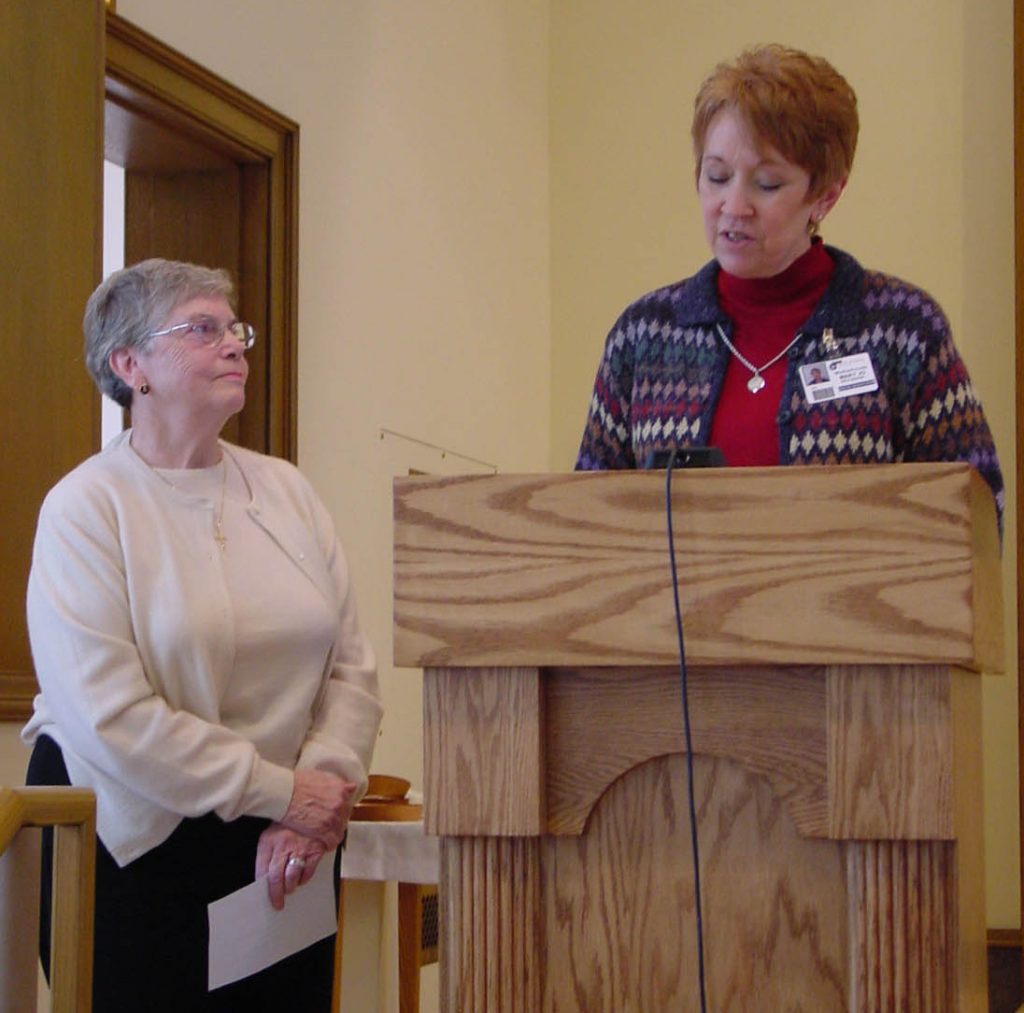 Lifetime Associate Pat Schloemer (left) made her initial commitment of association in 1989.

A native of Cincinnati, Ohio, Lifetime Associate Pat Schloemer says that it was a faith-sharing group at her parish, St. William in Price Hill, which led to her eventual relationship with the Sisters of Charity Community. Left desiring more, a dear friend from the group told her about the SC Associate program, and soon after, Pat’s new journey began.

Pat’s initial association with the Community began in her younger years. Her aunt, S. Mary Clotilde (Katie Higgins), was a Sister of Charity of Cincinnati and she recalls regular Sunday visits to the Motherhouse and spending much of her childhood there. Raised by a strong Catholic mother, Pat says her mother would ask her to remember as much as she could from the Sisters she met and then relay that information back to her. This was a habit that Pat carried with her throughout life, keeping an attentive ear to others concerning her faith.

The widow, mother of five and grandmother of 11 reconnected with the Sisters of Charity while working as the librarian at St. William’s Grade School. During her 25 years at the school, Pat became acquainted with many Sisters of Charity, including the late S. Barbara Huber, who greatly aided her on her journey towards Association. “She offered me different readings with which to pray and ponder every week,” said Pat.

“I know the Lord led me to this relationship with the Community,” Pat said at the time of her 25th anniversary as an Associate. “I have known the support of many friends I have made and have felt the power of their prayers offered for me and my family during some difficult times.”

Making her commitment as an Associate in 1989, Pat says her early years as an Associate were busy with family, aging parents and then the death of her husband. Throughout those years Pat said she had “my Sisters” to pray and walk with me. Their support and availability when she needed it most was a comfort along the way. She also found a true connection with founders Elizabeth Seton and Mother Margaret George, who were also widows. “Mother Seton and Mother Margaret were wonderful examples of going through all this with the Lord’s help and were a source of great strength.” She added that Elizabeth’s love of the Eucharist and Sacred Scripture and her letters helped Pat to look at the challenges coming into her life as she would have.

In her retirement years Pat has enjoyed volunteering, which has included visiting with Sisters at Mother Margaret Hall weekly, taking Eucharist to those who can’t attend Mass. “Seventeen Sisters lived at St. William convent when I was librarian,” she said. “Many of them are at the Mount now. So, it feels like a continuation of what was started back then. I look around the chapel and think about how many lives have been touched by them and I am overwhelmed.”

She also enjoys the opportunity to step back, catch up on a book, travel, and most of all, ‘be.’ Retreats and days of prayer at the Motherhouse have been high on her priority list.

Grateful to the many Spirit-filled women who guided her through the years, Pat says making her lifetime commitment to the Community was an extension of the commitment she made 31 years ago. “I have so much to be grateful for, especially for [the Sisters],” she concluded.