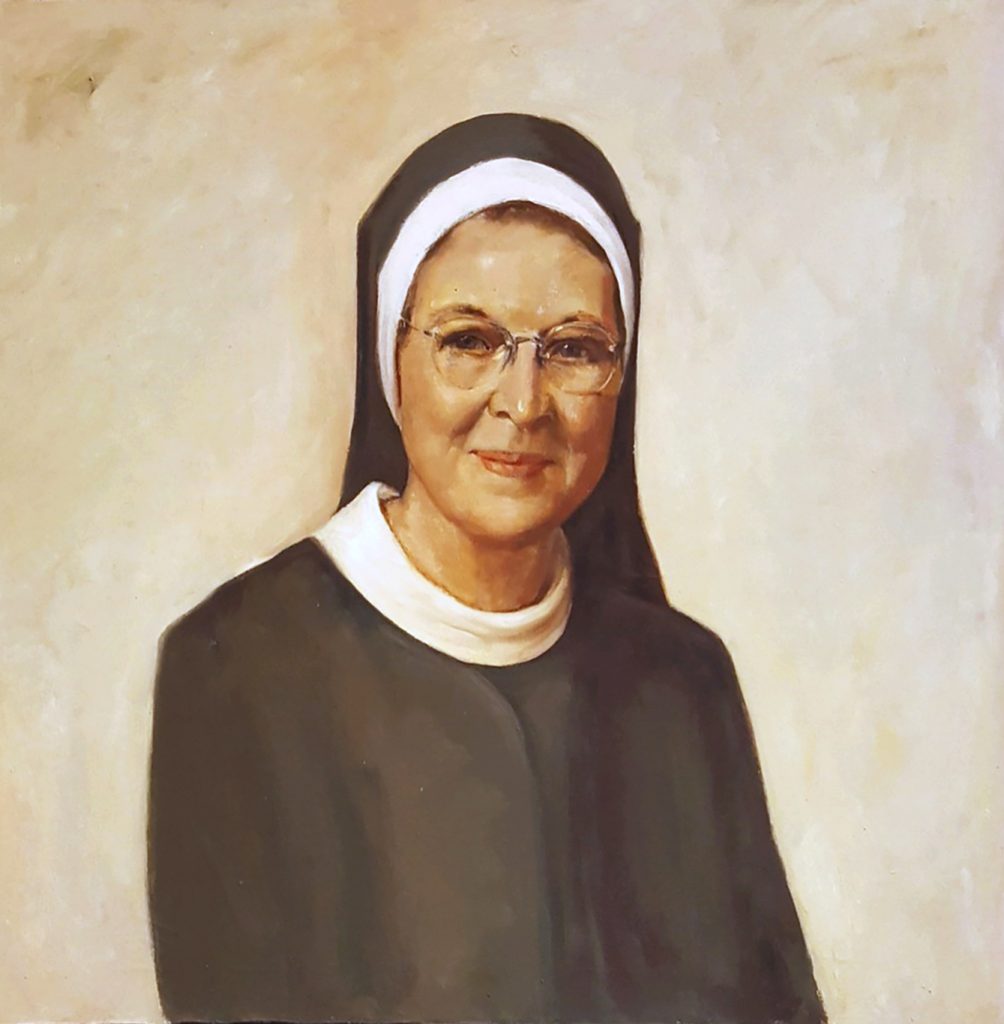 Adele Clifford’s portrait, created by S. Augusta Zimmer, confirms the testimonies of her colleagues. One spoke of her as “a woman of keen intelligence, remarkable ability, and thorough dedication to her vocation and profession: a woman of faith, of prayer; a woman of action and courage, shrouded in apparent meekness and gentleness.”

A Sister-companion called her “a true friend, gentle, concerned for everyone she met, and gracious to all.” Another described her as “quietly, unobtrusively, meekly, courteously – as on tip-toe – she went through life.” S. Adele did live an unobtrusive life until she was thrust into the spotlight by succeeding S. Maria Corona Molloy as president of the College of Mount St. Joseph at the age of 61.

Educated by the Sisters of Charity at St. Mary’s Elementary and High School in Chillicothe, Ohio, Mary Clifford then attended a year at the College of Mount St. Joseph before entering the Community in 1925. She spent her early years teaching at schools in Cincinnati, Cleveland, Springfield in Ohio, and Royal Oak, Michigan, before teaching mathematics at Mount St. Joseph Academy. In 1942 S. Adele joined the faculty of the College of Mount St. Joseph where her students admired and sought to emulate her “highly professional teaching,” and credited her with having a great effect on their own careers. All the while she was pursuing an undergraduate degree in mathematics, and advanced degrees in biology from Fordham University in New York. She also did post-doctoral research at Woods Hole Marine Biological Laboratory in Woods Hole, Massachusetts.

Appointed president of the college in 1967, S. Adele assumed leadership in an era of student unrest, spiraling expenses, and declining enrollment for many private liberal arts colleges and universities. Helping the college meet these challenges, she appointed the Mount’s first lay academic dean, and reorganized the admissions staff. In addition, she set new directions in financial management, formed a tri-partite council of student-faculty-administration to advise her in setting directions for the college, and established an associate board of lay trustees.

On the academic side, S. Adele oversaw major curriculum changes, appointed a director of continuing education, and approved the establishment of degree programs in religious studies and early childhood education. Looking to the future, she approved the installation of a computer terminal facility that provided all students with the option of learning basic computer programming.

After five years in the president’s office, S. Adele was ready to return to her beloved biology lab. When asked what she would do on her last day as president in 1972, she replied, “I think I’ll probably get up from my desk, walk out the door, and close it very slowing behind me.” Her response exemplifies a tribute written at the time of her death, when retired professor Thomas Seibert said of her, “She always seemed independent of the positions she held and of the successes she achieved. … She was unfailingly kind, always willing to listen to other people, always genuine in her support and positive in her suggestions – and of course, always ready with a smile.”