Staving Off Homelessness by Preventing Poverty

(From left) Associate Therese Frye and S. Noreen Ellison serve side-by-side at their parish conference of the St. Vincent de Paul Society, changing lives and bringing the spirit of the SC Community with them.

A woman named “Felicia” and her three children were facing eviction from their apartment in Detroit, Michigan. After being turned away by several agencies, the family approached the St. Vincent de Paul Society. At first, Sister of Charity Noreen Ellison and Associate Therese Frye admitted that their conference’s funds could not cover the overdue rent, but Therese persisted to make a payment plan with Felicia’s landlord while S. Noreen stayed with Felicia and prayed.

Homelessness is an issue that affects the global community, but working to prevent it from happening is equally important. S. Noreen and Therese demonstrate how a relationship-based organization like the St. Vincent de Paul Society can offer hope to those threatened by homelessness. Though the issue can be overwhelming, these two are given strength by each other’s efforts while combating this issue at its core.

Therese first learned about the St. Vincent de Paul Society as a child after her father’s death and through clothing drives at her grade school. She later reconnected with St. Vincent de Paul Society as an adult through her parish, Shrine of the Little Flower in Royal Oak, Michigan. In 1992, Therese joined the parish’s conference, which she attributes to her spirit of service. “Being a nurse, I have a heart for service and that has helped me want to serve others who experience the different types of poverty,” Therese says.

Noreen was the pastoral ministry representative of Shrine of the Little Flower before she retired from active ministry in 2015. However, Therese convinced S. Noreen to continue her service with the organization as a way to honor the charism of the Sisters of Charity. “I agreed to become the associate spiritual advisor for the Detroit area,” S. Noreen says. “And since Therese has become an Associate, her partnership in our services has been a wonderful gift to me.”

Noreen and Therese have served side-by-side at various organizations, such as the Blessed Rosalie Rendu Conference of the St. Vincent de Paul Society, which serves those in poverty in the inner-city area of Detroit like Felicia. However, the duo also have their own unique ministries: Therese is currently a board member of several councils of the St. Vincent de Paul Society and of the Matchan Nutrition Center Soup Kitchen in Pontiac, Michigan; S. Noreen, while still contributing to organizations like these, also keeps the spiritual aspect of the service alive in the volunteers. As the associate spiritual advisor, she encourages volunteers to reflect on their experiences to see where God is calling them in their lives. By doing this, S. Noreen feels that she is adhering to the charism of the Sisters of Charity, but also to the mission of the St. Vincent de Paul Society. “Both organizations have the same charism of charity,” S. Noreen says. “We honor the charism of the Sisters of Charity the Vincentian way.” 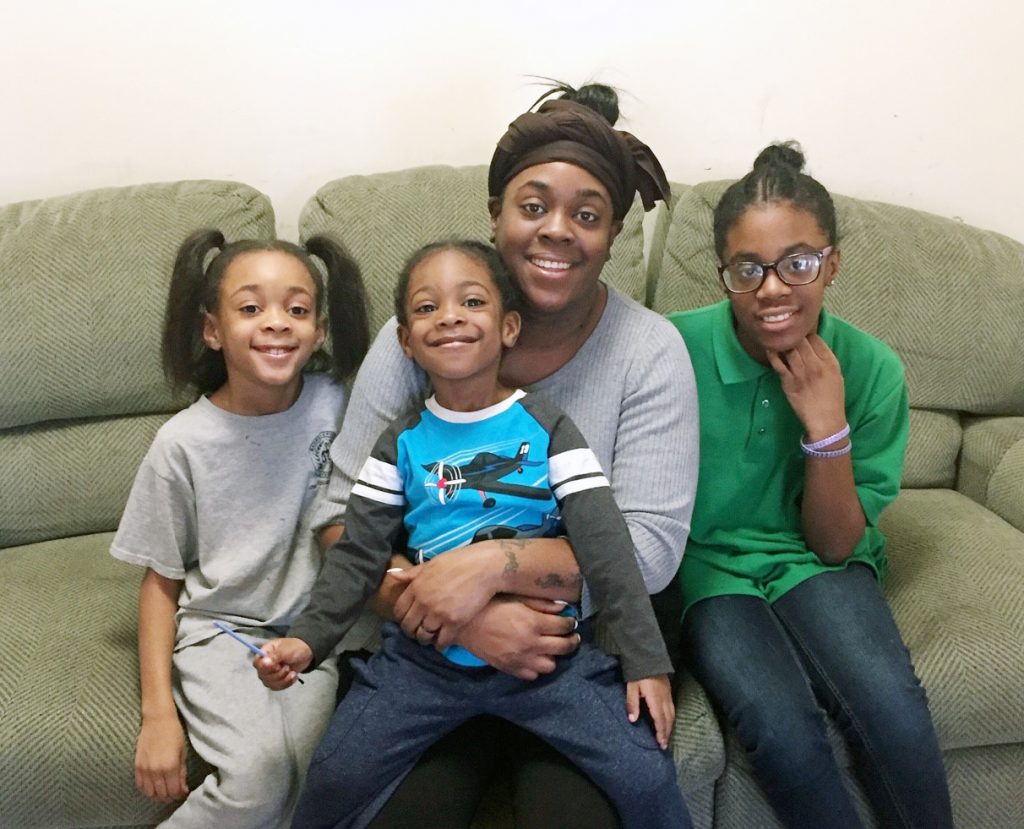 Felicia and her children were recipients of the tireless efforts of the St. Vincent de Paul Society.

Felicia and S. Noreen’s prayers were answered when a check arrived to cover her rent and she was offered information for a new job. An anonymous donor of the Blessed Rosalie Rendu Conference wanted to help a family in need, and Felicia’s family was the one who received this gift. S. Noreen says, “After a tearful time of thankful prayer, and a brief visit with the children who had come from school, we drove Felicia to the Management Office where she presented the check, drew a huge sigh of relief and beamed a broad smile.”

Just as the Sisters of Charity charism is enhanced by their Vincentian service, so, too, does S. Noreen feel enriched by her friendship with Therese. Cases like Felicia’s are happening every day, and S. Noreen and Therese are working tirelessly to make sure that those threatened by homelessness can wear the smile that Felicia wore by the end of her interaction with the St. Vincent de Paul Society.