Daring to Risk a Caring Response: The Sisters of Charity’s Service during the Spanish Influenza Pandemic 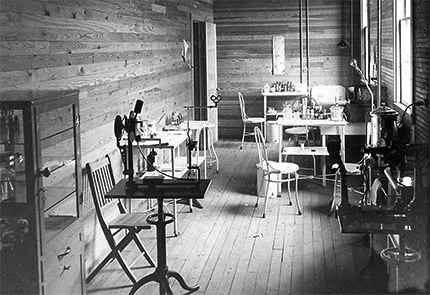 Camp Sherman suffered the highest death rate of any United States army camp during the flu epidemic. Pictured is the camp’s medical exam/treatment room. Image courtesy of the Henry R. Winkler Center for the History of the Health Professions, University of Cincinnati Libraries.

The following article was originally written and published in 2018.

In the late summer/fall of 1918, the United States Health Services had reports from 45 states about a virus that had begun sweeping the nation. Called the Spanish Influenza, schools, theaters, and churches across the country closed, and emergency hospitals were established when other hospitals could take no more patients. Fast-forward to 2020, and a new global pandemic has spread with a similar astonishing speed.

The Sisters of Charity, who embody a legacy of service and caring for others, met the challenge presented by the flu epidemic. A troop of courageous, compassionate women, the Sisters offered their assistance in caring for flu victims wherever they were—Hamilton County, Cleveland, Marion, Springfield, Lima, Dayton, and Middleton, all in Ohio; Jackson and Lansing, Michigan; Colorado; and New Mexico. Despite most Sisters not being professionally trained nurses, they helped in whatever way they could, and during the flu’s rampage, about 135 Sisters were reported to have assisted.

In the state of Ohio, the Sisters were particularly active. In Cincinnati, there were Sisters at Good Shepherd Convent and Price Hill, and another two volunteered in Hyde Park. More were at Seton Hospital, where one Sister noted, “As fast as new patients were brought in, the dead were taken out.” Others spread throughout the city to serve the numerous sick and dying. In Mount Adams, despite schools across the country being closed, S. Maria George Brady kept hers open so that students might graduate. 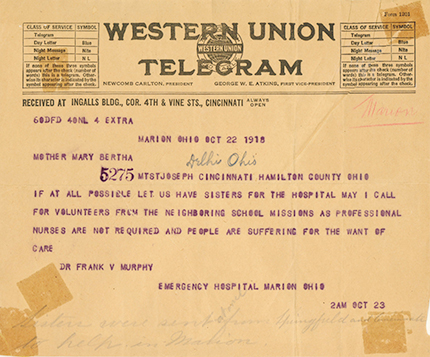 Hospitals lacked sufficient staff to care for all their patients, so doctors, like Dr. Frank V. Murphy, sent telegrams (pictured) to the Sisters asking for assistance.

Outside the city, the Sisters’ ministry continued across the state. Sisters from Cedar Grove Academy (Cincinnati) traveled northeast to Marion, Ohio, where they tended the ill in an old nursing home that had been converted to a hospital. Also to the northeast, in Washington Court House, Ohio, the Sisters were called to serve in the home of Dr. Fostich Jones who had ill family he could not attend. After, he was so moved by the Sisters’ devotion to his family that he donated $500 to the Sisters’ hospital.

In addition to serving in hospitals and private homes, the Sisters attended the sick and dying of the army camps. Camp Sherman, located in Chillicothe, Ohio, had the highest death rate of all the army camps in the country, and when the flu was at its peak, the camp suffered about three deaths each night for two weeks. S. Mary Alice McFarland, the sole night shift nurse, cared for 55 patients during the three-month-long epidemic.

To the south, in Kentucky, the Sisters continued to provide assistance and care for the sick. Groups of the strongest, most capable Sisters traveled to the eastern Kentucky coal fields, where few dared venture. In fact, in the call for Sisters to volunteer, they were warned that the conditions of the mining towns would be terrible and not all should volunteer. Twenty Sisters eventually answered the call, and they all spoke of the horrors of the mining towns, most notably the lack of sanitary conditions.

Large, open medical wards housed dozens of patients at Camp Sherman. Image courtesy of the Henry R. Winkler Center for the History of the Health Professions, University of Cincinnati Libraries.

And in the Kentucky backwoods, similar accounts of poor conditions persisted. One Sister—S. Leonora Daneiffe—reported caring for a dying mother and her family, and one cold day, the father expressed his wish to bring his horse inside the house. S. Leonora said ‘no,’ and when the man persisted and actually tried to bring the animal inside, tiny S. Leonora took the gun from above the fireplace, pointed it at the man, and said that if he brought that horse inside, she would shoot. Needless to say, the man did not bring in his horse, and S. Leonora continued her duties of caring for the sick.

The ministries of the Sisters extended beyond the tri-state, too. Reports from Sisters in Colorado provided similar stories to those of Ohio and Kentucky. One Sister reported caring for a ward of sick patients when her mask slipped. A patient saw her exposed mouth, smiled, and said, “I’d get better if I could see a smile like that.” 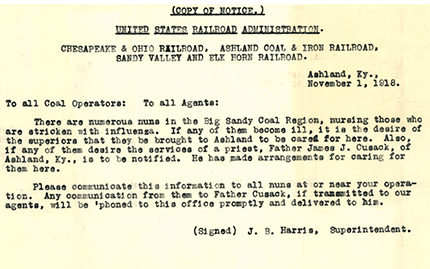 In Kentucky, Sisters who contracted influenza were required to return to Ashland, Kentucky, to be cared for.

More than 100 years after the Spanish Influenza, we remember and acknowledge the Sisters whose role in history was important for the care they gave and courage they embodied during such a critical time. They were the unexpected heroes. And to the many first responders and health care heroes in 2020 who have spent tireless hours caring to the sick and ensuring the safety of our loved ones – thank you! We are most grateful.