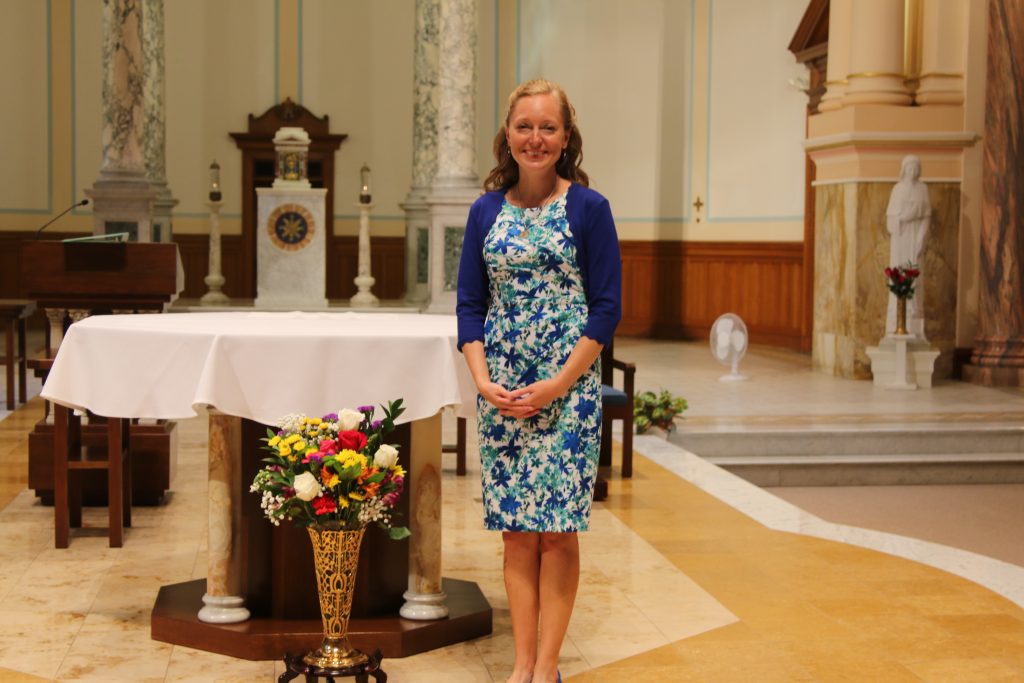 Sister of Charity of Cincinnati Tracy Kemme professed perpetual vows during a Communion service on Saturday, July 25 in the Chapel of the Immaculate Conception at the Mount St. Joseph Motherhouse (Delhi Township).

Due to the current precautions, a small group was present with Sister Tracy in the chapel for the ceremony. In their presence she vowed to “freely and whole-heartedly commit myself for life to the service of God, God’s people, and all of Creation as a member of the Sisters of Charity of Cincinnati. To witness to the Reign of God and to make Christ’s love incarnate in the world, I freely promise to live in community, and I vow to God poverty, consecrated celibacy and obedience according to the constitutions of the Sisters of Charity of Cincinnati.”

Although the pandemic certainly complicated the preparation and planning of her final vows, Sister Tracy wrote to her congregation, “Through the ups and downs, God’s call and my desire to respond with my whole being have deepened and intensified. I feel joyful and free about saying ‘yes’ to be a Sister of Charity for life, even if the ceremony looks different than we’d hoped.”

Friends of the Sisters of Charity Community were invited to join the ceremony through livestream. A Mass of Thanksgiving and reception will take place at a later time.

Sister Tracy grew up in Fairfield, Ohio, and graduated from Roger Bacon High School. Her childhood parish is St. John Neumann. She earned her bachelor’s degree in psychology and Spanish from the University of Dayton, after which she served two years with the Rostro de Cristo volunteer program in Ecuador.

Sister Tracy entered the Sisters of Charity of Cincinnati in 2012 and made first vows in 2015. Along with ministry in Latin America, she has served in various pastoral and justice ministries at the U.S.-Mexico border and in Cincinnati. Most recently, she worked at the Archdiocese of Cincinnati’s Catholic Social Action Office, focusing on immigration reform efforts, and she was the Bilingual Pastoral Minister at the multicultural Holy Family Parish in Price Hill.

Currently, Sister Tracy is pursuing a Master of Divinity from Chicago’s Catholic Theological Union. She lives with three other Sisters of Charity at the Visitation House community in Cincinnati. Following profession of final vows, she will be part of the Sisters of Charity Vocation Team and will minister at a local Cincinnati parish.

CLICK HERE to view more photos from our photo gallery.