“Take every day as a ring which
you must engrave, adorn, and
embellish with your actions,
to be offered up in the evening
at the altar of God.”

Finding the Good in Difficult Days: Sisters and Associates Reflect on a Pandemic 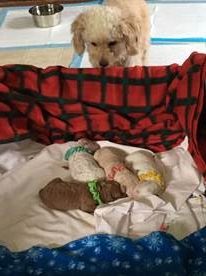 What did we do during the pandemic? Sisters Winnie Brubach, Mary Caroline Marchal and Mary Beth Orr became midwives (or midwoofies) for a lovely little dog named Sassy.

One of S. Mary Beth’s grooming clients raises miniature goldendoodles. She had gone through a rough and contentious divorce and became homeless. Her friend ended up with six of her dogs. Mary Beth was asked if she could find foster homes for the dogs until her client got back on her feet.

Two dogs were fostered out after an email plea for help. SC Associate Renee Deisel took Piper, a 6-year-old female who was going to be up for adoption because she was being retired from breeding. S. Winnie Brubach took Sassy, who was two weeks pregnant. The gestation period for dogs is nine weeks. On May 17, 2020, S. Winnie called her troop of midwoofies into action. Since the three of us had never helped deliver puppies before, we were relying on Sassy who was 3 years old and had experience! First born was George at 10.3 ounces, then came Francie at 10 oz., and finally came another male named Cricket at 11 oz. As we breathed a sigh of relief and it seemed Sassy had finished delivering her pups, Sisters Mary Caroline and Mary Beth went home for the night. 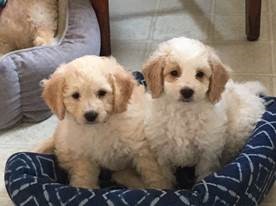 The next morning, the two were each greeted with a text message and a picture of the pups from S. Winnie – but something had changed. Instead of three puppies, the picture contained four! It seemed that Sassy wasn’t finished. At 1 a.m., S. Winnie helped deliver a girl whom she named Rua, an Irish word meaning ‘red.’ This pup, the color of an Irish setter, weighed in at 9.5 oz.

Mom and puppies spent the rest of the morning and day resting and feeding.

The whole experience humbled all of us, that this 15-pound mother dog was the calmest female in the room and knew exactly what to do to care for her brood. The gift of life, especially during this time of death, riots and unrest, is an awe-inspiring experience and gives us some unbridled joy. We all will miss these furry balls of energy that have developed their own personalities and places in their pack.

George, the first born, is the most vocal of all the pups, he has a lot to say about everything. Francie, who is more often called Frances, is the little instigator of the pack. She is very curious which gets her and sometimes her siblings in a bit of a pickle. Cricket, who is the smallest, is our brave little man. He does not back away at new experiences and is the first to confront the new in his life. He is our little braveheart and his nickname is “The Bruce”. And last but not least is our surprise pup, Rua, who has made herself the leader of the pack, an alfa female! 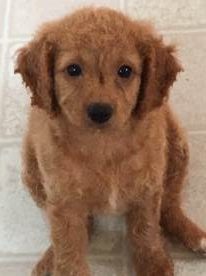 After a surprise arrival, Rua was the last puppy born to Sassy. 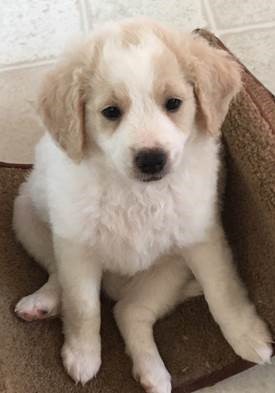 George was the firstborn of the litter.

This experience of new creation of life was a wonderful distraction during the unknown new reality that we all face today and it was also a lesson in trust, hope, and love. At the time of the writing of this article, July 19, 2020, two of the four have found new homes. George will be a therapy dog for a young college student. He is perfect for this new role. Rua is home with a young family and has a lovely little girl to fuss over. Francie and Cricket will go to their same new home by the end of July and life for S. Winnie will be a little less hectic and a lot more boring. Well, maybe not, as Sassy will stay with her! At their leaving they are well over 6 pounds and healthy, happy dogs.

What a privilege to witness nature “up close and personal” and juxtapose new life at a time when so much is changing around us. Some things never change!