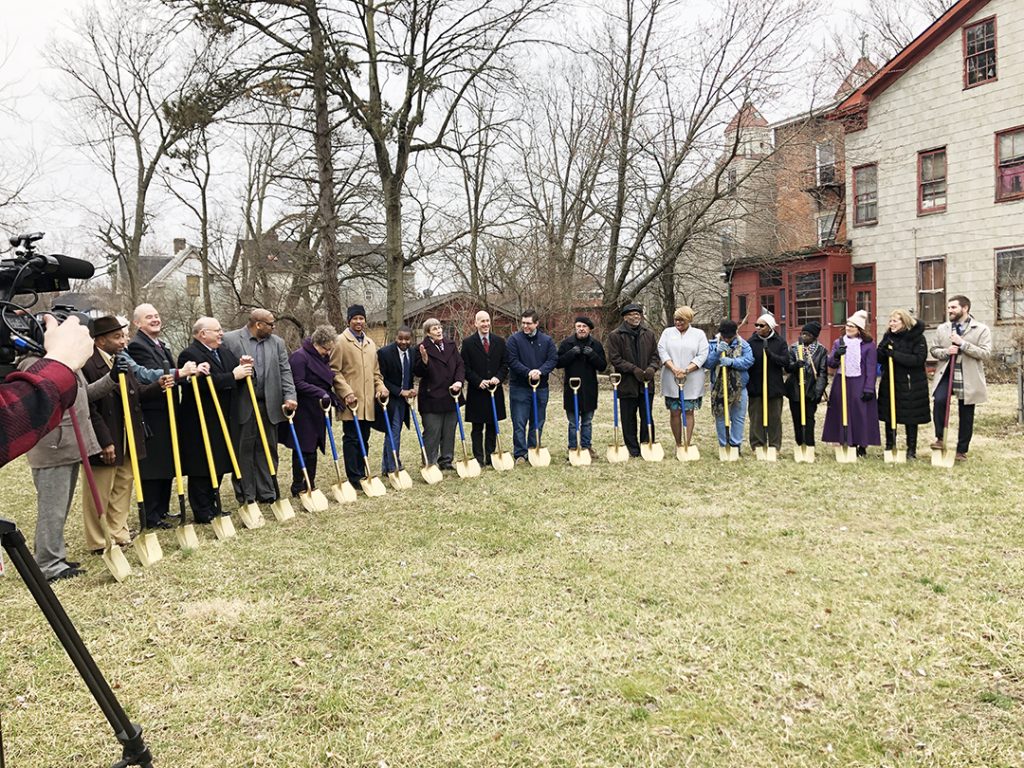 Empowering people to make informed choices for themselves and their neighborhoods through community building, home ownership, and economic learning has long been the mission of Working In Neighborhoods (WIN), the nonprofit organization formed to help low- and moderate-income residents in Cincinnati’s neighborhoods. At the heart of WIN’s mission is its ability to create environments where neighbors can speak for themselves and gain a voice in issues directly affecting them.

Sisters Barbara Busch, Whitney Schieltz, Brenda Busch and Annette Muckerheide minister in either full-time or volunteer roles at the organization and took the time to provide insight into the organization’s efforts to help their residents develop strategic plans that build toward positive change for themselves, their families and their neighborhoods.

Working In Neighborhood’s mission is as relevant today as it was 40 years ago. S. Barbara Busch is the organization’s executive director and co-founded WIN in 1978 as a result of her former ministry. As a social worker with Catholic Social Services, S. Barbara saw the need for a Cincinnati organization that trained people to advocate for themselves and to address the bigger issues leading families into the cycle of poverty, such as a lack of affordable housing, skyrocketing utility rates and a shortage of living-wage jobs. Homeownership emerged as a key focus. “We were working on the principle that residents should take ownership of their community – it became apparent they needed to own their own property to do that,” S. Barbara said in a previous interview. “Communities needed homeownership to create stability.”

This vision expanded through the years as it became clear and necessary to provide residents with the knowledge and resources needed to allow them to make informed choices. Housing Coordinator S. Whitney Schieltz explains, “WIN’s holistic approach to community development is a major ingredient for success. WIN also focuses on issues regarding financial literacy, sustainability and energy education, health and fresh food access, beautification and safety, walkability and transportation, youth education and engagement, job training and employment. Building or fixing up a house may provide a roof over a family’s head but it takes a lot of other elements to improve their quality of life. Additionally, while WIN does provide direct services and some immediate aid, our main focus is on systemic changes and personal empowerment.”

According to WIN’s website, research throughout the U.S. and in the surrounding community demonstrates the measurable improvements in health, education, community safety, stability and wealth generation due to increased homeownership. This is why it is most important for the staff at WIN to listen to their residents and to help them develop strategic plans that build toward that positive change.

Barbara says, “All of WIN’s services have emerged from requests from our people. … The people know best what will work in their own environment. A shared goal brings people together.”

It is the strong, well-trained, well-organized residents and community leaders that come out of the process that propel communities into the future. WIN is there to give them support; its ability to build partnerships with banks, governments, corporations and organizations that can provide essential resources to residents is fundamental to success.

In her role as executive director, S. Barbara uses her voice and stature in the community to advocate for housing and economic justice in local, regional, and national forums. In addition S. Barbara praises the hard work and dedication of staff members, who are faithful to the organization’s mission and support its commitment to justice. WIN works closely with local groups and neighborhood associations like the South Cumminsville Community Council. And through its housing counseling and financial literacy program, the organization has developed partnerships with organizations like Legal Aid, as well as several financial institutions and local Community Development Corporations.

WIN’s sister organization, and until recently led by S. Barbara, Communities United for Action (CUFA) has also been essential in working with the organization to see change. Focusing specifically on social justice issues that overlap the work of WIN, CUFA leaders, neighborhood leaders and citizens have partnered together to build a better future for all. “Community organizers need to have a willingness to work hard day in and day out; victories over corporate greed are very hard to achieve. But they do happen – and they give us the strength to continue the work of bettering ordinary peoples’ lives!” said S. Brenda.

Trust is another key factor in the organization’s ability to help residents achieve their goals. S. Brenda, who ministers to potential and current homeowners, says, “Trust takes years of hard work, numerous conversations and misunderstandings, tears and laughter to build relationships in a local community. When WIN and S. Barbara are involved in a project the men and women of South Cumminsville know it is aimed at making their community better (even if they can’t see it immediately).”

“People know that the community’s best interest – not profit – is at the heart of every WIN project,” added S. Whitney. “Even in other neighborhoods where WIN does housing development (currently our target area includes College Hill and Northside) people have taken notice of WIN’s commitment to quality affordable housing, and we will receive calls from property owners and real estate agents when a lot or a house is for sale because they know and trust WIN.”

Working In Neighborhood’s commitment and persistence are visible in every program initiated by the organization, even when obstacles stand in the way. As part of the South Cumminsville Out of Poverty in a Generation Initiative, WIN’s 50 Net Zero Urban Village project includes 50 near net zero homes – 25 energy-efficient homes for senior home owners and 25 near net zero new homes including solar units. S. Barbara explained the intention was to fund the project through the organization’s advocacy for the Clean Air Act, which included funding for energy conservation and solar housing development in communities of color. When the EPA changed direction, WIN had to develop new sources of funding. That persistence paid off, and by the end of 2020, they will have completed 20 of the 25 senior home rehabs in phase one and begun the construction of seven new near net zero homes. 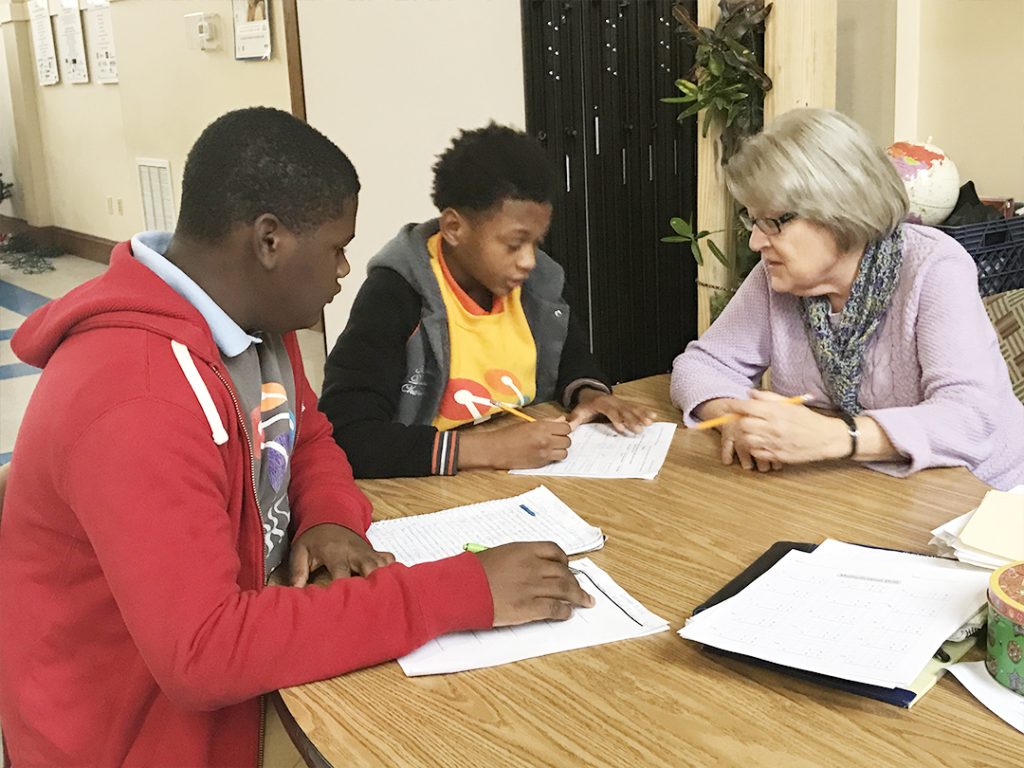 S. Annette Muckerheide is responsible for WIN’s after-school program for children in the South Cumminsville neighborhood.

WIN also sees the importance of helping future generations succeed. S. Annette Muckerheide volunteers with the organization and is responsible for an after-school program for children in the neighborhood. She says that many of her students come from economically challenged environments and are often in and out of the program because of family matters. “My efforts with the children (and sometimes with their parents) are focused on the people I serve – seeing each of them as a special incarnation of God, sometimes hidden in a shell of frustration, pain, exhaustion and hopelessness. So, I try to give them a small place of relief and safety, where they can trust, relax, and learn, where they can at least begin to realize their potential and look forward to a better future for themselves.”

Annette says she has seen the effects of instability. Frequent moving, multiple caregivers due to a parent being in prison or rehab, the lack of sleep, living in overcrowded, noisy environments all result in students inability to concentrate and make it very difficult for them to learn, to gain the skills necessary for living as an adult and as a caring citizen able to care for and nurture and build society.

Through her efforts S. Annette hopes she can help them uncover their full potential. “I have simply grown to love them and want to do anything I can to help them,” she says.

At its core Working In Neighborhoods is committed to creating change and empowering people to speak for themselves and build positive solutions to be that change. Sisters Barbara, Whitney, Brenda and Annette are inspired by the residents they minister with. Their joy comes in walking with and supporting the residents as they grow and create positive outcomes to the neighborhoods around them.

“The people in our communities are examples of resilience, kindness and willingness to share what they have,” said S. Barbara. “My belief is that we are working together to build the kingdom of God together.” 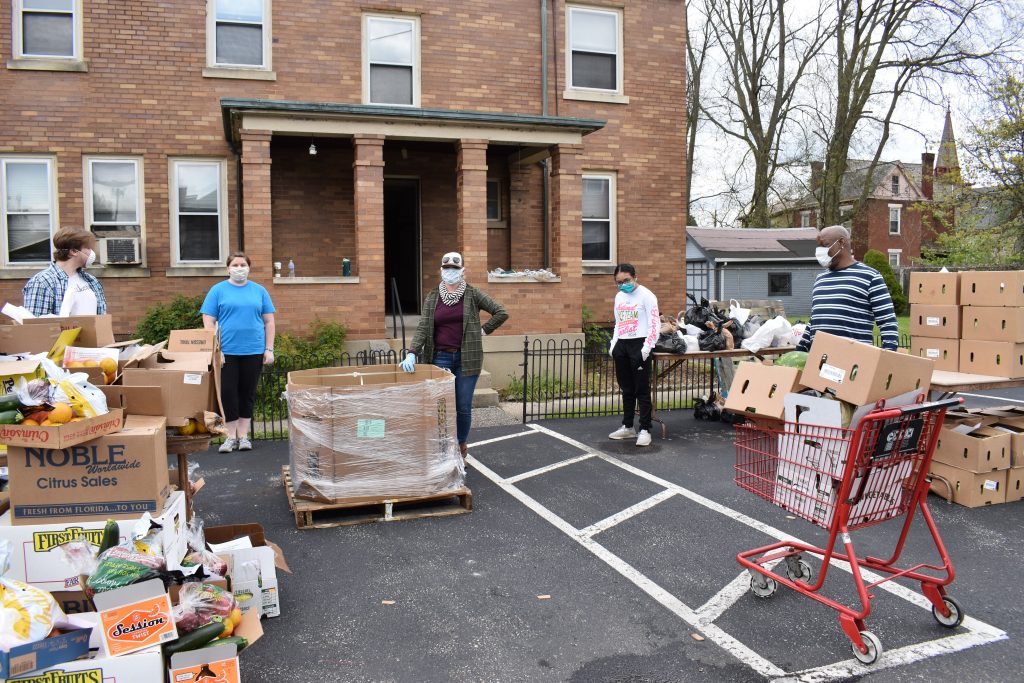 Since the COVID-19 pandemic began, WIN has hosted Produce Pop-Ups twice a month on our campus to distribute free fresh foods and dry goods to local residents in need. Freestore Foodbank delivers the food in bulk, then WIN staff and volunteers assemble variety packages that get handed out via a drive-thru in WIN’s parking lot.