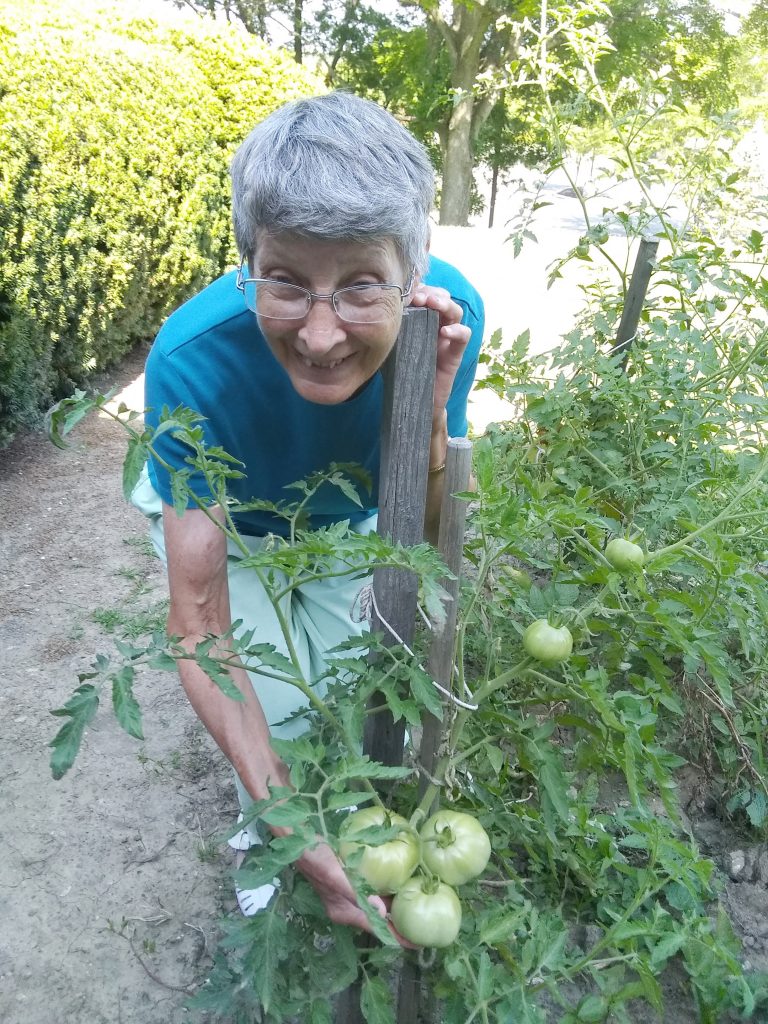 S. Peggy Rein is pleased with the promising flowers and fruit from her garden’s tomato plants.

Peggy Rein learned gardening from her parents and grandparents; they were a family who lived close to the Earth from birth on. At the age of 100, S. Peggy’s dad was still tending his garden plants on a daily basis which gave him energy, happiness and a sense of accomplishment. S. Peggy shares that same spirit from where she gardens at St. Joseph House, an extension of the Sisters of Charity Motherhouse grounds, appreciating the blessings of soil and sun. S. Peggy reflects on her most recent gardening success:

In April I found a package of tomato seeds in the basement. The seeds were in a sealed package, but marked to sell by 2010; what were my chances 10 years later? I was thrilled when a few of them actually sprouted! I started them inside on an east windowsill where they were greeted by the morning sun. Out of the entire package three little plants sprouted through the soil. I talked to them and encouraged them, assuring each one that they were beautiful. Like a mother hen I watched them grow from their threadlike stems into plants that could soon venture outside. After five weeks of nurturing, these tiny plants were strong enough to take their place in our garden plot. They are doing as well as the new plants I bought from the garden store this spring and are producing promising flowers and fruit. I continue to keep a special eye on them; when ready our house hopes to enjoy these homegrown tomatoes in the favored recipes of each cook and maybe even share some with the neighbors. I thank God for the miracle of new life coming from these tiny seeds; they bring me joy in seeing them grow. Do you see why I love to play in the dirt? I can feel the possibilities of each new season in my fingertips.