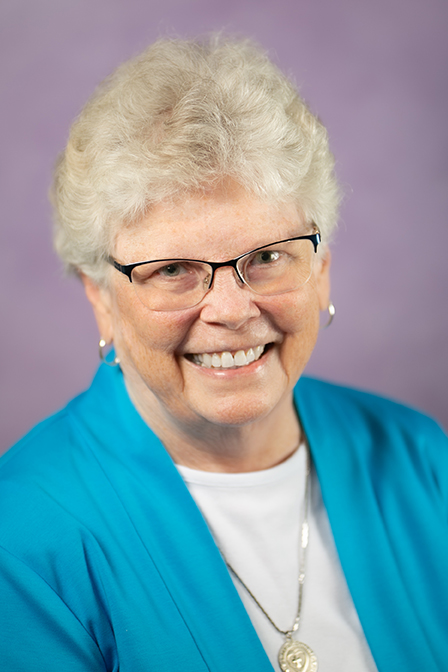 Born in Monroe, Michigan, Sister of Charity of Cincinnati Mary Ellen Murphy (the former Sister Brigid Mary) grew up in Lansing, Michigan, and was taught by Sisters of Charity at St. Mary Cathedral grade and high schools. She found the Sisters who taught her friendly and welcoming and was impressed by their commitment, their availability, their joyful spirit and the wholesome and enjoyable way they related with one another. She loved being around them. By the time graduation came, Sister Mary Ellen knew she wanted to become a teacher and at the same time felt an inner urging to become a Sister as well. She entered the Sisters of Charity of Cincinnati on Sept. 8, 1960, and celebrates 60 years with the Community this fall.

“During these 60 years I have had many amazing opportunities to serve in a variety of ministries,” Sister Mary Ellen said. “Each opportunity has had its own set of challenges and each held unique graces and blessings for me for which I am most grateful.”

Sister holds a bachelor’s degree in elementary education from the College of Mount St. Joseph (Cincinnati). She was first missioned to teach primary and then intermediate grades at St. Louis in Mount Clemens, Michigan. In 1967 Sister became one of two parish religious education coordinators for St. Louis Parish for two years, and then for Sacred Heart Parish in Oscoda, Michigan, from 1969 until 1972.

“In transitioning out of formal teaching after only three years and into religious education I was able to attend the University of Notre Dame [Notre Dame, Ind.] to study for a master’s degree in support of my ministry,” she said. “Beyond that I could never begin to enumerate the workshops, courses and programs I have attended over the years which continually helped prepare and support me for each new step in my life’s journey.”

After six years in pastoral ministry at St. Francis Assisi parish in Centerville, Ohio, Sister Mary Ellen joined four other Sisters of Charity in Malawi, Africa, in 1978. Upon her return, almost four years later, Sister began her ministry as assistant director of the Open Door Ministry in Cincinnati, which seeks “to alleviate some of the immediate suffering of those living in poverty in the local neighborhood.” After two and a half years, she then joined with the Mercy Sisters in the Home Program to assist the low-income elderly living in the same Walnut Hills neighborhood.

Sister was first elected to the leadership position as councilor for the Sisters of Charity in 1987 and served two four-year terms. She then was elected president of the Congregation in 1995, and re-elected for a second four-year term in 1999. During this time she said she experienced one of her most moving moments as a Sister of Charity, “the day we as a Community were gathered at Chapter 2003 and unanimously made the decision to welcome the Vincentian Sisters of Charity as Sisters into the Community … It was a profoundly graced moment – rich in God’s presence and blessing – and one I will never forget,” she said.

Since 2004 Sister Mary Ellen has been engaged in the ministry of spiritual direction and facilitation of individual directed retreats. She now spends much of her time as a spiritual companion and is available for a variety of requests that invariably come her way. When asked what she is up to, her best answer is “the next thing that crosses my path! One never knows what someone may need assistance with.”

In between acts, Sister enjoys painting with watercolor, working puzzles of any sort, walking and spending time outdoors.