As Sisters and employees prepare to move from Seton Hall on the Mount St. Joseph campus, it seems appropriate that we offer the building a special send-off. Over its 93-year history Seton Hall has been ‘home’ to many: Sisters, employees, former Sisters, alums of the College of Mount St. Joseph, retreatants, teachers from the Mount Campus School and Mount St. Joseph guests. As we anticipate the building leaving us early in 2021, we share the following personal memories and experiences from a few of our former members. 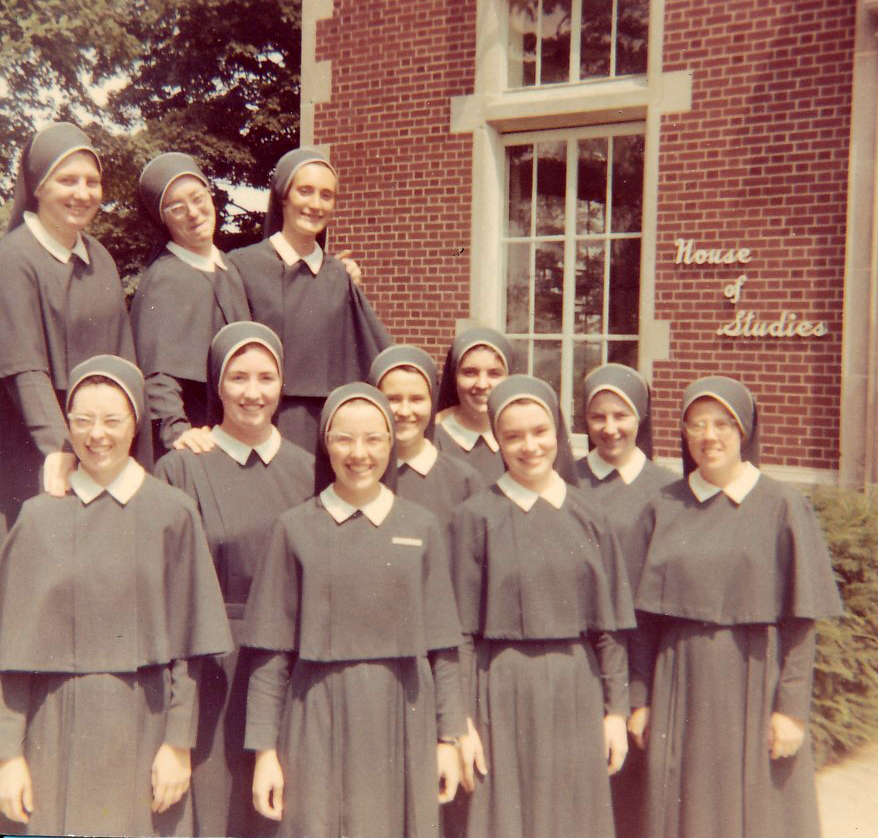 The Band of 1964 stands outside of Seton Hall, also known as the ‘House of Studies.’

For me, moving to Seton Hall represented a huge step forward. We transitioned from sleeping in the sometimes sweltering attic, in curtained cubicles where bats swooped past our heads at night, to having our own rooms. It was so nice to be able to close the door, open the window, and think, pray, and study without distraction. In the first year Novitiate, in addition to spiritual growth, we learned a lot about the hard physical work needed to maintain the whole Motherhouse, but at Seton Hall we got to choose our fields of study, attend college classes, and return home to our close-knit Band of Sisters. S. John Christopher (Elizabeth Cashman) provided the leadership, warmth, personalization, understanding, counseling, and example we needed at a time when we were all growing into the persons we would become. I remember a more relaxed atmosphere, fun parties, singing and celebrating, and lots of laughter. I cherish the conversations we had and the bonds we formed. Seton Hall was a special place. I entered as an insecure, confused 19-year-old and left two years later as a full-time Seton High teacher and a pretty confident adult. Thank you for the memories, Seton Hall. 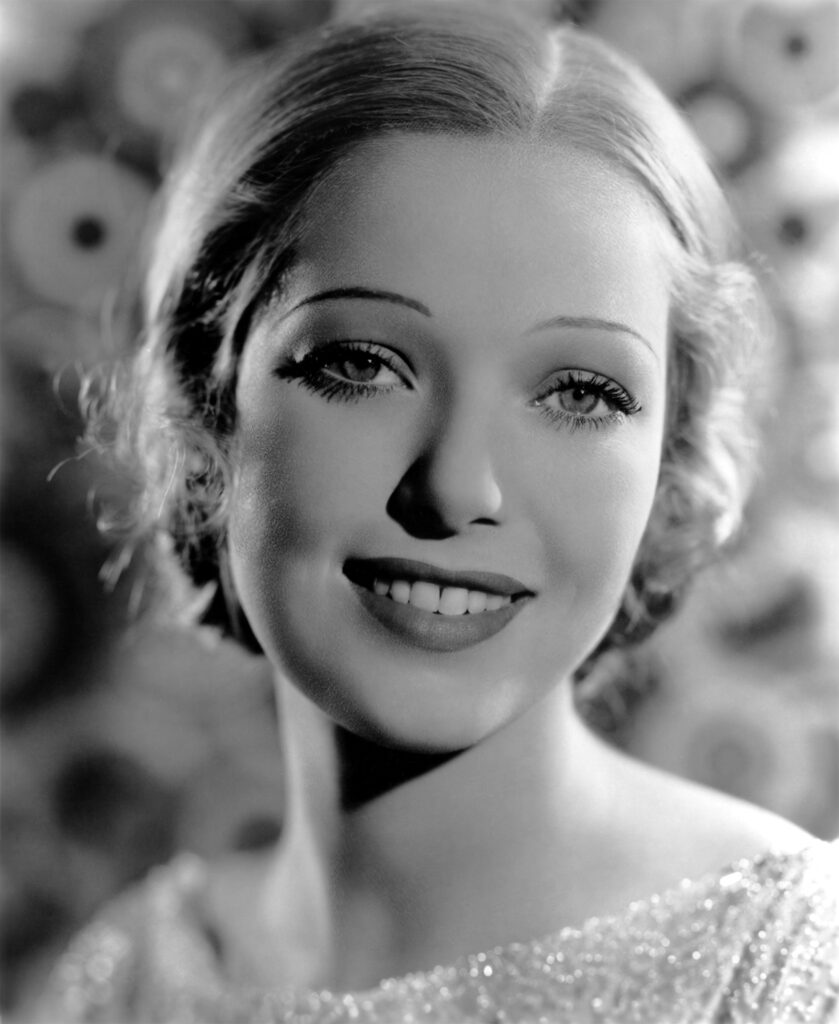 My memories of Seton Hall are somewhat clouded by the years. One memory is the time that Kathy Burns and I were standing in front of Seton Hall and a black sedan pulled up and stopped next to us. The passenger window went down, and a hand extended to greet us. Turns out the hand belonged to the beautiful and famous Loretta Young! She called us “the light of the world.” Kathy might dispute what she actually called us, but that’s my recollection. I remember that we rushed back inside to share our experience with S. John Christopher (Elizabeth Cashman). I think that Loretta also made her way around back where she greeted some of our Sisters playing softball. It was so long ago, but I have such fond memories of you all. We shared many adventures! 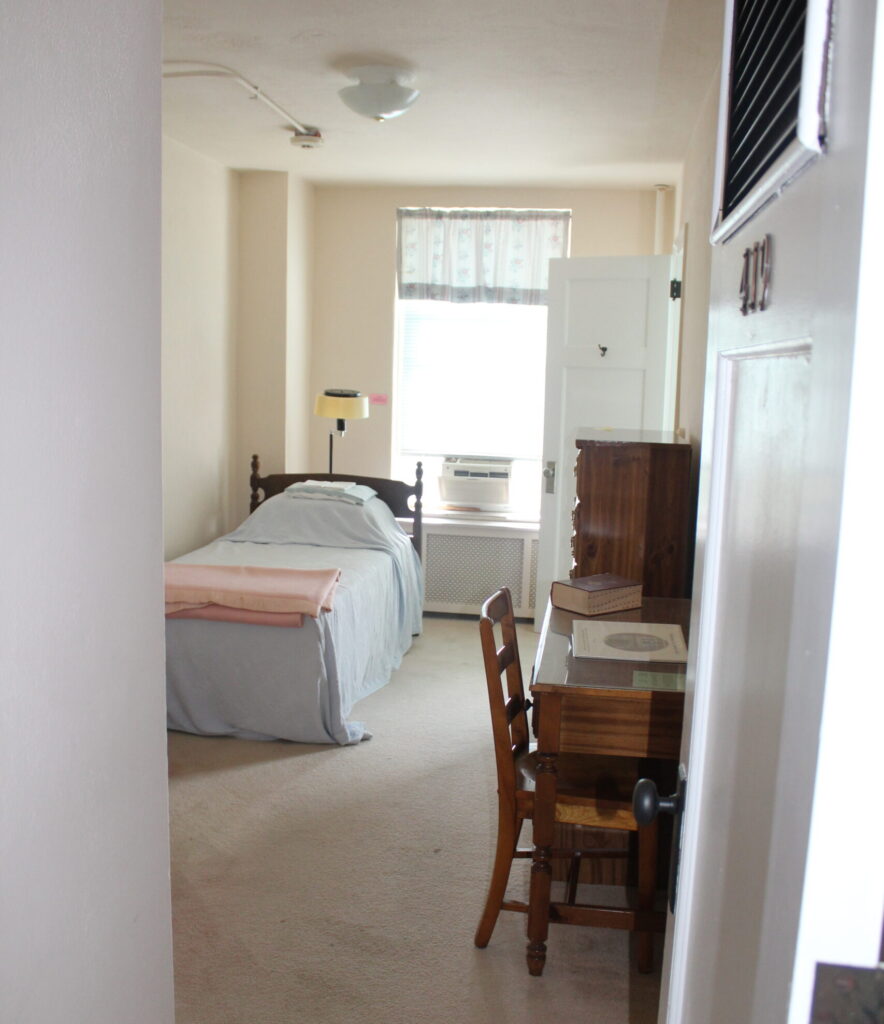 An individual room located on the fourth floor of Seton Hall where many Sisters and former members lived during their formation years.

We were living in Seton Hall, each of us having our own individual rooms. One particular day, while walking down the hallway, Marilyn stuck her head out of her room and asked if I could help her. I said ‘yes.’ Knowing Marilyn that could mean a wide variety of things. As I stepped into her room she handed me a dust mop. “Can you help me catch a field mouse?” I agreed and at the same moment the mouse darted into her closet. I quickly jumped on a chair! It was at that moment that I realized I had an intense fear of rodents, even though it seemed to be a cute little guy. Marilyn slowly emptied her closet, so she wouldn’t scare the small mouse. The mouse ran out of the closet along the wall board and I hit it with the dust mop; at the same time Marilyn was saying, ‘Be gentle because they don’t have bones.’ That was the day I learned mice don’t have bones and that I have strong arms. Marilyn took it hard and said I could go; she controlled her sadness as she cleaned up the remains. That was the last time Marilyn sought my help; I continue to be afraid of rodents. You gave us life lessons, Seton Hall. Thank you.