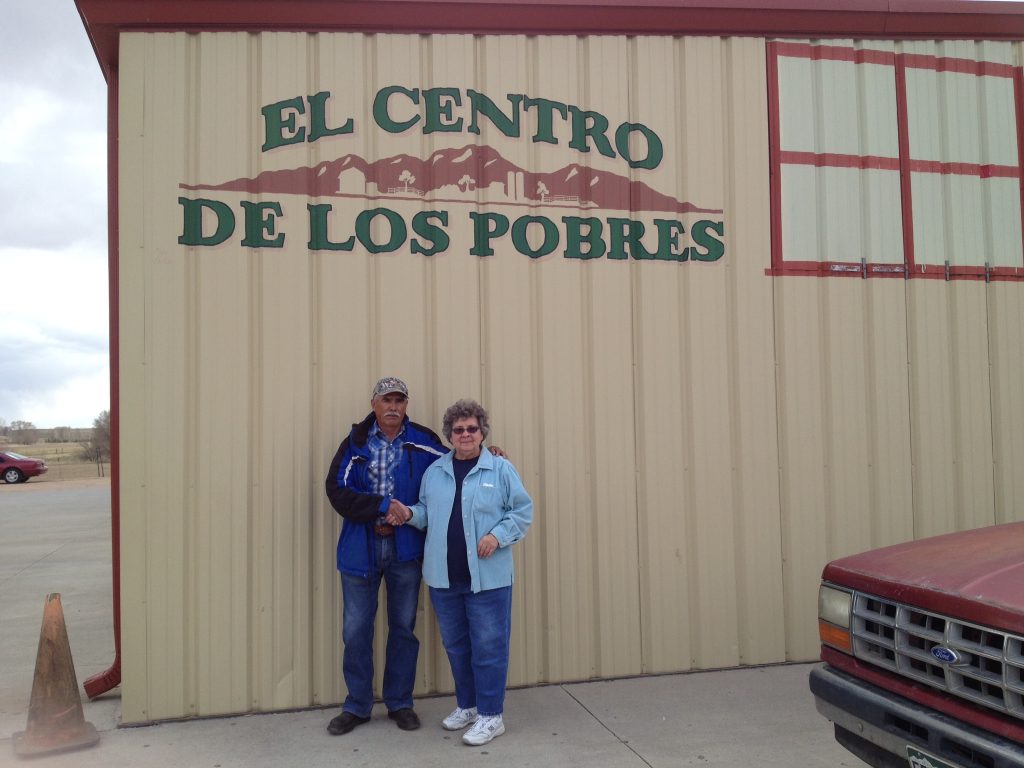 “This is NOT a happy place!” These are S. Nancy Crafton’s own words, spoken to S. Jean Miller for a 2014 Intercom article about her ministry at Los Pobres, a center for the immigrant farm worker population in Avondale, Colorado. It is now the year 2020 and this is a story that has gotten worse! Yet the goodness and hope of this story is, as always, found in our Charity Charism: “As pilgrims we pray for the wisdom to know the needs of our sisters and brothers and we dare to risk a caring response.”

Nancy and a legion of 40 volunteers are imbued with this charism. It is total love that fuels the center’s ministry; a ministry that has only suggested operating hours. For in truth, the problems of a displaced people know no time of day or situation too great to bring to Los Pobres. The center provides migrants with food, clothing, medical care, bill assistance, and even a place to lay their heads when there is nowhere else to go.

Dedicated donors help support the center, which opened in 2000. At that time Los Pobres was about 5,000 families, 200 visiting each week. Many factors have caused the numbers to decrease, but not the seriousness of the problems! Here are some of the changes S. Nancy has witnessed in the last 20 years:

A mother and her two children at Los Pobres Center.

Misdemeanors became felonies. Driver’s licenses from their native countries were confiscated and destroyed, leaving them with no official ID. If a worker was stopped for any reason without a license they were incarcerated and deported. This resulted in the ceasing of the migrant farm worker traveling across the United States to follow the crops. They had to ‘hunker’ and settle out in the five counties in and around Avondale. S. Nancy said they see about 1,000 families with 600-1,000 children. Many of these children are from mixed documented parents with Mexican and American children all desperately trying to find a way to have a status change for immigration.

In 2012, President Obama instituted by executive order DACA (Deferred Action for Childhood Arrivals). Thousands of children, young adults and high school students were able to legally drive, work and go to college. DACA papers at that time cost $495 to process and obtain. In 2016, immediately after the inauguration of the new president, the DACA program was ended. Thousands of dollars in legal fees are incurred to help secure the retention of the detainees within our country. The fee for a renewal document, alone, was raised to $895 if it remains solvent. The temporary reprieve that the Supreme Court gave us this June may be just that, temporary. The president has already filed papers to stop it once again.

You may remember a great deal of confused misinformation surrounding the caravans coming toward the U.S. in droves from as far way as South America. The Department of Homeland Security began discouraging refugee applications by closing entryways at the border. Authorities went so far as to automatically charge all these adults crossing the border as felons! As a result, the adults were incarcerated and because children could not be put into these prison settings, they were separated into holding cells, amounting to little more than cages.

Nancy picks up the most recent thread of the story. “Now we have the pandemic virus COVID-19 upon us. The closure of the U.S. with the advice of the CDC has impacted every human being on Earth. However, the greatest impact is within that segment of society on the lowest rung: those menial labor, agriculture and low-income jobs without benefits. The government financial aid excludes the immigrants who with their ITINs** pay over $7 billion in Social Security yearly. None of them qualify for assistance. Also, families with one undocumented parent do not qualify for assistance. They already are not allowed to have health insurance due to a lack of Social Security Numbers. Life is one of survival.

“One of Los Pobres’ American-born caregivers was denied government help because her husband is undocumented. They have three American-born children. He pays his taxes with an ITIN number. She pays with her Social Security Number. Any family member that has an ITIN number totally denies any other family member access to the stimulus package even though that member has a Social Security Number. Without her foreign-born husband, the wife would have been eligible for a stimulus check of $2,700!”

Hardships arise on a daily basis. S. Nancy, as a trained nurse, shares some of her most poignant stories about the health care road blocks that the immigrant encounters. 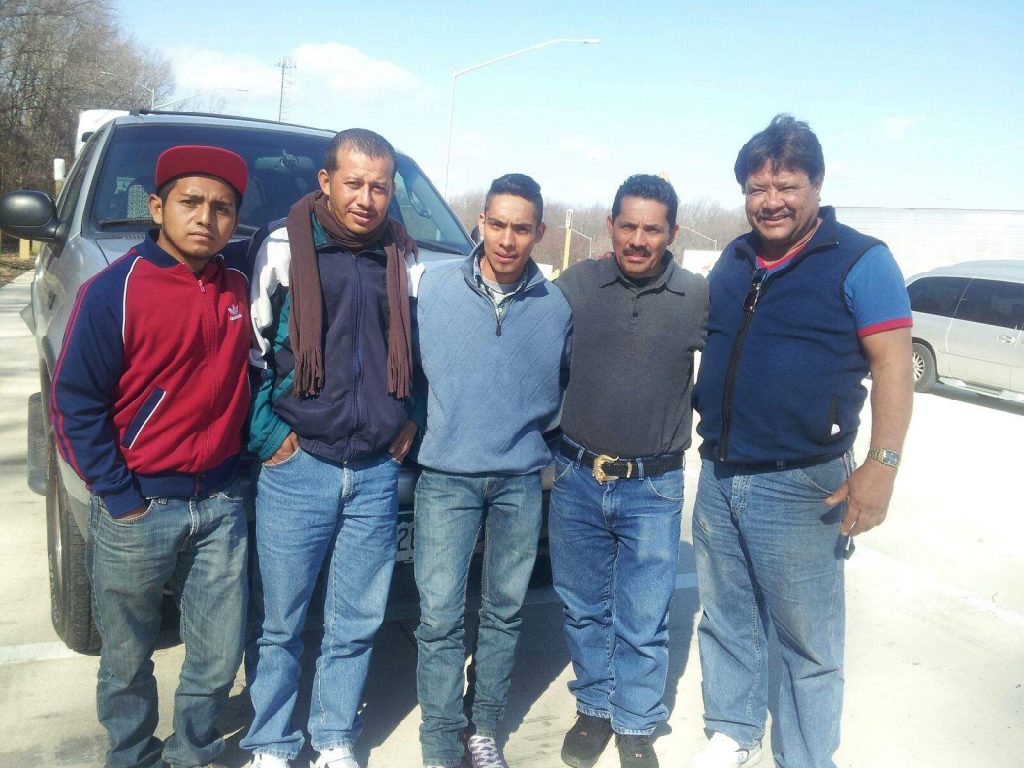 One cold Tuesday morning I arrived at our closed center to find three young men patiently waiting for help in our parking lot. They had driven 36 hours with an injured friend. They had slept all night in the car not knowing whether or not someone would come to find them.

The three of them were working as a roofing crew when Jorge fell off the roof injuring his back. His friends drove him to the nearest hospital where he was turned away due to his lack of insurance and documentation. After making a few frantic calls to friends in other states, they started out for Colorado. The trip was painful and difficult; they had gas money but no food or water. Jorge was in terrible pain. I found him lying in the backseat of the small compact car, his legs drawn up in a fetal position. He told me his back hurt so badly and his legs were cramping but he could feel them and move his toes. I put a call into an orthopedic surgeon who has helped us more times than I can count. He sent them right into the Emergency Room at St. Mary-Corwin Hospital where the surgeon met them.

Jorge was taken to surgery after MRIs and spine films showed a badly fractured lumbar spine. He underwent an ‘instrumented fusion’ and was hospitalized for five days. After a brief recovery, Jorge returned to roofing as is often the case with our clients who feel desperate to send money to their families.

Margarita was having severe abdominal pain, distention and the inability to sit comfortably due to pain. Her clinic doctor identified a large tumor the size of a football.

No one locally wanted to operate. We were called by the clinic and asked to help secure care for her. It was suggested that we take her to Denver, Colorado where they ‘were supposed to help with the uninsured clients.’ The problem wasn’t just the uninsured, but also the undocumented. We felt that we had only one recourse of action!

First, we drove to Denver Health. Because she was undocumented and didn’t live in Denver we were rejected. Anticipating that this would follow us wherever we went, we called a few friends and secured an address in Denver we could use if the same issue arose. We determined not to answer any documentation questions.

Then with more determination we went to the University of Colorado Hospital. By then Margarita was in so much pain we put her in a wheelchair and went straight to the Emergency Room. We were met in the parking lot by a wonderful young orderly who wheeled her into the hospital.

Eight hours later, after several different services, evaluations and tests, she was assigned to OB/GYN. The young residents were gentle and kind. They informed us that Margarita had a very large tumor and needed surgery. The sooner the better. Could we take her home and bring her back in the morning or surgery? When we hesitated, they quietly asked, “Is she documented?” When we answered in the negative, they understood that the hospital would not let her be admitted if we had to come back in the morning and go through the Admissions Office.

Thankfully she was admitted to the hospital at once and prepped for surgery. She was terrified to be left in the hospital alone as we needed to return to Pueblo for work. The residents assured her that she would be fine and that there were Spanish-speaking workers who would help her.

We left at 11 p.m. during a horrendous blizzard and prayed all the way home! Surgery went very well. We arranged for Margarita to stay in Denver with friends of ours until she was cleared to come home. She returned to work within 12 days so she could continue earning her meager salary to send home to her parents.

Federico fainted while working in the fields of a small rural community one hour from Avondale, Colorado. Fellow workers took him to the Emergency Room of the local hospital where he was evaluated, treated and discharged. Not knowing what to do with him, the hospital social worker dispatched him via courier to Avondale around 6 p.m. I found him the next morning sitting on a log shivering in the early morning sun. The temperature was about 40 degrees.

Federico was dressed only in trousers and a hospital gown. Pinned to his gown was a note that read, “Take to Sister Nancy in Avondale. She’ll know what to do with him.” He had spent the entire night cold, hungry and sick on the concrete floor in a shed. I opened the center and took him into our clinic. His temperature was 103 degrees! After making a call to one of the resident supervisors, I started him on antibiotics.

We kept him in the clinic for several days where he slept on our exam table. He had no home to return to having lived from shed to shed working from field to field hitching rides with other farm workers. He was 70 years old and still eeking out an existence in our Colorado fields. Later that October, we helped send him home to his daughters. He knew after this experience that his time in the fields was over and Mexico was calling.

Nancy cares for each client as a loved and valued member of God’s creation, buoyed by her Charity Charism. She never loses love or hope for those she serves.

Editor’s note: An ITIN is an Individual Taxpayer Identification Number which is a tax processing number issued by the IRS. The IRS issues ITINs to help individuals comply with the U.S. tax laws for those not eligible for Social Security.