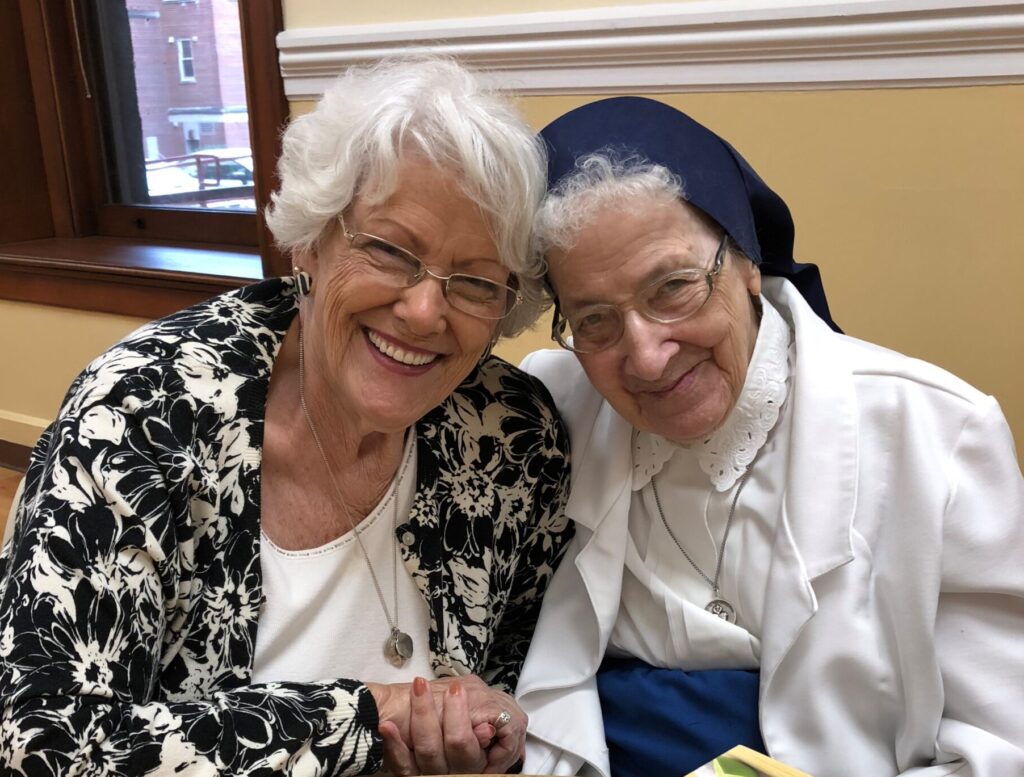 A volunteer at the Society of St. Vincent de Paul Food Pantry and Thrift Store in Spring Hill, Florida, Associate Peggy Brockman (left) says she was inspired by S. Mary Loyola Mathia’s service to others.

After making her commitment as an Associate in Mission in 2011, Florida Associate Peggy Brockman says she wanted to emulate Sister of Charity of Cincinnati Mary Loyola Mathia’s service to others and live the charism of Saint Elizabeth Seton. Peggy’s devotion and years of volunteerism at the Society of St. Vincent de Paul Food Pantry and Thrift Store in Spring Hill, Florida, are a strong indication she has taken her commitment to heart.

Eight years ago, a friend invited Peggy to accompany her to the St. Vincent de Paul Store and pantry (Hernando/Citrus District Council) in Springhill. She was so taken by the friendly and dedicated volunteers who were serving the people there that she signed up instantly.

“I was put to work on the phone. Initially I worked in sorting clothing and pricing, then bagged food in the pantry, and for a few years now, I have been a cashier,” she says. “Cashiering has been a real eye-opening position. I get to meet and greet many people. I have seen homeless mothers with small children who would ask me for blankets, clothing and food for their children.

“Homelessness is a challenging situation for so many,” she continued. “This was an interesting story a volunteer told me: A gentleman saw a homeless man and tried to take him to a shelter and find a place of employment for him. The homeless man said, ‘Thanks but no thanks.’ He told the volunteer that he was content with his homelessness and did not want any home responsibilities or a taxing job. The man also stated many of his homeless friends felt the same. I was reading one of St. Elizabeth Seton writings and thought of this event: ‘Two great objects require all our attention in this world – the glory of God and the salvation of our souls. To these two ends all our views and plans and actions should tend – there are no actions so small which may not be made great and precious before God by an upright and pure intention.”

Service has always had a piece of Peggy’s heart. The mother of two and cosmetologist has been involved in church activities for as long as she can remember. A Eucharistic minister, Sacristan, and minister to the homebound and in hospitals and nursing homes, Peggy said she was blessed to be chosen as one of her parish’s (St. Francis Xavier Cabrini) first women altar servers.

It was while she was serving at St. Francis Cabrini that she first met S. Mary Loyola Mathia, who at the time was actively ministering at the parish as director of RCIA and annulments. S. Loyola introduced Peggy to the SC Associate program, and in 2011, she made her commitment to the Community. Since, she has become the group leader for 15 Associate members. “I am so proud to say I am also mentoring eight new candidates and hoping to have them ready for commitment in January 2021. During this pandemic we are studying through text messaging, various books, tapes and computer information. I have been a member of the Associate Advisory Board for several years, and I enjoy the meetings and visiting with the Sisters at the Motherhouse.”

Peggy has also recruited some of her friends as well as fellow Associate Genny Sample to volunteer at SVDP. “They have the heart of giving and sharing to others and that is the requisite necessary to serve all people in need,” she said.

Homelessness is a global issue, affecting people of all ages from all walks of life. And while the solution and its end seems to be years away, Peggy says, “Our love, prayers and compassion is the only way we can continue to help those who cannot help themselves.”