This week we offer memories from current members as they share experiences of humor, illness and celebration, all within the walls of Seton Hall. New memories will continue to be shared until the building comes down in early 2021. 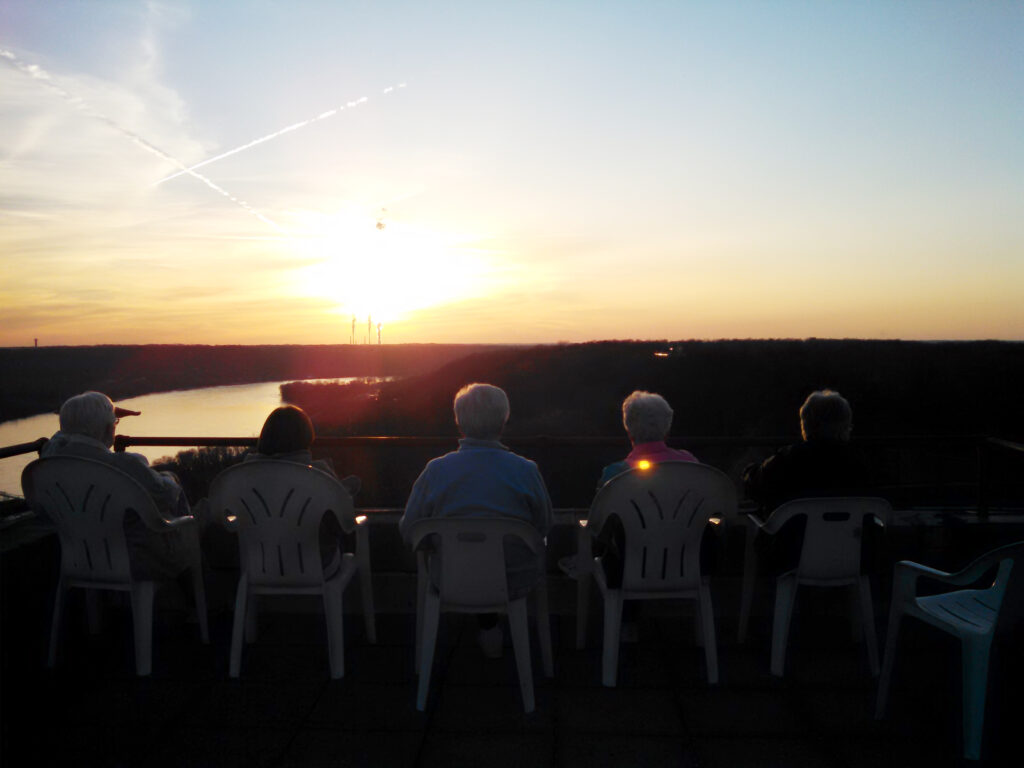 Many Sisters of Charity and guests have enjoyed the mornings and evenings on the roof of Seton Hall.

As a retreat participant in 1972, and again as a ‘temporary resident’ in 1974, S. Donna Steffen recalls living in Seton Hall and taking advantage of its unique offerings:

“In the summer of 1972 I made my first directed retreat at the Motherhouse, given by a Jesuit. I stayed at Seton Hall. Most mornings and evenings I prayed on the building’s roof, with a sunrise or sunset, and overlooking the contour of the Ohio River. What a great place for prayer!

“In the summer of 1974, Sisters Marcel DeJonckheere, Paula Mary Russell, Jackene Hartford (now Laverty) and I were living together at Stan Thom’s House, the first house on the southside of Delhi past Neeb. Stan, a French professor at the Mount, had been spending some time ministering with S. Ruth Jonas in Africa. He was returning and we were moving to “Forbus House,” down the hill from Seton High School. However, he was coming home a bit early, and we were not able to get into our “new” dwelling, so for one month, we lived for four weeks in Seton Hall during the summer. It was interesting being a small community, coming and going from Seton. The swimming pool kept calling to us. One beautiful evening we thought it would be wonderful to swim under the stars. The old fence had the wooden beams parallel to the ground. We knew where there was a loose one at the bottom, near the bathhouse. We crawled under, and had a wonderful time in the pool! We tried to be quiet, since we knew that voices carried. However, in what seemed like a short time, the night guard unlocked the door to the pool, shined his flashlight on us, and asked what we were doing there. We tried to explain … as we headed back to Seton dripping wet!” 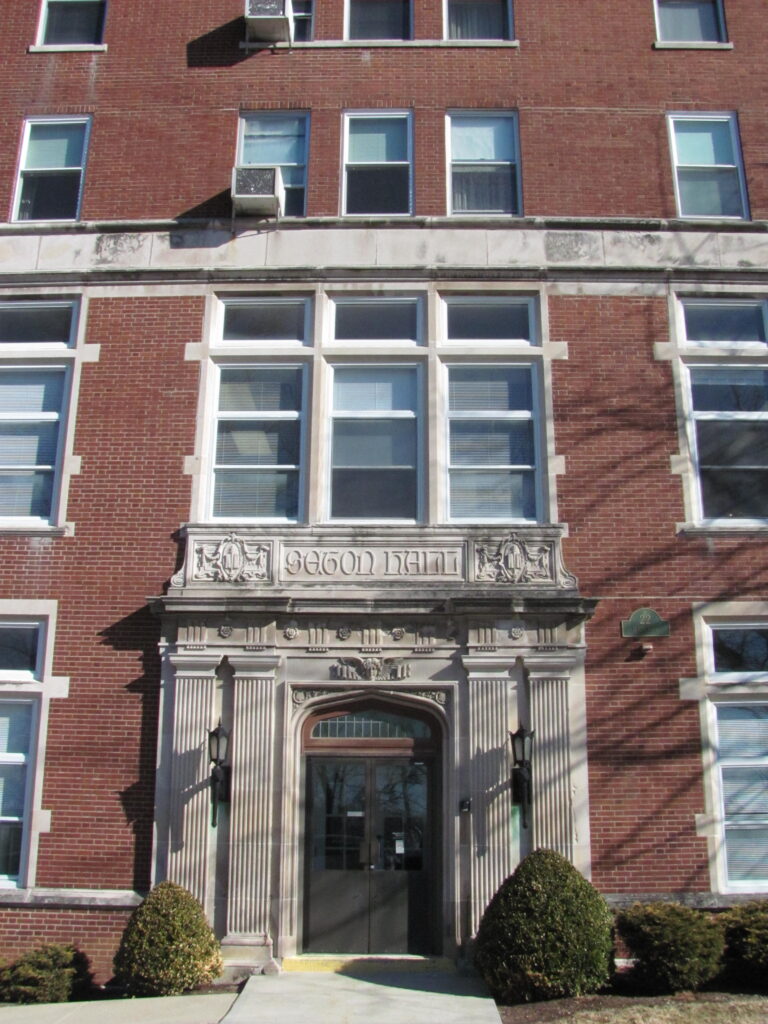 The halls of Seton Hall were turned upside down in 1967 when a mysterious illness affected some of the young members living there and caused many to be quarantined and moved to another part of the Motherhouse.

Sisters Delia Sizler and Pam Jones came to the Sisters of Charity in the fall of 1965. While living in the formation areas of Seton Hall in 1967, an unknown illness affected some of the young members. It remained a frightening memory for those who lived through it.

The year was 1967, the year of the mysterious illness that swept the ‘young Sisters’ (postulants too) off their feet. Sisters Dee and Pam were second year novices. It all happened suddenly to many living in Seton Hall. Symptoms were high fevers, weakness, fainting and diarrhea. Several of those affected required hospitalization. Initially it was feared to be spinal meningitis, so great measures were taken to isolate the sick. Fear ran through the Motherhouse. S. Pam Jones had just come home from class and was met by Fran Isaac feeling very weak, needing assistance in getting to bed. Jackie Hartford couldn’t talk, experienced extreme weakness and eventually was hospitalized and placed in an ice bath. S. Pam felt like Florence Nightingale as doctors and nurses started showing up and then the ambulances. Her nursing career sprouted from this experience! The door frames of bedrooms of those who were sick were marked with red tags meaning absolutely no entry. Seton Hall was quarantined and the sick moved to an isolated area in Marian Hall. Food histories were taken of all the young Sisters and each one, not experiencing symptoms, was asked to call their parents from a phone located in the basement of Seton Hall. S. Dee caught ‘it’ having had late supper in the formation dining room following a family visit. She had juice from the juice dispenser in the dining room that proved to be the culprit. The dispenser had been repaired by someone who carried the Shigella bacteria and transmitted the bacteria to the spout of the dispenser. Long story short, after a lengthy quarantine and recovery of those taken ill they returned to their Seton Hall rooms which had been fumigated along with all their belongings. It proved to be a happy ending to a grueling and frightening experience. It is believed that there has never been or never were before this incident any red tagged rooms, not even in the current pandemic.

One of S. Patmarie Bernard’s treasured memories of Seton Hall involves hosting five of her friends from Santa Fe, New Mexico, for her 50th jubilee celebration in 2008. S. Patmarie says the following pictures convey the joy and memories she shares with the building. 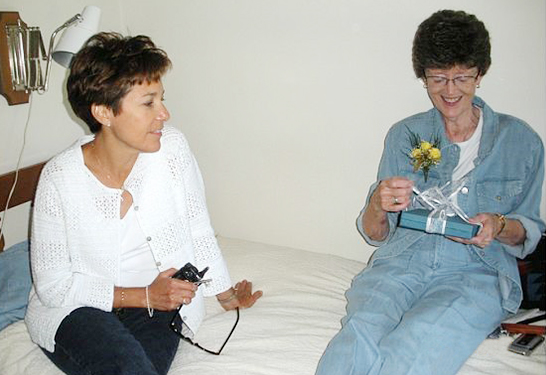 S. Patmarie Bernard opens a Jubilee gift from her visiting guests. The group from New Mexico stayed at Seton Hall and enjoyed the hospitality offered. 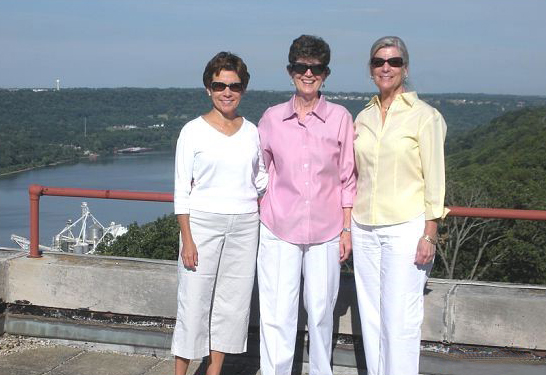 S. Patmarie Bernard (center) and her guests enjoying the view of the Ohio River from the Seton Hall rooftop. 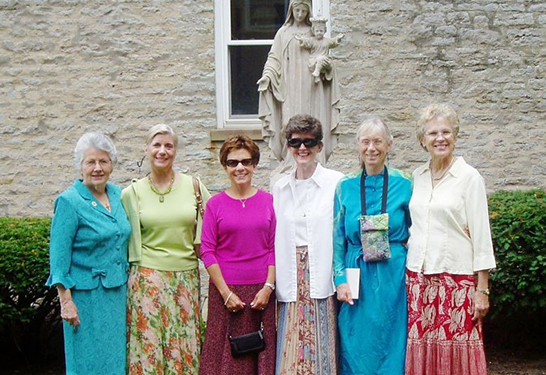 A group picture of S. Patmarie Bernard (third from right) with her New Mexico friends in the courtyard between the Motherhouse and Seton Hall’s back entrance.