The College of Mount St. Joseph became a reality the very year women received the right to vote, opening its doors in September 1920. The work of excavation for Seton Hall, the college’s planned new home, began in March 1926, with one restriction: “Don’t touch a tree!” The first class that convened in Seton Hall was in journalism in March 1927; and that summer, retreats and summer classes were offered there. The first students living and learning in Seton Hall moved in September 1927 with the first two floors devoted to offices, labs, a library and classrooms and the upper floors serving as a residence hall for 140 students. There was a parlor on the first and fifth floors as well as a small chapel on the fifth floor. It was here that the memories for the ‘Mount St. Jo’ girls began! Alumnae memories are offered in the paragraphs below.

“I graduated in 1961. The new Mount was being built so we heard lots about it. My little sister went to that Mount and my mom – Helen Devine – graduated in 1932. She thought it would be cool if I had her old dorm room. Not sure I did; I was on the fifth floor. I remember that we had lights out at an early hour. Sisters had the unhappy task of patrolling the halls. … I loved my teachers and friends and have many good memories. RIP Seton Hall.” 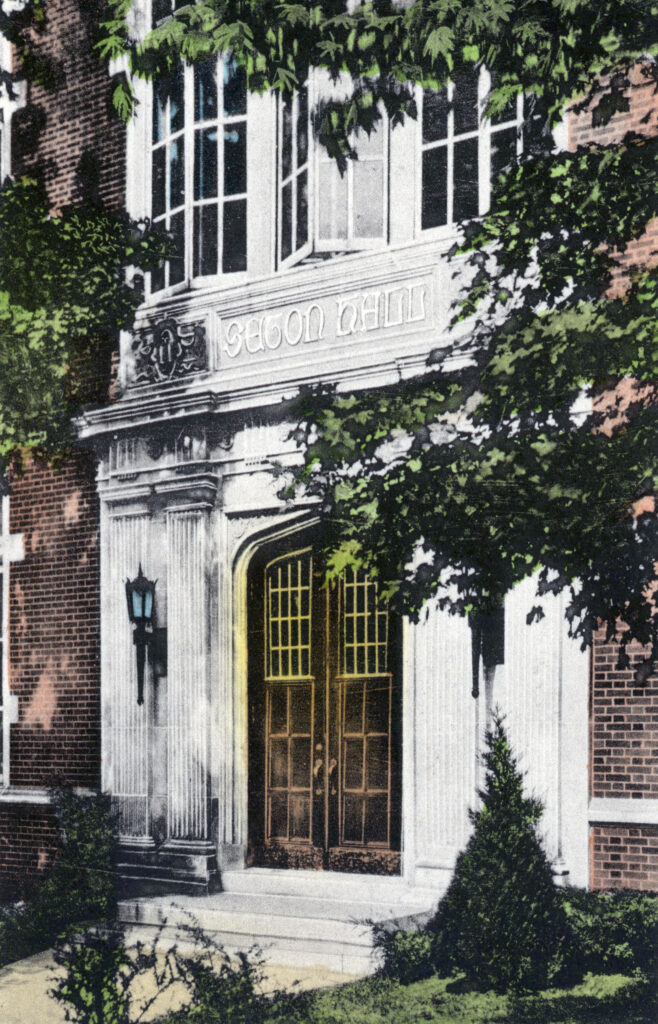 “I lived in Seton for three years and have so many happy memories of the days and nights there.  It was a real move up from my freshman year in Marian! I am still in contact with roommates and friends from the Mount. I have encouraged my family alum to check out the place where mom/grandma went to school.”

“The Sun Room on the second floor of Seton was the waiting area for gentlemen callers during the late 1950s and I imagine other years as well. I lived in Seton for three of four years overlooking the courtyard. I can’t believe the terrazzo floors will be a thing of the past. The building was always so beautiful in my eyes, an architecturally pleasant structure and the center of four years of memories.

“When dates would arrive, they checked in at the front office and were then escorted upstairs by the steps near the entrance. Their date would be notified and then proceed to the meeting place. In 1953 or 1954 I had a blind date arranged by a fellow Mountie, Pat Mulloy (married name). His name was Donald Appelmann. We went together a couple of years and then went our separate ways. Over a year ago he contacted me again and we started corresponding. To make a long story short, we were recently married in Nebraska on Oct. 2, 2020. We both continue to correspond with Pat (her husband, Ed, is now deceased). Don and Ed were high school friends.

“I had Home Economics classes in Seton along with chemistry and a few philosophy classes and will never forget the elevator. We could only ride ‘up’ and always had to walk ‘down.’ There are a lot of steps from the fifth floor to the first!” 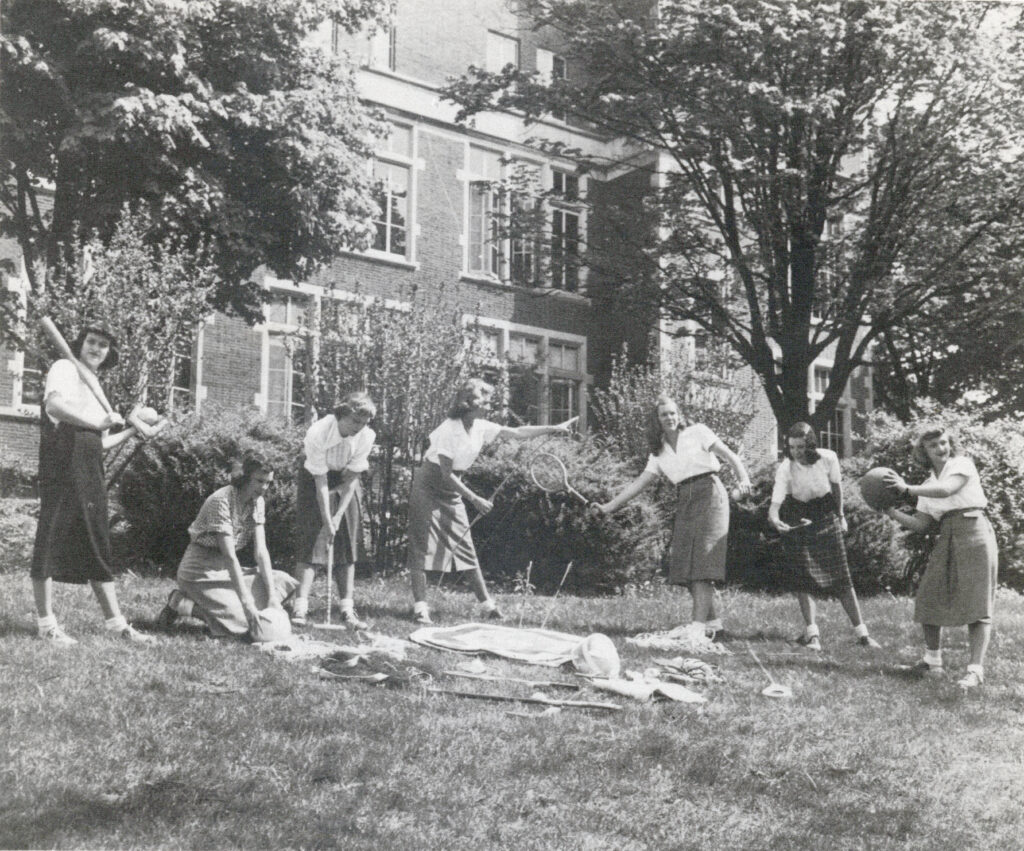 “I remember, like yesterday, my trip down the beautiful tree-lined avenue to Seton Hall. The impressive stone exterior stood out from the other buildings. S. Xavier Marie Garrett, dean of women, met us along with S. Maria Corona Molloy, president (a very intimidating presence), and S. Reginald Sullivan, the bursar, signed us in, gave us our room assignments and class schedules!

“I knew my journey to a different life had begun! It was exciting to meet roommates and classmates, explore the campus, and discover the ‘perg’ overlooking the Ohio River. This was a popular spot during all kinds of weather. And who can forget the view from the roof? I remember there was one phone on each floor for the residents. Lines were long, especially for those waiting for a date to call in! Whenever the phone rang, heads would pop out of every room.

“In the basement of Seton Hall there was a large room called the ‘Soc’ where students could choose to go after study hour. There was a small candy shop in the basement which was open during the social hour. It too was a busy place. The ‘Soc’ was also the location where dances were held on Sunday evenings. Xavier University students were bussed out to the Mount. Although there were many awkward moments, I remember some students met their future husbands there! We had many days of classes and activities, some afternoons walking to UDF, interspersed with making lifelong friends. I still keep in touch with some of my ‘Mountee’ friends. It has been 61 years! I treasure my phone calls, Christmas cards, occasional notes and my memories which began that September day in 1955.” 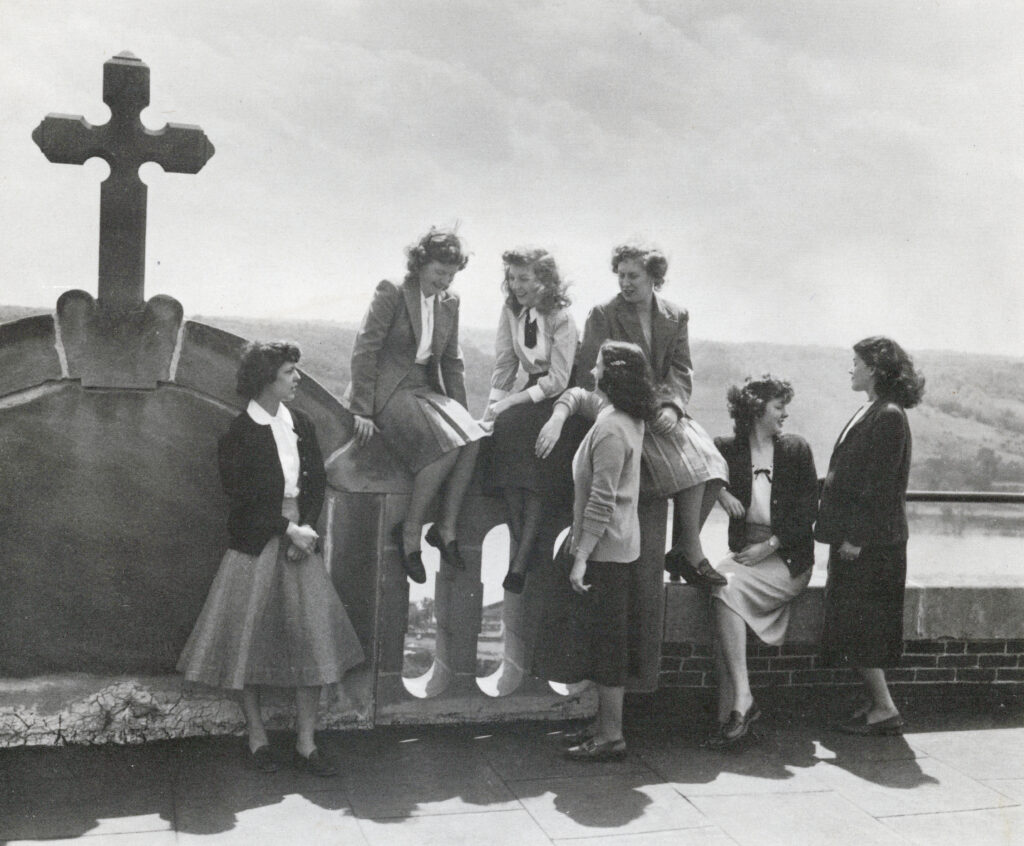