Changing Lives One Donation at a Time 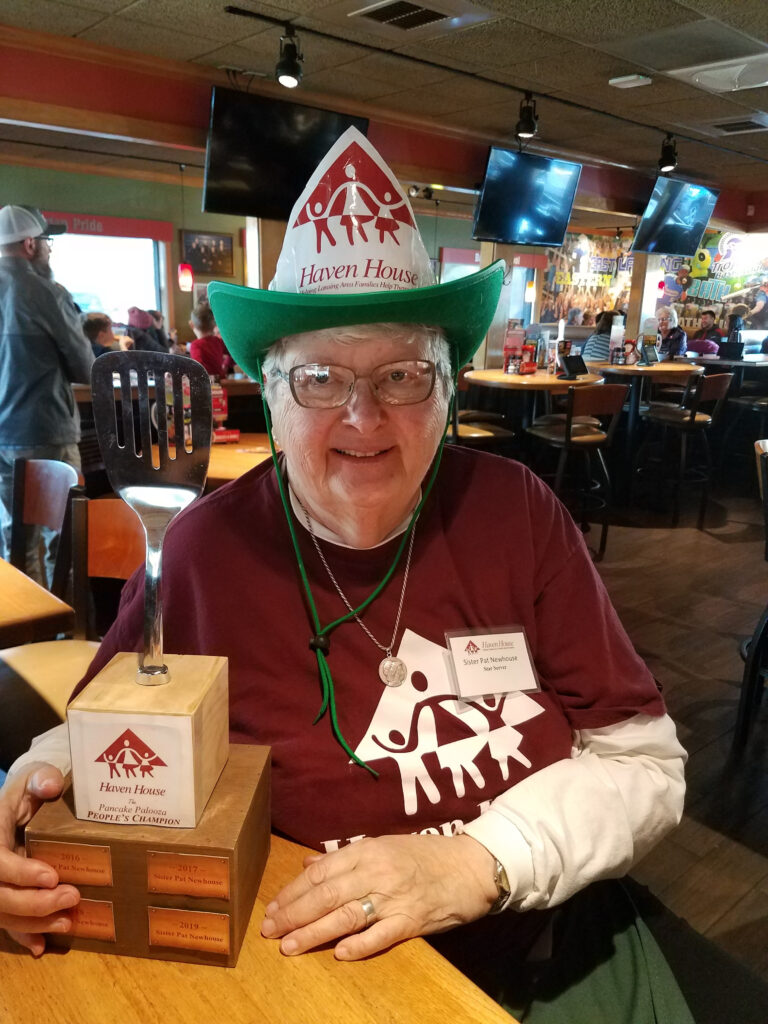 Committed to the work of Haven House in Lansing, Michigan, S. Pat Newhouse was a star server at the organization’s Pancake Palooza in February where she was named the People’s Choice Award Winner for reaching the most supporters.

On a street in East Lansing there’s a home that’s known to all.
Its specialty is helping families who’ve lost their home.
Haven House is always ready to get them on their feet,
To start their lives all over and help them with their needs.
Volunteers are always ready to help them when they can.
So give, give, all you’ve got and we’ll do it all over again.

It started out as a simple gesture – selling cookbooks to help a local organization raise funds for its homeless families. But it wasn’t long before S. Pat Newhouse’s involvement and love for Haven House – an organization providing emergency housing and support services for one-parent and two-parent families with children – grew infinitely.

Invited to participate, as a celebrity, in Haven House’s second annual pancake breakfast fundraiser, Pancake Palooza, S. Pat left that day only to meet a mom, her small child and her six-day-old baby. “That really touched my heart and spurred my efforts to try to do my best to help homeless families,” she said.

A Sister of Charity for the past 62 years, S. Pat has devoted her life to teaching and pastoral care but in her spare time she has enjoyed volunteering to help those in need. “I think I got my inspiration to help others during my years in grade and high school, when we raised money for missionaries in foreign lands by selling magazines, candy bars and making goodies for bake sales,” she recalled.

Her recent efforts have most certainly been beneficial to the mission of Haven House. The organization depends upon the support of the community to help end homelessness in the Lansing, Michigan, area. Using her natural friendly disposition, S. Pat has been able to raise approximately $30,000 over the last eight years for the organization. Just as important is the awareness she has brought to the issue of homelessness as well as the organization through her fundraising efforts.

“I don’t think people are aware,” S. Pat said. “You don’t see families on the street; they might be living with another family member. It’s a strain on the family they are staying with but they have no place to go. While families are at Haven House, children are in school, parents are looking for a job and eventually working to find an affordable place to live.”

The shelter uses its funds to help families who are homeless prepare for permanent housing by developing and promoting self-sufficiency, stability, and financial responsibility. In addition to housing, residents receive meals, crisis counseling, assistance with goal setting and referrals to other agencies as needed.

While her efforts are mostly concentrated on fundraising, S. Pat does have opportunities to meet some of the families staying at the home. She is known to dress up as the Cat in the Hat every now and again and recalls a grandfather of three who came to the home last year. “If he had gone to a different shelter, they would have only taken him and put the kids in foster care. Haven House took them all in and they were able to stay together as a family. The grandfather had lost his job, and with the help of Haven House was able to find another and eventually housing. They then followed him for a year – helping him to plan his finances and get him back on his feet. They do great work!”

Again this year S. Pat was a star server at the Haven House Pancake Palooza in February. Joining others in doing “whatever it takes” to raise the most funds to help homeless families, S. Pat earned almost $5,300 for the organization and was named the People’s Choice Award Winner for reaching the most supporters. The honor affirms her ability to connect with others and her determination to helping the families of Haven House.

What started as another fundraising challenge for S. Pat Newhouse quickly became so much more. The mission of Haven House touched her own heart and now many families in need are benefitting from her kindness and outreach.

Editor’s Note: Lyrics to the Haven House fight song by S. Pat Newhouse, sung to the tune of the Michigan State fight song.