Pat Malarkey entered the Sisters of Charity in the fall of 1964. She and her Band were some of the first in formation to live and explore the Seton Hall haunts and fun spaces. They remained living there an extra year to complete their degrees at the new Mount campus across Delhi Road before being missioned. S. Pat Newhouse often volunteered on the Motherhouse campus in the summers when taking a break from teaching as did S. Victoria Marie Forde. Seton Hall offered ‘a change of pace’ for each of them. Their memories are below: 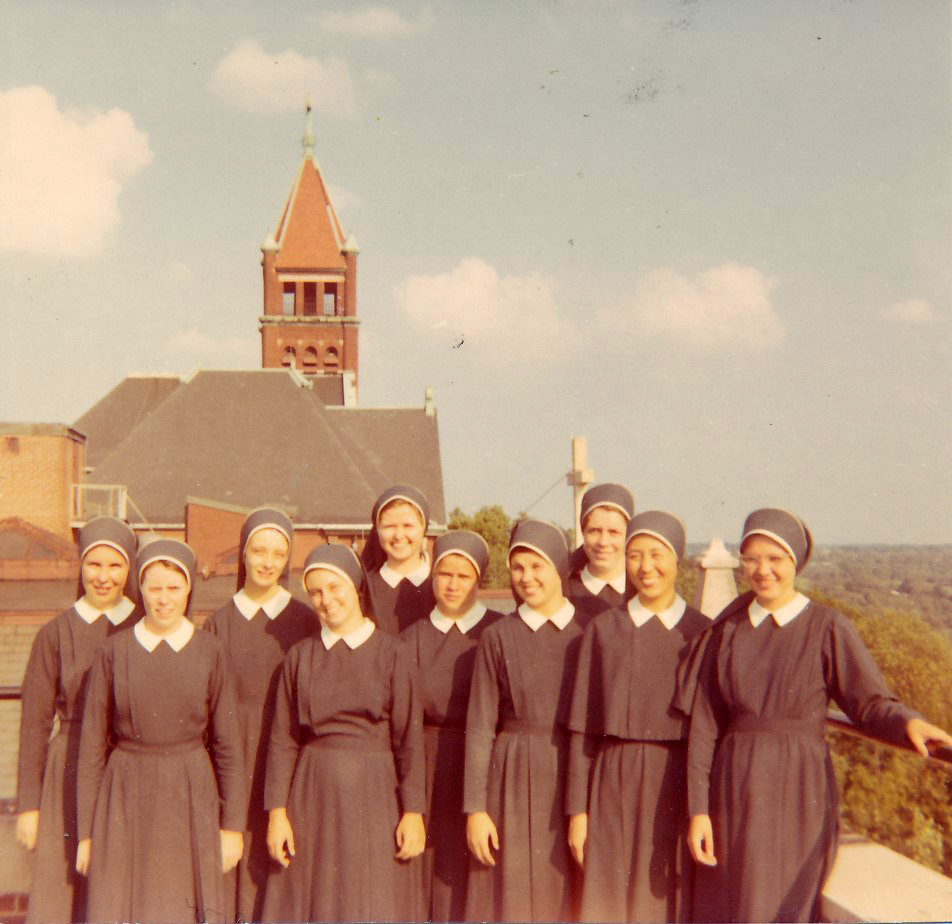 S. Pat Malarkey (back, third from left) and her Band members were some of the first in formation to live in and explore Seton Hall.

“In 1966, as a new second-year novice (this year was a new addition to the Formation program in 1966), we moved to the fourth and fifth floors of Seton Hall. My first response was ‘Wow! a room of my own!’ (As the only daughter growing up, I had a wonderful room of my own, so it took a while to adjust to snoring, crying, talking in sleep and a lot of restless noises from my roommates during postulancy and novitiate.)

“As we moved into the rooms, we had a few moments of trying to figure out where our few belongings would be going, and wondering how two college girls had been able to live in such a small space! Jean Bartling’s artistic gifts were on display as she turned her bed into a makeshift couch, and other fancy additions were included. We all thought it was very clever, but it was soon returned to ‘normal’ by the rules.

“Our Community Room was on the first floor, and since we were the first to use the space we were given a lot of leeway in organizing it. We had several creative people in our group and they soon had it looking and feeling very ‘homey.’ They were also good at decorating it for special holidays and other occasions. Sometime later my parents donated the baby grand piano that I had been plunking on while growing up. It was pretty beat up when it arrived in Milford several years before. After it was tuned, and ready to entice the next great female piano player, my parents decided that the black, chipped paint was unappealing, so Dad decided to paint it. The only paint he had at the moment was PINK! It worked well for many years, but on its arrival at the Mount, it was soon taken apart and refinished completely. When Karen Sheehan, or others played it, it sounded terrific and added to many of our celebrations.

“The ‘Dew Drop Inn’ was also on the first floor. It had served as the Home Economics department lab when the college was there before becoming a place for our varied cooking events and a ‘hang-out’ location. The best aroma was available when S. Mary Assunta and her sister, S. Kathleen Stang, baked their breads and rolls. I think we probably all volunteered to help with the clean up just so we could get a sample.”

“I spent many summers in Seton Hall working at Eldermount and planning Jubilee celebrations during the 1980s. I recall a Royal Wedding party we planned in July 1981. That summer Sisters in Seton Hall were invited to celebrate the wedding of Prince Charles and Princess Diana. On the evening of July 29 the Royal Bell Ringer, S. Ann Paulette Burger, and the Royal Town Crier, S. Gemma Glutz, dressed in their three cornered hats made out of arm chair covers, went up and down the halls announcing the wedding, and invited the Sisters on all three floors to join us on the fifth floor in the respective bedrooms previously assigned to them. The Sisters were directed to dress as their Royal couple for the wedding. Each room was furnished with a bag of goods such as sheets, pillow cases, towels, construction and gold paper along with two sashes for their couple. Each court then processed to the Royal Court Room located in the laundry room where they were judged by the three Royal Judges, S. Mary Catherine Faller and two other Sisters. Following the judging, the Royal Horsemen with mops for horses (I was one) led the procession down to the lounge where refreshments and the Royal wedding cake, made by the Royal Baker, S. Mary Catherine Faller, were served. It was a memorable night of fun and celebration. 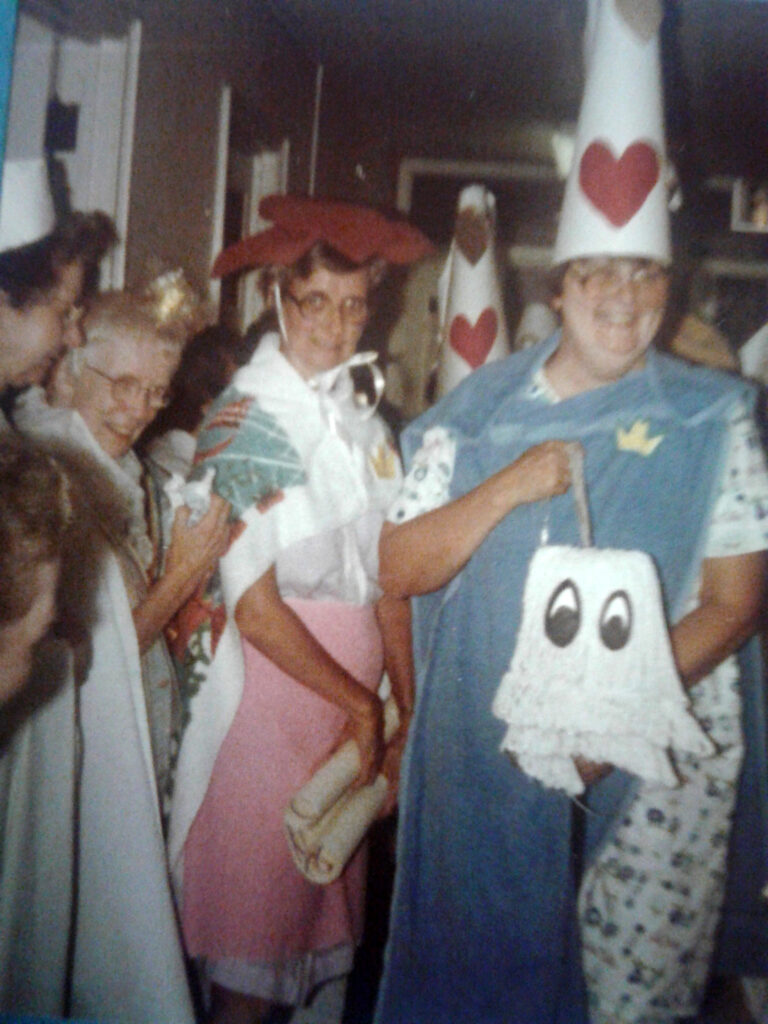 S. Pat Newhouse (right) planned a Royal Wedding party for the Sisters in Seton Hall in the summer of 1981. 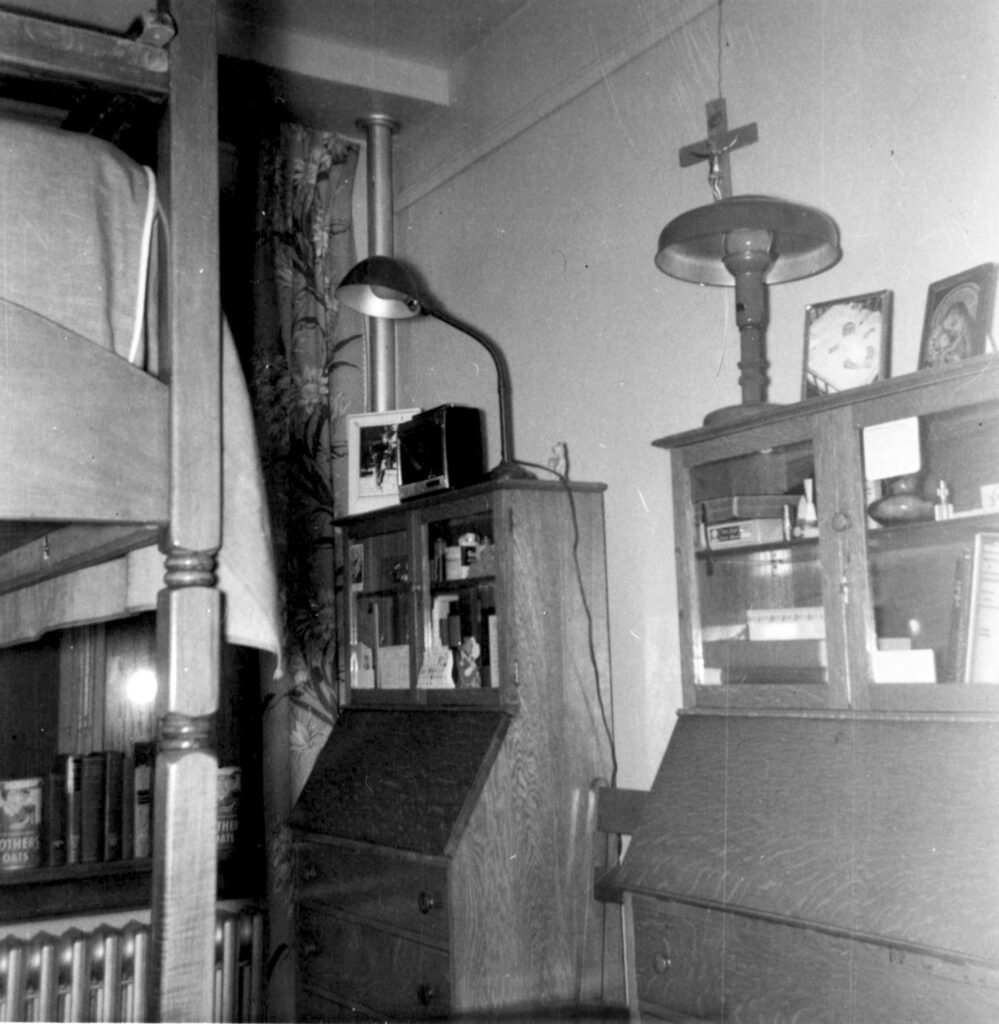 Dorm rooms received a good and thorough cleaning in the summertime, thanks to the efforts of young Junior Sisters.

“It was customary for the young Junior Sisters, when they came home for the summer from the school missions, to clean the areas where they college girls had lived during the school year. This included the marble in bathrooms and specifically all the shower stalls. I clearly remember coming home in the afternoon, from a day of summer session classes, to face the cleaning. I recall it took lots of scrubbing to remove all the soap residue, but it helped to not be asked to do it alone. As a reward from our hard work and very long day, we went off to the roof for an evening of square dancing with recorded music and S. Vincent DePaul Grillio as our caller. It was definitely a hot time in the olde town that night!”