The Sisters of Charity Spirituality Center came into being in the early 1980s. Persons’ increasingly busy lives caused them to seek quality ‘time away.’ The Church’s Vatican II applauded a desired call to incorporate spirituality into our day-to-day lives; this was true for lay women as well as religious. The Community decided Seton Hall was the ideal place for this new ministry endeavor that would offer SC hospitality, personal time away and accommodate overnight retreat programs. Sisters trained in spiritual direction and retreat programming responded to this call; they share their memories here.

S. Joseph Marion Shappelle and I began the Spirituality Center in 1981. S. Joseph Marion was there less than a year before she went to St. Boniface to work with the senior citizens there. S. Mary Gemma Gunn was my assistant. We were lucky because the Mary Reparatrix Retreat Center closed the year we began and so we got a number of women’s retreats from there which gave us a good start. When the women first went to their rooms on the fifth floor of Seton, they were a little surprised at the size of the rooms; when we told them that when Seton was a college two girls were in each room, they could hardly believe it! They enjoyed the fifth floor, especially the lounge. The floor was to be quiet after a certain time, but we had to monitor the lounge because they would get pretty noisy; they eventually got the idea. We usually had some simple refreshments before they went upstairs on Friday evening of weekend retreats. S. Carol Brenner joined me in 1991 and we became co-directors in 1992. I was in the back office on the right. Carol was in the back office on the left, April Vale was our first secretary and Micki Trentman followed her. The larger room in that area was used for spiritual direction. 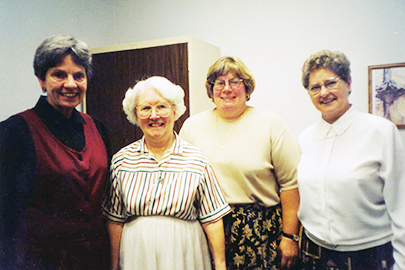 Sisters Carol Brenner (left) and Esther Marie Humbert (right) served as co-directors of the Sisters of Charity Spirituality Center in the 1990s.

Among my favorite memories of Seton Hall are the many retreats the Spirituality Center offered for women. A very popular one was the Tai Chi retreat led by Patricia Roberts. She blended Tai Chi with Lectio Divina and Centering Prayer and the women participating found it very enriching. Another favorite was a weekend retreat for a group doing a long process called “Finding God in Daily Work,” which S. Esther Marie Humbert and I facilitated. My sister, Jan Harvey, and I led a couple of weekend experiences. One was “Women in Scripture.” I can still see Jan dressed in her outfit with her basket telling the story of the mother of the boy with the loaves and fishes. The women loved it. There was always appreciation for time spent overnight to deepen the retreat experience. Rich sharing and changing perspectives were the fruit of that time together and friendships grew as well. Our offices were housed in Seton Hall (first floor where Transportation offices were most recently) and S. Marie Jerome Cremering was such a help with hospitality and nametags. We could not have done those retreats without her and Micki Trentman, our great administrative assistant, who still works in the Spirituality Center today.

After graduating from the New Mexico Academy of Healing Arts and receiving my Ohio licensing in 1997, I began alternating with S. Mary Lou Knapke, offering massages to retreatants through the Spirituality Center. Many weekends while at Samaritan Health Center in Dayton, Ohio, I would come to Cincinnati, stay overnight and offer massages to Sisters and retreatants. Sisters Ester Marie Humbert and Carol Brenner invited me to become a member of the Spirituality Center. In September 1999, I joined them and Room 300 in Seton Hall was my massage room. I would greet clients, take them up to the third floor, escort them out of the building following the massage, return to Seton and prepare for the next client. I am certainly glad I was young when I did that! My first ‘office’ was a student desk and chair in Seton Hall outside the Spirituality Center. In May 2001 S. Barbara Hagedorn offered me a new space for massage – Marian West 143, which had previously been the room where S. Bonaventure Schmeidler helped prepare nursing students for their licensing exam. My first visit to the room had a hospital bed with a ‘patient,’ IV poles and other medical supplies. After almost 19 years in this room, where I was richly blessed by my clients, I look toward 2021 to my new space and adventures in the former Assisted Living Nursing Station in St. Mary’s Hall. As I finished packing up my massage room, I said a prayer of gratitude and asked God’s blessing for the new occupants. 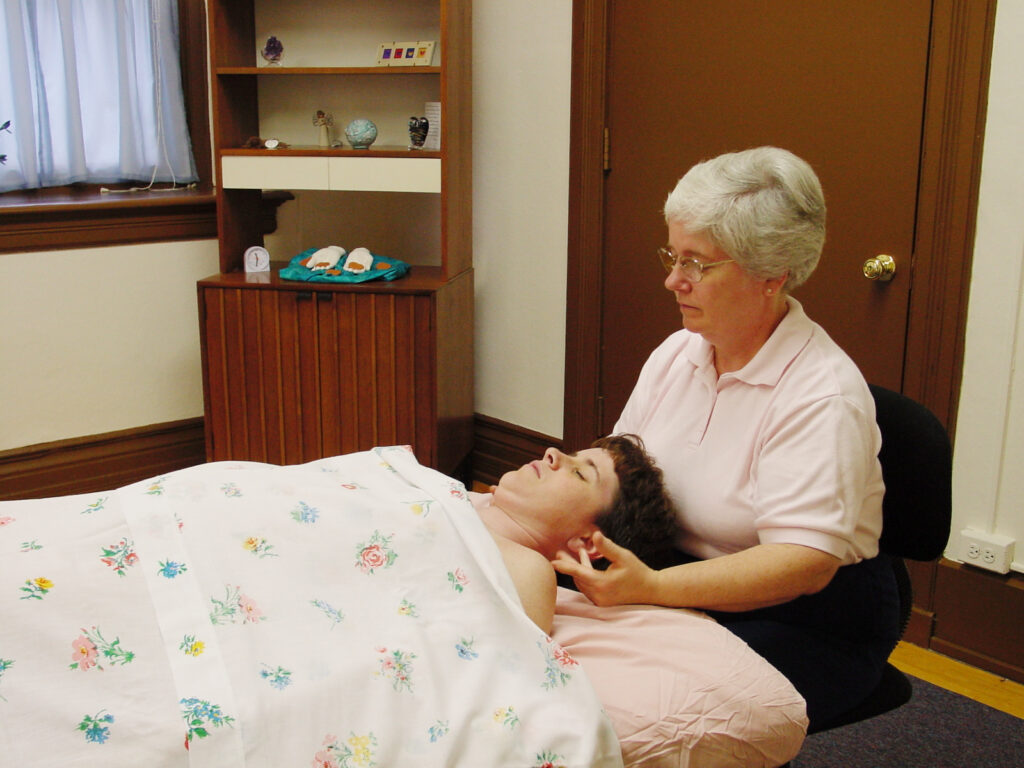 S. Mary Fran Davisson has been the licensed massage therapist for the Sisters of Charity Spirituality Center since 1999.