Our Sister of Charity Legacy of Caring for the Homeless 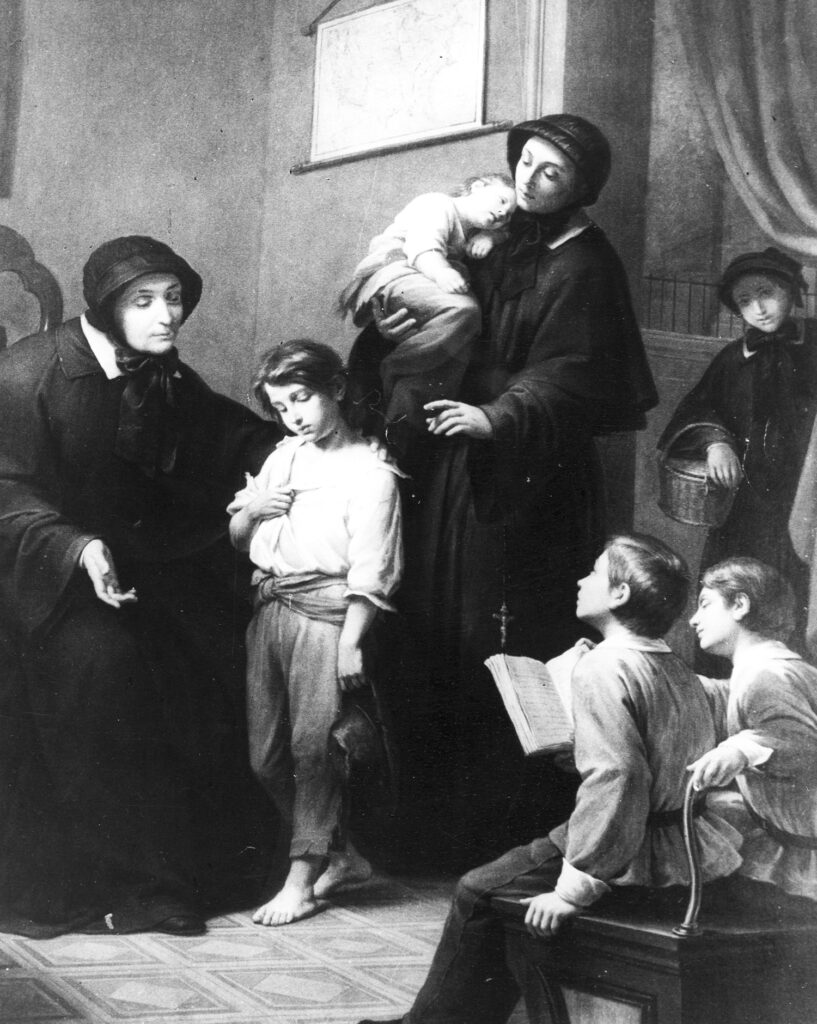 When a small group of women gathered around Elizabeth Seton in Emmitsburg, Maryland (1809), they pledged themselves to care for the most needy, especially through education and the care of homeless children, and soon these Sisters of Charity began their ministries that expanded throughout the country. Invoking the charity charism of St. Vincent de Paul, they embraced the spirituality of finding God in all persons, especially the poor.

Even before they established a boarding school at St. Joseph’s in Emmitsburg, the Sisters opened a free school and a ‘St. Joseph’s class’ to receive orphans. They also regularly visited the poor and sick in the neighborhood, and took in three widowed mothers of the original members of the community.

Within a few years they were invited to Philadelphia and New York to open orphan asylums, focusing particularly on orphan girls left homeless by the casualties of immigration and periodic epidemics. During epidemics, asylums previously housing 50 or 60 orphans had to provide for several hundred. By the time the Sisters arrived in Cincinnati in 1829 they had already opened 10 orphan asylums.

St. Peter’s in Cincinnati started with five orphans but the number jumped to 34 when cholera hit in 1832, and by mid-century had 150 young ladies residing there. Additionally, in 1842, the Sisters assumed responsibility for St. Aloysius Asylum for German boys, but this ministry was short-lived.

When S. Margaret George arrived in 1845, she brought a lifetime of experience working with orphans, and a love for children as shown by her letters and many pictures, stories and verses preserved in her scrapbooks. She transformed St. Peter’s by overseeing the building of three additions along with interior improvements that included warm water baths and new furniture to accommodate. During the 1849 cholera epidemic, five children under the age of 7 died. To Margaret they were “not to be given up without a sigh, nor without a tear.” During the epidemic the asylum was full to overflowing and, much to their sorrow, the Sisters had to place a temporary halt on admissions.

When the orphan girls attended a ceremony at St. Peter’s Cathedral, they “dressed in new and beautiful attire, [and] looked the picture of health.” Friends described St. Peter’s as a “school of good manners” and noted that “the good government of this little kingdom [was] truly incomparable.” The girls’ “neat white aprons” and “well-washed hands and faces” impressed visitors as did their “laughter and merry-making.”

S. Anthony O’Connell, who arrived at St. Peter’s in 1837, played a major role in the more than 30 years she served there. One of her special duties was making rounds at the markets begging for food for the asylum. Many stories tell of her dauntless efforts despite ridicule and prejudice. In 1852, she was named director of the new St. Joseph’s boys’ orphanage. When a larger facility that combined the boy and girl orphanages was built, she was placed in charge, doing a stellar job managing a facility for nearly 300 orphans.

Later, when S. Anthony was in charge of Good Samaritan Hospital in Cincinnati, she again reached out to the poor in the form of “erring young women” and their “illegitimate infants” by founding St. Ann’s Home for Destitute Widows and Females.” When 56 foundlings were received the first year, she secured a beautiful home for them on the outskirts of the city, and overcoming suspicion and accusations, she saw it grow into a thriving infant and maternity home.

From Elizabeth Seton to Margaret George to Anthony O’Connell, this legacy of caring for the homeless and marginalized was the cornerstone – a firm foundation – that has been built upon by succeeding generations of Sisters of Charity.