This week we share three Sisters’ memories of living in Seton Hall; one while in formation, another as a 20-plus-year resident and the third as a guest and frequent visitor to Mount St. Joseph. May their memories help you recall some of yours. It is good to remember the love, laughter and learnings.

“As I lived away over many of my years in the Congregation, Seton Hall meant many things to me: a gathering place; a homecoming space for Chapters, Congregational Days, vows, jubilees, Community retreats, meetings and sometimes just to come “home”; airplanes that seemed to fly in your window as they roared overhead in the early morning hours; and a place and time of sisterhood and community and connection.

Snacks in the kitchen;
Hugs in the hallway;
Relaxing on the roof, maybe with LaRosa’s and some adult beverages;
Laughter and noisy catching up as we greeted one another;
Debriefing the day’s events in the lounge or maybe over a stockpile of food in the kitchen, pulling in more chairs around the table as the laughter echoed down the hall;
Searching for corkscrews or something among the variety of mismatched kitchen utensils in the drawers;
Early morning chatter after showers over hairdryers and borrowing toothpaste or contact solution or whatever you forgot;
No breeze in the summer as we pondered the idea of slumber parties in the lounge to sleep with the AC;
Deep conversations about our lives, our dreams, our struggles.

“The rooms reminded us all of a simpler time when you didn’t need five outlets for computers, phones, blow dryers, etc. There was always a touch of sadness at the wastebaskets in the hall as we all headed until the next time we would meet again. I will miss the gathering times and spaces, the long lounges with the Lazy Boy arrays. I am grateful for these times and for these spaces.”

Seton Hall has been known to Sisters of all ages as a place of gathering and for community and connection.

By the 1960s Seton Hall became home to formation groups living on floors 3, 4 and 5.

Mary Alice Stein entered the Sisters of Charity in 1959 and Seton Hall was ‘home.’ The building had recently been vacated by MSJ students moving to the new college campus across Delhi Road, and became home to formation groups’ living on floors 3, 4 and 5.

“My memory of Seton Hall is from 1962. I was a second year junior Sister and I was asked to help box up equipment from the Chemistry Lab and then carry the boxes across the road to the new College of Mount St. Joseph campus. After the college items were moved we were able to move to Seton Hall. My bedroom was on the third floor while the first year juniors were on the fourth and fifth floors. I recall the first floor was the Dew Drop Inn where we could go to unwind and relax after classes or in the evening. In the basement was a large area where we met as a group for instructions and recreation; sometimes we Band members were asked to play our instruments as the music for dances.”

Marge Farfsing lived in Seton Hall, fourth floor, for 24 years. She remains most grateful for the invitation, initially given by S. Ann Patrick Lynch, to live at the Motherhouse following a bout with cancer in 1985.

“I [S. Georgia] recall a warm feeling of hospitality – Sisters, retreatants and visitors – any time we stayed overnight in Seton Hall in the mid-1980s and 1990s. It was the fourth floor where the Motherhouse community of Sisters who lived there welcomed us and made us feel ‘at home.’ They had our name and ‘Happy to see you’ on your door, welcoming information on the bulletin boards as we came off the elevator, snacks and drinks in the kitchen and a TV schedule in the lounge. It was during another time of ‘opportunity’ for us, where Sisters could choose to live in different areas of the Motherhouse. These SC women chose to live and create community on Seton 4 and minister part-time in various areas of the Motherhouse, the College Reading Lab and in Mother Margaret Hall. Some of the women living there were: Sisters Gertrude Jean McMahon, Mary Joseph Koverman, Giovanni Vastano, Gertrude Ann Deye (all of whom are with God), Associate Barbarajene Williams and S. Marjorie Farfsing. I remember S. Mary Joseph as the community coordinator. She was affectionately referred to as Mother Bear and the others as her cubbies. They loved welcoming their Sisters and getting to know us as we came for ‘overnights’ due to meetings, retreats, Chapters, discernments, social visits, etc.” 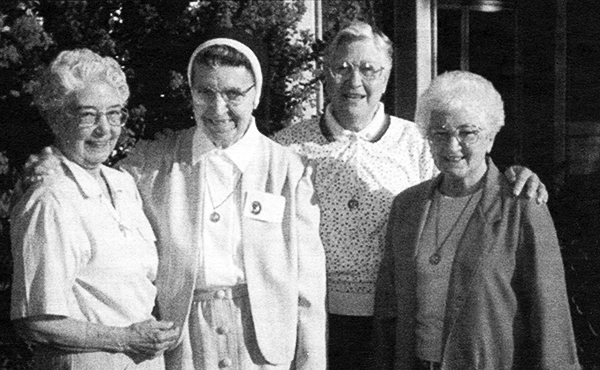 S. Marge Farfsing (second from right) moved to Seton Hall in 1985 and was a resident for more than two decades.