This week we share the beginnings of our Associate program and the initial planning of Bayley Senior Care – and let’s not forget the beginnings of the computer age taking place in Seton, as well. What blessed happenings the building has birthed in her time!

“My Seton Hall memories go back to the day in 1951 when my parents drove me to the Mount to begin my college education. Little did I know then that one day I would have an office in Seton Hall. In the mid-1980s, urged by the Spirit, the SCs responded to a call to serve the elderly. Our response initiated the beginnings of Bayley. Under the leadership of Sisters Maryanna Coyle, Mary Assunta Stang and Roslyn Hafertepe, we became engrossed in the feasibility of the vision. We were looking at the need, market and usage of the land where Bayley now exists. S. Mary Assunta and I both worked in offices on the first floor of Seton Hall. It was there that we met with individuals such as contractors, marketing representatives, architects, lawyers and specialists in gerontology. I was the congregational representative for the development of Bayley. One might say that Seton Hall was the ‘birthplace’ of Bayley. Much time was spent at meetings with individuals we depended upon in order to plan, study and implement the beginnings of a new ministry that would serve the aging population. Prior to its opening, space in Seton Hall’s basement was used to store furnishings and supplies that arrived before being able to be placed at Bayley.

“The Bayley project was a challenging and enriching experience that I treasure. The people I met on the journey hold a special place in my memory. As I reflect on those who advised and accompanied us on the initial stages of the journey, I see many of them as ‘associates’ in our mission. One in particular was Maria Dwight, gerontologist who died recently. In her obituary she was referred to as a trailblazer, a social justice advocate, and world-renowned visionary in the field of ‘aging.’ She was an ‘associate.’ I learned another truth: as our numbers decline, our ministry can continue to evolve because of lay leaders and associates who share our values. We have examples of this in each of our sponsored ministries.”

Bernadette Schmitt was the congregational representative for the development of Bayley, spending much time in Seton Hall planning, studying and implementing the beginnings of the ministry.

“When we as a Community were entering the ‘Computer Age,’ we began by establishing a Data Team to plan and implement our conversion to the newest computer systems that could best serve our needs, working with Cincinnati Good Samaritan Hospital. As the Treasurer for the Community, I could see that S. Francis Clare Pavioni was functioning as a key member of this team, using her experience from Good Samaritan. The team worked out of offices in Seton Hall on the second floor, adjacent to the other offices who were providing all the Community Financial Services such as auto insurance and health insurance programs. Then, and up until now, Seton Hall has provided a home for many important activities in the success life of the Sisters of Charity. We remain grateful for all the persons who have contributed, lay as well as religious! Some of those generous Sister volunteers include: Sisters Helen Berson, Marion Agnes Boeddeker, Shirley Dietrich, Marie Antoine Humbert, Ann Koebel, Rita Margaret Kroger, Grace Murphy, Barbara Muth, Patrick Ann O’Connor, Rosina Panning, Francis Clare Pavioni, Therese Ann Reis, Agnes Schaumleffel, Thelma Schlomer, Rita Schmutte, Ann Rosaire Simon, Mary Assunta Stang and Pat Wittberg. What a wealth of generous hearts!”

“My major memories [of Seton Hall] come as I spent five years (1992-’97) as our first congregational director of the Associate program. I began with one inquiry on my desk, thus starting the chain of events: contacts, interviews, inquiries, committee meetings, small gatherings of those interested. During these initial five years, interest and clarity emerged as to what was desired. Seton Hall can surely be responsible for the birthing! The idea of our first Associate Convocation was conceived on S. Mary Loyola Matthia’s back porch as we met with Associates in Mission from Florida; most of the planning and many meetings took place in my office, in the Seton Hall first floor meeting room and even in the Rose Room. As I traveled to meet Associates in Mission around the country, I realized that most had never been to the Mount. Approximately 120 Associates and Sisters gathered in late July 1995 for the first-ever Convocation of Associates in Mission and Contact Sisters. S. Eugene Fox, whose office in Communications was just down the hall, assisted greatly as we developed and published the frequent newsletter, Associates Connect. It helped to keep the Associates in Mission, Associates in Volunteer Ministry and the Sisters from around the country in touch with each other even before the Internet was widely used.

“As I reflect on the role of Seton Hall in my life, I cannot forget how welcoming the Sisters who lived on the fourth floor in Seton were to me when I came home to the Mount for meetings as well as during some very difficult times in my life. I always knew I had a place of welcome – and a place to call home. For that I am deeply grateful. I hope Sisters in the future will feel the same, even though Seton Hall will have been part of our memory and our history.” 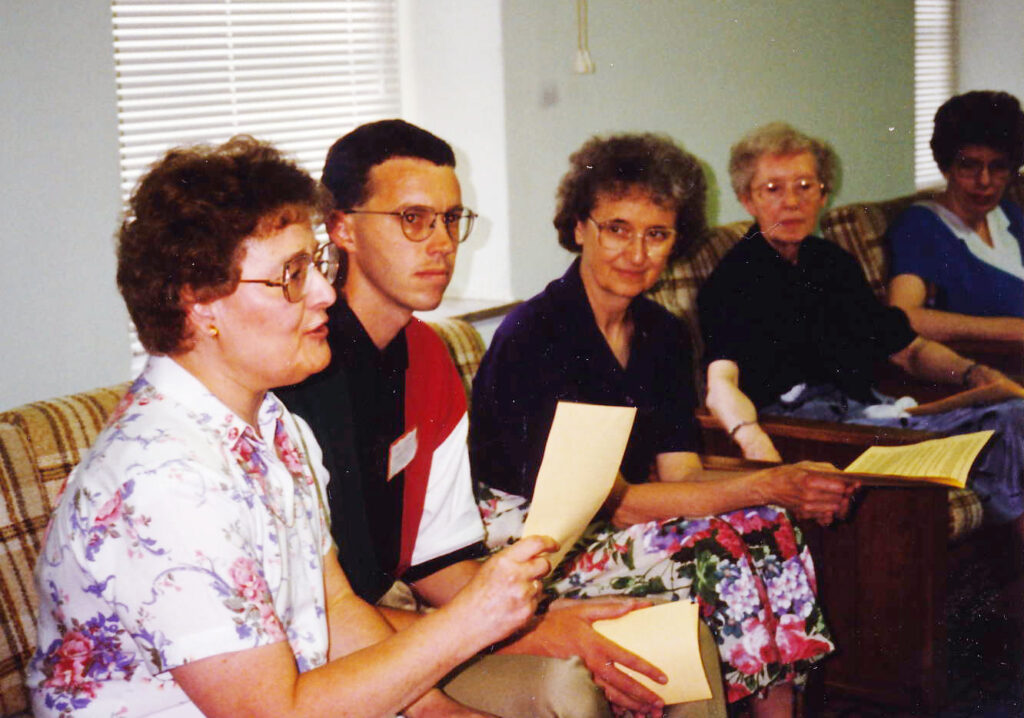 With an office in Seton Hall, S. Rita Hawk (left) was the first congregational director of the Associate program.