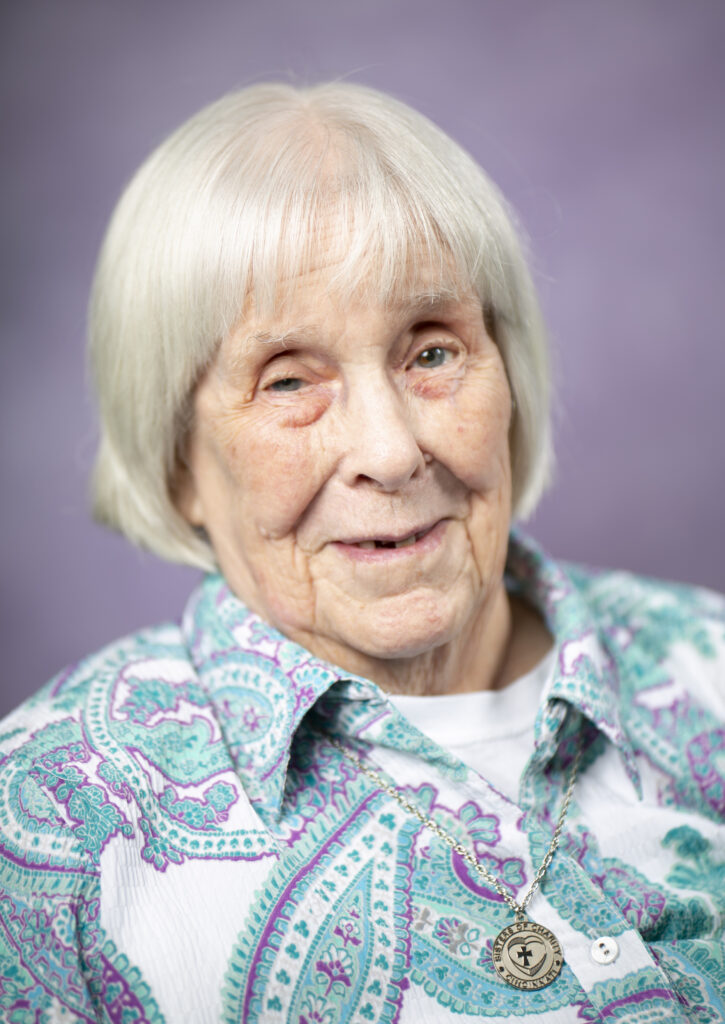 S. Michael Mary Eagan died Dec. 13, 2020, at the age of 93 in Mother Margaret Hall, the nursing facility for the Sisters of Charity. S. Michael Mary was born Margaret Grace Eagan on March 2, 1927 to Charles W. and Martina (Book) Eagan in Cincinnati, Ohio. She was one of seven children, four girls and three boys. She was a Sister of Charity for 75 years.

S. Michael Mary grew up in Cincinnati, attending St. Matthew grade school, Norwood, and St. Mary High School, Hyde Park, graduating in 1944. She was taught by the Sisters of Charity all 12 years. She would say that being a Sister of Charity was “rooted in my being; they encouraged my personal growth, interest in the missions as well as leadership qualities.” She entered the Community on Sept. 8, 1945.

S. Michael Mary earned a Bachelor of Arts degree in education from the College of Mount St. Joseph in 1958 and a master’s in social work from The Catholic University, Washington D.C. in 1968.

S. Michael Mary began as a primary teacher at St. Aloysius, Fayetteville, Ohio in 1947; from there she was sent to St. James, Bay City, Michigan (1949-‘51). In 1951 she became very ill and was diagnosed with tuberculosis; she was sent to Penrose Hospital, Colorado Springs for treatment. After two years of struggle with the disease her health was restored. She resumed her classroom role, teaching in Colorado and New Mexico. In 1953 she taught intermediate students at San Felipe, Albuquerque, New Mexico (1953-’56) before heading to Cathedral, Denver (1956-’58); Sacred Heart, Denver (1958-’64); and St. Mary, Albuquerque (1964-’66) as principal. She then became a full-time student at The Catholic University; it was there that her passion and commitment to social justice bloomed.

After graduation in 1968 Sister Michael Mary returned to Denver and began a ministry to poverty-level families which would span four decades. She began as a social worker with Catholic Charities and then as the director/administrator. Her gifts as a creator and community innovator were readily visible. She founded the Aurora Colorado Housing Authority and was instrumental in developing the Mile High Child Care Association. She consistently advocated for transitional housing. In 1987 she became interested in SHARE (a food and community network) and began the first chapter in Colorado, gaining the support of state and city leaders before it could happen. She would say, “SHARE makes bridges … and meets the needs of many people with quality foods. Keeping to the goals of a diverse caring community, we will make a difference for those within our midst.” S. Michael Mary was honored with the SHARE ‘Visionary Award’ in 1993.

Looking back S. Michael Mary loved her ministry to families in poverty, ever working to meet the needs across all financial and color lines. She became widely known in her later years for Little Flower Center which was completely run by volunteers and supported by Aurora parishes and grants. It ministered to the needs of persons in transition, many desiring to come out of homelessness. People from the area could come to the center to bring items they no longer needed or to obtain basic needs that would allow them to have a home. At the same time S. Michael Mary greeted each visitor as an equal, recognizing them as persons loved by God. Like Elizabeth Seton she desired to be ever-present to the people, seeking personal interaction. In 2002 she was honored as Aurora’s ‘Citizen of the Year.’

S. Michael Mary came to the Motherhouse in 2012 to retire and renew friendships with her Sisters. She enjoyed writing and reading poetry and found great peace in nature.

Her close friend, Associate Lee Hemminger, shared, “Since 1968 S. Michael Mary has been a special friend, mentor and listener. As a volunteer in the project area in Denver, she was my supervisor and taught me so much. Her love and care for the poor was deep, sincere, and catching. She went to bat for me with Catholic Charities when I applied to adopt my beautiful daughter, and she came to our home for the baptismal Mass. Her sense of humor was one-of-a-kind. She shared her deep devotion to God with all who knew her, and was my companion when I was preparing to become an Associate.”