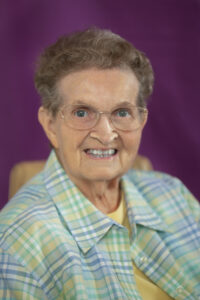 S. Janet grew up in Cincinnati, Ohio, attending St. Mark grade school in Evanston and graduated from St. Xavier Commercial High School in 1951. She worked at Colonial Finance Company, Cincinnati when she felt the call to religious life. She entered the Sisters of Charity on Feb. 2, 1952.

S. Janet’s ministries included more than 55 years in classrooms, either with primary grades or after-school programs working with the learning disabled. She began at Margery Reed Nursery/Day Care in Denver, Colorado in 1953. In 1956 she was sent to teach at St. Francis, Pueblo, Colorado, where she remained until 1960. She taught at Holy Trinity, Trinidad, Colorado for the next 10 years. In 1970 she went to St. Therese, also in Pueblo, followed by a year at Holy Cross in Thornton, Colorado.

It was at this time that S. Janet began a 40-year ministry to the poor and marginalized families of Loyola School in Denver, Colorado (1972-2011). As their primary grade religion teacher, special reading and special education/after-school program educator, she viewed teaching the children ‘as a privilege and a great gift.’ At the heart of her ministry S. Janet saw giving children knowledge and the love of Jesus in their lives as central to her call to teach.