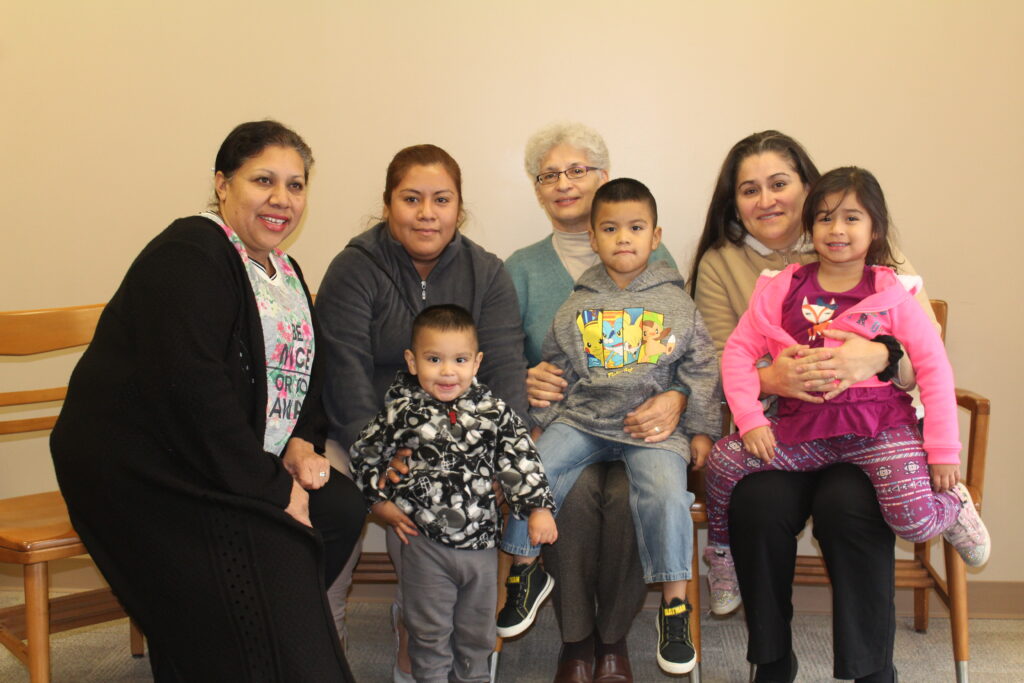 For 12 years S. Juana Mendez served as the Hispanic minister for the Diocese of Covington, Kentucky, advocating for and providing services for the Hispanic/Latino community.

She found herself a single parent. Life is many times more difficult when you must make all the decisions for you and your children alone. Words like “poor,” “uncertain,” “fear” can become a daily part of your life. She looks out across the wide expanse of water lifting her heart skyward remembering she must trust in God.

Her womanhood, her children, the loneliness, the ever-present water, her God. If you were to guess what was to come next, you might say you were about to hear the story of Saint Elizabeth Seton (EAS). Very understandable! Saint Elizabeth was a single parent and bore many of the same burdens and fears. She cared for not only her five children, but could be found helping other mothers and their children. She often lived where she could look across the water. And to the core of her being, she trusted in God.

But, no, this story is about our 2020 silver jubilarian, S. Juana Mendez. Her story reads a lot like our dear Saint Elizabeth. S. Juana has this to say of their similarities, “She (EAS) dedicated her life to the services of the community, devoted a great deal of time to work with the poor, and provided free education for girls. Her desire to grow in a deep relationship with Jesus was evident in her work and style of living.”

S. Juana Mendez was joined by her two brothers, sister and mother when she professed final vows 25 years ago.

S. Juana was one of four children born to her family in Puerto Rico. Times were hard. But she has beautiful memories of kneeling on the hard concrete floor, saying the rosary every morning as a family. While eating their breakfast of bread and coffee, S. Juana’s mother spoke to them about trusting in God. Her mother raised them to build their hope on faith. Never to stay in a place of fear. Saying the rosary was a daily reminder that God dwelled in and among them.

When S. Juana was 8 years old, the family made the arduous move to Cleveland, Ohio in the San Juan Bautista parish. She attended St. Francis elementary and St. Peter’s High School. S. Juana recalls, “I loved to serve. As a young girl I knew I was being called to a religious life. However, I took the long road.”

Part of that long road was marriage, motherhood and single parenthood. S. Juana recalls, “It was a struggle to raise my children as a single mother. With the help of my family, and with lots of prayers, my children attended Catholic schools; two out of three attended college. They were active in the Church. My daughters played the guitar in choir and my son was an altar boy. As a family we attended Mass together. I have a close relationship with my children. I have six grandchildren that I get to talk to almost every day.” 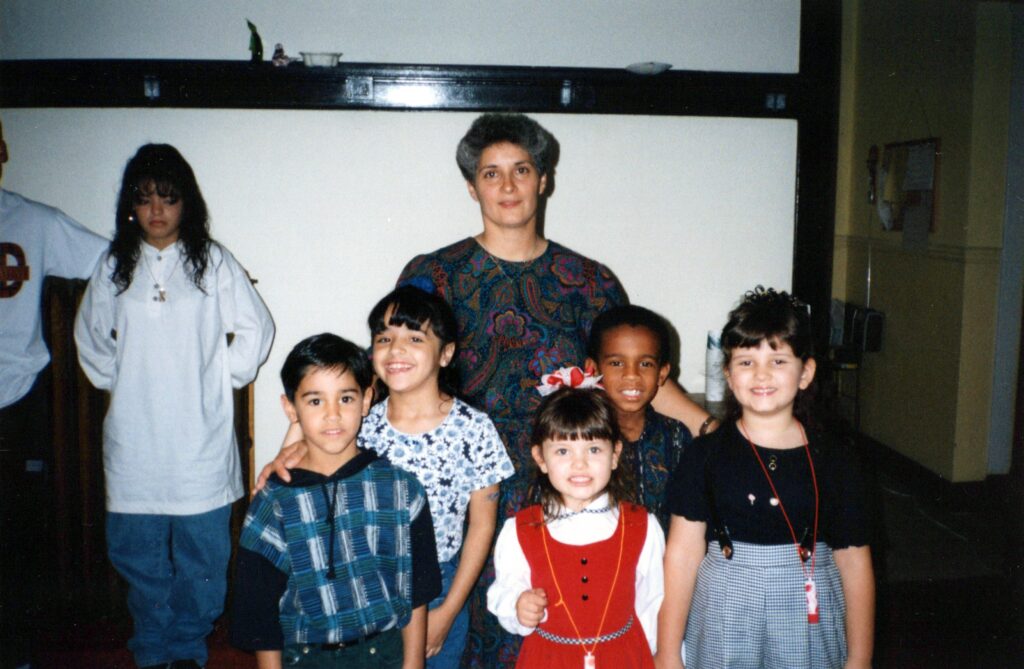 S. Juana served as a youth minister at San Juan Batista parish in Cleveland, Ohio, in the 1990s.

S. Juana found employment with the Cleveland City Public School system. She performed clerical duties there for many years working her way up to a supervisory position. She continued attending San Juan Bautista parish. S. Juana picks up the story:

‘”I was searching for others who had my vision and I found the Sisters of Charity. I met two women who dedicated their lives in making a difference in the lives of others.” Those two Sisters were Sisters Florence Cremering and Ann Dorenbusch, who served at the parish and had asked S. Juana to become a Catechist. They formed a deep and lasting friendship. They also journeyed with her during her discernment process.

S. Juana’s pre-entrant year was spent as a Marianist volunteer. Later she lived one year in Parma, Ohio, at a house with other Sisters of Charity. Before entering her novice year she worked with S. Maureen Heverin.

S. Juana’s novice director, S. Mary Bookser, sums up S. Juana’s story best, “S. Juana Mendez has a heart centered in love for God and for people in need. Her life experiences and her bilingual abilities allow her to minister to our immigrant sisters and brothers in a manner few of us can. Her quiet, loving response to their needs, as well as her willingness to stand up against a system which unjustly ignores and denigrates people in poverty, makes her an invaluable support to so many who live ‘on the margins.’ She lives out our beautiful Mission Statement which calls us to ‘act justly, to build loving relationships, to share our resources with those in need …’”

S. Juana is a true living example of our charism as she walks “in humility, simplicity, and charity” and as she has dared “to risk a caring response” throughout her 25 years as a beautiful Sister of Charity. She became Sister of Charity Juana Mendez on Aug. 1, 1995.

“My passion has always been to help those in need regardless of the consequences,” S. Juana said. “Like Saint Elizabeth Seton, I founded a low-income center for the Latino community. In 1999, I was hired at the Diocese of Covington, Kentucky, as a pastoral associate. In the last 12 years I was the Diocesan Hispanic Minister. As such I advocated and provided services for the Hispanic/Latino community. I dedicated the majority of my ministry to doing immigration services. I have a BIA Accreditation[1] approved by the Immigration Board of Appeal to practice immigration law. 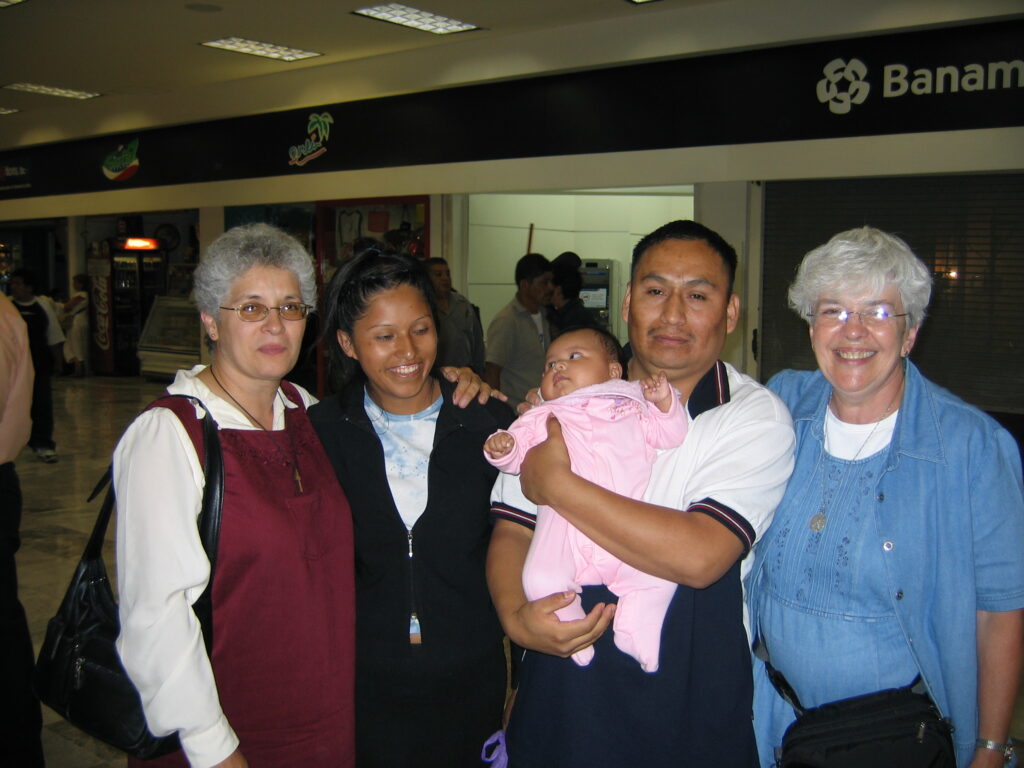 In 2006 Sisters Juana Mendez (left) and Mary Kay Bush (right) traveled to Mexico City to deliver Baby Yasmine to her parents who had been deported.

“One positive encounter that I will always remember is when I had to travel to Mexico City, with S. Mary Kay Bush, to take a three-month-old baby to parents who had been deported.”

In March, 2020 S. Juana began working at St. Michael’s parish in Cleveland, Ohio, as the pastoral minister. This is a multicultural community where she ministers to the Hispanic community including some immigrants.

“My life will always be in service to the poor and culturally marginalized,” she concludes.

[1] A nonprofit that wants to provide legal advice to immigrants or represent them in legal proceedings needs to have a lawyer on its staff or be recognized by the Board of Immigration Appeals (BIA). “Recognition” is permission to offer the legal services. “Accreditation” is permission for a particular staff member to provide the legal services. (Sourced from Google)