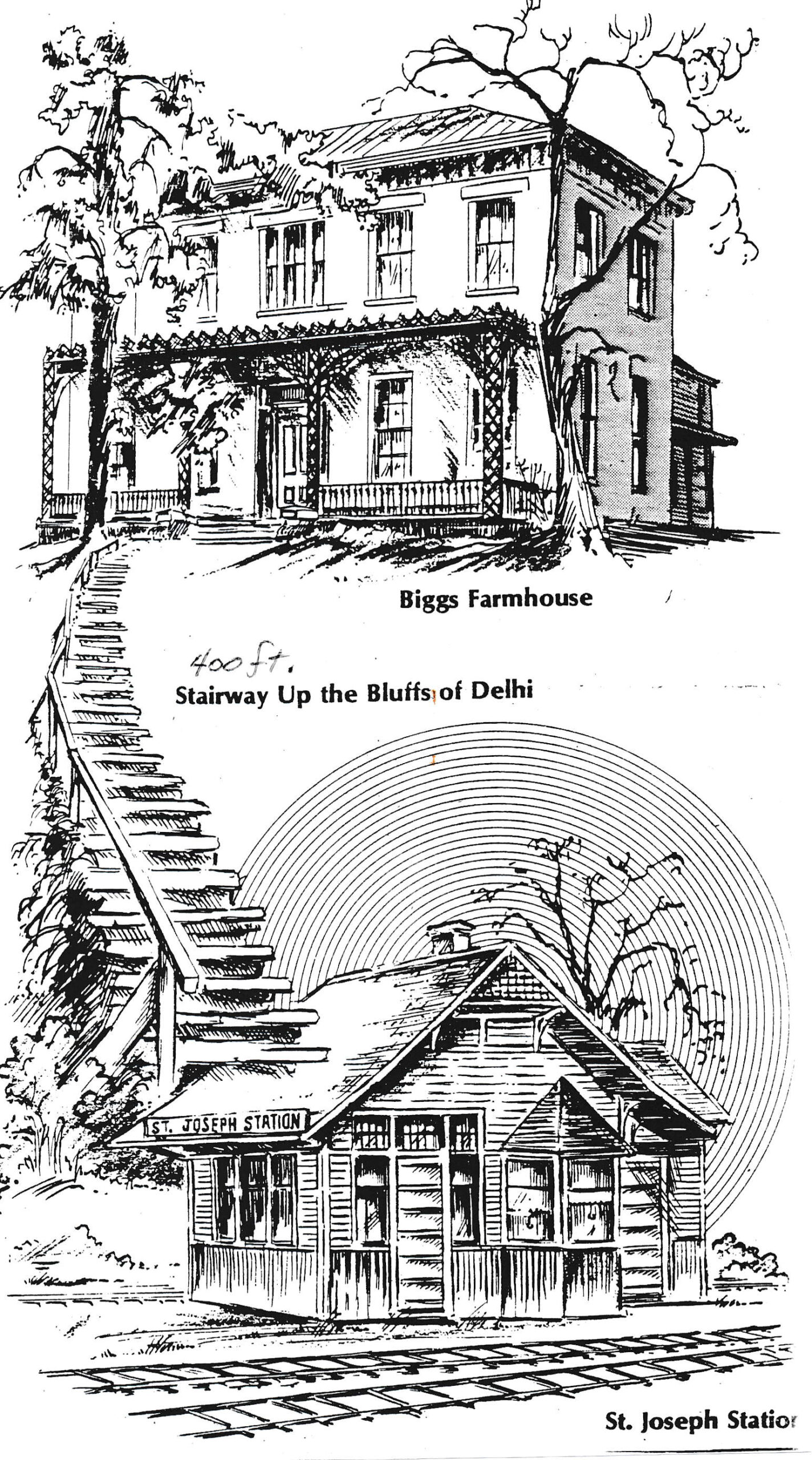 This sketch of St. Joseph House and its property begins at St. Joseph Station with a 400-foot stairway leading up the Bluffs of Delhi to Biggs Farmhouse, home to St. Joseph’s Motherhouse in 1869.

This year the Sisters of Charity celebrate the 150th anniversary of their move to Delhi. The Academy at Cedar Grove was too small, and the novitiate was increasing year by year: a new Motherhouse was needed. S. Anthony O’Connell, who knew the owner of a property in Delhi Township, rode out with Mothers Regina Mattingly and Josephine Harvey to investigate the prospects. They were all impressed with the land and its beautiful vista overlooking the Ohio River. Negotiations with the owner and the approval of Archbishop Purcell resulted in Biggs Farm becoming St. Joseph’s Motherhouse in embryo on Sept. 29, 1869.

Soon the postulants and novices moved into their new two-story red brick farmhouse, with its iron-work cornices, that was named St. Joseph’s House. According to S. Mary Agnes McCann, “The early days of Emmitsburg were repeated when the Sisters used soap boxes for chairs, dishes that baffle description, shuck mattresses, and all things in harmony or discord. When the novices went to church at Our Lady of Victory their vehicle was a jolt wagon and the road was hilly and circuitous. ‘Bruises? They’re nothing, darling. Put a little cold water on them,’ Mother Josephine, Mistress of Novices, would say.” The young Sisters enjoyed their new home of 97 acres of farmland and orchards, and began a long tradition of picking apples and peaches at the end of each season and enjoying the fruits of their labor.

It wasn’t until March 19, 1870 that the first Mass was offered there by their chaplain, Rev. Thomas Byrne. Dedicated to the Sisters, he often left the Seminary (in Price Hill) at four or five o’clock in the morning, said Mass, and was back in time for his eight o’clock class. During the summer he would spend his days teaching the Sisters religion, the sciences, languages, rhetoric and higher mathematics.

Interestingly, four future mothers of the Community made their novitiate in the “old farmhouse”: Sisters Mary Blanche Davis, Mary Florence Kent, Mary Bertha Armstrong, and Irenaea Fahey. S. Evelyn Dee recalled a memorable time during her novitiate in 1880 when S. Anthony O’Connell was removed from her position at Good Samaritan Hospital. Surprised by the news, Joseph Butler Jr., son of the donor of the hospital, announced he was coming to the Motherhouse to see about it. “We novices heard that Mr. Butler was coming. We ran to the window and watched for him. The carriage drew up; Mr. Butler leaped from the carriage and ran up the steps. Soon, the novices could hear Mr. Butler pacing the floor, scolding and objecting to S. Anthony’s change. Gradually his voice subsided and he came to agree with the opinion of the Superiors.”

Through the years St. Joseph’s has been put to many uses and seen many Sisters come and go. Who of us do not have our own memories of this first Sisters of Charity home in Delhi?