“… Sometimes I thank God for unanswered prayers
Remember when you’re talkin’ to the man upstairs
That just because he doesn’t answer doesn’t mean he don’t care
Some of God’s greatest gifts are unanswered prayers. …” 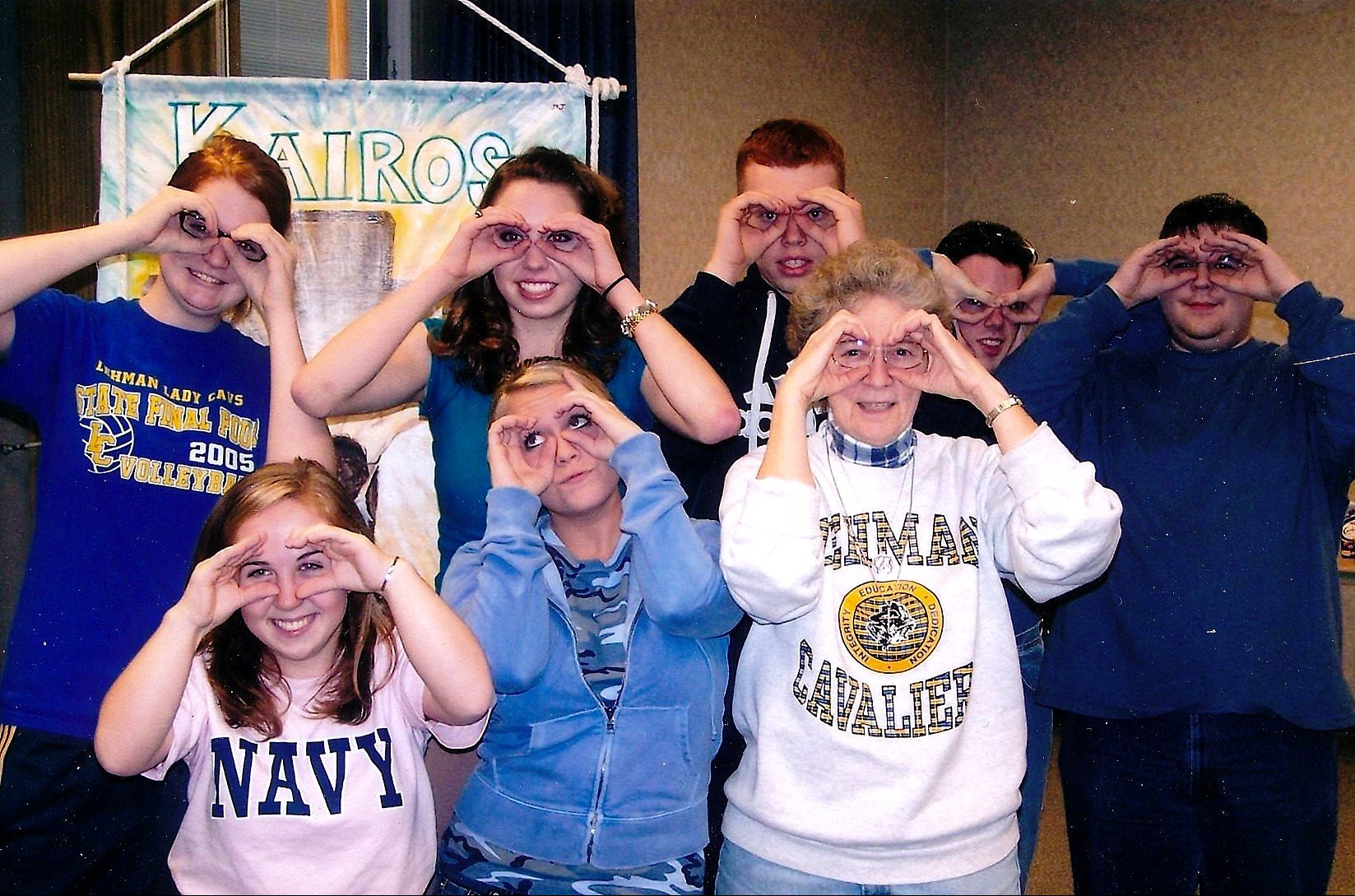 As the senior class advisor for many years at Lehman Catholic High School, S. Ginny Scherer has had the opportunity to be involved in the senior Kairos retreats.

The lyrics in Garth Brooks song “Unanswered Prayers” have long held special meaning to Sister of Charity Ginny Scherer. The long-time Lehman Catholic High School chemistry teacher said that as a student at Seton High School in Cincinnati, she was convinced she would become a nurse. God had different plans. “I didn’t want to be a teacher but that was where God wanted me to be and that’s where I ended up,” she says. “It’s been 58 years this year and I’m still happy!”

While she may not have originally known that her destiny would be to teach, she soon realized it was what brought her joy and purpose. As a freshman at the College of Mount St. Joseph and newly entered Sister of Charity, it was S. Ignatius Sanche’s chemistry class that changed her mind. S. Ginny credits Sister’s enthusiasm with what led her to fall in love with the subject and after that there was no looking back.

Following graduation from the Mount, S. Ginny began her teaching ministry in Michigan at St. Louis High School in Mount Clemens. She was then sent to Archbishop High School in Kettering followed by Holy Angels High School in Sidney. S. Ginny was involved in the consolidation that began Lehman High School in 1970. She left for 10 years to teach and serve as co-principal at Marion Catholic High School before permanently landing back at Lehman in 1987 after learning the school would be adding AP chemistry to its course offerings. Thinking she would only be there for a couple of years, S. Ginny soon realized Lehman was home, stating no two years are ever the same. 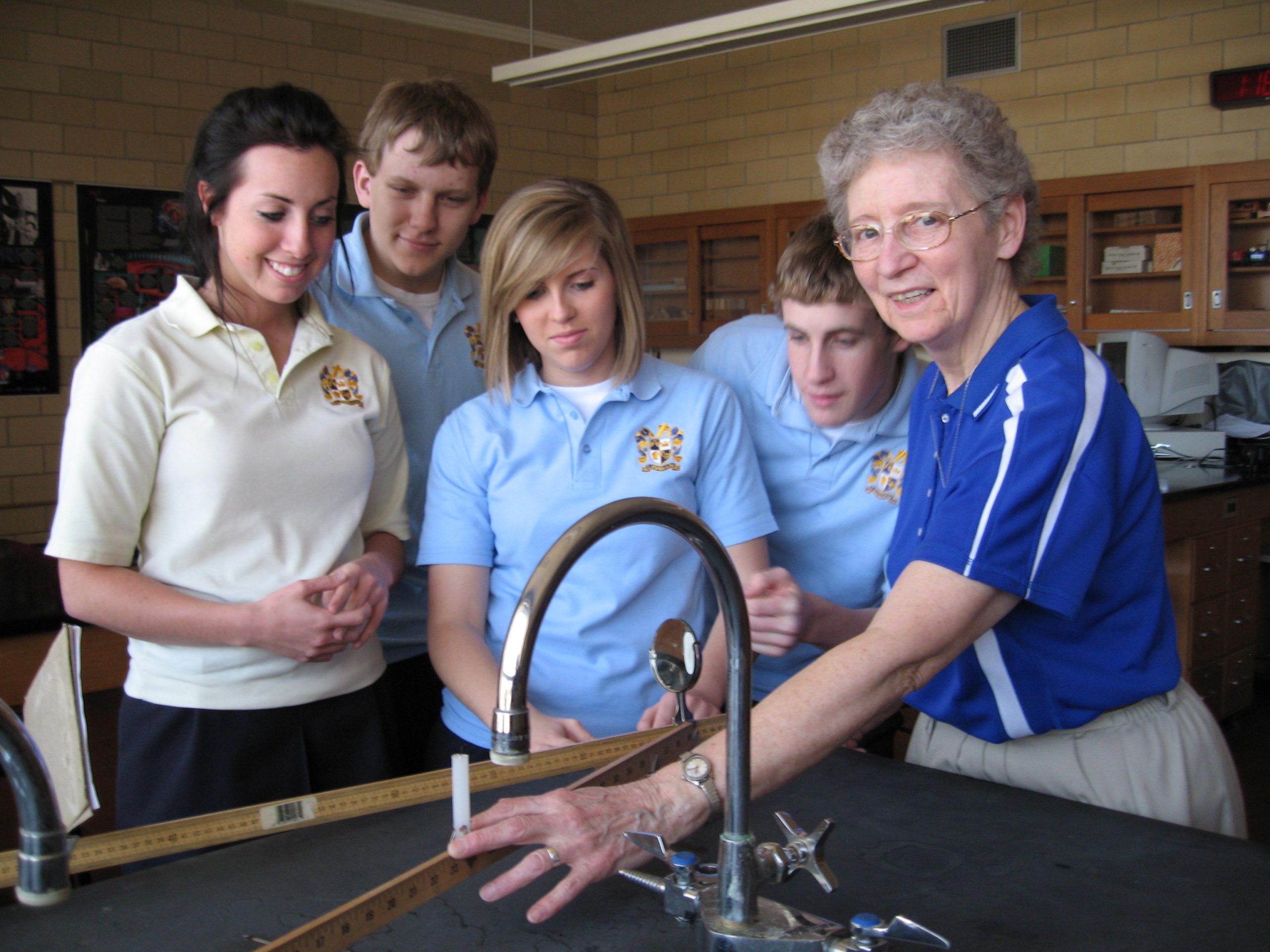 S. Ginny Scherer has ministered as a Chemistry and Physics teacher at Lehman Catholic High School in Sidney, Ohio, for more than 40 years.

Throughout the years S. Ginny has taught chemistry, math, physics and some electronics courses. She has focused on developing her students love for and understanding of science. She encourages participation and enjoys hearing each student’s opinions and perspectives. “I don’t try to answer their questions, we throw it to the floor and ask the class what they think; we figure it out together. They participate as much as I do,” she said.

In addition to teaching S. Ginny thoroughly enjoys involving herself in activities outside the classroom; this includes the annual science fair and Science Olympiad, a national competition with more than 7,800 middle school and high school teams from across the U.S. competing in various scientific events. She started the school’s girls athletics program with S. Dorothy William Englert and coached basketball and softball. She has also been the senior class advisor for many years and involved in the senior Kairos retreats where she has witnessed much spiritual growth.

“Working with teenagers is really a blessing,” says S. Ginny. “They are going through such an important time in their life. It’s wonderful to see them grow – spiritually, intellectually and socially – and leave as hopefully mature adults, ready to go out and face the world. Working with the students is the greatest joy.”

Despite what many would think, S. Ginny feels her students have not changed much over the years. “They have different obstacles but they have always had obstacles,” she explains. “They have a lot more thrown at them and the world they are in is a lot different. The challenges are different but they are the same good kids.”

As with any profession the field has changed through the years and S. Ginny says professional development has always been important to her. She is involved in state and national science teachers associations, as well as attends yearly conventions. She says these opportunities allow her to continue to learn and grow. She particularly benefitted from these learnings this past year after being called on to teach students remotely, setting up a spare bedroom in her home to Zoom students and attempt at-home experiments together. 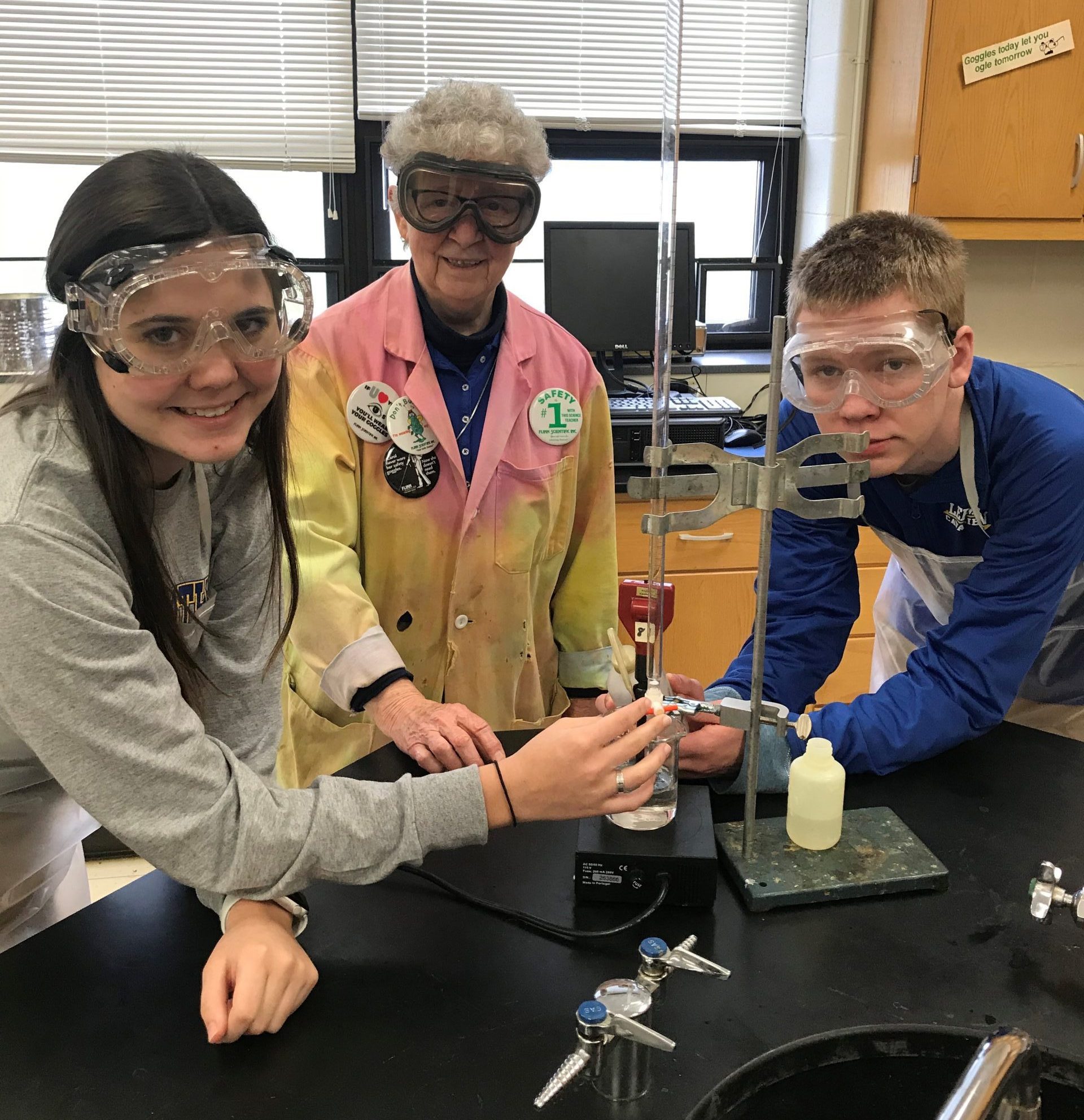 It was S. Ignatius Sanche’s chemistry class at the College of Mount St. Joseph that changed S. Ginny Scherer’s ministry direction and led her to teaching.

Drawing on the spirit of Sisters of Charity founder, Saint Elizabeth Seton, in her ministry, S. Ginny admires the strong, caring woman Elizabeth was to all she encountered. “I have been blessed with a lot of friends inside and outside of the Community, former students, parents, teachers, Sisters of Charity. Elizabeth gives me courage to be that kind of friend. How she treated her students, she cared about each one of them and what was happening to them, I try to carry that on.

“So many times you’ll notice that someone is struggling, whether it be with school or in their personal life. Oftentimes we do not know what happens in their lives before they arrive in the morning or when they leave in the afternoon. When I see that they are struggling in the subject matter, I offer for them to stop in and work on it. That one-on-one teaching is probably the best teaching. I enjoy that even more.”

Like her call to religious life, S. Ginny was meant to be a teacher. Her example and her devotion to the success and wellbeing of each and every student has long been admired and celebrated by her former students, parents and coworkers. Little did she know when she took that first Chemistry class with S. Ignatius in 1958 that her unanswered prayers would lead to 50-plus joyful years in the classroom.