Guardians of the Environment 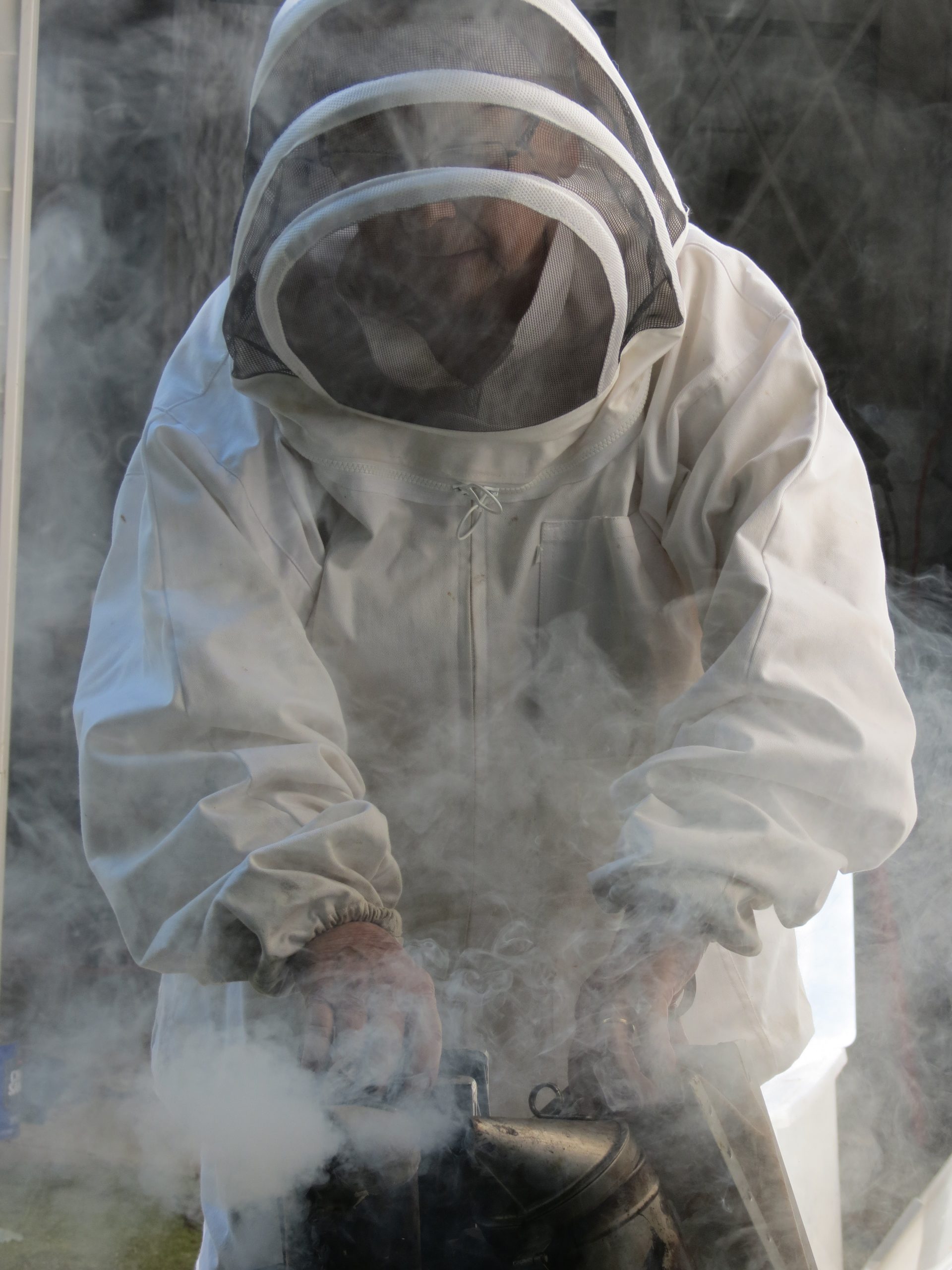 As we prepare to celebrate Earth Day on April 22, we remember the beekeeping ministry of S. Helen Therese Scasny, and the importance of bees to our environment.

One spring morning, eight years ago, S. Helen Therese Scasny made an announcement at breakfast.

“I’m going to become a beekeeper.”

We were incredulous. “That’s a lot of work, Helen.”

“I know but I met a man at Light of Hearts Villa [senior residential living services in Bedford, Ohio] who was telling me how wonderful it is to raise bees. And, I have read that bees are on the decline and this is catastrophic for the environment. I can do my part to help.”

And so she started. Ross Oriti, the Mr. Beekeeper she had met, began teaching S. Helen the rudiments of beekeeping. Ross was a certified beekeeper and so knowledgeable on beekeeping that The Ohio State University regularly consulted him and even sent students to learn what they could of his vast experience. Ross was retiring from the business of beekeeping since his advanced age and challenging health issues presented problems in keeping up with the project.

Ross donated his supplies and equipment to S. Helen and spent the summer training her on the skills required to set up and execute the industry of beekeeping. 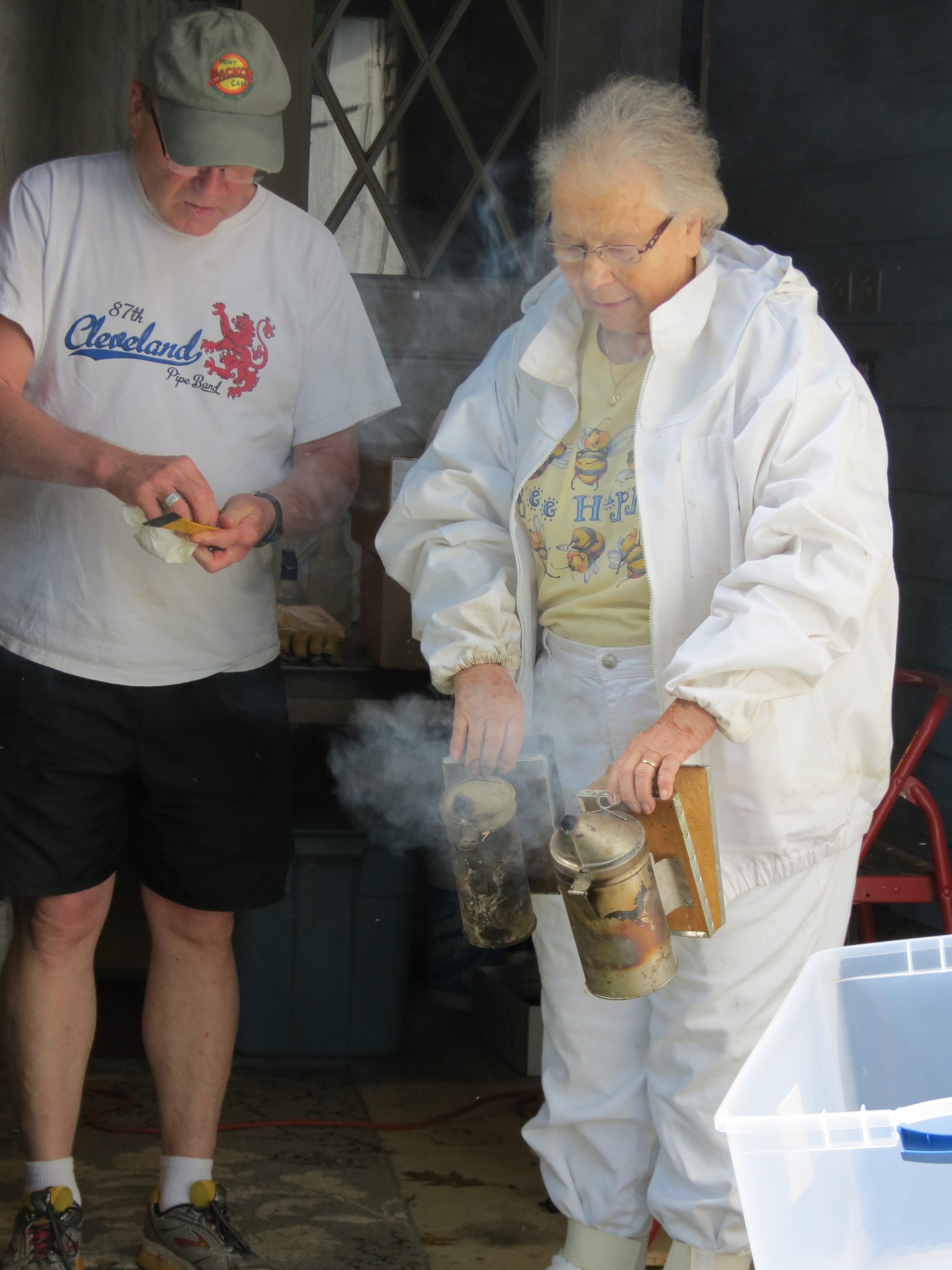 Jim Henley and S. Helen Therese Scasny preparing to get dressed to work with the bees. Photo courtesy of LouAnn Rossi.

A fellow wannabe beekeeper in town, Jim Hensley, learned of S. Helen’s initiative and the two joined efforts in helping with each other’s hives and honey production. Every warm spring and summer day, S. Helen and Jim donned their protective suits and worked on her four hives checking for production, providing water, taking note of any concerns they might have to resolve.

“Bees are industrious and clever,” said S. Helen, “they usually solve their own problems.” In bee literature a story is told that a lumber business caught fire and raged toward a nearby bee farm overtaking the beehives’ wooden exteriors. But the bees survived. They had insulated themselves with honey and fanned the interior with their wings preserving the infrastructure of the hives and the bees themselves. She will recount for you many of the stories of the bee hierarchy that governs each community, the sovereign rule of the queen, the guards at the gate, the drone and workers, all networked to create a profitable, peaceful community. Sometimes her narrative sounds like a true medieval tale.

S. Helen and Jim would harvest honey in early summer and late fall, at the beginning of floral blooms and the end when they begin to fade. Neighbors loved the easy access the bees had to their flower gardens increasing the beauty and health of the flowers. S. Helen urged neighbors not to use pesticides and it worked. Location was helpful as well; the hives were only 1,000 feet from Tinker’s Creek, a tributary to the Cuyahoga River, and adjacent to the Metro Park System with its bountiful fruit and wildflower plants.

Harvesting the honey is a major project. Once it is removed from the combs of the hives, it is placed in a large extractor to sift debris and impurities such as wax, pollen, propolis and even bee wings and legs! This process would take place in the barn where S. Helen and Jim filled jars with honey for eventual selling. In addition to the honey, S. Helen created wax items for sale and small gifts. People like small wax bars to rub on drawers for easy opening and small wax candles which burn slower than commercial ones. 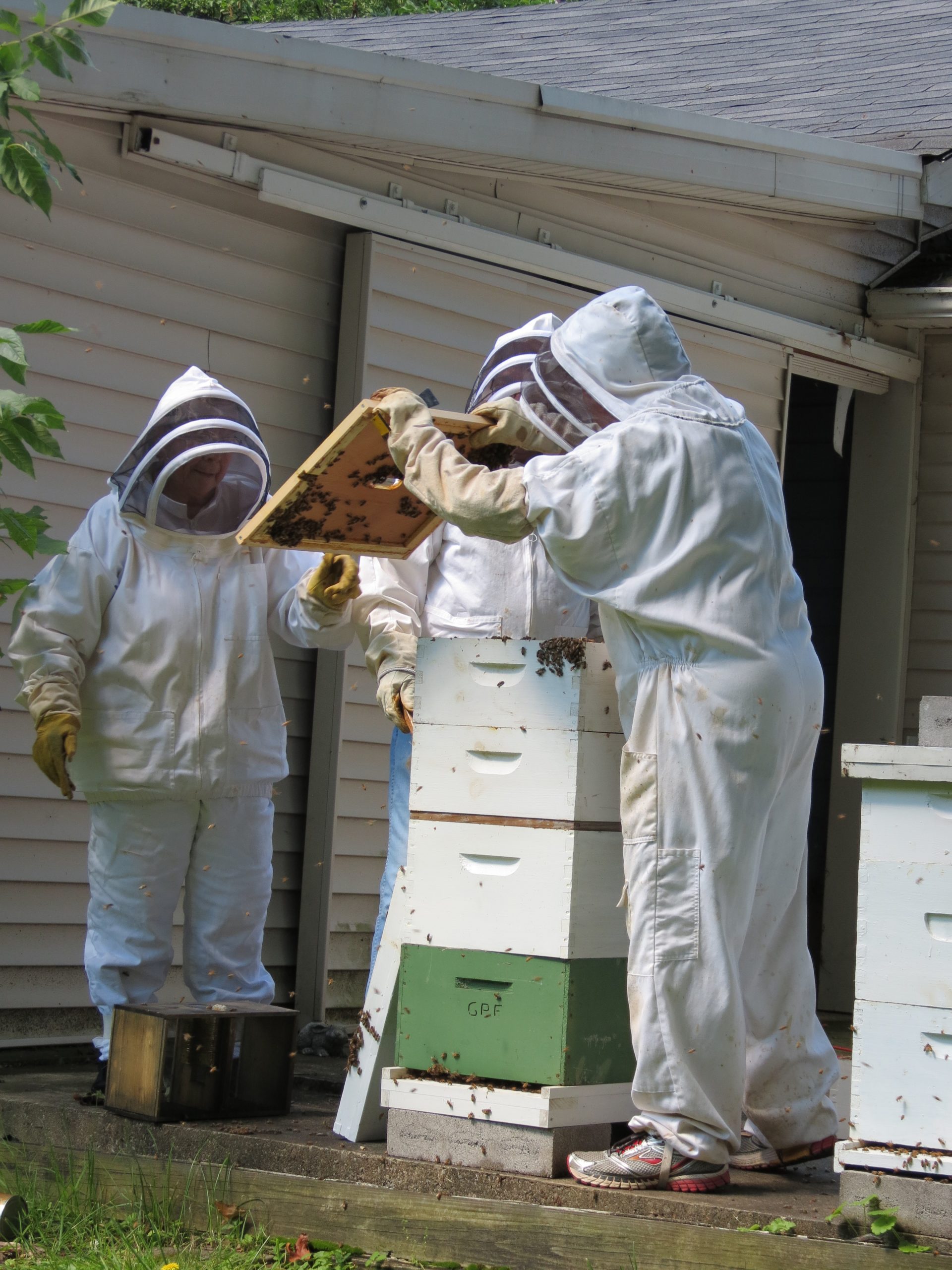 Sales from the honey took place at Light of Hearts Villa, or before COVID, at various venues where S. Helen was asked to speak on beekeeping. Proceeds went to the Villa for the Benevolent Fund which assists residents who have run out of money to continue their care. “I like the idea that no one is turned away for lack of funds,” says S. Helen. During an average year of sales honey brings in around $2,500.

The lives of bees are constant sources of intrigue for writers like Sue Monk Kidd and Laline Pull, to name only two. Dissertations have been written on the bee imagery so prolific in the poetry of Emily Dickinson. This past winter S. Helen lost all her hives and determined that now, at the age of 88, it might be time to retire from beekeeping. She has chosen to pass on all her equipment and knowledge to another beekeeper on Cleveland’s west side. Her message, however, remains quite simple: “The bees are among the guardians of the environment and I have loved learning from them. They are remarkable creatures of God and I love telling people that.” She will always be an advocate for bees and will share her knowledge with anyone willing to listen.