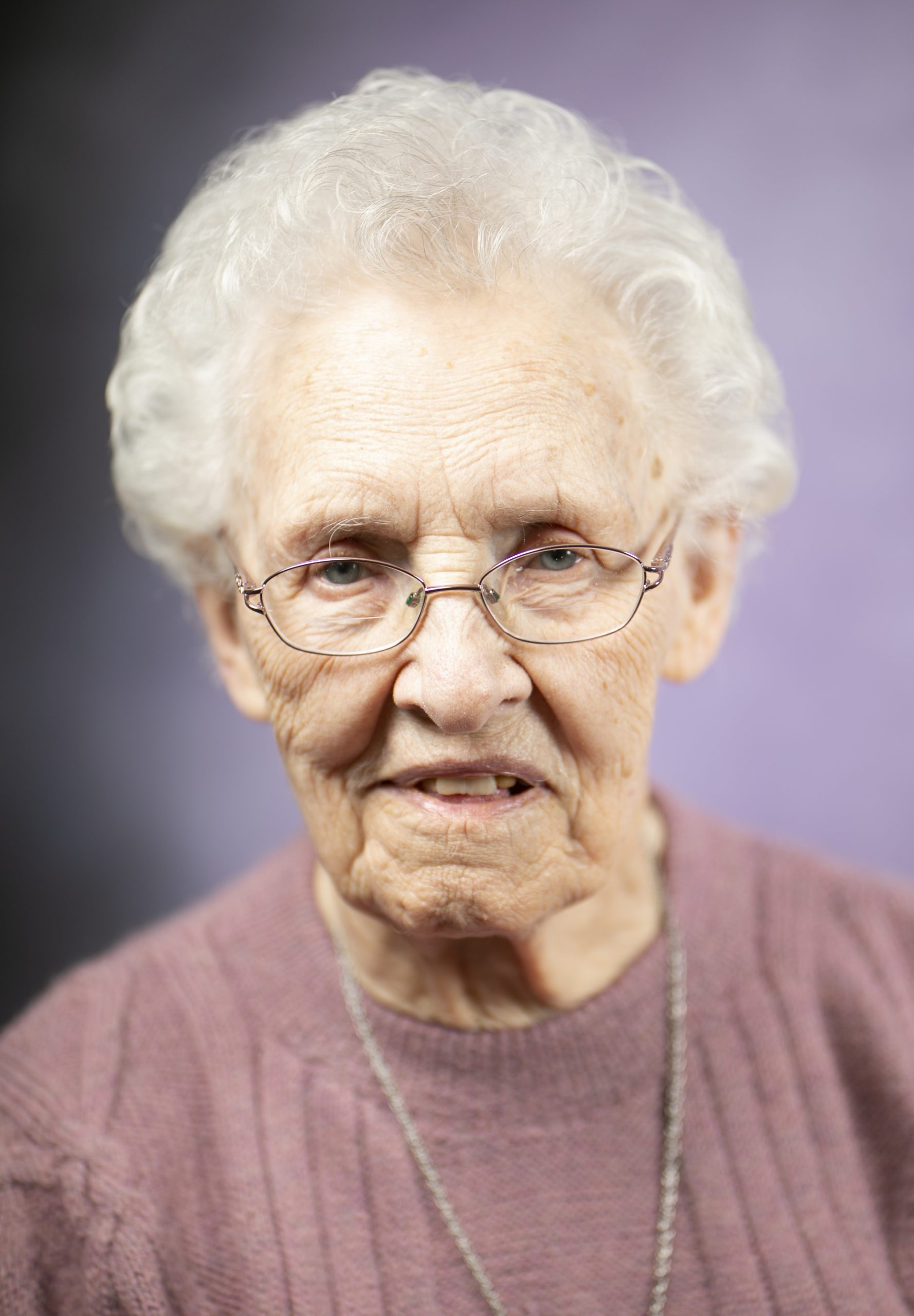 S. Florence Cremering died April 22, 2021 at the age of 97 in Mother Margaret Hall, the nursing facility for the Sisters of Charity. S. Florence was born Adele Elizabeth Cremering on Dec. 2, 1923 to Bernard and Florence (Terdoest) Cremering in Cincinnati, Ohio. She was one of six children, four girls and two boys. She was a Sister of Charity of Cincinnati for 76 years.

S. Florence grew up in Cincinnati, attending St. Mary, Hyde Park grade school and graduating from St. Mary High School in 1941. She worked at McAlpin’s in the business office after graduation and then took the civil service test to work in a government agency where they were able to prevent foreclosures by helping people refinance their loans. She entered the Sisters of Charity of Cincinnati on Sept. 8, 1944. Her older sister, S. Mary Jerome, had entered the Congregation six years earlier. She would say that she was very happy to respond to her own call she had heard so many years before, “I wanted to do whatever God wanted for me.” She was inspired by her fifth grade teacher, S. Mary Leander Steen, who shared a homemade book of special prayers with her interested students.

S. Florence’s 50 years of active ministry included 23 in the classroom (nine in elementary and 14 in high school), 13 in parish ministry and 14 in foreign/multi-language settings. In the classroom S. Florence taught at Holy Family, Cincinnati (1947-’54); St. Robert, Flushing, Michigan (1954-’56); St. Joseph, Dayton, Ohio (1956-’58); Marion Catholic, Marion, Ohio (1958-’64) and Trinidad Catholic, Trinidad, Colorado (1964-’70). She moved to a variety of parish ministry settings, beginning at St. Joseph, Trinidad, Colorado and then Trinidad Parish Center (1970-’78). While there she took a crash course in Spanish, since the Mass was now able to be offered in the language of the people. Sister Florence would say that this move gave direction to the rest of her life: being with the poor in rural and Hispanic communities. She volunteered to work in rural Georgia in 1978 as a pastoral assistant at Sacred Heart parish for four years before giving four years to a similar setting in rural Kentucky at Mother of Good Counsel, Hazard, Kentucky.

In 1988 S. Florence answered the call of the Sisters of Charity Community to serve in the foreign missions, specifically at San Ignacio in Ichuna, Peru; the time in the high Andes was a special gift. This experience led her to continue serving the needs of the Hispanic community with S. Ann Dorenbusch at San Juan Bautista parish, which later became Sagrada Familia, in Cleveland, Ohio (1990-’99). For the next three years S. Florence had the joy of being part of the Clinica Guadalupana community in El Paso, Texas, as a volunteer.

In her retirement S. Florence came to call Mount St. Joseph ‘home’ again. She enjoyed the blessings of volunteering, appreciating nature, loving the daily liturgies and being among her Sisters. She took up art, painting in watercolor, swimming and reading.

S. Florence, when asked to share something about life, responded with a quote from St. Elizabeth Ann Seton, “To enjoy we must love and to love we must sacrifice.” Sister Florence’s life is an example.

S. Tracy Kemme shared, “Before my first vows, Sister Florence Cremering, then 91, gifted me with her Sisters of Charity ring. Now, at age 97, she goes off to be with God.  I keep touching the ring on my finger, filled with unspeakable gratitude for Flo’s long life of service, her gentle witness to Christ’s love, and her tender, steadfast support for the newest SCs. I will miss her, but my heart rejoices to know she is with the God she loves so deeply.”