In May we celebrated the special heritage month for Asian Americans and Pacific Islanders. In doing so we are reminded of our own Asian American Sisters of Charity. China became the first Sister of Charity foreign mission when, in 1928, six Sisters arrived in Wuchang, a city about 750 miles up the Yangtze River from Shanghai. They opened a hospital and dispensary, cared for the aged and orphans, ran a school for young children and a training program for nurses. By the early 1930s young Chinese women began to join the Community and in 1934 a Novitiate was opened in China. The Sisters worked through the Japanese invasion and occupation during World War II and the Chinese civil war but left in 1949 in the wake of the Communist takeover.

S. Mary Barbara Philippart provides an introduction to these special women: “The Chinese Sisters came to the Mount to make their Novitiate, escaping Communist China. They left in a hurry, hardly having time to say goodbye to their families. I remember their beautiful attitude; I was privileged to work with them. My assignment was to teach them English while we cleaned and scrubbed during our Novitiate year in 1947. It was their courage that impressed me; their love of God that made them leave their country, their culture and their families. … These were the beginnings of many blessings.”

Following many dedicated years in ministry, caring for others and devoting their lives to service, the Sisters returned to the Motherhouse to enjoy their retirement. S. Cookie Crowley, who feels blessed “to have met our wonderful, warm Chinese American Sisters,” enjoyed spending time with the Sisters during these years at the Mount. She appreciated their company at meals, around the Motherhouse, and especially in the Craft Center where they all spent time using their creative talents to make incredible items to be sold in the Gift Shop.

In the following article, S. Cookie and many other Sisters reflect on their special relationships with Sisters Rose Cheng, Teresa Mary Chiou, Lucia Mao, Joseph Ignatius Owyang, Martha Seton Tsai, Mary Pauline Tsai and Columba Yuan. The article represents only a narrow sampling of our blessed heritage as Sisters of Charity of Cincinnati. 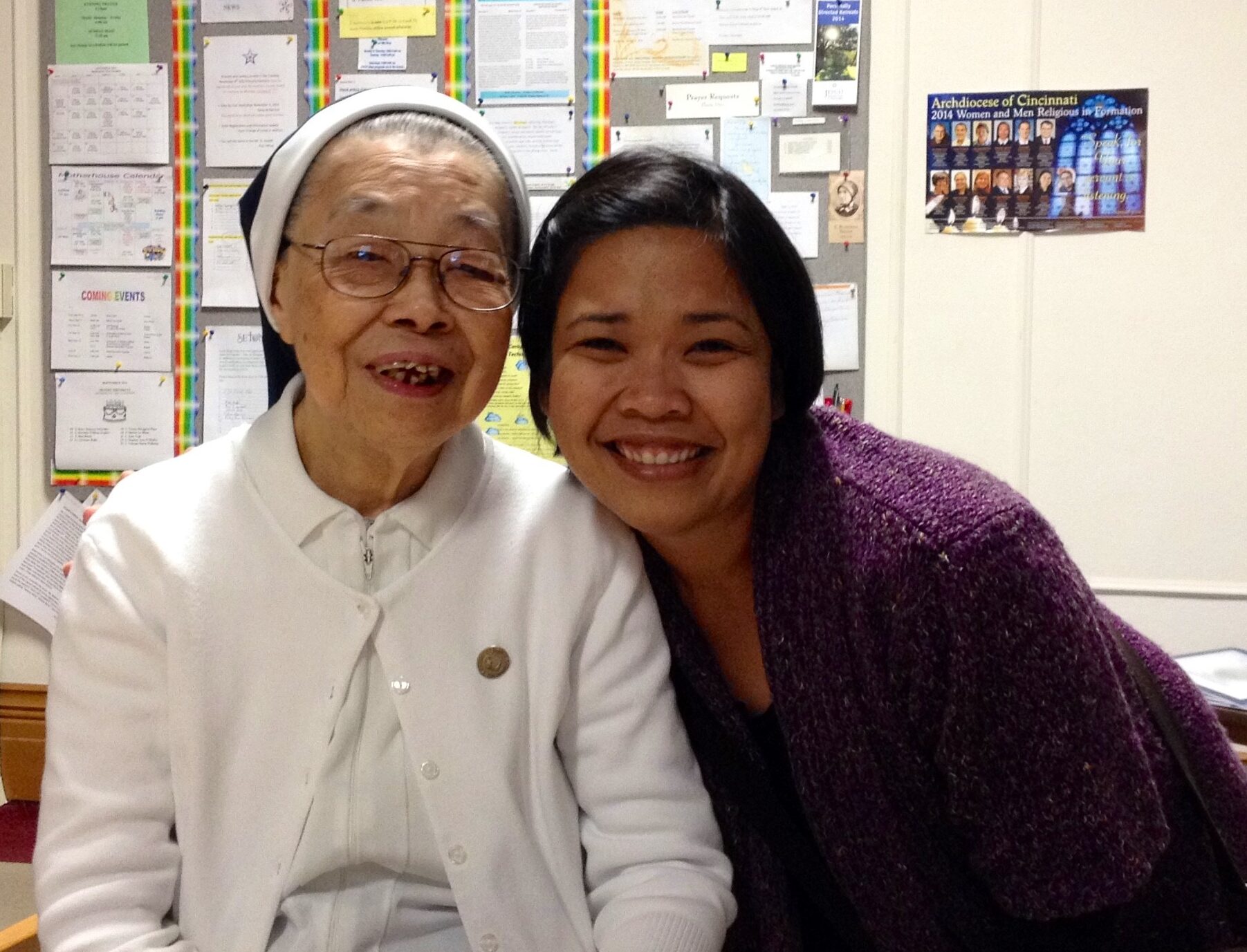 (From left) Sisters Rose Cheng and Romina Sapinoso have developed a close friendship through the years.

S. Rose Cheng entered the Sisters of Charity in Wuchang, China in 1946. She ministered in food service when first coming to the Motherhouse in 1948 and then served as a nurse aide in Mother Margaret Hall, the Motherhouse, and at St. Joseph Hospital in Albuquerque, New Mexico before volunteering in the SC missions in Peru; this was followed by three years with Catholic Relief Services in Vietnam. She offered rehabilitative foot care to her Sisters at the Motherhouse, employing techniques of Eastern medicine before retiring in 1994. Immigrants on the southern border benefitted from her restorative health care methods in 1999 while living with our Sisters there. S. Rose currently lives in Mother Margaret Hall and remains grateful for the many blessings in her life.

S. Jean Miller appreciates S. Rose’s gifts. “She helped me believe and trust Eastern medical strategy,” says S. Jean. “I also learned the necessity of asking about and celebrating their culture while teaching them ours.”

Adds S. Romina Sapinoso, “S. Rose Cheng is one of the most grounded and beautiful SCs I know. Her humility about her ministries that took her to Vietnam, Peru and the Mexican border assisting the Sisters on mission wherever she was mutes her real impact on spreading the charism of Charity beyond Wuhan where she first met the Sisters. Even in her retirement age, she has ministered to many, including me. Her simplicity and full embrace of the increasing loss of her sight and hearing models her complete trust and love of God. Through her life, she is showing me that I am meant to be here and assures me that though my culture and where I come from is different, love finds a way. I am so blessed to be gifted with her mission cross which I received from her when I made vows. She is truly intercultural and a true border-crosser for Charity!” 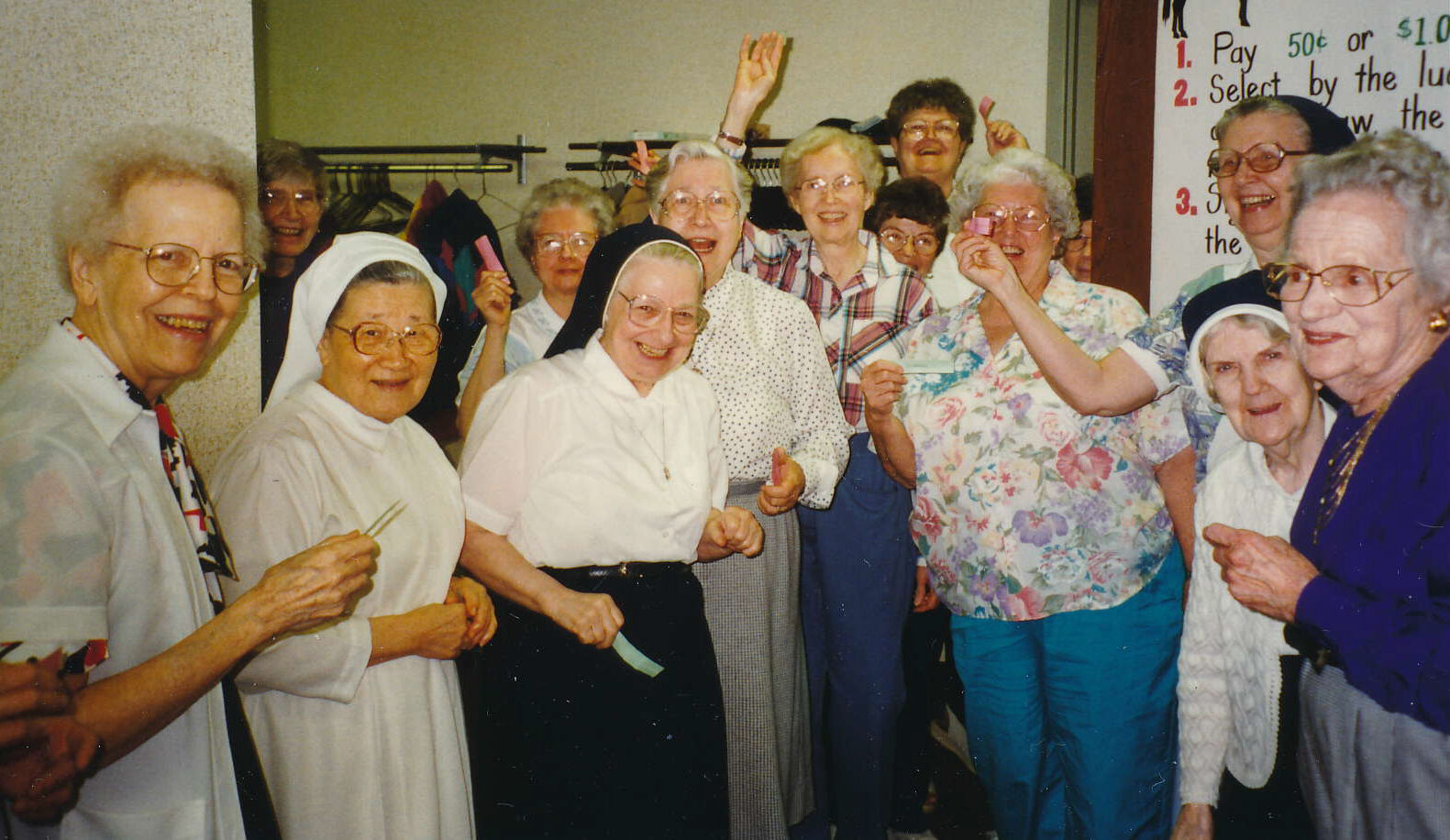 S. Teresa Mary Chiou entered the Community in September 1939. She became a Licensed Practical Nurse, serving at St. Joseph Home (1964-’89) as well as Mother Margaret Hall and in Santa Fe, New Mexico and Denver, Colorado. She was also gifted with seamstress skills and had an eye for crafts, bringing joy to many. She retired to the Motherhouse in 1992, serving in the Craft Center. S. Teresa Mary died in January 2013.

S. Cookie Crowley remembers, “She was the sweetest woman God ever put on this earth. Being extremely creative she could put a new bed covering together like no other; they were beautiful. When I would visit S. Teresa in Mother Margaret Hall she had this beautiful cover on her bed of very colorful butterflies and flowers – gorgeous! I would always say, ‘Teresa, I love that cover, all those beautiful shamrocks!’ She would return with, ‘Cookie, honey, those are butterflies and flowers.’ This is a warm, fond memory!”

S. Marianne Van Vurst appreciated S. Teresa’s dedication. “S. Teresa Mary came to St. Joseph Home in 1964 as an LPN nurse and retired 25 years later in 1989. However, her dedication to those we served did not end. Sister continued her ministry as a volunteer until 1992 when she retired to the Motherhouse. She was loved by the staff and she always gave her love back. She never sought the limelight. Through her actions and her prayer life, the love she had for the Lord and those she took care of was very evident. She was quiet, always had a sweet smile and a cute little laugh. We feel confident that S. Teresa Mary is now watching over the staff and residents of St. Joseph Home from her heavenly home.” 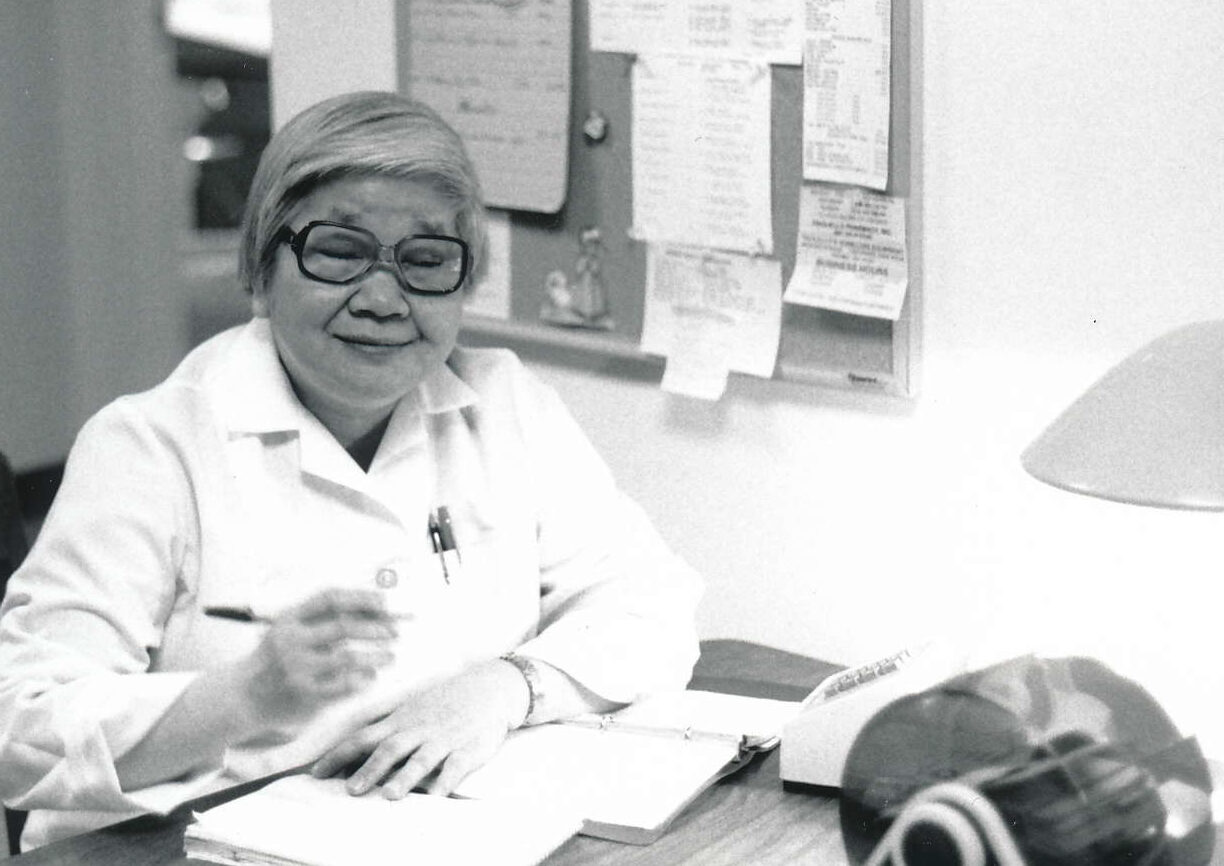 S. Lucia Mao was a registered nurse, serving at hospitals in Ohio, Colorado and Michigan.

S. Lucia Mao entered the Sisters of Charity in September 1948 and was trained as a registered nurse at Good Samaritan Hospital in Dayton, Ohio. She ministered at St. Joseph Home as well as in Sisters of Charity hospitals in Trinidad, Pueblo and Colorado Springs in Colorado and Mount Clemens, Michigan until 1997 when she retired and served as the assistant director of the Motherhouse clinic. S. Lucia lost her birth family at the hands of the Communists, but would say she gained the families of others through God’s blessings. She died in March 2008.

Of S. Lucia S. Cookie recalls, “[She] was ready for a party, anytime, anywhere; the occasion did not matter. Once when she was very ill and leaving the Motherhouse on a stretcher she took my hand and said, ‘Cookie, no parties until I get back.’ I answered, ‘We will party because you are back!’ She laughed, I cried.”

S. Terry Thorman came to know S. Lucia from her ministry in Mother Margaret Hall, “She was extroverted and had a great sense of humor. Yet her life contained the story of childhood trauma caused by Communist invasion and having to leave her people, country and culture without a chance to return for at least a generation, perhaps a lifetime. What was different about her, in my experience, was that she was able to share her trauma with others more freely than most. Many who knew her only casually knew details of deaths she had witnessed. She wanted to tell her story. Yet, most of the time, she entered into the present moments of her multicultural life. She knew how to have fun!” 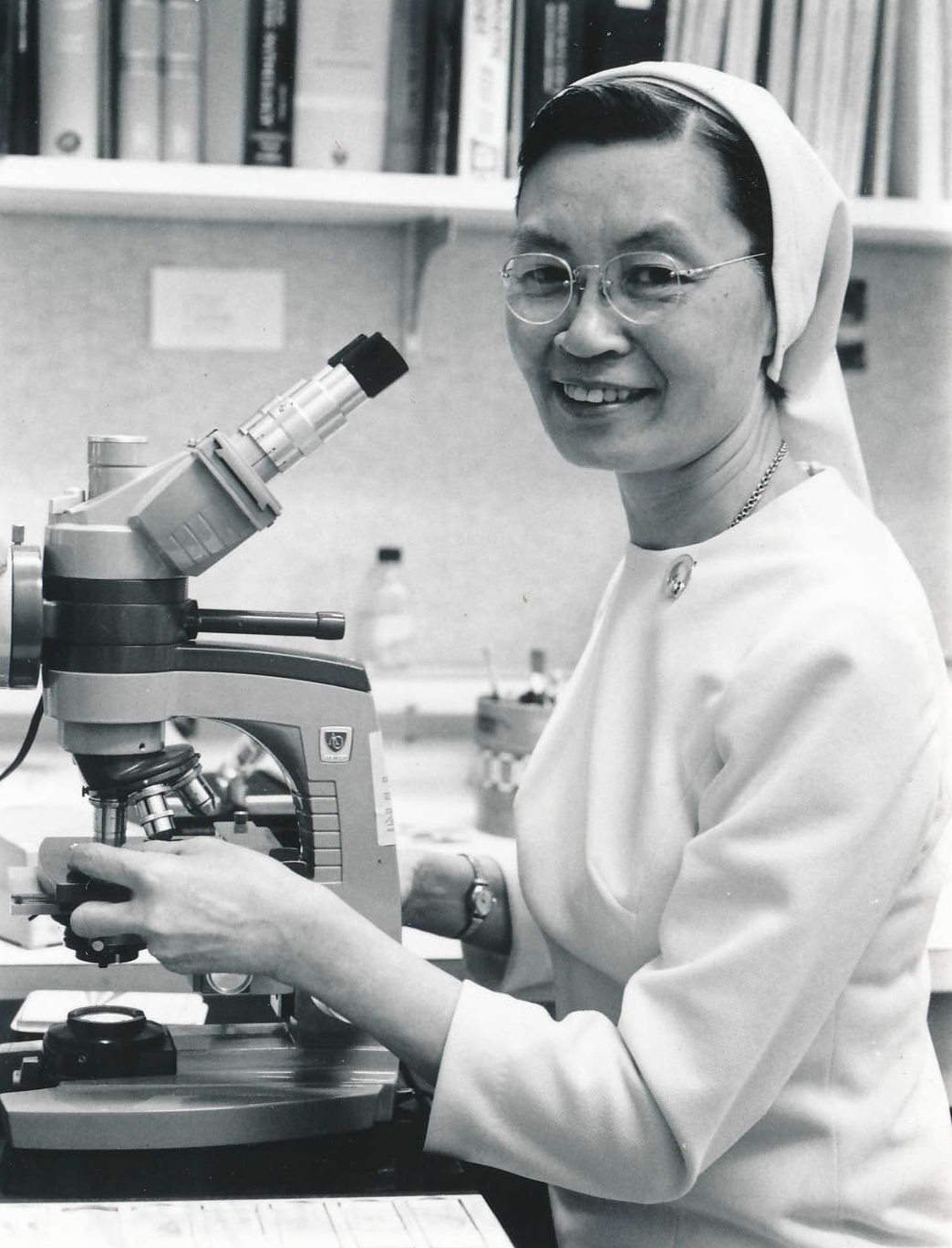 S. Joseph Ignatius Owyang was a pathologist at Good Samaritan Hospital in Cincinnati from 1950-’82.

S. Joseph Ignatius Owyang entered the Sisters of Charity in January 1949, the year that all religious communities were expelled from China. She had already completed her medical degree at St. John University, Shanghai in 1946 and met the Sisters of Charity in Wuchang. She ministered as a pathologist, uncovering causes of diseases, at Good Samaritan Hospital in Cincinnati from 1950-’82. She received Clinical Pastoral Education and worked at St. Joseph Hospital in Albuquerque, New Mexico from 1983-’90 before her retirement to the Motherhouse. S. Joseph Ignatius died in June 1994.

“As a pathologist S. Joseph Ignatius Owyang seemed to be on call all the time,” said S. Lynn Heper, who lived with four of the Chinese Sisters at Good Samaritan Hospital. “Weekends, holidays, middle of the night she never complained. The people in the lab loved her for her quiet ways and her keen mind. She also played the organ. She would practice late in the evening because she was needed down in the lab most other times.” 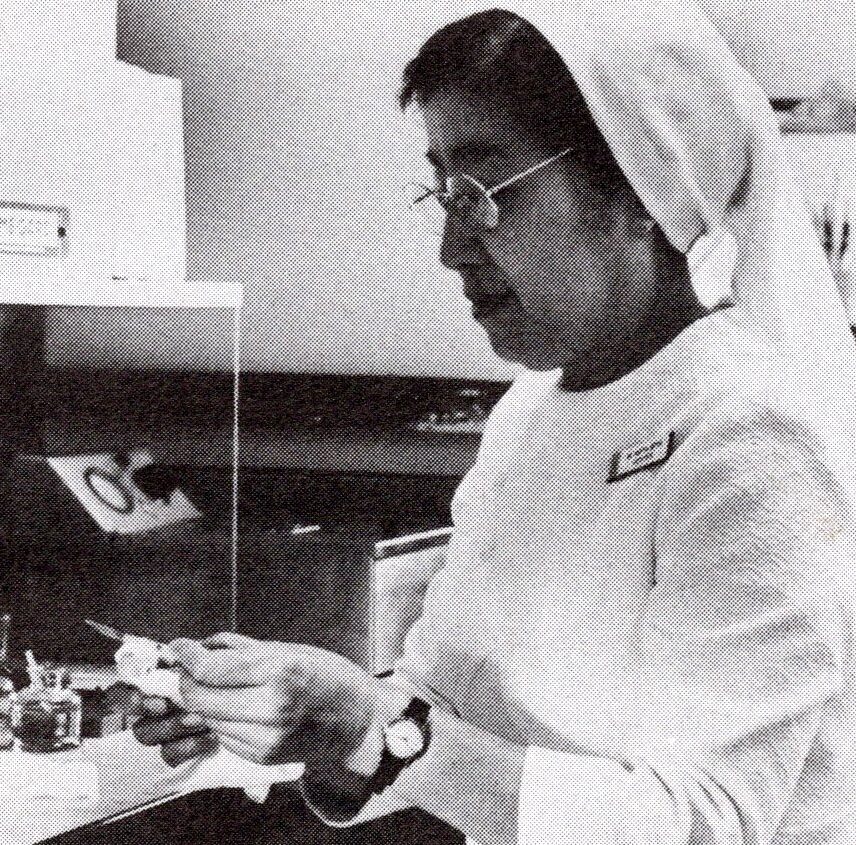 S. Martha Seton Tsai gave a majority of her years of service as a histology technician at Good Samaritan Hospital in Cincinnati.

S. Martha Seton Tsai came to the Sisters of Charity in September 1939, as one of three family members entering religious life. She first ministered as a seamstress at Good Samaritan Hospital in Dayton before giving a majority of her years of service as a histology technician at Good Samaritan Hospital, Cincinnati (1969-’82). She retired to the Motherhouse, serving as a volunteer in Hospitality in 1982. She died in May 2012.

S. Lynn Heper recalls that S. Martha Seton could always be counted on for her quality work in the laundry. “She was a very quiet, spiritual person, a joy to live with,” she said.

S. Mary Pauline Tsai entered the Sisters of Charity in September 1949, shortly before all religious communities were asked to leave China by the Communist government. She went to Good Samaritan Hospital, Dayton, Ohio to be trained as a registered nurse, which she completed in 1958. S. Mary Pauline served as a nurse at St. Mary-Corwin Hospital in Pueblo, Colorado for 11 years, as well as Good Samaritan, Cincinnati, St. Joseph Home, and in Mother Margaret hall, nursing her own Sisters for 12 years before retiring as the lead crafter in the Motherhouse Craft Center in 1993. She died in September 2020.

Says S. Lynn Heper, “S. Mary Pauline Tsai was a tremendous nurse who worked on the surgical floor and gave care with her gentle hands and her warm heart. She always had a smile and filled in so often at the last minute when we were shorthanded.”

S. Columba Yuan entered the Community in September 1948 and served as a Licensed Practical Nurse in the health care field, giving 25 years to Good Samaritan Hospital, Cincinnati (1959-’84). She retired to the Motherhouse from Good Samaritan in 1999 where she was a Sister visitor and Communion distributor. S. Columba died in June 2002. 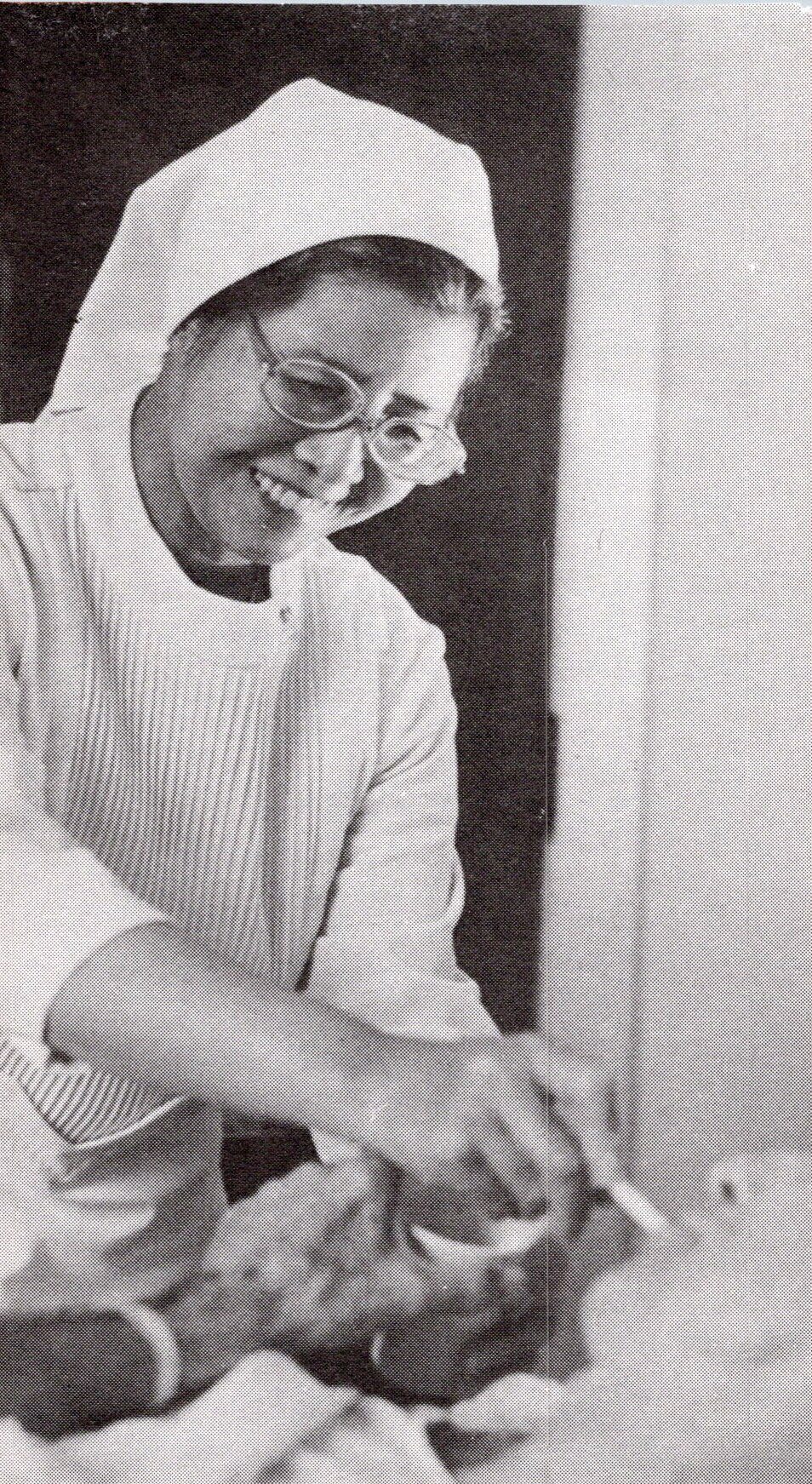 S. Columba Yuan served as a Licensed Practical Nurse in the health care field for more than 30 years.

S. Lynn Heper remembers, “S. Columba was truly loved by the patients she cared for at the bedside. Nothing was ever too much or too big for her to handle. She gave care with loving hands, a loving heart, and always with a smile.”