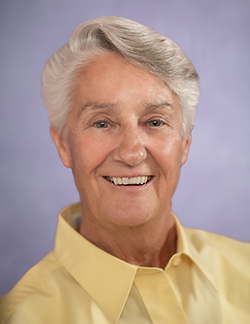 “I love belonging to the Sisters of Charity Community and if I had to do it all over again, I would do exactly the same thing,” said Sister of Charity of Cincinnati Jacqueline Leech, who celebrates 60 years as a religious woman in 2021.

Sister Jackie was born in Pittsburgh, Pennsylvania, and moved to Denver, Colorado, when her father was transferred there in 1950. She attended Blessed Sacrament Grade School and graduated from Cathedral High School in 1961. That same year she entered the Sisters of Charity.

In 1965, Sister Jackie received a bachelor’s degree in English from the College of Mount St. Joseph in Cincinnati, Ohio. She received her master’s degree in theology in 1977 from St. Louis University in St. Louis, Missouri.

In 1966, Sister Jackie began her ministry as a secondary teacher in Pueblo, Colorado. She also taught in the dioceses of Santa Fe, New Mexico, and Denver, Colorado. From 1976-’83, Sister was the associate vocation director and later the director of vocation for the Archdiocese of Denver.

“I enjoyed working with the seminarians and priests and developed good relationships with them,” Sister Jackie said.

As she reflects on her 60 years as a Sister of Charity, Sister Jackie says that the best thing about Community life is, “In belonging to a Community and pooling our resources (‘woman power’ and finances) we are able to help others much more than independently. The support and concern I have received when I have been sick and have experienced deaths in my family have meant so much to me. The fact that I belong to a larger group gives me the desire to contribute to the building of our community, and to be a responsible, loving member.”

Sister Jackie participates in a variety of sports including biking, skiing, snowshoeing and hiking. She also enjoys art, classical music and playing the piano. “I’ve always wanted to learn to play the piano, so I am teaching myself,” she said. In retirement she volunteers at Earthlinks, with the St. Anthony Foundation Board as well as St. Dominic’s parish and the Denver Police Department.