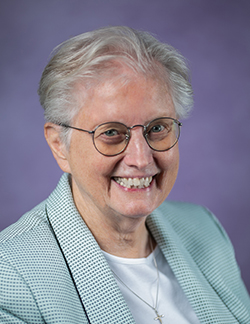 “I entered religious life because, after prayer and reflection, I felt that is what God was asking of me,” Sister Judith Metz said on the occasion of her 60th anniversary as a Sister of Charity of Cincinnati.

A native of Cincinnati, Ohio, Sister Judith attended St. Teresa of Avila Grade School and later Seton High School, where she graduated in 1961. “I was taught by the Sisters of Charity at Seton High School and was attracted by their spirit of friendliness and dedication,” she reflected.

Sister began her years of ministry teaching social studies at her alma mater, Seton High School, from 1966-’79. There she also served as director of student activities from 1973-’79. In 1980, Sister served as archivist for the Research and Records Project for the Sisters of Charity Treasurer’s Office, and from 1981-’91, Sister Judith also ministered as the Congregational Resource person. This position included work with the Office of Faith and Justice, Treasurer’s Office, Archives, Life Development, Communications and other special projects.

“I also love to do historical research and writing,” Sister said. “I have been challenged and greatly satisfied by my work in this area.”

From 1993-’96 Sister Judith was a self-employed historical researcher/writer, a passion that continues today. Among the countless books and articles she has published are: “Elizabeth Bayley Seton, Collected Writings,” Volumes I, II and III, which she co-edited with Sister Regina Bechtle, SC; “A retreat with Elizabeth Seton: Meeting our Grace”; “Women of Faith and Service: The Sisters of Charity of Cincinnati”; and “Sister Margaret Cecelia George: A Biography,” which she co-wrote with Virginia Wiltse.

After serving as archivist and historian for the Sisters of Charity from 1995-2016, she retired as the archivist, but continues as the community historian. She also serves on the board of Seton High School, works on several projects of the Sisters of Charity Federation, and regularly presents programs for the Office of Mission and Ministry of Mount St. Joseph University. In her leisure time she enjoys reading, traveling, and walking.

As she looks to the future, Sister Judith says, “I hope to continue in activities that build on our appreciation of the history, charism and mission of the Gospel, of St. Elizabeth Seton and of the Sisters of Charity.  I hope the Congregation is able to carry out the mission of the charism of charity for many years to come.”