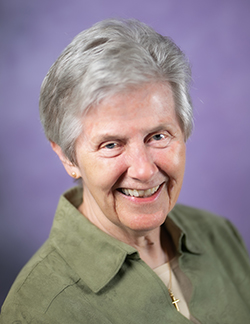 Sister Karen Hawver, a member of the Sisters of Charity of Cincinnati, is celebrating 60 years of service this year. Sister Karen grew up in Springfield, Ohio, in a happy, Catholic family of six. In addition to her parents, Frances and Carl, she had three siblings: Donna, Leah and Carl. Carl is a Franciscan priest stationed in Cincinnati. All four children attended St. Raphael Elementary School and graduated from Catholic Central High School.

Sister Karen received the Bachelor of Education from the College of Mount St. Joseph in Cincinnati, Ohio, in 1969, and a master’s degree in guidance and counseling from De Paul University in Chicago, Illinois, in 1976. She has spent 49 of her 60 years as a Sister in the field of elementary education.

Sister began her teaching ministry in 1965 as a primary teacher at St. Luke in Detroit, Michigan. One year later she moved to Chicago where she served for three years as a fourth and fifth grade teacher at St. Sebastian. She then moved for one year to Port Huron, Michigan, where she taught fourth and fifth grade, then to Guardian Angels School in Detroit as a junior high teacher, guidance counselor and assistant principal until 1979.

In August of 1979, Sister Karen began her 32 years of service as a principal, starting with 11 years at St. Dennis in Royal Oak, Michigan. In 1991, she moved to Holy Family Regional School in Rochester, Michigan, where she remained for 20 years. During those years she taught music to the school children and classes to parents on child behavior. The parent classes, entitled Understanding Yourself and Your Child, continued for more than 25 years at locations all over Michigan, Illinois and Ohio.

Also at Holy Family, Sister Karen was part of the planning committee to open a second campus of the school in 2001. The expansion was sponsored by the five parishes, pastors, and families who supported the school. “My most thrilling year as a principal was doubling our school enrollment in one year with the opening of our new campus for grades four through eight,” Sister remarked. “Families who had been waiting for years to enroll in our school were finally able to experience Catholic education.”

In 2011, Sister Karen left Holy Family to accept a position as assistant superintendent for Catholic schools in the Archdiocese of Detroit. She retired from formal education in 2014 after many happy years of working with children.

During her retirement, Sister Karen has kept busy singing for weddings, funerals and various other occasions for her family and those who request it. Her love of children, parents, and teachers has provided her most satisfying experiences. “My life is truly a blessed one,” she says. “Working with children, parents and teachers has given me a most fulfilled life. I thank God, my family and the Sisters of Charity for all of it.”