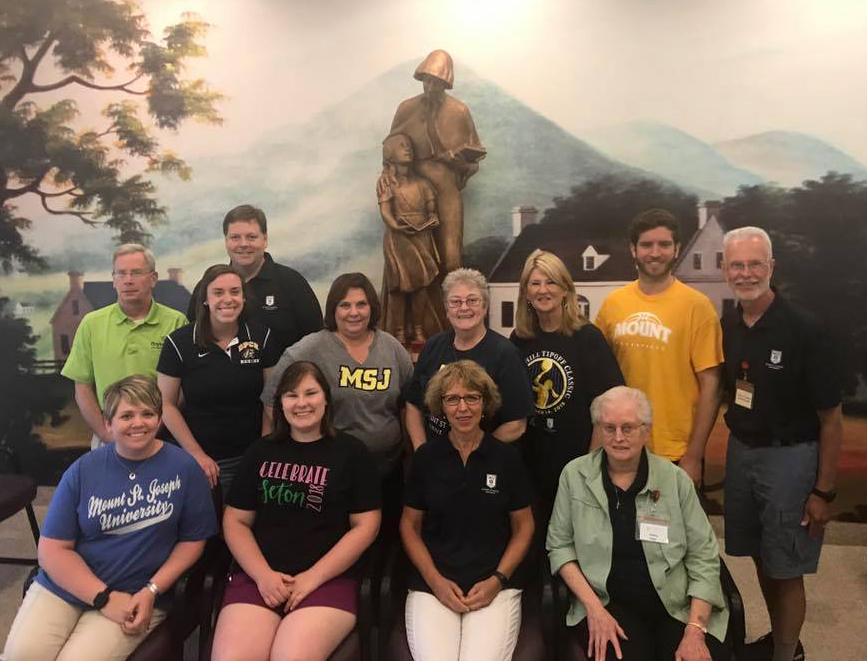 A scrappy ball player in high school, S. Karen Elliott, C.PP.S., director of Mission Integration at Mount St. Joseph University, approaches every challenge the same way she played softball: sliding toward the base, head first! She gives her all. Everything. Organizing a prayer group for athletes, creating a worship service for an event, counseling a struggling student, walking with a questioning faculty member, Elliott is constantly making the effort to help others find God in their lives and score some coveted points in happiness.

Born and raised in Dayton, Ohio, Elliott joined the Sisters of the Precious Blood in Dayton after high school. She was accepted into the Novitiate in 1980 and participated in an intercommunity program in which novices shared classes and recreational activities with several communities. This gave her an introduction to the Sisters of Charity with whom she would later work. But years earlier she had taken note of her father’s respect for the Sisters of Charity who ministered at Good Samaritan Hospital in Dayton when his twin sons were born prematurely.

“Together the babies weighed 5 pounds and were not given much of a chance to live,” she said. “But, S. Myra James Bradley, administrator of the hospital, prayed with my parents in the chapel during those anxious days and she even baptized one of the babies and administered confirmation.” Elliott remembers her father always recalling the kind pastoral effort S. Myra James made on behalf of the newborn Elliott boys who survived the trauma. The impression of this memory of the Sisters of Charity was not lost on Elliott.

After earning a bachelor’s degree in education from Wright State University in Dayton, Elliott began her teaching career at Lakota High School in West Chester, Ohio followed by two elementary schools and finally St. Michael’s School in Findlay, Ohio, which deepened her connection to the Sisters of Charity who administered and staffed the school.

Later, Elliott became youth minister at St. Michael’s and began working on her master’s degree in theology at St. Michael’s University in Vermont. While serving in Findlay, Elliott founded Hope House for homeless women which just celebrated 30 years of existence in the community. “I loved working with the Sisters in Findlay,” Elliott said, “their charism of charity had rubbed off on me and I was comfortable working with them.”

Elliott accompanied S. Barbara Davis to Toledo accepting a position as campus minister at Mercy College of Northwest Ohio where S. Barbara was an administrator. She felt strongly the call to continue her education in theology and scripture and began work on a Doctor of Ministry degree from Barry University in Miami, Florida, completing it in 2004. Elliott became an Associate in Mission with the Sisters of Charity in 2013 following the Vatican investigation of American Sisters. “I was invited to join an SC group addressing the investigation and it convinced me that I had to be part of the mission of St. Elizabeth Ann Seton. She stood up to the clerics of her time when she made decisions of where and how to serve in education and health care. She taught Black children even though it was against the law to do so!” 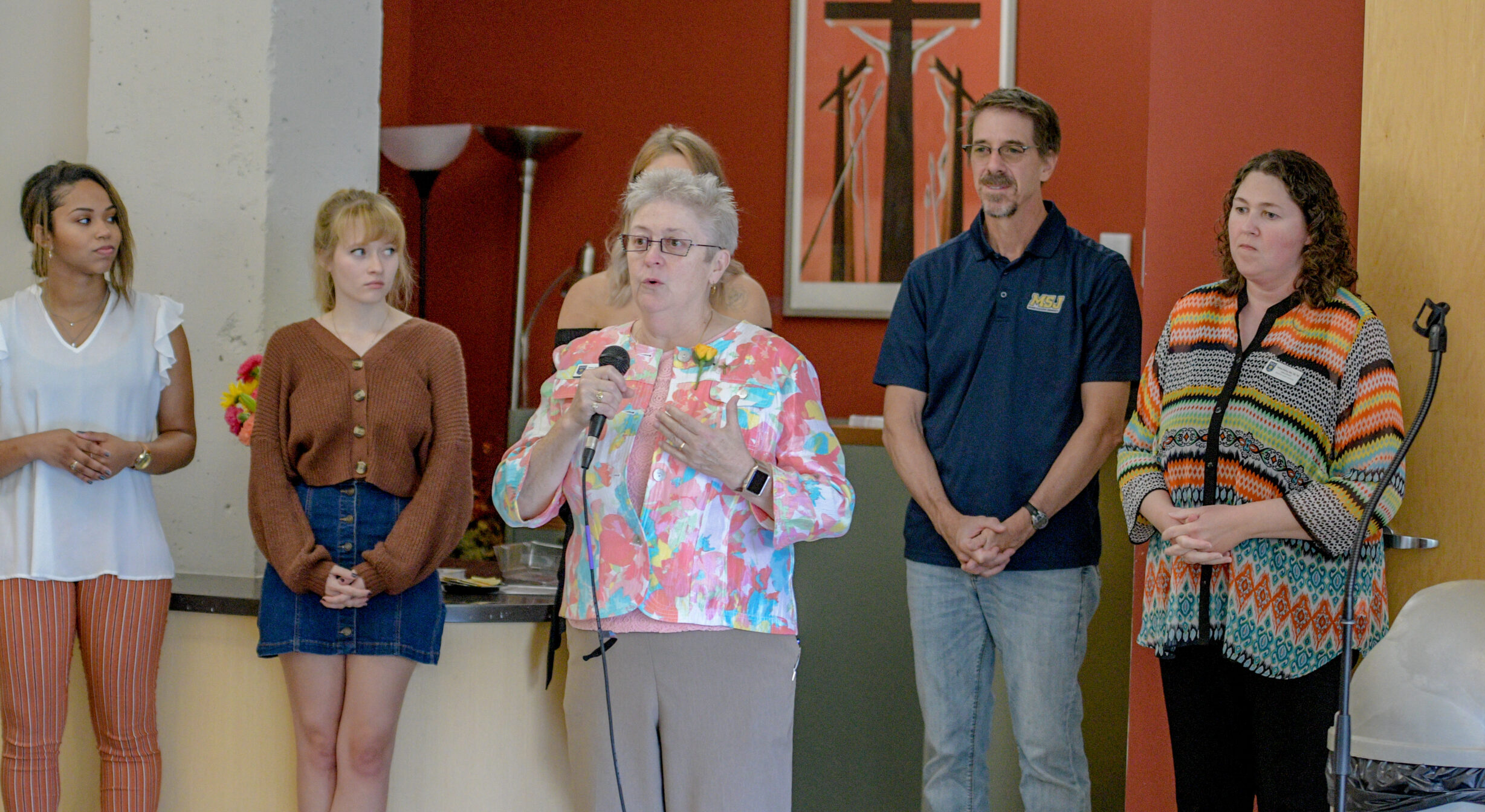 S. Karen Elliott, C.PP.S. (front), SC Associate and Sister of the Precious Blood, has served as the director of Mission Integration at Mount St. Joseph University since 2017.

Elliott is enthusiastic about relating the charism of the community to the university where she has worked since 2017. She guides students at Mount Saint Joseph University in the Heritage Mission Walk where individuals dress and imitate certain Sisters who are the founding members of the congregation of the Sisters of Charity and related to the university. “They walk the Motherhouse campus and fan out inside to learn about all the historical women who brought this complex and the university campus into existence,” she says proudly. She gives part of the general orientation program for students and faculty and is a presenter at the Physician Assistants Orientation Program and the White Coat Ceremonies in the Health Professional Ceremonies relating everything to the charism of Elizabeth Ann Seton. She has made more than one pilgrimage to Emmitsburg, Maryland, where Elizabeth Ann Seton started her community and her first school. 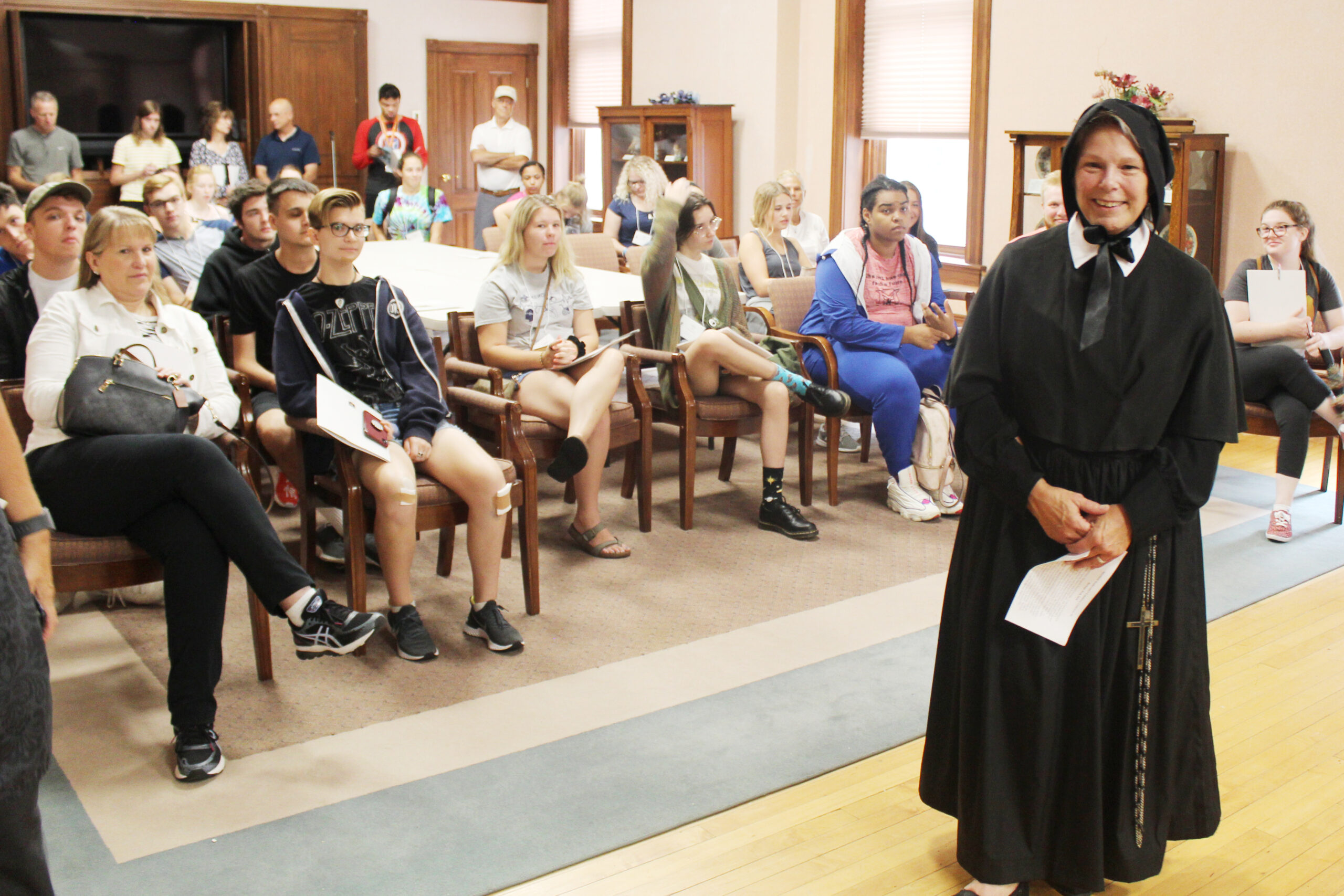 S. Karen Elliott guides students at Mount Saint Joseph University in the Heritage Mission Walk where individuals dress and imitate certain Sisters who are the founding members of the congregation and related to the university.

“I just love the writings of Elizabeth Seton,” Elliott says enthusiastically. “I love the simplicity, the focus on the ‘now.’ I read her frequently. One of my favorite quotes is, ‘Do your best as you always have, and leave the rest to God.’ So simple and yet so meaningful.” Soon after she was hired, Elliott joined the Charity Learning Committee of the university. “I love this group of 30 very thoughtful people,” she says. “We have discussions and prayer together. We share in selected readings—all in an effort to grow more deeply into the mission of the university.”

Every day is different for S. Karen Elliott. She may start with meeting students planning for an event, and then addressing faculty asking for information on something relative to theology. Later, there’s committee work and then listening to students trying to understand their faith in the context of some concern or issue. Evenings are seldom free because that’s when the athletes gather for faith sharing or an event takes place that is contextualized in liturgy or prayer. Through it all, Elizabeth Ann Seton remains the guide and inspiration for all that S. Karen will face saying to her, “Do your best, as you have always done, and leave the rest to God.”