Excellence in Care: The Sisters of Charity legacy as nurse educators

In 1896 Mother Sebastian Shea (left) started the school of nursing at Good Samaritan Hospital in Cincinnati.

From their early years the American Sisters of Charity were involved in nursing education. Elizabeth Seton dreamed of opening a hospital at St. Joseph’s in Emmitsburg, Maryland, and it was shortly after her death that the Sisters became involved in hospital nursing. In their formation young Sisters received instruction in nursing care. S. Mary Xavier Clark, long-serving novice director, wrote a pocket-sized “Instruction for the Care of the Sick,” while S. Matilda McCoskery, an experienced nurse, mentored young Sister-nurses and wrote “Advices Concerning the Sick.”

It was not until after the Civil War when the number of hospitals grew, creating a demand for nursing on a higher level of expertise. Bellevue Hospital in New York was the first U.S. hospital to open a school of nursing based on the system initiated by Florence Nightingale. Others soon followed. The first to open locally was Cincinnati General in 1889. Mother Sebastian Shea started the program at Good Samaritan Hospital in 1896 at the instigation of Hattie Lenegar (later S. Henrietta Marie) who was one of the first graduates. Later, as supervisor of the operating room for 20 years, S. Henrietta Marie instructed nursing students as part of their rotations.

As the years went on nearly every Sister of Charity hospital sponsored a school of nursing. Many Sister-nurses served as classroom instructors and as clinical instructors in each of these hospitals. At Good Samaritan Hospital S. Mary Cyril McNamara directed the school from 1906-1924 where she succeeded in receiving accreditation for the school. Great emphasis was placed on establishing nursing as a profession, so efforts were made to provide students with the best theoretical and practical training. Nurse training was strict and demanding, and S. Mary Cyril maintained a business-like and formal demeanor with the students. She taught them and supervised them, presided over silent breakfasts and quiet dinners, and made sure their uniforms were spotless. In addition to their classes, she gave “little talks” on human relations skills, communication, and dealing with grief. 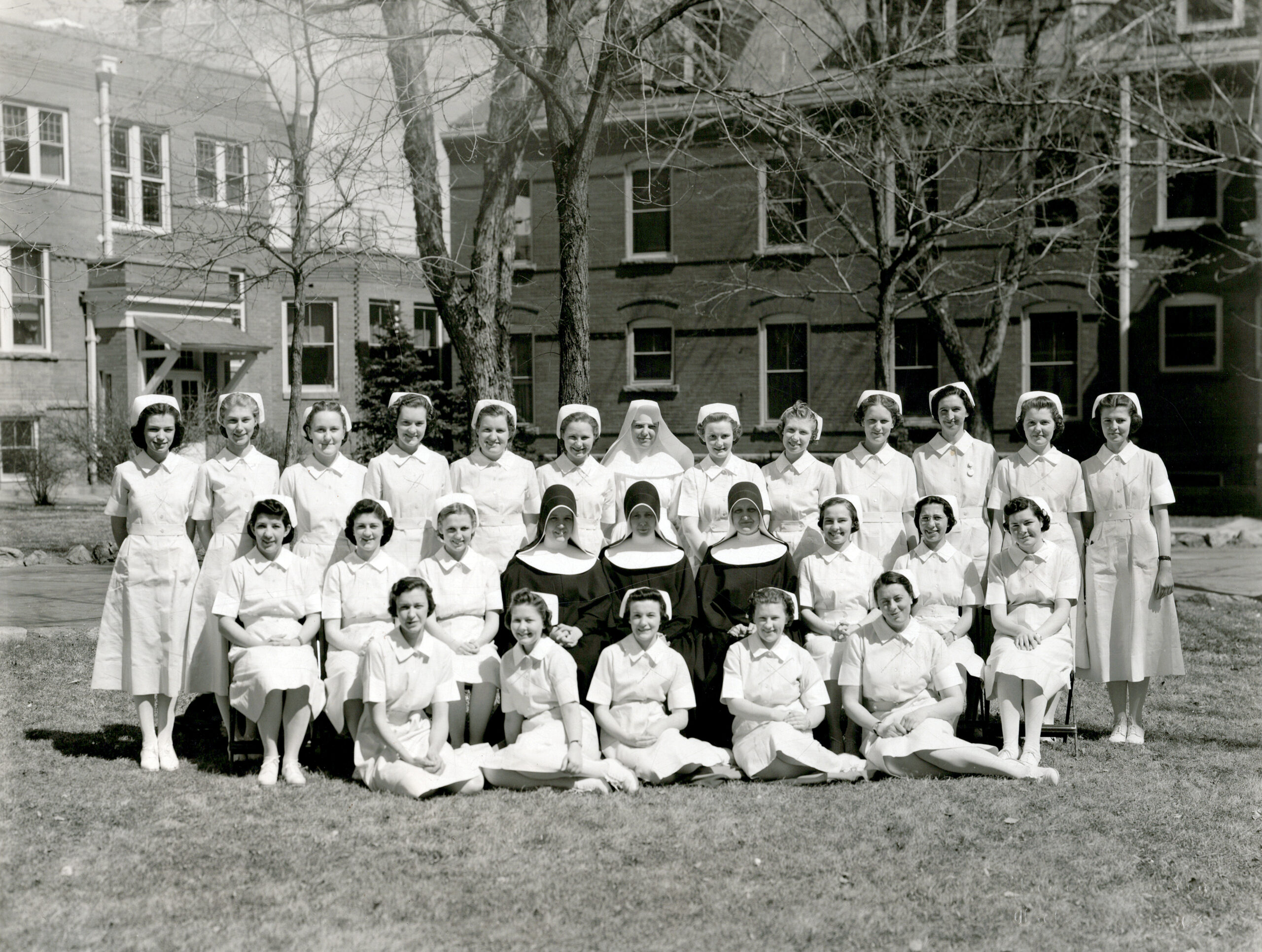 S. Cyril Mahrt (second row, fourth from right) successfully merged three failing Sister of Charity nursing schools in Colorado into the Seton School of Nursing, one of the first central schools in the country.

S. Cyril Mahrt’s distinguished career in nurse education began in 1917 when she was appointed director of the St. Joseph Hospital School of Nursing in Mount Clemens, Michigan. From there she served at Good Samaritan where she established a baccalaureate program in affiliation with the College of Mount St. Joseph. Her most memorable contributions to the field occurred at Glockner Hospital in Colorado Springs. Here she successfully merged three failing Sister of Charity nursing schools – Glockner, St. Mary’s (Pueblo), and Mount San Rafael (Trinidad) – into the Seton School of Nursing, one of the first central schools in the country. Believing in “total care” – physical, mental, and spiritual – she went out of her way to provide special touches for patients. While being firm and professional with her students, she was noted as a gentle, compassionate and generous woman, but also one with “practical idealism,” and a capacity for cooperative planning. From her base at the Seton School, S. Cyril became a recognized national leader in the field of nursing education. She published articles in professional journals, served on local, state, and national committees and boards of professional nursing associations, and on state boards of nurse examiners in Colorado, Michigan, and Ohio.

An eastern counterpart of S. Cyril was S. DeChantal McCarthy who served as director of the Good Samaritan School of Nursing from 1933-’43, and then in the same capacity at St. Joseph’s in Mount Clemens. “She commanded respect. She didn’t demand it, she commanded it,” one student recalled. “She had high ideals and attempted to bring the students up to that level. She was very fair and she was very kind.” Her high standards and expectations left a lasting impression on the students when she told them, “We only keep the cream of the crop.” After a Sister of Charity evaluation of their two nursing programs in Cincinnati in 1949, S. DeChantal was named chair of the Department of Nursing at the College of Mount St. Joseph where she directed the baccalaureate program, soon adding a health nursing component. Spending two decades in total commitment to higher education for nurses, S. DeChantal won recognition on the local, state and national levels, serving on boards and committees and delivering addresses at nurses’ convocations.

A nursing educator to her fingertips, S. Beatrix Carey had served as an excellent and demanding Nursing Arts teacher before being named director of the Good Samaritan school in 1943. Receiving her master’s degree in nursing education from The Catholic University in Washington, D.C. during her tenure, she committed herself to keeping the school on the cutting edge of advancements in nursing education. Dignified, professional, competent, and compassionate, she committed herself to instilling these qualities into her students. Devoted to the Blessed Virgin, she started each class with three Hail Mary’s for “common sense” for her students. S. Beatrix’s next mission was St. Mary-Corwin in Pueblo where she served as director of nursing education for a decade. From there she took a position as associate professor in the Masters of Nursing Program at Wayne State University in Detroit, the first time in the university’s history that a Sister was appointed to a faculty position in that school. Like her counterparts, S. Beatrix was active on many levels in various nursing organizations and on state boards of nursing.

Many Sisters of Charity who devoted years of their ministry to the education of nurses cannot be mentioned here but remain as significant figures in the lives of many nurses past and present. Among them is S. Mary Angus Barry, who after receiving a Master of Science in Nursing Education from The Catholic University, served as director of the Seton School of Nursing in Colorado Springs from 1961-’69. Compassionate and professional as a nurse, she was kind and loving as a person, setting a high standard for her students. Taking a two-year hiatus from Penrose Hospital from 1969-’71, she established the nursing program at El Paso Community College (now known as Pikes Peak Community College) in Colorado Springs. Then, returning to Penrose, she served as director of nursing education and in-service education during the 1970s. 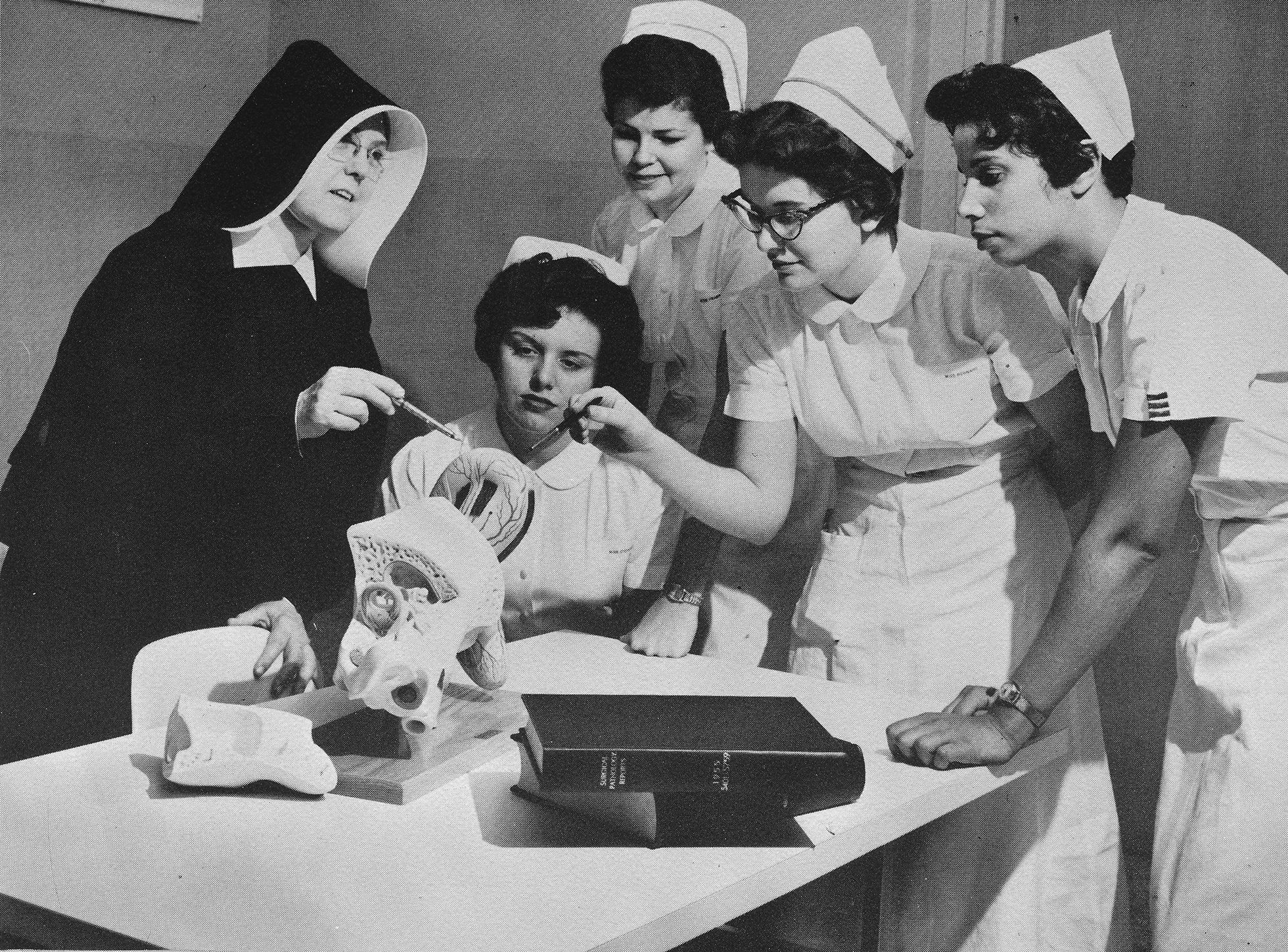 S. Andrew Hanlon (left) was Good Samaritan Hospital’s director of the school of nursing from 1958-’70.

A final mention should be given to S. Andrew Hanlon, “five feet tall but oh so mighty.” As director of the school at Good Samaritan from 1958-’70, she told her students, “It is important we are not only good nurses, but that we are professional women.” She taught a Professional Adjustments Class that featured formal teas complete with silver tea service, and placed great stress on medical ethics and Catholic mortality. Each of these Sisters, and many unnamed here, devoted their lives to preparing competent and compassionate nurses. The thousands of graduate nurses from Sisters of Charity sponsored programs bear tribute to the fruits of their labors.