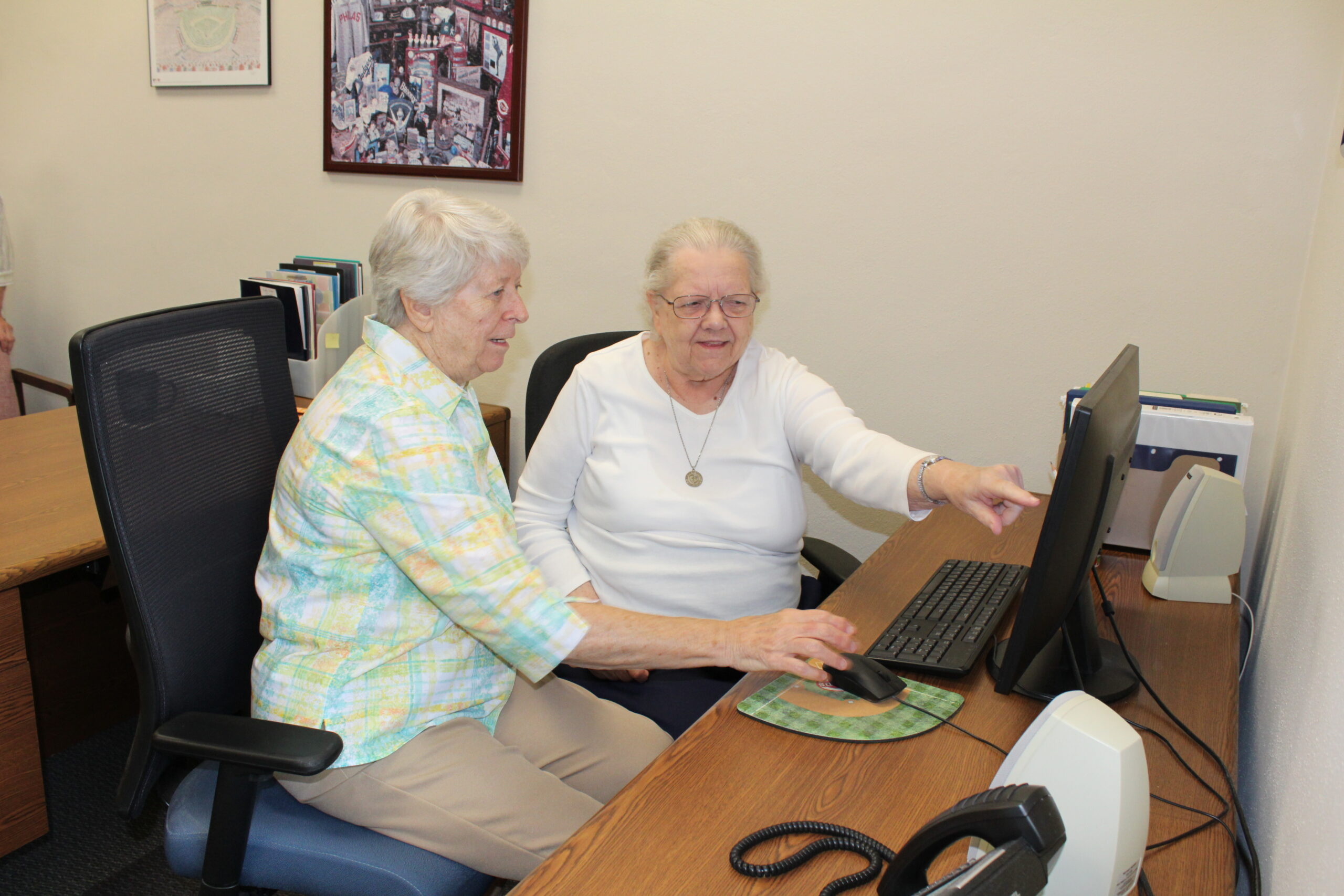 S. Helen Berson (right) has been a mentor to S. Thelma Schlomer (left) in her responsibilities in the Finance Office.

There are definite benefits that come from the home where you were nurtured that give you gifts needed for living. As S. Helen Berson looks back on her many life blessings, she remains grateful for her firefighter father and his common sense attitude. She learned at a very young age not to be upset over small things; to be reasonable; to sort it out. Little did she know that this attitude for living would serve her throughout her adult life, particularly in her unusual ministry callings of pharmacy and finance.

When responding to her vocation call to become a Sister of Charity, S. Helen was surprised to learn that the Congregation was seeing her as a pharmacy school candidate at the University of Cincinnati. This was not the norm; however, the Sisters of Charity leaders were witnessing the need for trained Sister pharmacists as the SC hospital ministries were quickly expanding in the mid-1950s. Early on S. Helen was provided with ‘hands on’ opportunities to learn while living and apprenticing at Good Samaritan Hospital in Cincinnati. She earned her bachelor’s degree in pharmacy in 1961 and served in varied hospital settings over the next 36 years, including San Antonio (Kenton, Ohio); St. Mary-Corwin (Pueblo, Colorado); Good Samaritan (Cincinnati); a coal miner’s hospital in Whitesburg, Kentucky; and the last 10 years at Cincinnati’s Pauline Warfield Lewis Center. There she served individuals with intellectual disabilities and mental illness through drug therapy.

A defining moment in S. Helen’s career was to help create and implement a decentralized pharmacy system which is the 24/7 model of operation. This included new packaging, a simplified charging system and establishment of patient profiles, all within a computerized system that was starting to dominate the field in the late 1970s. S. Helen has appreciated the benefit of having other family members also working in the health care field; with her brother and nephew as medical doctors, and her sister-in-law as a nurse. Family conversations can be intense and engaging. She commented, “There is always one of us sharing a new, unique experience that is clearly appreciated by the others.”

Upon her retirement from pharmacy in 1997, S. Helen came to the SC Finance Office, responding to the request of S. Roslyn Hafertepe, Community Treasurer at the time. Shortly after Assistant Treasurer S. Grace Murphy died suddenly. S. Helen’s calm demeanor and trust among the Sisters was immediately appreciated. As current CFO Tim Moller puts it, “S. Helen, throughout her years of service in the Finance Office, has provided professionalism, keen intelligence and sensitivity. She has provided trusted support for her Sisters during periods of change and challenge.”

S. Helen would say of herself, “Over the years I became a familiar person to call to get answers or to give direction to solve a problem. This has been a part of this ministry I liked most, helping me get to know my Sisters personally.”

These same traits served S. Helen well as a Network Leader for her Sisters for six years, helping with problem solving and offering pastoral support. In her almost 25 years in the SC Finance Office S. Helen also mentored S. Thelma Schlomer in her responsibilities, helping her to learn the ‘ins and outs’ of taxes, variations in state and federal laws, car replacements and working with Sisters’ budgets. As she retires this summer from her corner in the Finance Office, S. Helen is trusting to be remembered as one who served and valued the ministries to which she was called. What will she tend to first? A healthy rest!

After almost 25 years of service to the SC Finance Office, S. Helen Berson (third from right) celebrates her retirement.