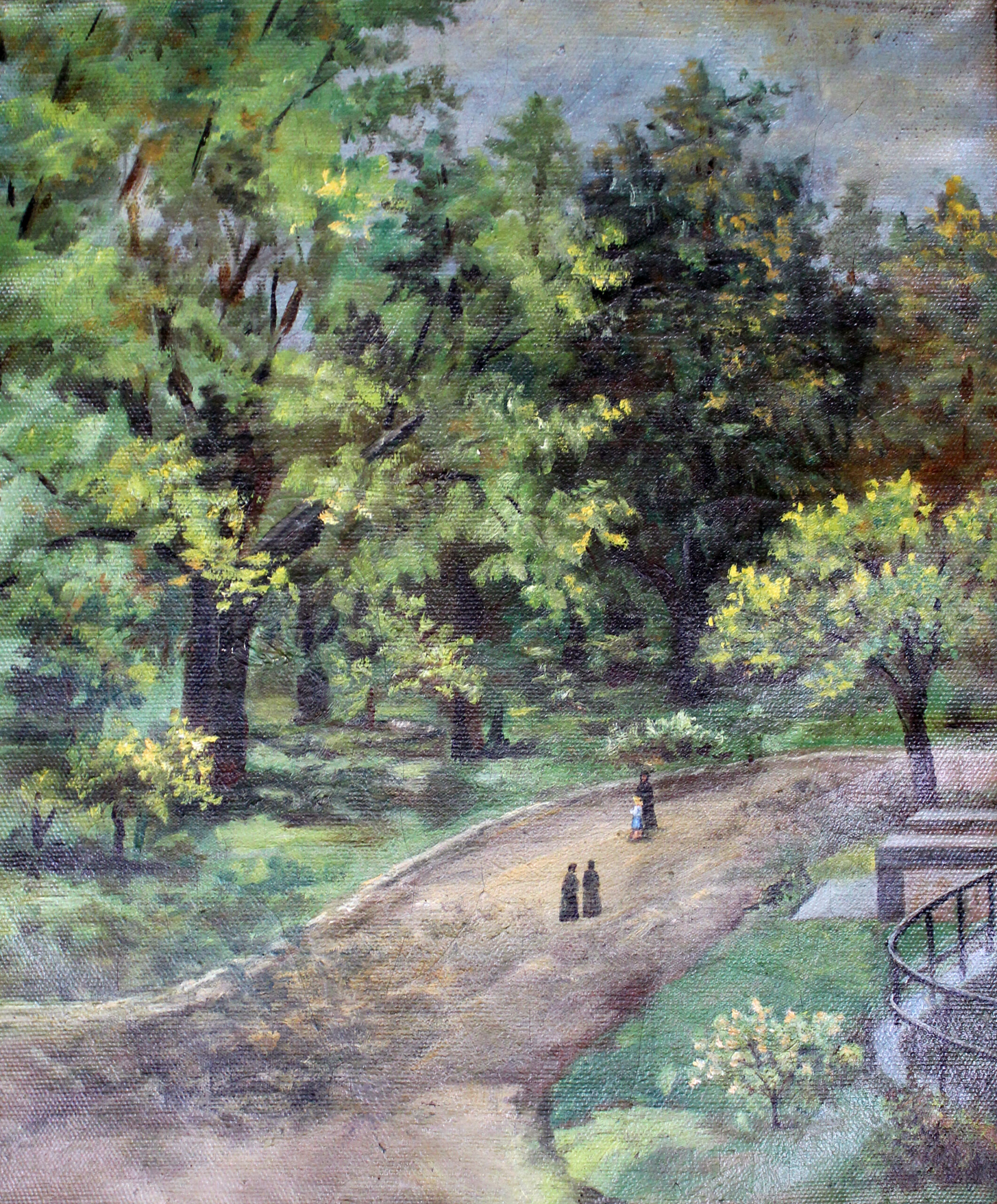 S. Ann Xavier Magevney’s painting of St. Aloysius Academy reminds us of the Sisters of Charity’s years of service at the boarding school.

Nestled in the Sisters of Charity Archives collection is a charming painting by S. Ann Xavier Magevney of two Sisters strolling along a shaded driveway at St. Aloysius Academy in Fayetteville, Ohio. It evokes a time past when young boys romped on the bucolic grounds of this 13-acre campus that boasted flower beds and vegetable gardens.

The academy had its origins near St. Patrick’s Church in Fayetteville when the pastor asked the Sisters of Charity to open a boarding school in 1859. Since the boundaries of the parish encompassed a large area, he felt a boarding school that the children of the village could also attend would serve the needs of the parish. The school was initially named St. Patrick’s Academy. Parishioners were generous in their assistance in supporting the school, and according to S. Rosanna Barker, donations of food from the farmers was common practice. “Often a Sister went out in a spring wagon to collect any and all, even to a pig as the story was told on one occasion.”

The need for more space and larger buildings prompted the parish to donate 10 acres on the south side of the village to the Sisters in 1883. The Sisters then erected a four-story brick building and moved the old buildings from their original site. By 1890 the school was again crowded for space so the younger boarders, ages 3 to 10 years old, came to reside and be educated at Mount St. Joseph, the Sisters’ Motherhouse, until larger facilities could be constructed. By 1906 a new building was completed and all the students were reunited at St. Aloysius Academy in Fayetteville.

There was a time in the school’s early days when fruit trees thrived, chickens supplied the house with eggs, and even a few turkeys were kept. One Sister even tried her hand at raising pigeons, and the school usually had a pony or two. One of the chaplains helped the boys build a fish pond, and at S. Leona Murphy’s request, a concrete walk flanked by maple trees was built around it. As the years progressed, tennis courts, a ball diamond, and outside grills were added. 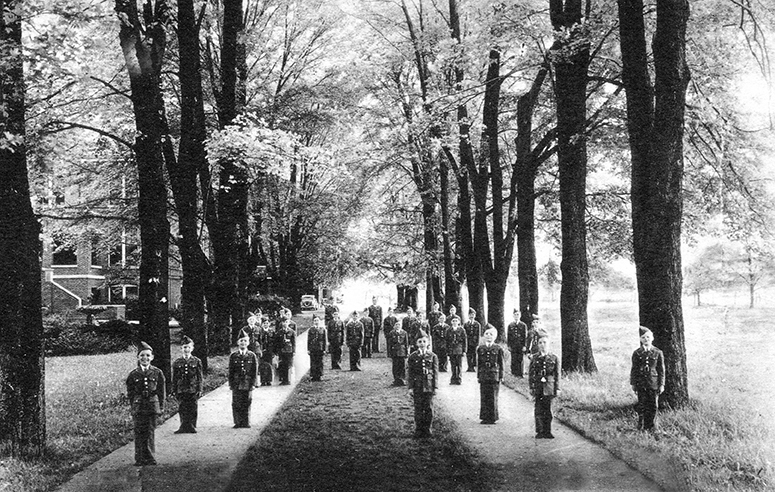 Twice during St. Aloysius Academy’s history the school was designated a military academy.

Twice during St. Aloysius’ history the school was designated a military academy. For a brief time in the teen years of the 1900s, the students wore military-style uniforms, received instruction on marching using wooden guns, and put on exhibitions in the village. Again, beginning in the 1930s a lieutenant from Xavier University taught drills and provided instruction. The students again wore military uniforms, and were on display with drills and marches in the village and neighboring areas as well as at the annual Holy Name Parade sponsored by the Archdiocese of Cincinnati. Taps and Reveille were part of their daily routine as was the raising and lowering of the American flag on the school grounds.

Through the years proof of the graduates’ esteem for the school was borne out by the many who returned to visit, renew old memories, and note any changes that had occurred. With the announcement that the school would close in 1952, there were many surprised and saddened alumni, Sisters who had served there, and people from the area who were grieved to see the passing of what had been a fine school for more than 90 years. 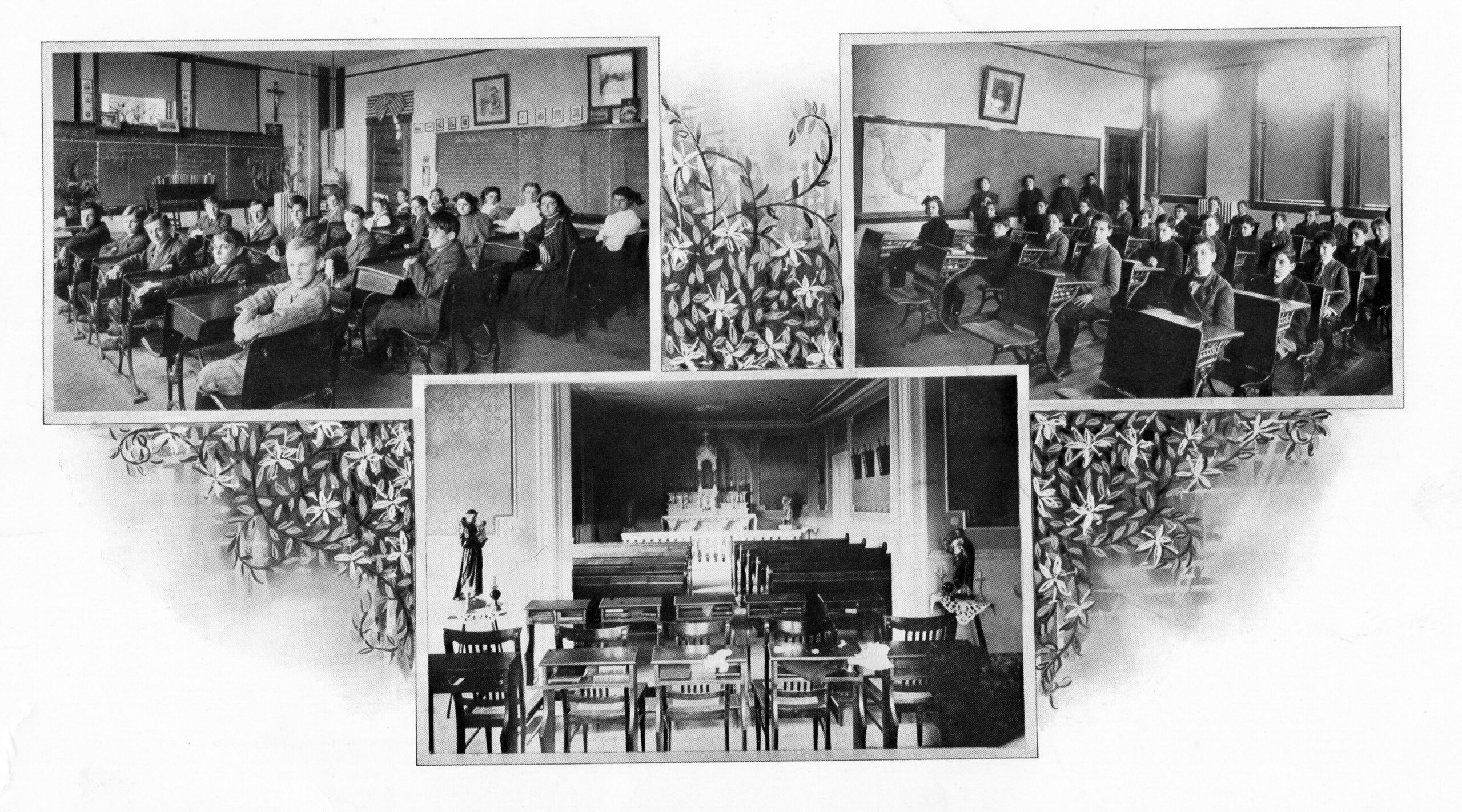