S. Teresa Dutcher (far left) was one of the many Sisters of Charity in Poland in the mid-1990s tasked with teaching the indigenous Sisters English.

Call them opportunities or call them challenges, S. Teresa Dutcher seems to sense the appropriate moment and the favorable time. A Golden Jubilarian S. Teresa agreed to look back at some of her life opportunities and the persons of influence who crossed her path.

During high school in Leslie, Michigan, in 1965, a new opportunity was made available to students who wished to enroll as full-time students at Michigan State University for their senior year. S. Teresa said to herself why not? While at MSU she met a group of Sisters of Charity at the Campus Parish Center: Sisters Ann Seubert, Daniel Miriam (Helen) Flaherty and Annina Morgan. Not being a Catholic she wanted to learn and know more; they did not disappoint. She developed a friendship with S. Ann, and soon after became Catholic, all while pursuing her studies at MSU. She still desired to learn more about this “Sister life” they were living. They were authentic, real human beings!

In the late 1960s, post Vatican II, the Sisters of Charity were not admitting new Sisters, particularly a convert to the faith. S. Teresa corresponded with Mother Mary Omer on several occasions and after asking again she was offered a living opportunity at St. Joseph House and teaching at Marian High School. She entered the Community on Aug. 24, 1971. During this time Sisters Jane Grosheider, Maria Garlock, Laura Mary Liegibel and Mary Ann Humbert entered her life. What followed was the SC Formation Program (Intercommunity with the Oldenburg Franciscans) and the opportunity to learn from an outstanding high school educator, S. Laura Mary, for whom she developed great respect. S. Claire Foken became an important teacher of master scheduling which S. Teresa put to good use.

When an opening was posted at Seton High School in Cincinnati, S. Teresa saw this as the favorable time to apply. She liked that it was ‘ours’ [a sponsored ministry of the Sisters of Charity] as well as close and convenient, and she could apply her knowledge of preparing the master schedule, a ‘puzzle’ she enjoyed. This began a career-long 25 years of dedicated service at the school (1993-2018), which included ministering as social studies and religion teacher, department chair, administrator and theology chair. 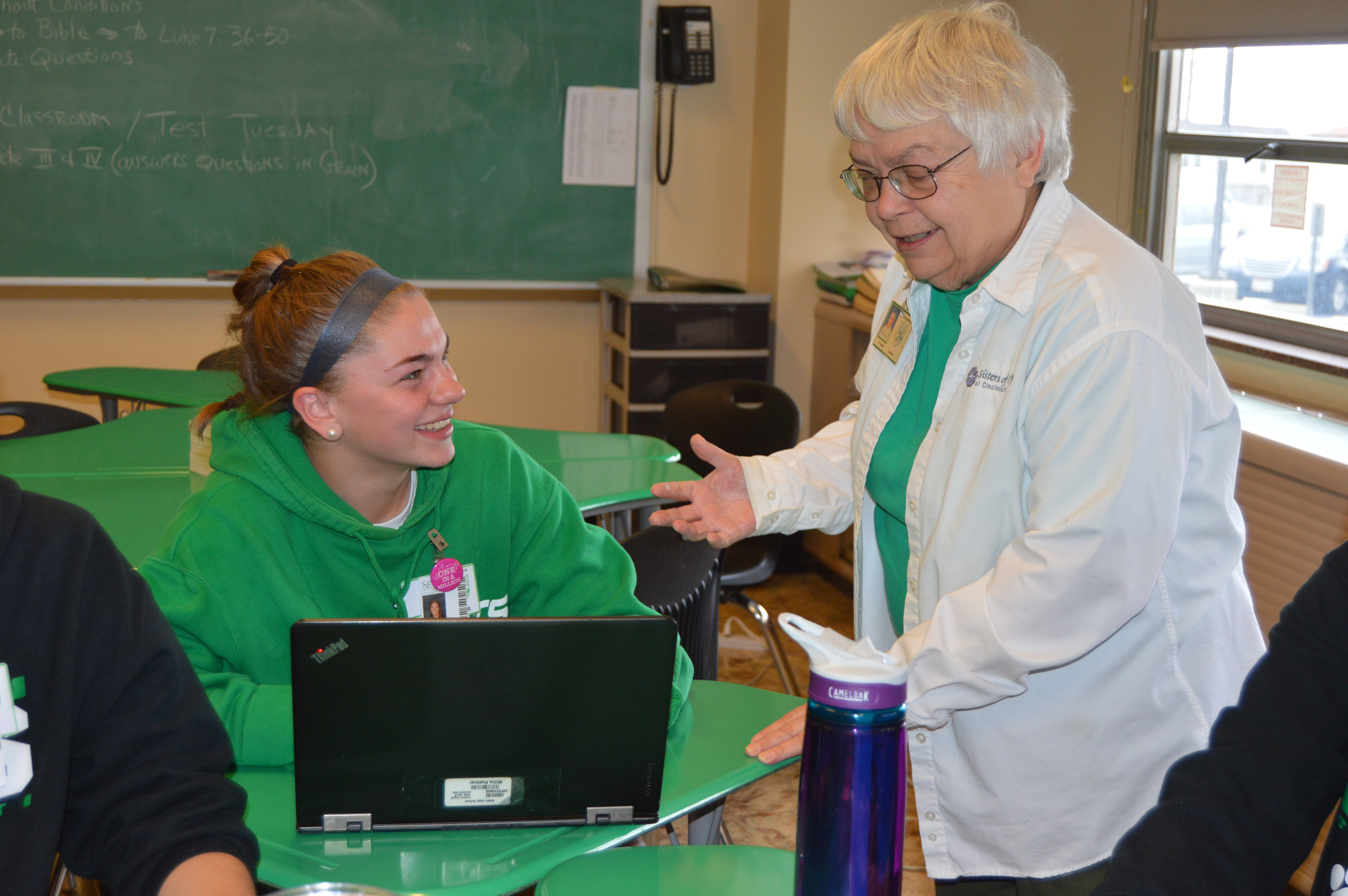 When thinking about her years working with teens, especially juniors and seniors, S. Teresa said she enjoyed their curiosity, energy and ability to keep her young. They laughed at her jokes. She shared, “It is a delightful time of life. They gave me credit for having life experiences behind me. In the classroom they understood that they could disagree, but not be disagreeable.”

In 1995 the Archdiocese of Cincinnati offered the possibility of volunteering as an educator in Eastern Europe. S. Teresa saw this as a favorable time to offer her services as an educator to Polish Sisters. She had an earlier experience in 1978 while at Marian High School to visit five Republics in the Soviet Union which lingered in her heart. After one five-week program in Poland she saw that there was still much to be done. With residual feelings of a task unfinished, she volunteered for a second year. She viewed this opportunity as part of the harvest and promise that our growth in understanding and friendship can be promoted across the world.

For S. Teresa, Michigan is home and where a few family members remain; her two brothers reside in Arizona and Colorado. Her mother’s advice when she informed her family of her decision to enter the Sisters of Charity, “If you are going, become true.” Her family did not stand in the way.

The opportunities to come to know the Sister of Charity women who crossed her path have made all the difference. She values their goodness, their influence and the ways in which they give energy to causes greater than themselves. The initial invitation to be open to Catholic and religious life while at Michigan State University was a most favorable time for a lifetime commitment. It has made all the difference.