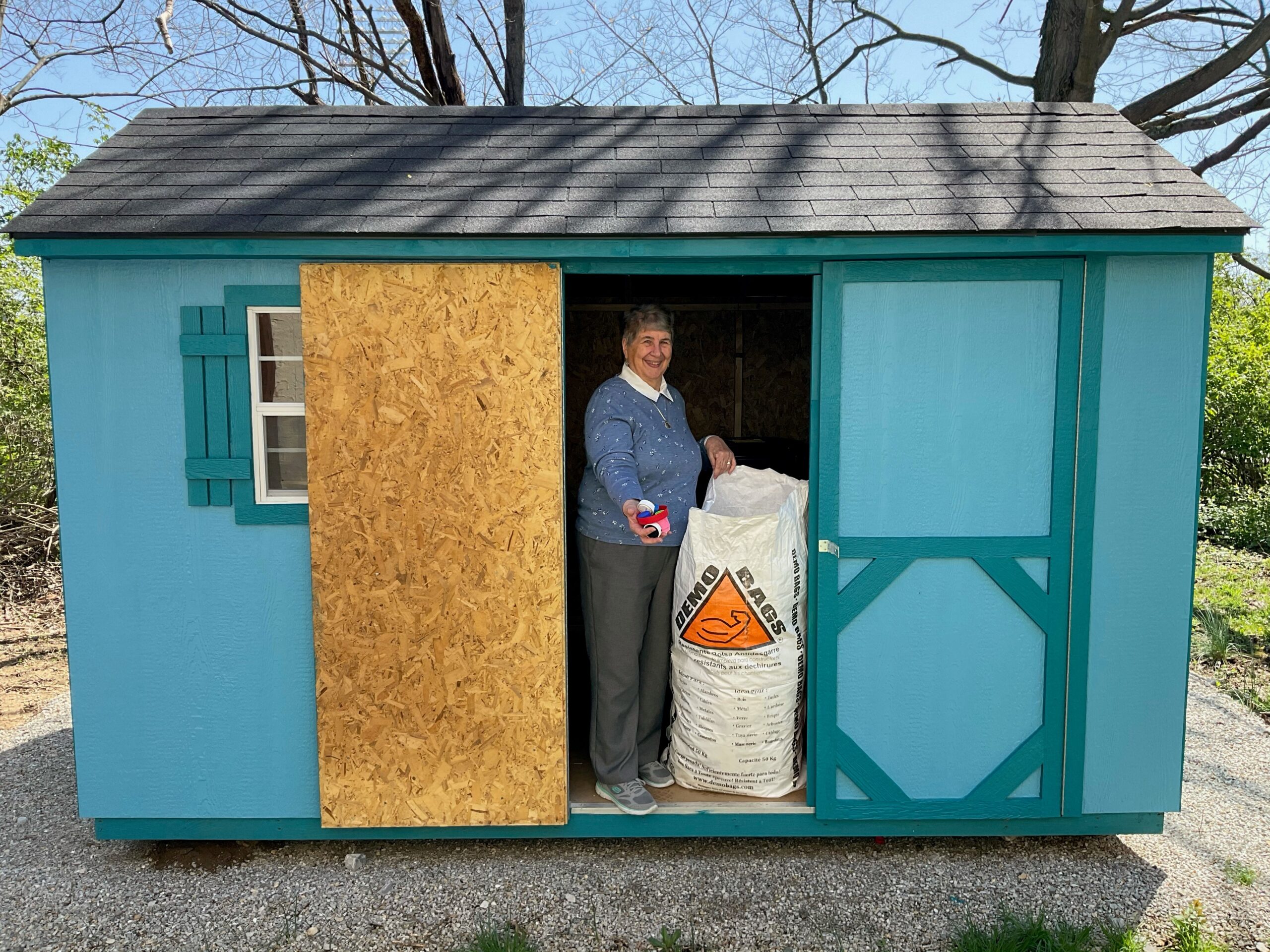 S. Caroljean Willie stands near the shed purchased to hold all of the cap donations EarthConnection receives from enthusiastic participants.

“Being an influential leader, you have to model what you are trying to teach or lead. You have to be it. You’ve got to do it. Don’t talk about it. Don’t write books about it. Do it.” ~ S. Paula Gonzalez

The words of the late S. Paula Gonzalez were the inspiration for EarthConnection (EC) Administrative Assistant Sue DiTullio to develop the ministry’s Caps to Benches program. In September 2019, staff – S. Caroljean Willie, S. Winnie Brubach and Sue – were brainstorming new ways to continue the work of EC when S. Paula’s quote came to mind. Sue began looking for possibilities and learned of a program that collects recyclable caps and lids to make into benches. “I instantly thought this would be a cool way to build our relationship with the Girl Scouts and to teach sustainability to younger kids,” she said. “When they learn it at an early age, it stays with them the rest of their lives.” With a little more research she was able to find a partner in Green Tree Plastics in Evansville, Indiana.

The program requires participants to collect, wash and weigh 200 pounds of bottle caps and lids that will be recycled into a bench for others to enjoy. It aligns perfectly with the mission of EarthConnection and offers a real-life example of sustainability as it engages all generations in recycling and giving back to the community. As its motto states: ‘Every cap or lid that goes into a bench does not go into the landfill. A win-win situation for all.’

What could not have been predicted was the outpouring of support and enthusiasm related to the program. In what typically takes years to collect and repurpose, it only took the team six months to collect enough caps for one bench. They have received donations from 27 cities across the country; some spending between $15-$30 dollars just to mail them to EC. From Colorado to Florida – and everywhere in between – Sue and Sisters Cj and Winnie have received endless deliveries, all from individuals just looking to find a place other than the landfills to put their lids.

Locally, the response has been just as positive. In addition to the Girl Scouts, students from Mount St. Joseph University have become involved, helping sort the lids and making sure they are cleaned properly. Sue says it’s been a joy to see students of all ages embrace this project, learn from it and want to continue the efforts in their own lives. And now that there are physical benches for them to see firsthand, it creates even more excitement and drive. “The college students can’t believe that the benches are made from caps,” she says. “Now they are bringing their caps to us to be recycled.” 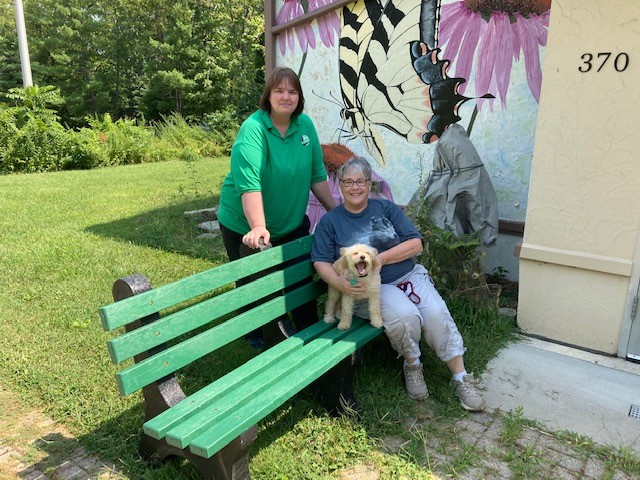 Sue DiTullio (standing) and S. Winnie Brubach with one of the benches made from recycled caps and lids.

Sisters and Associates have gotten involved as well. One example is S. Katharine Pinto, who tutors students at St. Dominic. She enthusiastically got her fourth grade religion students involved when the Caps to Benches program was first initiated. As they were learning about Dorothy Day and her activism, S. Katharine suggested her students do so as well. She educated them on the program at EC and before long collections were coming in on a regular basis. S. Katharine used the opportunity to teach her students about sustainability and the impact they were making, and she said it was wonderful to see them take charge at home, educating not only themselves about the issue but their family members as well.

The generosity has not stopped with collecting caps either. There is an expense to making the benches, each costs $250 to produce. In the three years since the program was started, Associates have donated the funding for all three of the benches. Associate Dee Mansi made the donation in memory of her sister; Associate Liz Maxwell in memory of her husband, Bob, and the Florida Associates in honor of S. Mary Loyola Mathia.

Sue says that EarthConnection has collected approximately 1,700 pounds of caps since the program’s inception. And even with the challenges faced when the COVID-19 pandemic hit in 2020, people continued to donate their caps. “We couldn’t sort or go down to Evansville for months and the donations started to build up,” she remembered. “The Earth Room at EC was almost half full with caps. So we finally decided to purchase a shed and put it in the back of the building to store the caps.” Currently they have enough caps for two more benches to be made; one they hope to find a home for on the Motherhouse campus and a second they would like to donate to the National Shrine of St. Elizabeth Ann Seton in Emmitsburg, Maryland, from the SC Associates.

And while the process is time consuming, it’s the long-term benefits that make it worth their time and effort. “It’s a win-win situation,” she says. “We are keeping these items out of the landfill, while also teaching. So many have written saying they love the idea, love the process and love having an avenue to go through. Many say they appreciate how early we are starting with involving younger kids. By making it so simple, people can embrace it a lot easier.”

Looking back on what they started just a few years ago, Sue still thinks of S. Paula’s words and knows the late Sister would be pleased. “Paula would want us to keep it going,” she said of EC’s founder. With a mission to teach, EC’s Caps to Benches program has encouraged action and awareness at the youngest of ages. “Do it.” The words of S. Paula continue to inspire all ages into the future.