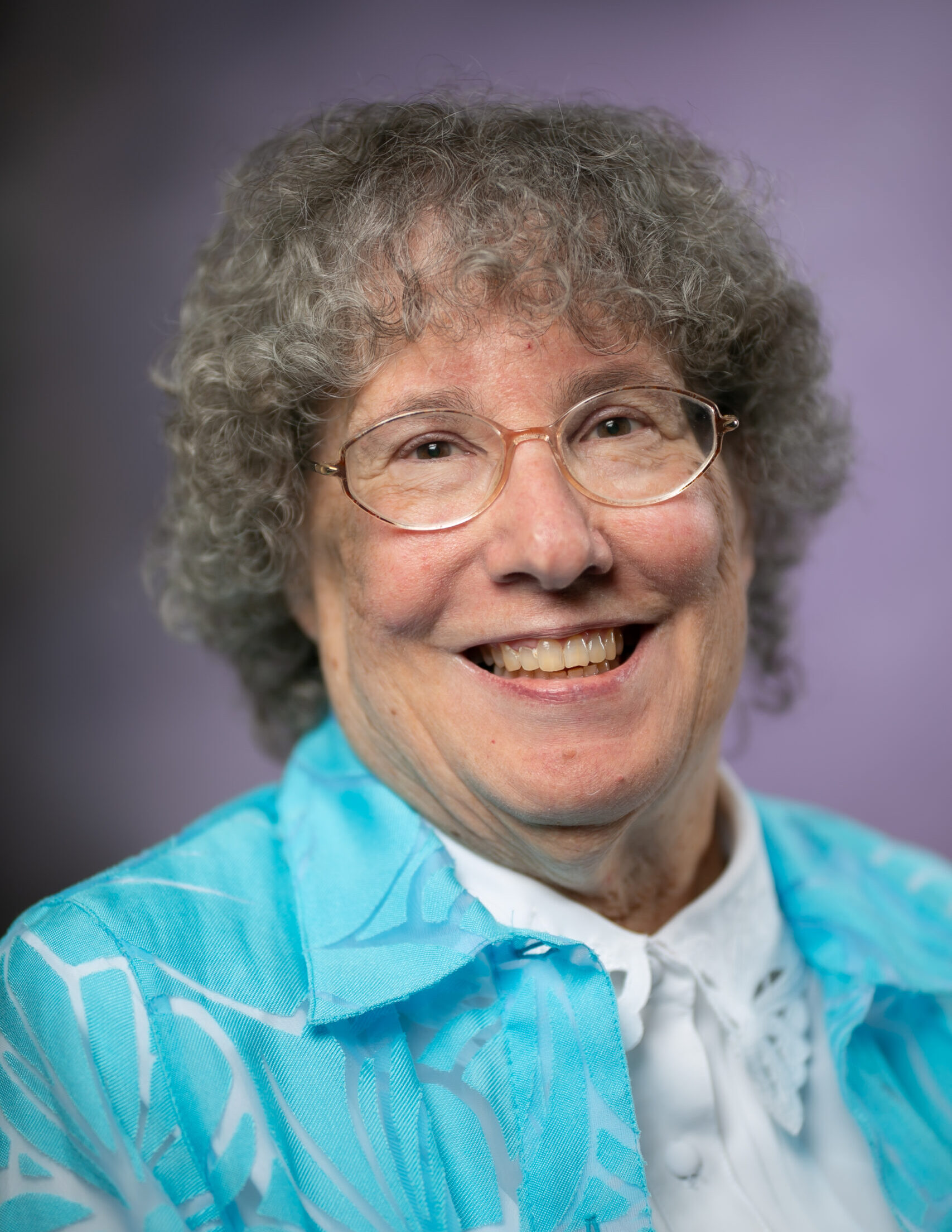 Carolyn Davis became an SC Associate in Mission in 2013.

It has been said that one of the greatest gifts someone can give is their time. At Seton High School, we have been blessed with so many selfless volunteers over the years who have given their time, talents and treasure. One of those extraordinary volunteers is Carolyn Davis ’60. With a life fueled by faith, she has found that she has always felt guided in the right direction to work and volunteer in a rewarding and faith-filled environment. Carolyn and her twin sister, Barbara, grew up in Oakley until their parents moved their family of four to Price Hill in the spring of 1956. The following year they attended Seton where Carolyn embraced her high school years by finding activities that fit with her passions. She excelled in math and Latin. “I was impressed with how much knowledge my teachers had and how much interest they took in every student,” she said. Carolyn and Barbara got involved in clubs. “We were part of the Glee Club our freshman year and part of the Mother Seton Guild for all four years,” Carolyn said. “And we always had fun selling candy bars and collecting for the annual paper drive.” At the beginning of their sophomore year, they started volunteering to help their Biology teacher, S. Paula Gonzalez, SC. “We would help her after school and even over the summer with whatever help she needed in the classroom,” Carolyn explained. Upon graduation, Carolyn received the Archbishop Medal for Religion at the graduation awards ceremony. “This was such a surprise for me,” she added. “My four years at Seton, along with my parents, really laid the foundation for my life.”

Two weeks after graduation, Carolyn applied for a job with Central Trust Bank where she could conveniently walk to work each day. In 1963, she started working for the Internal Revenue Service, and that became her career for nearly 32 years. During this time she professionally embraced many opportunities including bookkeeping, clerk typist, clerk reporter, volunteer and education coordinator, taxpayer service representative, taxpayer service specialist and finally as a group manager. She also took some Xavier University classes after work to be able to grow professionally and as a leader. “In my last position I was responsible for our two volunteer tax preparation programs where I was tasked with recruiting and training volunteers as well as visiting some of the volunteer sites during tax filing season,” she explained. “I also prepared the quarterly volunteer newsletter.”

Carolyn leveraged her professional skills into her personal passions for volunteering. In the 1970s she became active at St. Teresa, which was her parish at that time. “I was a Lector and Eucharistic Minister,” said Carolyn. “I also helped with the Baptism preparation program, finance committee, RCIA, worship committee and parish council where I served as president for two years.”

Volunteering became a way of life for Carolyn, and there were many weeks that she was at church for three or four evenings. Her career path and her faith-based volunteering opportunities were very fulfilling. “Looking back I would say that it was the Holy Spirit at work,” she said. She continued pouring her heart into volunteering while working her full-time job until she retired from the IRS in 1995. About a year later, while still giving her time to St. Teresa, Carolyn was having a conversation with the pastor, Fr. Larry Tharp. “He said he needed a pastoral assistant and asked if I would be interested in the position,” she explained. “I told him that I would love to work in the parish!” For the next 10 years, Carolyn wore many hats in her job. “According to Fr. Tharp, my job description was to do anything that he did not want to do,” Carolyn said with a laugh. Her responsibilities included being in charge of the RCIA program, preparing the weekly bulletin and reviewing all of the marriage preparation documents. “I felt truly blessed to have this position, which was not a job for me but a ministry,” added Carolyn.

In 2006, she joined St. Dominic parish and again found that the Lord opened up doors for her. “I immediately became a Lector and Eucharistic Minister. Carolyn spent a lot of time with her aging mother until she passed away in 2008. “Since then, I have helped with the annual festival and soliciting donations for booths,” she said. “I also started working at St. Dominic 10 hours each week for the next few years as the alumni coordinator. I was in charge of class reunions, prepared the monthly newsletter and created a database of graduates by gathering information,” she explained. “There were only a few names with contact information on the alumni list when I started, and by the time I left there were over 2,500 names.” Carolyn officially retired from working in 2010 at age 68; however, her compassionate heart of service kept her volunteering. Shortly thereafter, she started giving her time at Bayley in the gift shop where she spends a minimum of three hours a week selling items and refreshments. “I see this as a ministry as I spend time talking to the residents who come in and sometimes just need someone to listen to them,” she said. “I look forward to this each week.” Carolyn has been involved in the RCIA program at St. Dominic since 2013. “What a blessing it is for me to see our Catechumens and candidates receive the sacraments and to walk our faith journey together,” said Carolyn, who also began volunteering with the Bereavement Ministry around that same time. “I meet with the family to plan the funeral Mass, prepare all the paperwork, assist with setting up for the Mass and being there that day,” she explained. “What a rewarding ministry this is for me, knowing how much the families truly appreciate my presence and assistance during this very difficult time in their lives.” 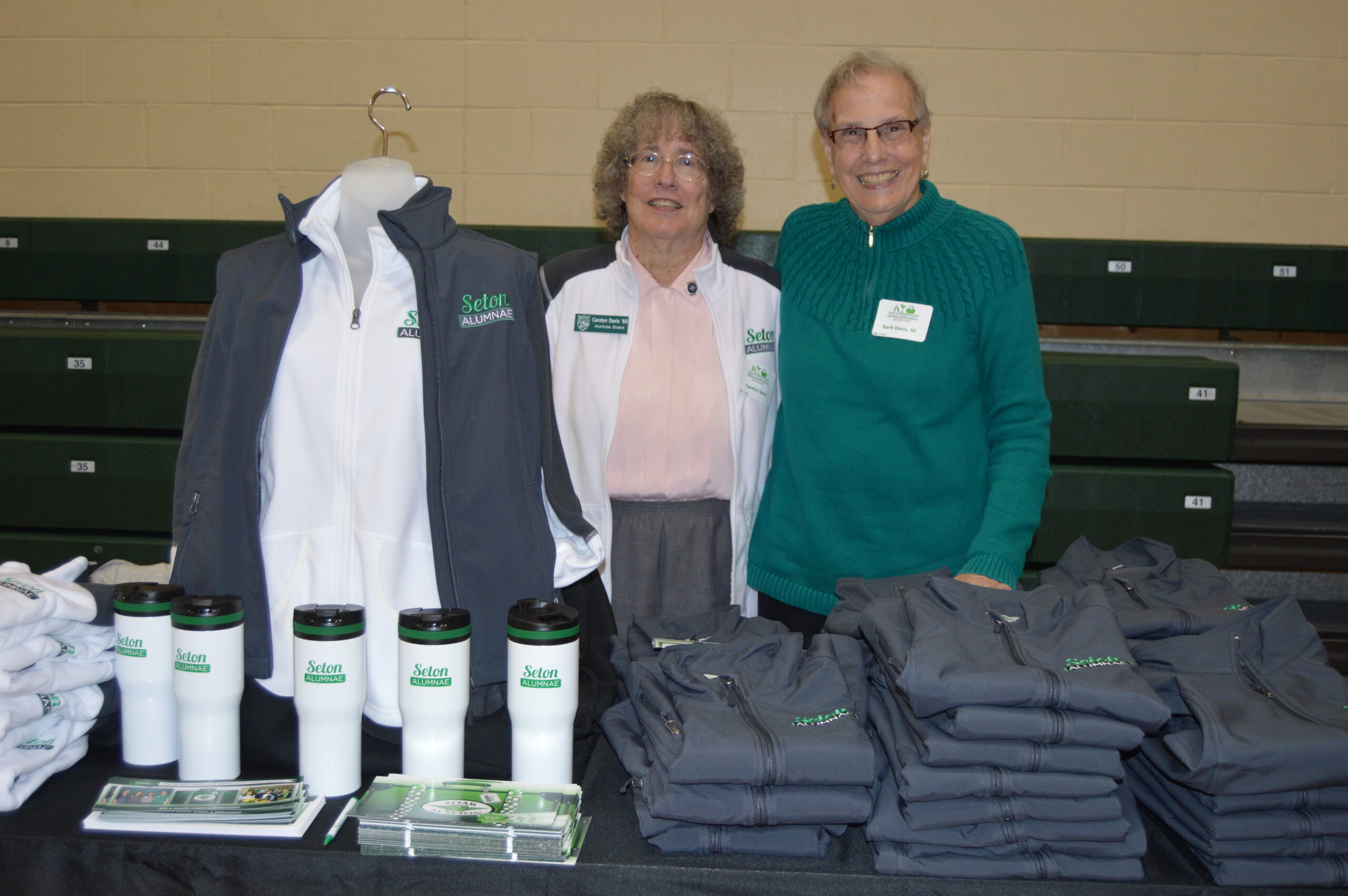 Carolyn has been an incredible supporter of Seton and the Sisters of Charity for many decades. She first became involved at Seton as an alum in the late 1960s by helping to raise money through an annual card party and participating in the Sunday Afternoon of Reflection. She volunteered for a while in the library; and in more recent years she has dedicated countless hours to help in the Advancement Office, specifically with alumnae information. “I help update class lists and information when the post office sends notices of undeliverable mail. I volunteer at the Alumnae Walk, Setonsation and Girls Night Out, as well as other events,” she said. Carolyn has also served as a mentor for senior project, and she is a sponsor of Seton’s 31 Women Scholarship.

Around the same time Carolyn started her first job out of high school, her twin sister, Barbara, entered the Sisters of Charity. While Carolyn has been involved with the Sisters since then, she officially made her commitment and became a Sisters of Charity Associate in 2013. “Part of their Charism Statement reads, ‘True to the spirit of St. Elizabeth Ann Seton, we are called to reliance on the Spirit. We vow our lives to our God with whom we walk in humility, simplicity and charity. We dare to risk a caring response,’” said Carolyn. “Since becoming an Associate, I feel that I am living, and have been living, the Charism Statement through my volunteer activities and the ministries over these many years, and I will continue to do so.”