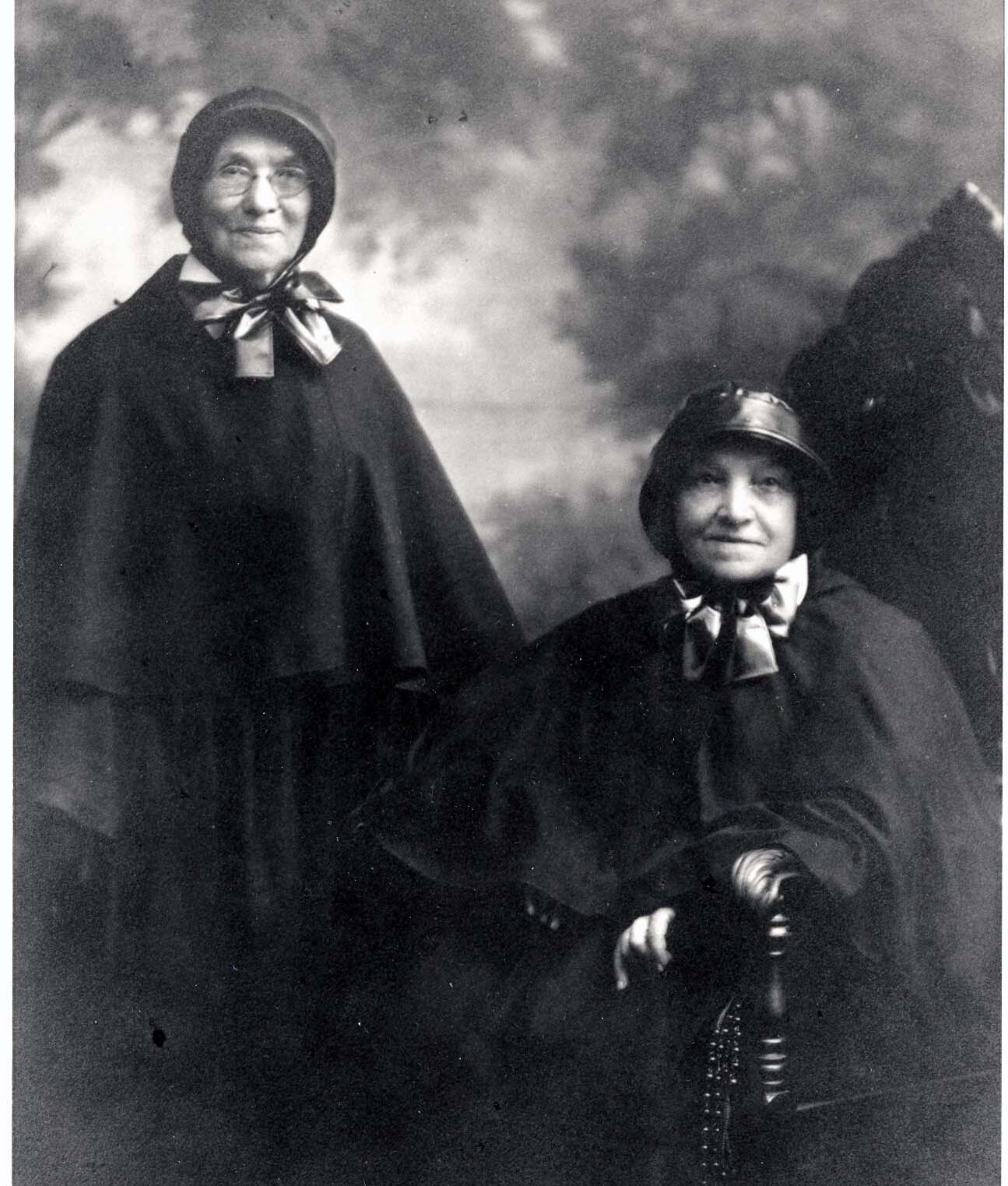 Let us celebrate 125 years of social, educational, and health services outreach to the poor and needy in Cincinnati, Ohio through Santa Maria Institute. Sisters Justina and Blandina Segale began their work among Catholic Italian immigrants in September 1897, and the “The Santa Maria Italian Educational and Industrial Home” was incorporated on Dec. 8 of that year. The Sisters’ outreach quickly expanded to other immigrant groups as well as to anyone in need regardless of faith or nationality. That work has continued without interruption, always evolving and adapting as the needs of the people of Cincinnati have changed.

Sisters Justina and Blandina were born in a small mountain village near Genoa, Italy, and immigrated to the United States with their family when they were young girls. Despite the family’s early economic struggles, both received fine educations that included attending Mount St. Vincent Academy. Their compassionate hearts were evident even in their youths when they brought solace and assistance to cholera patients in their homes. The sisters’ generous spirits continued when they both joined the Sisters of Charity in 1866.

By the time the two young women were called upon to work among the Italians in Cincinnati they were veteran women religious who had served in the Frontier West (S. Justina for 15 years, S. Blandina for 21 years) as well as in schools in Ohio and Michigan. Their new endeavor began in August 1897 when Mother Mary Blanche Davis asked S. Justina if she and S. Blandina “could do anything for the poor Italian children of the city.” S. Justina assured Mother that they “would gladly undertake anything on their behalf.”

Given five dollars to “go and explore the conditions,” the two Sisters agreed: “If it is God’s work it will succeed despite opposition – if it is not his work, we do not want it to succeed.” Despite a difficult beginning, they confidently believed it was God’s work, “so we do not fear though we have nothing to begin with.” Assured of the assistance of the Sisters of Charity, they immediately enlisted the support of local priests as well as Catholic Italian families. Their first efforts involved gathering the newly arrived in small groups to encourage them in the practice of their faith and to determine their needs. After early struggles to start a parochial school for Italian children, they realized the necessity of a neighborhood center for their work. Finding a penny on the street, S. Justina wrote, “that is the nucleus of our funds for the purchase of a house. … A penny and two sisters are nothing. A penny, two sisters and God are omnipotent.”

Despite their optimism, the Sisters spent their early years in donated and rented space. Having no money, they held bazaars, accepted donations, and relied on Divine Providence. More than once it seemed they would not be able to continue. However, with the help of volunteers dubbed “Willing Workers,” they continued and expanded their outreach. In addition to the schools and home visiting, a small army of Santa Maria volunteers assisted in teaching Sunday school and evening classes, visiting hospitals and the sick in their homes, and the city jail, workhouse, and house of refuge. They assisted the Sisters in starting sewing classes as well as many other activities. 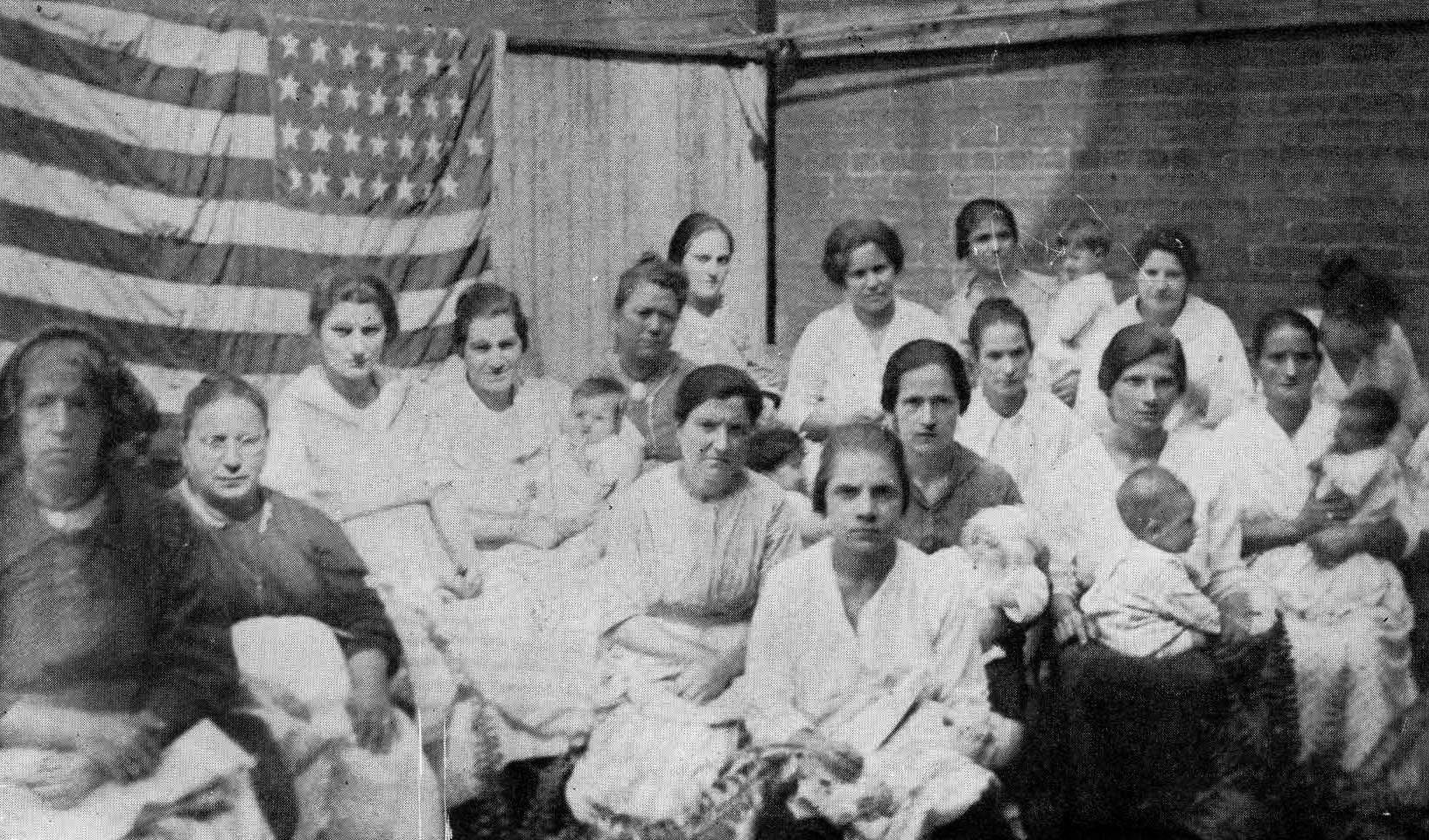 With the acquisition of a small brick house in 1905, Santa Maria was able to expand its programming to include clubs such as the Mothers Club.

By 1905 the Sisters were able to acquire a small brick house on West 7th Street. They had been in their new home but a day when the first applicants appeared, asking to live there. The acquisition of this building allowed Santa Maria to begin expanding its programs. Activities included a nursery for infants and small children, a kindergarten, sending the resident girls off to school, and running the domestic science department that included sewing, dressmaking, millinery and cooking classes. They also sponsored clubs for the girls and their mothers, clubs for boys, and night school. In addition, a steady stream of people came to the door applying for help, advice, employment, and a home. That same year, when the city organized Juvenile Court, Santa Maria was invited to attend the initial meeting. To assist the court, Santa Maria formed a Juvenile Court Committee of volunteers. Later S. Blandina was appointed a probation officer by the judge.

As the work expanded so did the need for space. In 1912 Santa Maria purchased a building on West 8th Street that eventually expanded into four adjacent properties allowing for a burgeoning list of programs and activities. Another 15 years would pass before they were able to move to even larger quarters, this time to 13th and Republic streets in 1926. Besides those services  already mentioned, the Center sponsored an employment bureau, Boy and Girl Scout Troops, a milk station, Americanization classes, and classes in Italian, English, Braille, singing, and dramatics. Their work also included an exhaustive record of home visits that included the distribution of food, clothing and books.

As the Sisters and their co-workers visited the jails and hospital charity wards, S. Blandina became involved in the issue of human trafficking. When she encountered a young woman who had been trafficked, the intrepid Sister confronted the madam who operated the house of prostitution. Her action spurred others to take up the issue, including the Federation of (Cincinnati) Catholic Women’s Societies, who held their meetings at Santa Maria. In her book celebrating the 25th anniversary of Santa Maria, Anna Minogue observed, “There is not in Cincinnati any organization that has expended stronger efforts for the overthrow of commercialized vice than the Santa Maria Institute.” 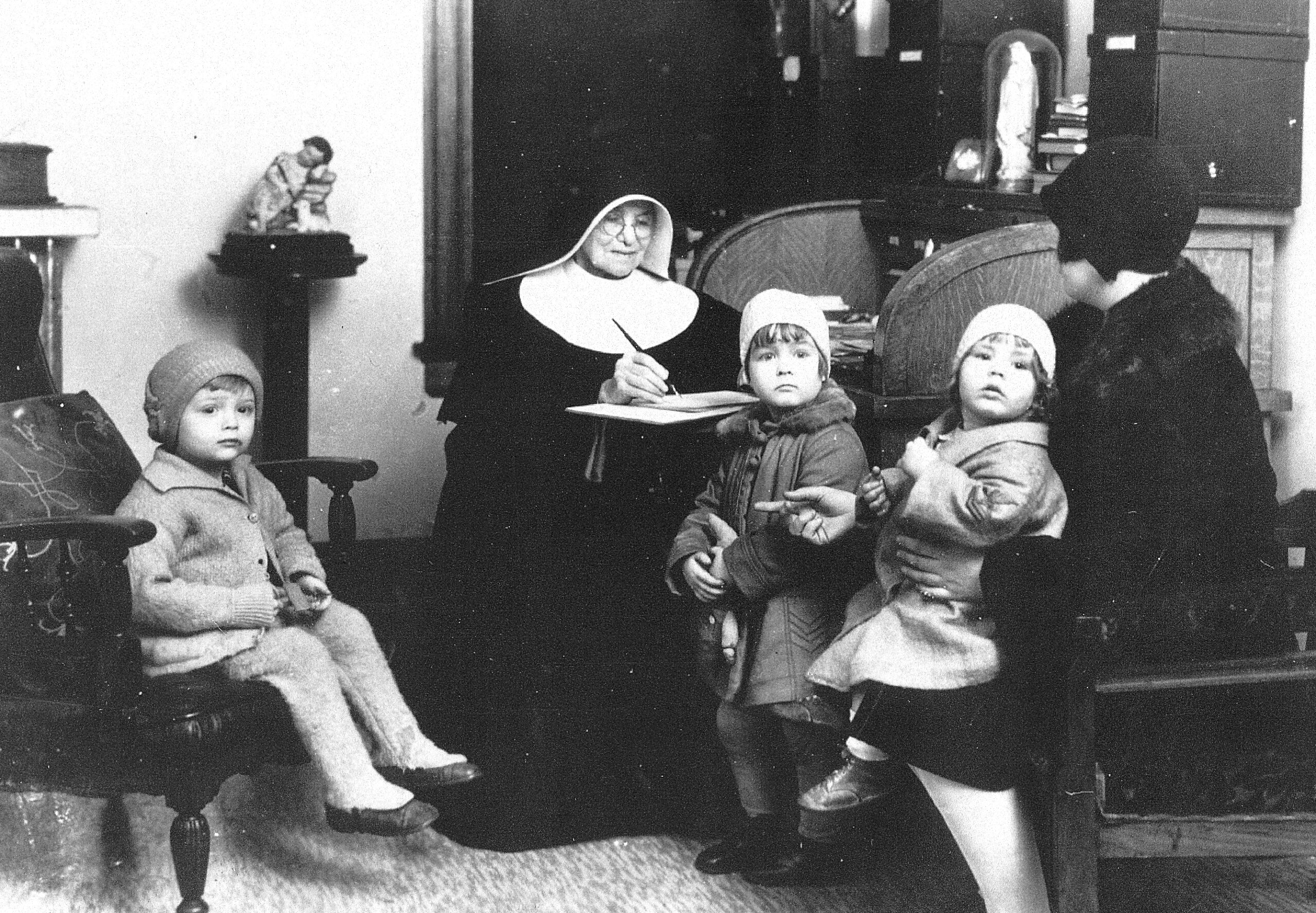 As their work grew the Sisters kept abreast of the latest trends in social work. They kept meticulous records, trained social workers at Santa Maria, and collaborated with other agencies serving the poor. In 1916 Santa Maria became a charter member of the Council of Social Agencies, now United Way of Greater Cincinnati. In that same year the Bureau of Catholic Charities, of which Santa Maria was a key member, was established by the Archdiocese of Cincinnati.

As the immigrant communities spread from downtown, Protestant proselytizers became particularly active among Italians who settled in Walnut Hills. In response the Sisters visited the neighborhood every Sunday for years to gather the children for Sunday school and Mass at the Church of the Assumption. Eventually they opened a neighborhood center that was instantly popular with families in the area. In 1919 this facility became the Kenton Welfare Center, an organization independent from Santa Maria.

Likewise, in Fairmount, on the near west side of Cincinnati, an Italian community had gathered. The Sisters first visited the area in 1906, urging the Italians to attend nearby St. Bonaventure Church. They continued their work in the neighborhood, and by 1917 Sisters and volunteers from Santa Maria were making home visits, teaching catechism classes, and preparing children for First Communion. In 1922 the San Antonio Welfare Center officially opened as a location for social, educational, and religious activities. Mass was said regularly at the center; soon the peoples’ focus shifted from welfare activities to establishing an Italian parish, San Antonio di Padova. 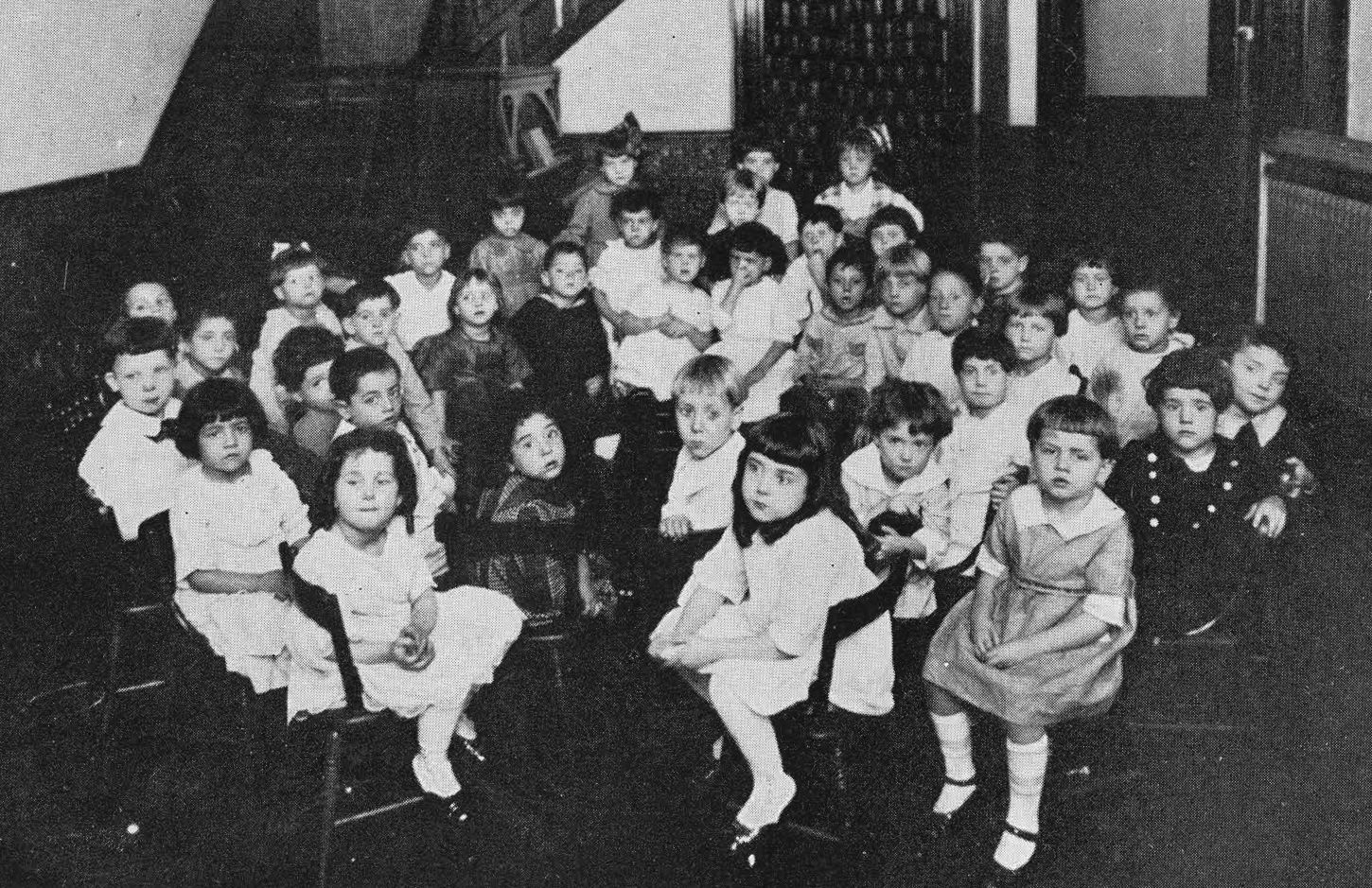 After is expansion in 1905 the organization was able to provide a nursery for infants and small children.

As the work of Santa Maria proceeded into the 1920s, Sisters Justina and Blandina founded Veritas, a magazine devoted to Catholic news and educational matters. Each of the Sisters often contributed articles, writing in both Italian and English. In addition, S. Justina kept a comprehensive record of the work of Santa Maria from its beginning until her sudden death in 1929. Her 22 journals and scrapbooks contain a narrative of the work of Santa Maria and also include annual reports, news clippings and other items of interest. S. Blandina continued her work at Santa Maria until 1933 when she retired to her Mount St. Joseph Motherhouse. For more than 35 years these two Sisters built a strong foundation and a legacy that was handed on to future generations who proved to be equally dedicated to the work of Santa Maria.