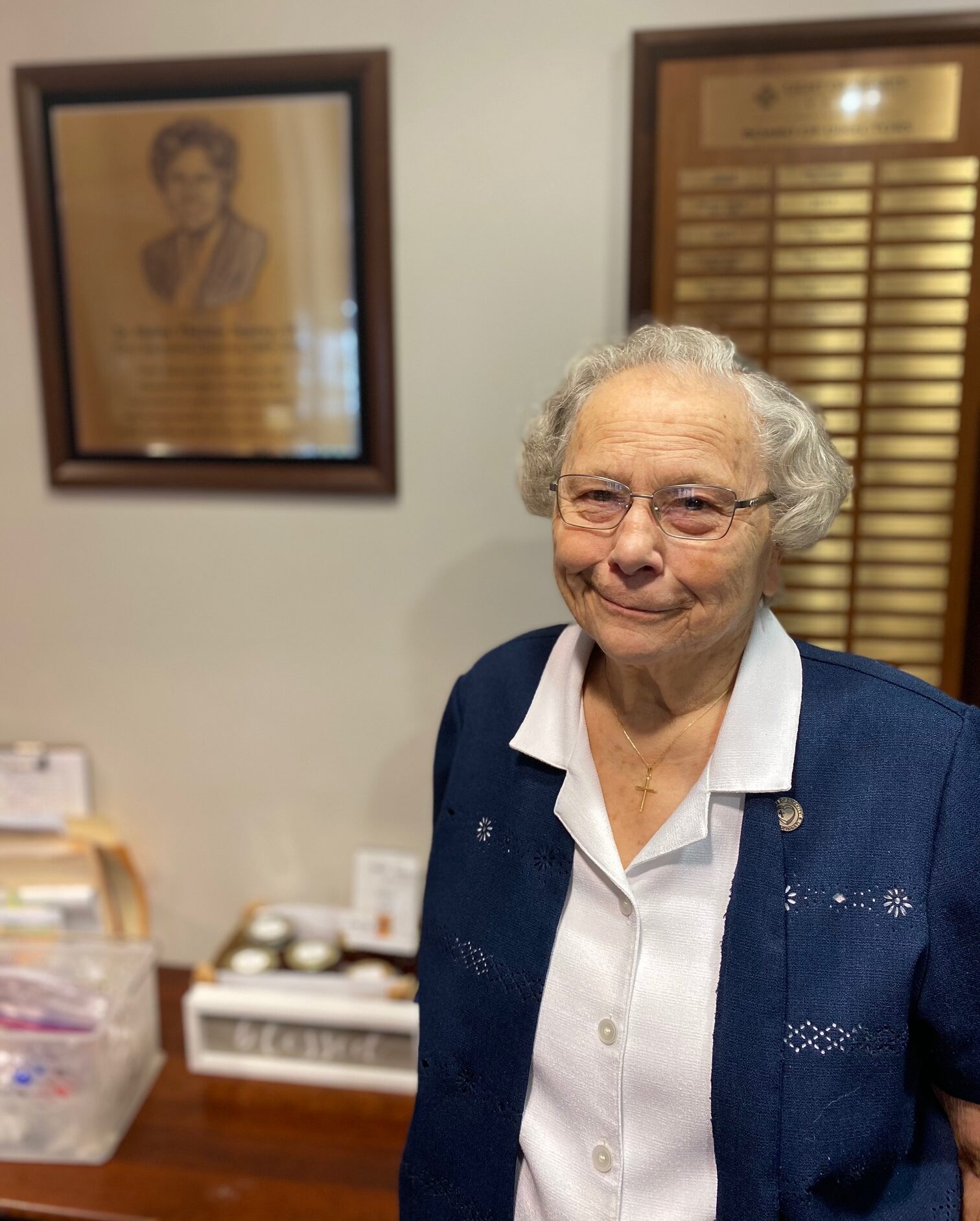 A common saying among the various congregations of Sisters and Daughters of Charity, derived from St. Vincent de Paul, is that we are to be “inventive to infinity” as we strive to respond to the emerging needs we see around us. At Light of Hearts Villa in Bedford, Ohio, Sisters Helen Therese Scasny, Anita Maroun and Regina Kusnir and many other Sisters of Charity have lived St. Vincent’s call for more than 35 years.*

In the mid-1980s, it was becoming obvious that the Sisters’ all-girls high school, Lumen Cordium, was facing the prospect of declining enrollment. There were 25 other Catholic high schools in Cleveland, the final members of the Baby Boom generation were being replaced by a much smaller age cohort, and the local all-boys Catholic high school had recently become coeducational. S. Anita, the principal of Lumen Cordium, and the other Sisters looked for a new unmet need. And thus Light of Hearts Villa was born.

Changing a high school into a free-standing assisted living facility – the first one in Ohio at the time – truly required “inventiveness to infinity.” Sisters Helen Therese and Regina were in charge of coordinating the transformation: dividing the classrooms into apartments, raising funding, and getting a license from state officials who kept seeing Light of Hearts Villa as a nursing home rather than as a home for the well elderly. They sold all the school’s furnishings and equipment to pay the contractors, and got three-year loans from several religious congregations – and paid them back within the first three years of the Villa’s operation. They hired the same architect who had originally designed the building, and whose work won two design awards. In 1989 – two years after the high school had closed – Light of Hearts Villa was completed, nine months early and under budget. S. Helen Therese was the first executive director, a position she held for the next 20 years. S. Anita served as her assistant for part of this period, and has filled other roles since: “everything from receptionist, to liturgist, to providing legal services to the residents as a civil attorney” once she had completed her law degree.

In the following years, changes in religious life and in the larger health care field provided more opportunities to be inventive to infinity. In 2001, the Vincentian Sisters of Charity entered into a 50/50 partnership with the Sisters of Charity of St. Augustine so that, when the Villa residents needed more than assisted living, they could go to Regina Health Center for additional care. In 2004, after the Vincentian Sisters’ merger, the Sisters of Charity of Cincinnati assumed responsibility for the VSC half of the partnership. In 2015, the Villa was transferred to the Sisters of Charity Health System of Cleveland, sponsored by the Augustinian SCs. Since then, the Villa has added more services: it has doubled the capacity of its memory care unit while still serving its original mission of independent living, assisted living, and respite care. A key element of this mission is that no one is ever made to leave because they can no longer pay: any resident who runs out of funds and enrolls in Medicaid can still stay at the Villa. As many as 30 percent of the residents have done this and yet, in more than 30 years, the Villa has never operated in the red.

An employee of Light of Hearts Villa for the last 16 years, S. Regina Kusnir (left) is inspired by the residents, whose median age is 89.

Our Sisters are still a vital presence at Light of Hearts Villa, and still “inventive to infinity” maintaining its mission. S. Regina has been there for 16 years, most of that time as director of pastoral and special ministries. In this role, she oversees the chapel and spiritual ministries. The Villa has always had at least one priest living there, who provides liturgy and the sacraments consistently – even during the most restrictive days of the COVID-19 pandemic. COVID restrictions truly required inventiveness: for example, Sister Regina created 10-minute Holy Week services in each of the Villa’s five hallways. Residents sat in the doorways of their rooms, reading portions of the day’s scriptures and praying together while S. Anita led the singing, as the priests went from place to place. These services continued until the chapel could be used again. S. Regina also oversees the Seton Safety Net, an activity of the Villa’s Community Outreach Department. This is a food closet for area seniors and also for staff if they are in need. The Seton Safety Net relies solely on donations of food and cash for grocery store gift cards. 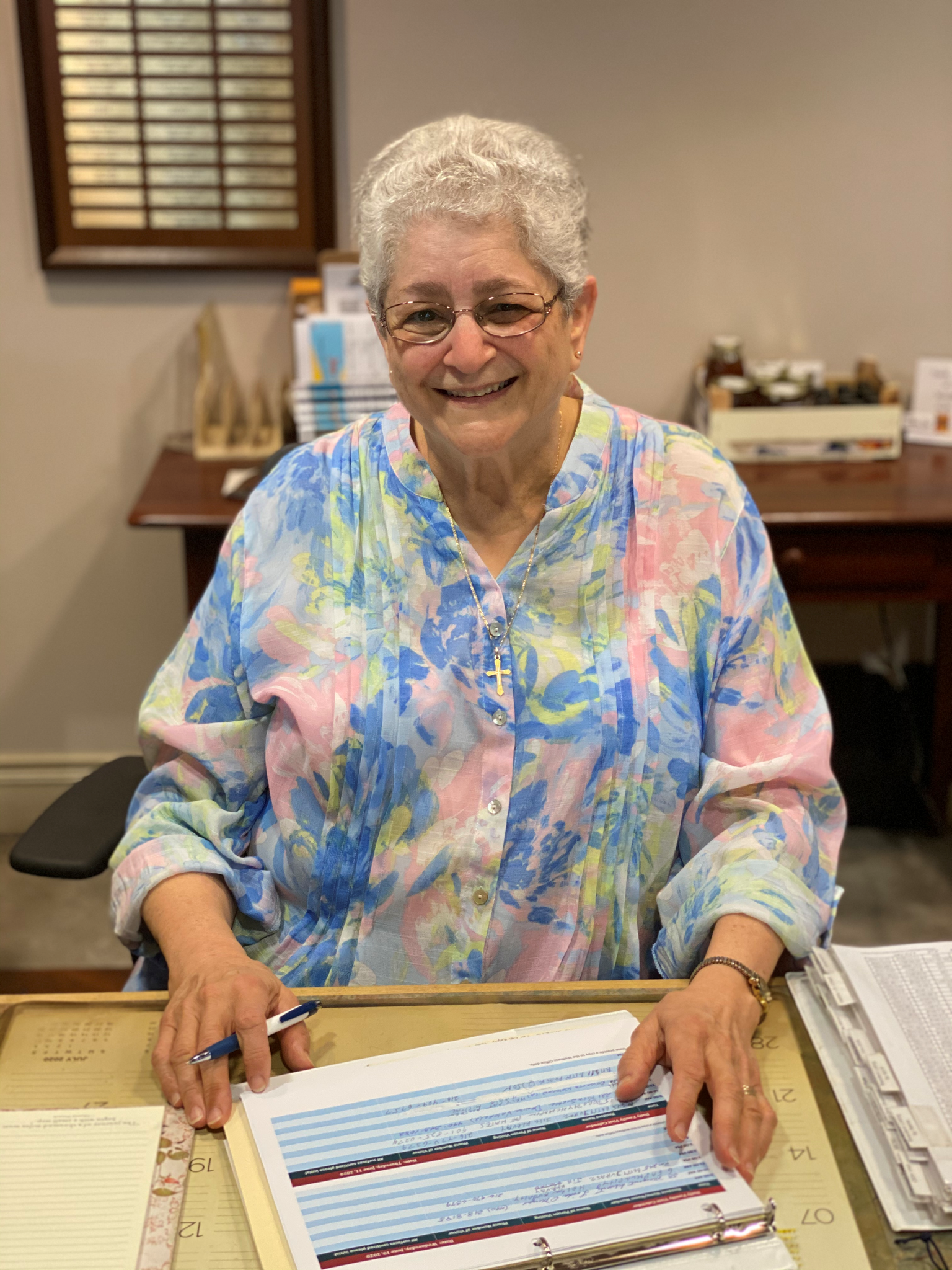 Through the years S. Anita Maroun has served in various capacities at Light of Hearts Villa, including receptionist, liturgist, and civil attorney.

The Villa’s Benevolent Fund always needs additional money in order to cover the expenses that Medicaid does not. Another opportunity for inventiveness to infinity – this one undertaken by S. Helen Therese’s Gift Shop and flea market. Residents and other people donate items that are sold on an honor system – there is no cash register, and people pay what they can. Prior to COVID, the gift shop had raised $20,000 for the Villa’s Benevolent Fund. Anything that is not bought is sent to nonprofits who provide homes for homeless men and women who have been discharged from hospitals. S. Helen still volunteers at the Gift Shop several times a week, as do numerous alumnae from Lumen Cordium High School, who still have a strong connection with the Villa and support it in various ways.

When asked what inspires them about Light of Hearts Villa, S. Helen Therese said, “I love doing this because the residents have experienced hard times in their lives. They are religious and love their faith. I believe they should have the best care. We should respect them, love them, and help them in their journey towards God.” S. Regina is inspired by the residents, whose median age is 89 – several are more than 100. She says they take their mission of praying for the world seriously. She loves doing Bible Study with them, even or especially those in the Memory Care Units, because “Faith is rooted in the heart, not in the brain.” S. Anita mentioned the staff, which she calls amazing – over half have been at the Villa for many years and are a community of people who care for each other. She cited an instance when a staff member’s son was severely injured: the rest of the staff donated 150 hours of their own sick leave and vacation time so that she could remain in the hospital with him. And every day at 11 a.m. they stopped for a minute of prayer for the boy.

The Sisters, the staff, and the residents of Light of Hearts Villa truly live the mission of the Vincentian and Sisters of Charity tradition to “make God’s love visible” in their ministry. And in the past 33 years, their “inventiveness to infinity” is a key reason why!