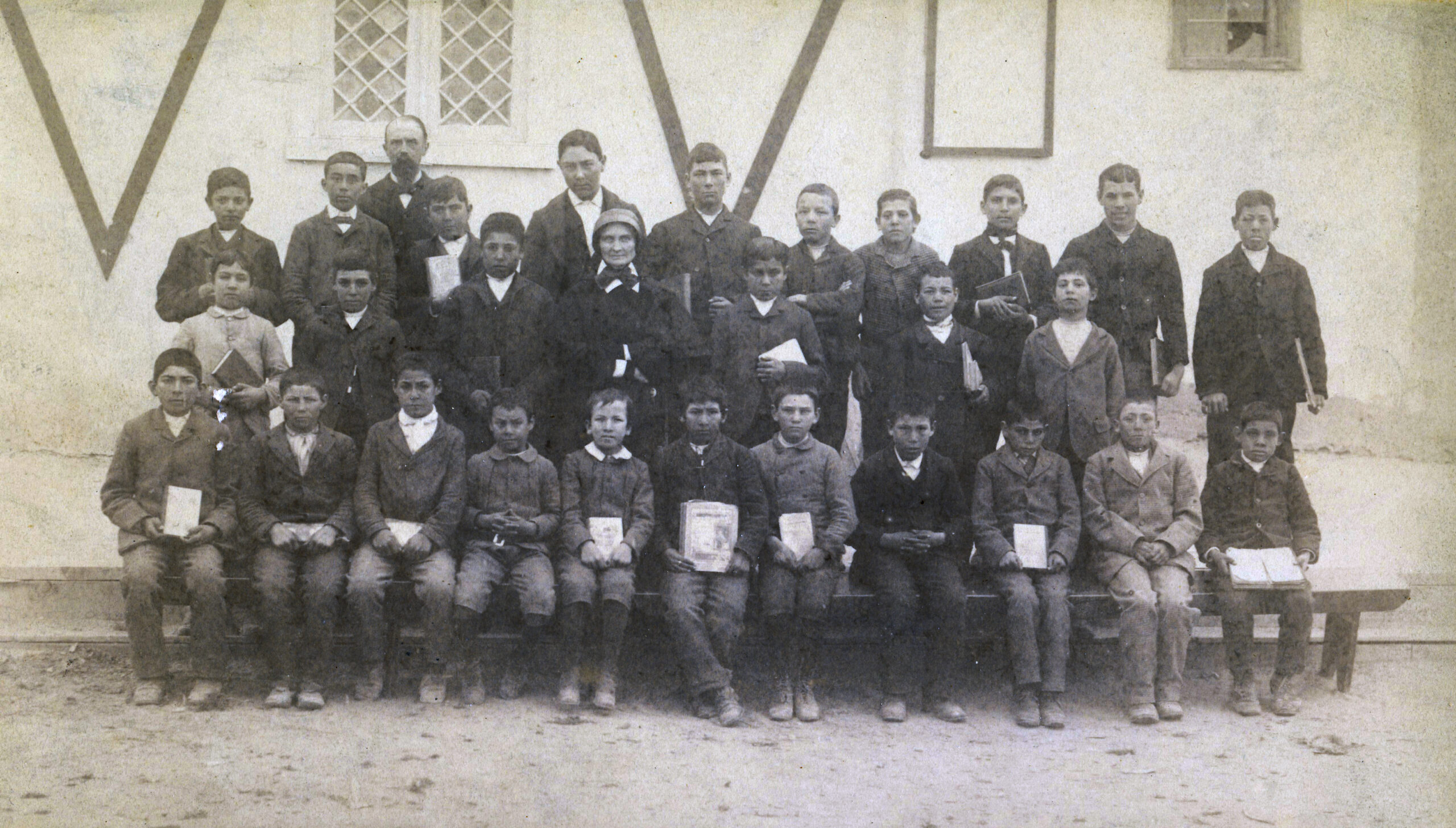 The Sisters of Charity join the faculty, staff, and 170 students of San Felipe de Neri School in Old Town, Albuquerque, in celebrating the 140th anniversary of the school’s founding. A “timeless treasure” of the founding days in our Archives, is a sepia photograph of S. Pauline Leo with her class of young boys.

An Irish immigrant, S. Pauline joined the Sisters of Charity of Cincinnati in 1854. Small in stature and of quiet demeanor, she is described as having a “sweet and simple approach to her ministry.” This young Sister was one of the pioneers who opened St. Vincent’s, Santa Fe, in 1865. Here she taught the youngest students and cared for the orphans who lovingly called her “Hermana Pablita.” Along with S. Blandina Segale, S. Pauline was named to open the new mission at San Felipe de Neri in Albuquerque in 1881. Their initial task was to assess progress on the construction of the new convent, the first two-story adobe built in Old Town (now Sister Blandina Convent). Next the two Sisters gathered pillows, mattresses and other necessities from the convent in Santa Fe to prepare the house for the arrival of the four additional Sisters assigned to staff the mission.

School opened Sept. 21, 1881. Our Lady of the Angels Public School #1 occupied a building the Jesuits had constructed several years earlier on Romero Street. Receiving $12 per month pay from the school board, the Sisters taught elementary and intermediate subjects for girls and boys. The curriculum included religion, reading, writing, arithmetic, English and Spanish for all students, with history and geography added for the intermediate learners. In addition, a select school for girls opened in five classrooms on the first floor of the convent that was adjacent to and connected to Our Lady of the Angels. Here students paid tuition for private lessons in painting, drawing, wax work, and piano. From their inception, the school served Hispanic and Native American students as well as “American young ladies of all denominations.”

One student from the early 1900s recalled how “S. Mary Nolasco Brazan-Sanchez and S. Renetta Hughes were regular mothers to us. They were concerned about us getting enough to eat and that we were dressed right.” Another recalled that the Sisters rang two bells at the end of lunch hour, the first was a five-minute warning, “by the second bell,” he said, “you had better be standing in your line, in your assigned place, ready to march into class…. The military wasn’t better at formations than we were.”

The spirit of care and concern for the students along with a firm commitment to offering a good education that prepared them to move forward well prepared for their future continued under the Sisters’ guidance through most of the 20th century. They formed strong bonds with the students and families of San Felipe as they continued the work of those who arrived in 1881.