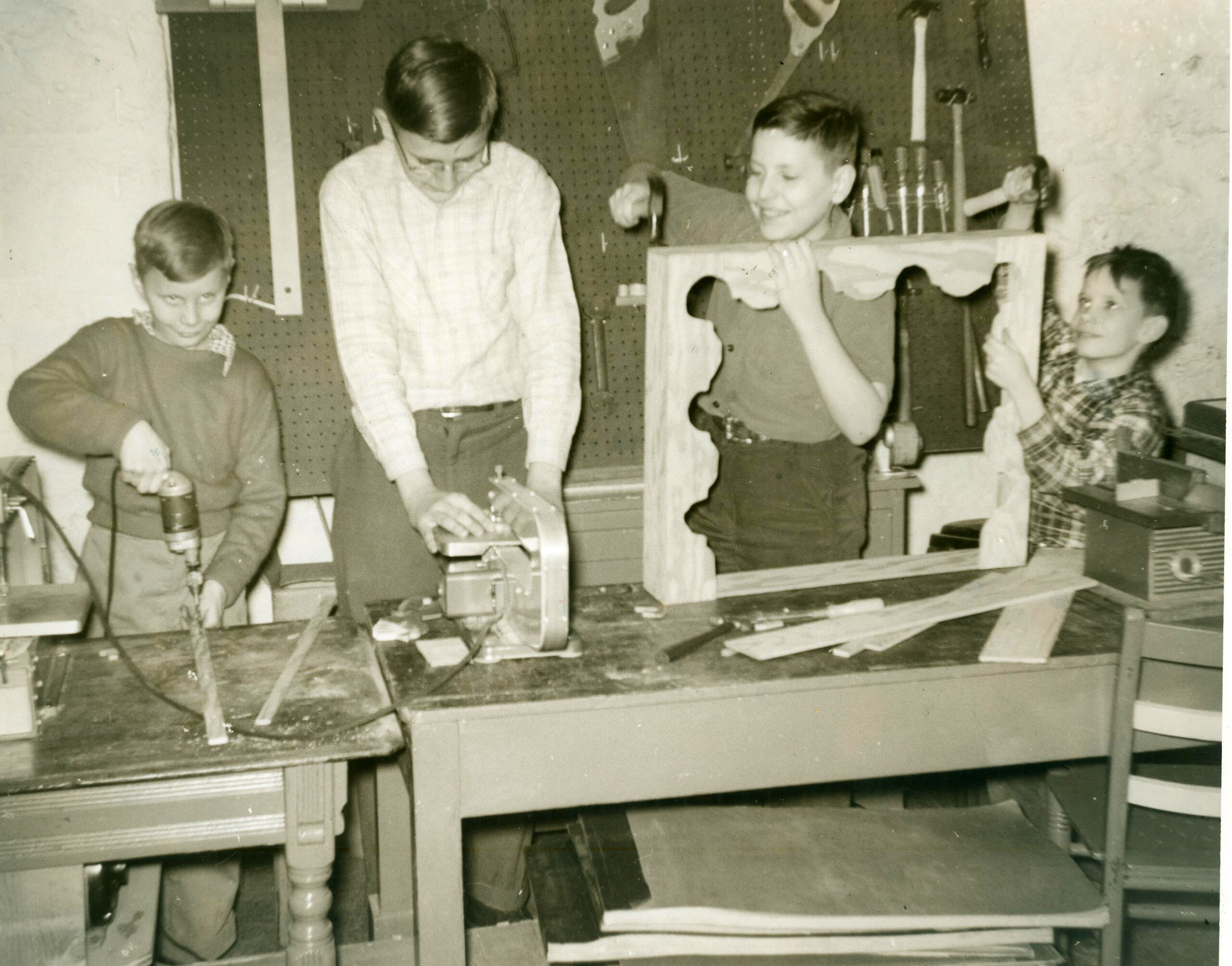 Wood working, metal craft, and sports activities were available programs for boys at Santa Maria during the 1950s.

As Santa Maria moved into the 1930s, those who succeeded Sisters Justina and Blandina Segale built on a strong foundation with a mission to serve those in need regardless of religion, nationality, or ethnicity. Their ministry, grounded in strong faith and reliance on God, was located at 13th and Republic streets where it served as a symbol of stability, security, and compassion in its Over-the-Rhine neighborhood. The center offered a full line of programs serving its clientele from infancy to old age delivered by a small cadre of Sisters of Charity augmented by a professionally trained staff, and a strong complement of generous volunteers.

In 1933, when S. Mary Kevin Keane was named director, she upgraded the equipment, furnishings, and program of Santo Bambino Day Nursery. The doors of Santa Maria opened each weekday at 6:30 a.m. when the Sisters and staff welcomed smiling, crying, and squirming tots as young as 18 months who settled in under the watchful eye of their caretakers. Free play and organized activities such as song, rhythmic dance and posture work filled their schedule. A snack break and dinner were included in the program along with a period of rest in the early afternoon. The 5 year olds attended kindergarten from 9 a.m. until noon where they had a catechism lesson and activities that encouraged the development of their social and physical skills.

Attendance at the day care center, using a graduated fee scale based on a family’s ability to pay, fluctuated according to economic and social conditions. During the Great Depression attendance was as low as 17; a decade later, when many mothers worked in defense plants and offices, 118 children were enrolled. The war-time increases were also due to an influx of families from Kentucky and Tennessee seeking employment in war production industries. Both the day care center and the kindergarten continued to serve many families in the post-war decades while the staff grew to include a doctor and a registered nurse.

Exemplary of the dedication of staff, S. Maria Caritas Condon who served at Santa Maria from 1948-’56, was lauded by Msgr. Marcellus Wagner, director of Catholic Charities, as “the best social worker we ever had.” One Santa Maria mother wrote: “Please make special note of Sister Maria Caritas. We became acquainted with her in 1951 when my two younger children stayed at Santa Maria Day Nursery. She looked after us and helped us as though we were truly family,” securing food, clothing, and financial assistance. “Each year the children ask if they can’t go back to visit,” she said, “and each time they see a Sister on the street they say, ‘There’s one of our Sisters.’” 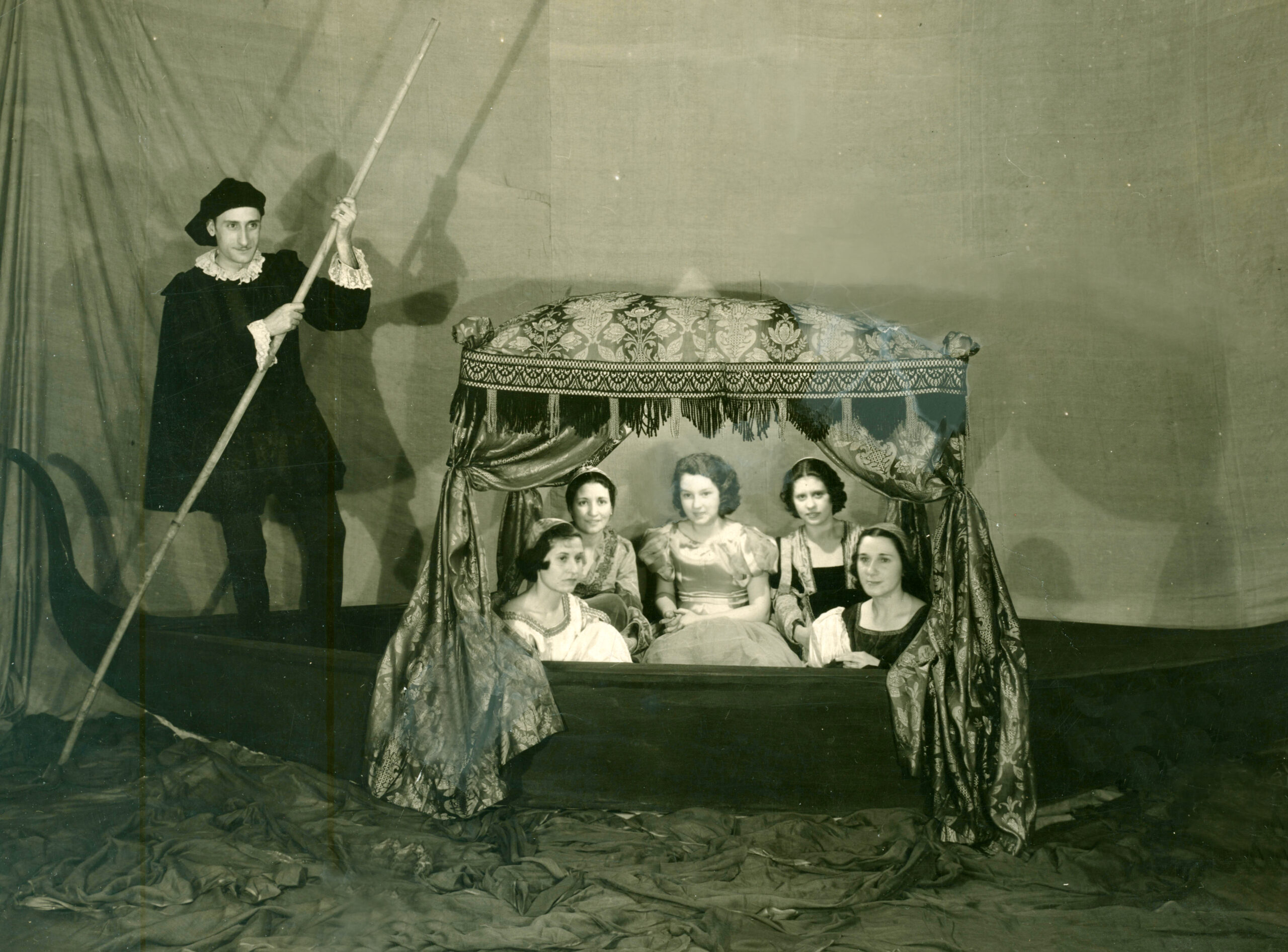 Dramatic arts was another after-school opportunity available to the children at Santa Maria.

Those who benefitted from Santa Maria’s programs did not forget. A former participant, living in Milford, Ohio, in the 1950s, wrote to the Cincinnati Post of a boy from Santa Maria who needed a bicycle in order to attend a trade school in another part of town. She was sure if the need was known assistance would be offered. The very day the article appeared a bicycle was on hand for the boy!

On any given day, while the preschool and kindergarten programs were in full swing, hundreds of children from 17 area schools poured into Santa Maria for after-school activities. Boy and Girl Scout Troops, averaging about 100 participants, met weekly, while classes for girls were available in sewing, embroidery, knitting, and crocheting. Santa Maria provided the materials while the children kept what they made. The youngest girls met in a “Little Women’s Club,” while the older ones could participate in home-making, child care and cooking arts. Wood working, metal craft, and sports activities were available for boys. For anyone interested, arts and crafts, glee club, dramatic arts, plastic work, and typing lessons were available. Most of these offerings continued to be available through Santa Maria’s summer programs.

Of course, none of this could have been available without an extensive corps of hundreds of volunteers. These included many local women; religious brothers from several communities who taught woodworking and shop skills; College of Mount St. Joseph students who directed group activities; College of Music students who taught class piano; Sodalists from Xavier University who taught other instruments; and many high school volunteers, most notably from Seton High School whose students have contributed their services to Santa Maria for many decades, and continue to do so. Volunteers were always on hand to donate to and assemble Christmas baskets of food, clothing, and toys for the Santa Maria families.

Outstanding among these was Mrs. Evelyn Maloney who, from 1951-1966, made ballet, square dancing and singing available to hundreds of young people at Santa Maria. Devoted to her profession as a dancer, Mrs. Maloney took deep satisfaction in instilling an appreciation for beauty and grace in the children. Each spring this dedicated teacher found herself knee-deep in satin, tulle, net, and sequins as costumes were created for the annual song and dance recital that gave excited students the opportunity to display their artistry. For her part, Mrs. Maloney considered each child “part of her family,” and found “much happiness” in her work. 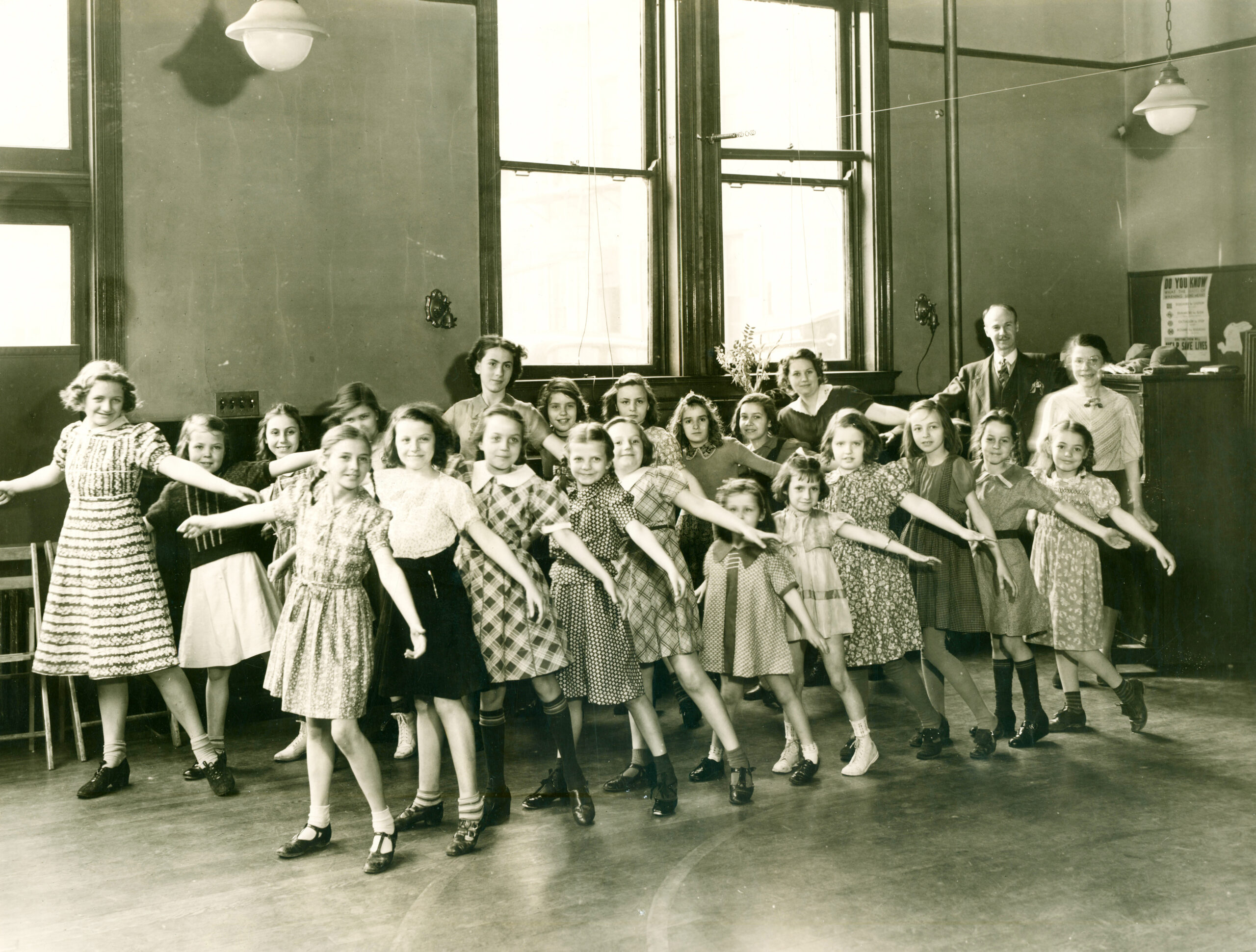 Evenings at Santa Maria were reserved for adult programs. The “Americanization” or “Citizenship” classes grew in importance with enrollment burgeoning during the World War II years. Michael Digerolamo, a social worker and teacher for many years, noted that about 85 percent of the people taking the class were illiterate in English. “So,” he said, “teaching citizenship involved not only history and civics, but also reading and writing.” Continuing S. Blandina’s emphasis, participants were encouraged to preserve their own culture, but add American ideals to them. A mother’s study and discussion club, Cana conferences, and social clubs were offered as well as a placement division and assistance with legal matters. The “Oldsters” club for those over 65 met one afternoon each week for a meal, games, and a social. Members were thrilled when Sisters Elise Halloran and Agnes Celestia Schaumleffel from Mount St. Joseph provided joyful holiday music at one of their Christmas dinners.

In addition to their scheduled programs, Santa Maria’s social workers offered guidance, consultation, and assistance to many individuals and families either in their offices or as part of an extensive program of home visits. During the summer Sisters of Charity, on break from teaching, were available to accompany them. The agency also offered low-income housing opportunities on the upper floors of their building. Several Sisters along with a staff of about a dozen professionals managed the organization.

From its founding Santa Maria experienced financial insecurity. When the agency became a member of Community Chest (later United Way) in 1916 it gained a degree of financial stability, but it also had a core of dedicated supporters. The Society of Willing Workers was an ongoing booster of the Institute’s efforts, and by the 1930s many of the Italian families who earlier received assistance became donors and volunteers. Their “Italian Club” sponsored a semi-annual Ravioli and Spaghetti Dinner, a colorful social event drawing close to a thousand people. Santa Maria Guild, founded in 1951 by wives of the Institute’s Board, was another source of assistance. Eventually growing to more than 200 members, these women sponsored annual garden fetes and clam bakes, with proceeds going to purchase equipment and supplies for the programs, as well as to maintain the facilities.

In 1966, at the request of Community Chest, Santa Maria expanded its services to include the Southern Appalachian community in Lower Price Hill. While some programs remained at 13th and Republic streets, the after-school program was phased out. A new center in Lower Price Hill opened in a two-room storefront, but a year later moved to St. Michael Street, and soon opened an outreach office on Warsaw Avenue in East Price Hill. Changing its name to Santa Maria Neighborhood House, the agency directed its resources to projects such as the Lower Price Hill Community School, a Youth Service Bureau, a community health board, nonprofit housing corporations, a mother’s club, and tutoring. At the same time, social workers maintained a large volume of case work. 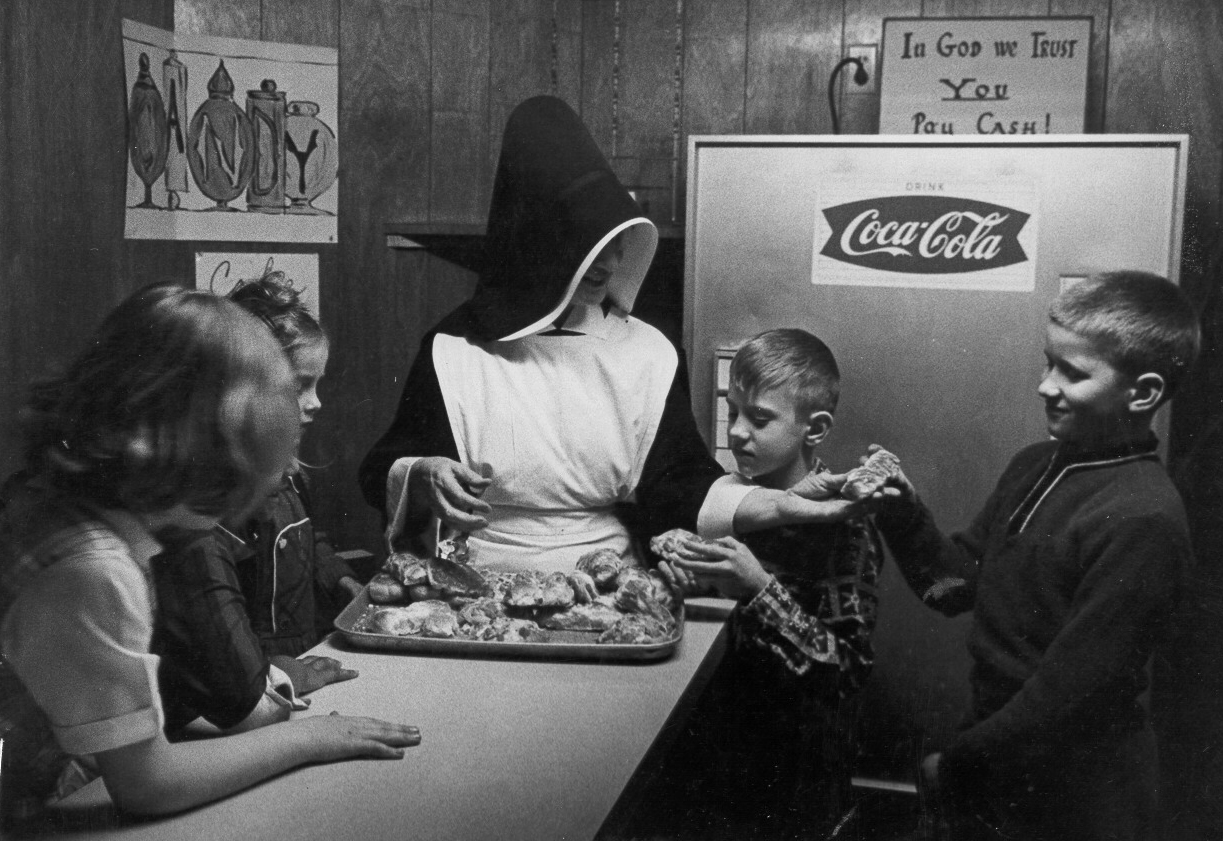 Ludmilla Hartman ministered at Santa Maria for more than 20 years and became known as the “Doughnut Sister,” for always having an unlimited supply of the children’s favorite treat.

S. Ludmilla Hartman was a staple through the years of transition from Over-the-Rhine to Lower Price Hill. Beginning her work at Santa Maria in 1959, this creative and caring personality took charge of the Oldsters Club, Boy Scouts and Cub Scouts, arts and crafts, and “boys and girls of all ages.” When the children arrived for their after-school programs they always made a bee line for Sister. Somehow their activities were more enjoyable after their visit with the “Doughnut Sister” who seemed to have an unlimited supply of their favorite treat. When Santa Maria moved to Lower Price Hill, S. Ludmilla set up a scouting program and started a senior’s program called the “Get-Together-Club” that grew rapidly because she “always tried to take a personal interest in each one as they came to the door.” At their weekly meetings they were served a hot meal, which “for many would be the only hot one for a week.” Later they played cards or Bingo, and sang and danced along with S. Ludmilla who lovingly cared for each one of them. When she received a donation of equipment for a kitchen, she used it not only for their weekly meetings, but to teach Home Economics to teenagers from the area. Although she “officially retired” in 1980 at the age of 81, she continued to be involved with the “seniors” for another decade.

By the late 1960s Santa Maria had evolved into an agency that was increasingly independent of the Sisters of Charity. In 1972, it incorporated as Santa Maria Community Services independent of the Sisters of Charity. Governed by a Board of Directors, it was fully prepared to move into the next phase of its long and storied journey of assisting the neediest in Cincinnati.