The following article is a collaborative effort of S. Judith Metz and Christy Cauley, marketing and communications specialist at Santa Maria Community Services. 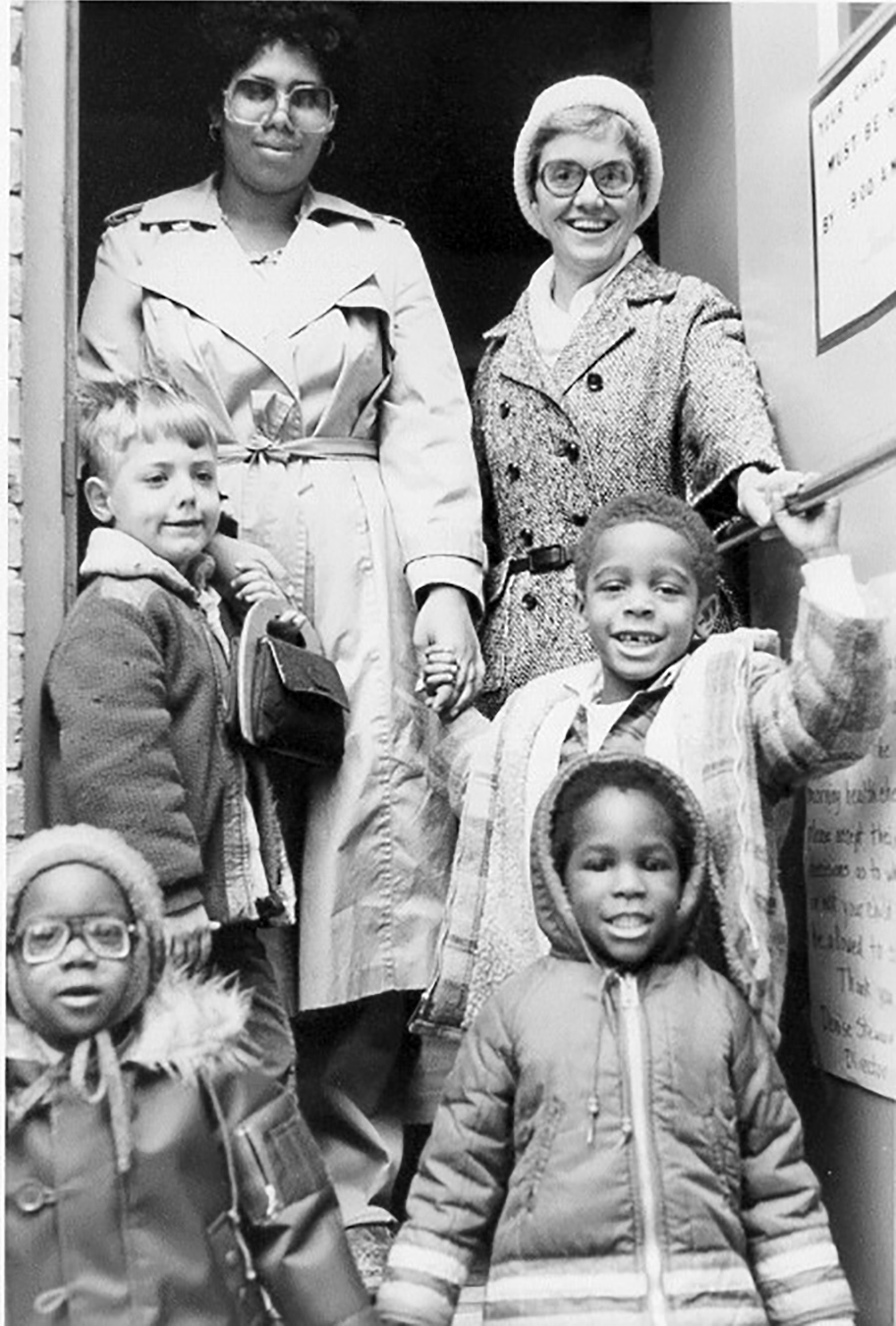 The several decades following the incorporation of Santa Maria Community Services in 1972 saw great growth. Programs underwent continual upgrading to meet the increasing demands for higher standards of care and new services. With its focus on a family-centered approach, the agency expanded its facilities and services into new locales, and by a decade later had a full-time staff of 50.

When Executive Director David Crowley left the agency in 1973, he was succeeded by Sister of Charity Jane Ellen Shappelle, who served in that position for the next 13 years with skill, enthusiasm, and strong leadership. While the 1970s saw expansion of government into the social service arena with grants and program support, many of these aids were reduced or removed during the1980s. Santa Maria’s board responded by developing a strategic plan for coping with cutbacks in federal funds that included the formation of a Development Board that was charged with establishing an endowment fund and sponsoring fundraising events. S. Jane Ellen was ably assisted in dealing with the changing climate by Program Director Steve Lange. His dedication, wealth of ideas, wide community involvement, and strong leadership set the tone for the development of many exciting initiatives. Another important staff member during this period was social worker/case manager S. Rosemary Clare Eagan who, with her gentle presence, supervised staff, counseled families and individuals, and assisted in emergencies. “I feel this is fulfilling the Gospel message to feed the hungry, clothe the naked, harbor the homeless,” she said. “I feel that I’m doing as Elizabeth Seton would have done and I find joy in my work.”

Santa Maria’s outreach encompassed every segment of the population from birth to old age. In the mid-1970s the agency merged with the Lower Price Hill Day Care Center that, a few years later, combined with the day care center from 13th and Republic streets when it moved to the Seton High School campus. In 1987, however, Santa Maria’s day care program was transferred to the YMCA ending 90 years of the agency’s day care ministry. As S. Jane Ellen explained, “There is a constant fluctuation of services as needs, populations, and locations shift. As one need is met, you move on to something more pressing.” 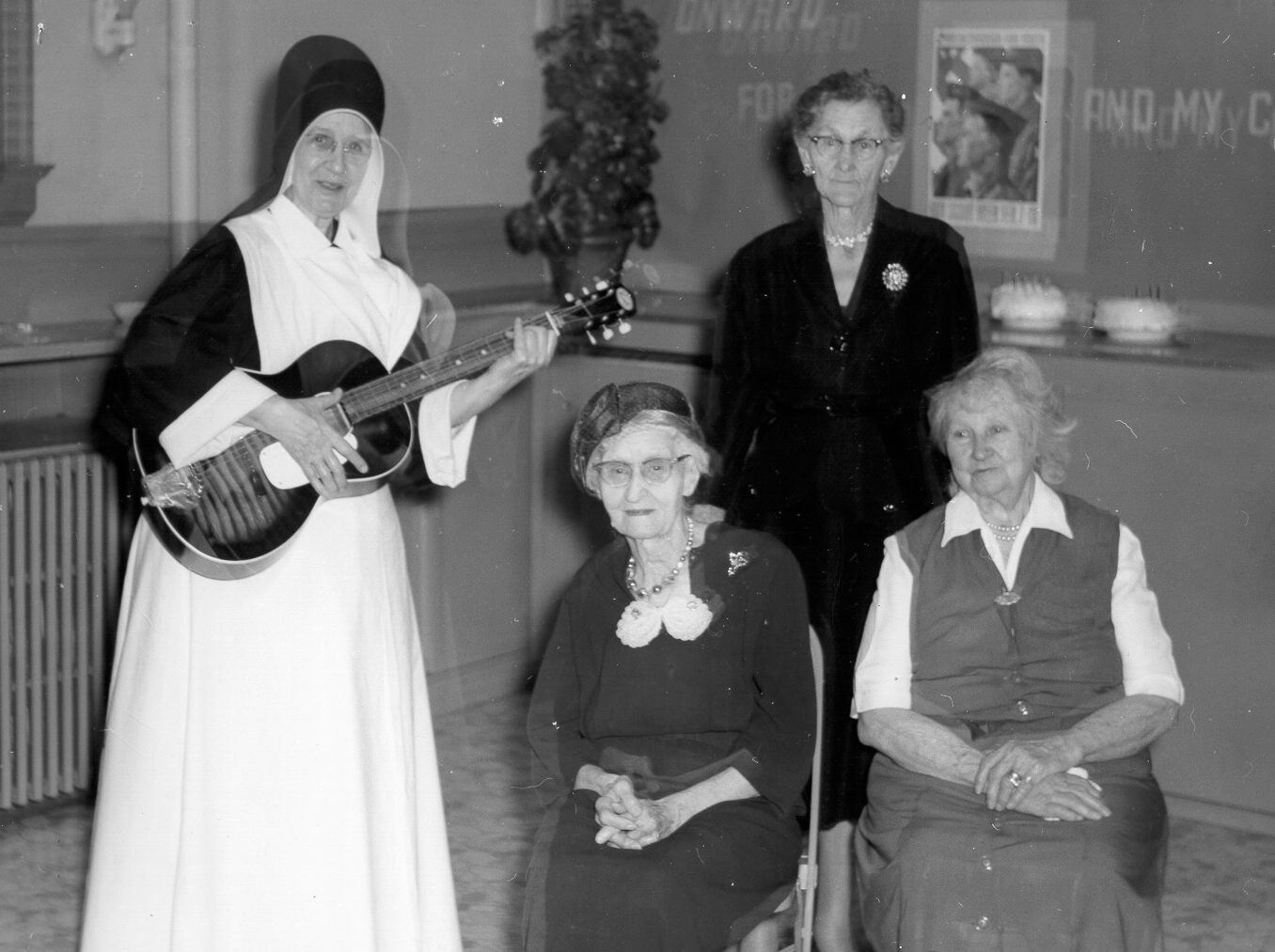 The backbone of the Santa Maria Neighborhood Centers was neighborhood organization programs in Lower Price Hill, East Price Hill, and later Sedamsville. In East Price Hill the youth program was active in employment efforts, beautifying the neighborhood, creating a recreation center, tutoring, and crisis intervention. A popular program during the 1970s and 1980s was the Police-Youth Weekend Campout that regularly attracted more than 100 boys each year. The Family Nurture Center on State Street in Lower Price Hill served as a safe space for “hanging out,” job placement services, child-birth classes, support groups, counseling, and GED classes.

Outreach services to the elderly that had been a staple of Santa Maria’s work since its founding continued. S. Ludmilla Hartman directed weekly gatherings that included a meal and social activities, while an ever-expanding Meals on Wheels program served many. S. Charlotte Mollenkopf provided outreach services to the elderly, invalids, the sick, the abandoned and the neglected. She described her work as “assisting them with everything from securing food stamps and bus tokens, to handling social security needs, to reading to those with failing eyesight.”

By the late 1980s Santa Maria was the largest neighborhood multi-service agency in Greater Cincinnati and was poised to continue its long tradition of providing services to every segment of the population in the areas it served. 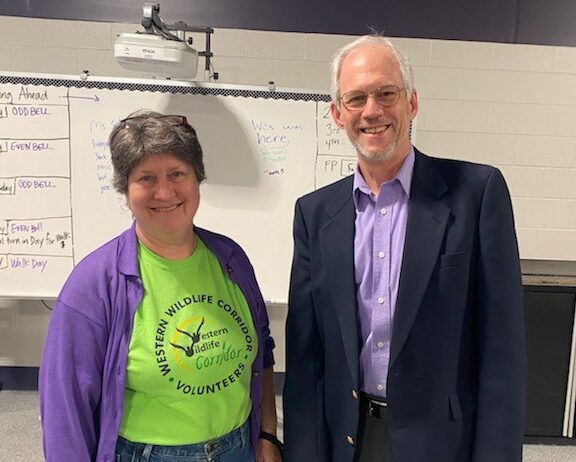 H.A. Musser, Jr. (with board volunteer Mary Ann Rozum) was named president and Chief Executive Officer of Santa Maria Community Services in 1989 and continues to hold the title today.

H.A. Musser, Jr. joined Santa Maria on June 18, 1984 as a planning specialist and soon became a neighborhood organizer, helping bring together Price Hill residents to discuss common issues and work toward solutions. He later became the Sedamsville center director, and in 1989 he became the president and Chief Executive Officer, a title he still holds today.

S. Blandina was known as the protector of children, especially immigrant children. Just before the dawning of the 21st century, Santa Maria partnered with the Every Child Succeeds Program providing intensive home visitation services to first-time parents, carrying on S. Blandina’s tradition of caring for the health and education of children. Santa Maria continues their partnership with Every Child Succeeds and has since added the Promoting Our Preschoolers program to prepare children ages 3 to 5 for kindergarten. 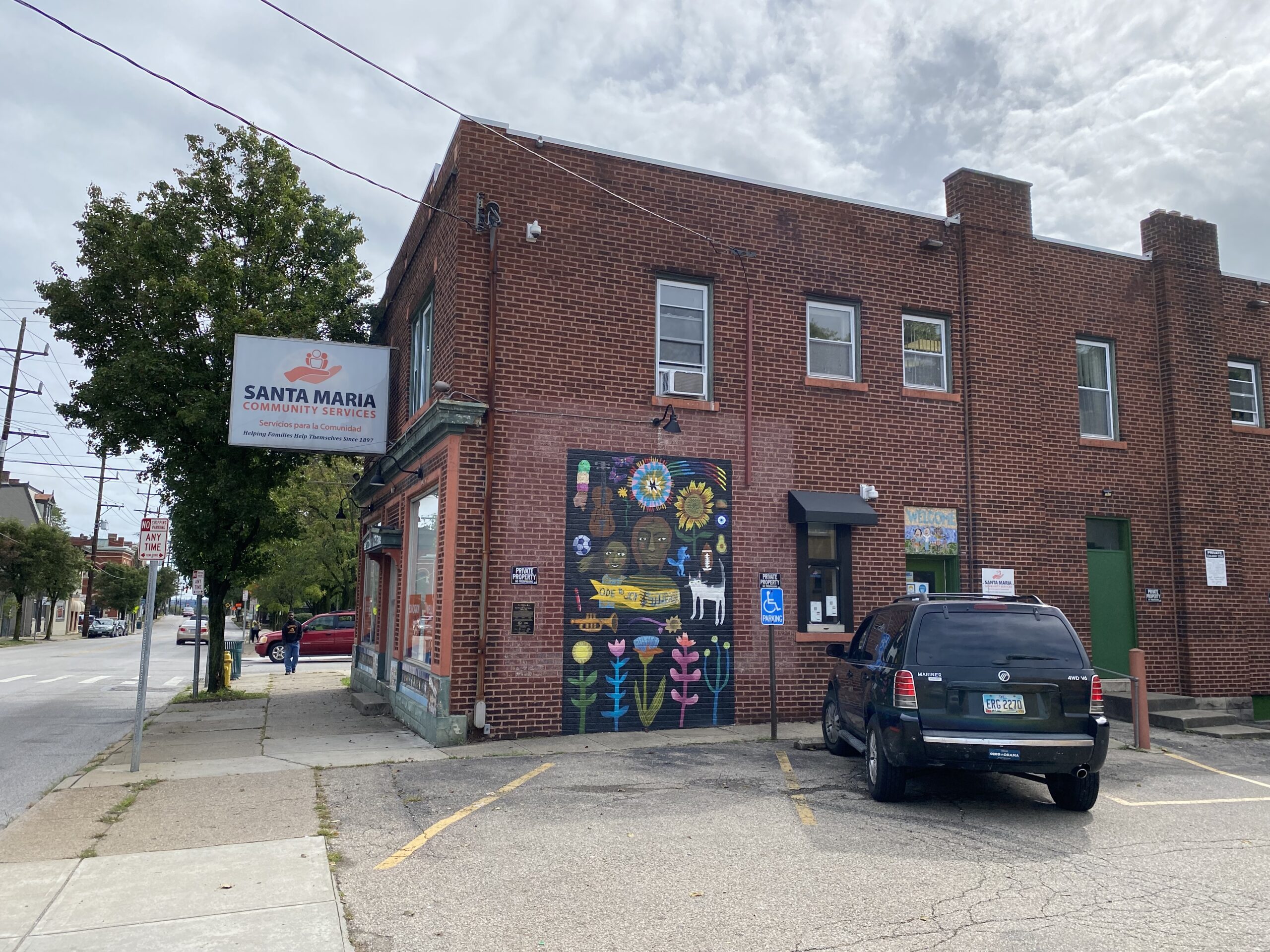 In 2009, Santa Maria opened the International Welcome Center to assist immigrants with adjusting to life in the Greater Cincinnati area through English as a Second Language classes and other programming.

The following year, The International Welcome Center opened to assist immigrants with adjusting to life in the Greater Cincinnati area through English as a Second Language classes and other programming. Just as Sisters Blandina and Justina once cared for Italian immigrants, Santa Maria continues immigrant outreach in Price Hill, welcoming immigrants from many different backgrounds.

The 2010s brought many new opportunities to serve families in Price Hill. In 2011, The Price Hill Financial Opportunity Center opened, offering financial coaching as well as workshops and classes. In the ensuing year, Literacy Center West merged with Santa Maria, offering GED preparation and job-readiness training at no cost.

In 2014, Santa Maria added the Project Advance AmeriCorps program, a national service program that provides full and part-time job opportunities. Participants work to serve their communities and meet social service needs. Santa Maria also received the Agency of the Year award that year from the Alliance for Immigrant Women/YWCA.

As part of their 100th anniversary celebration in 2015, The United Way recognized H.A. Musser, Jr. as one of their 100 United Way heroes. Santa Maria also received the Agency of the Year award from the National Association of Social Workers that same year. Additionally, Santa Maria partnered with Price Hill Will to develop the Homestead Program which provides homeownership opportunities through non-traditional lending methods. 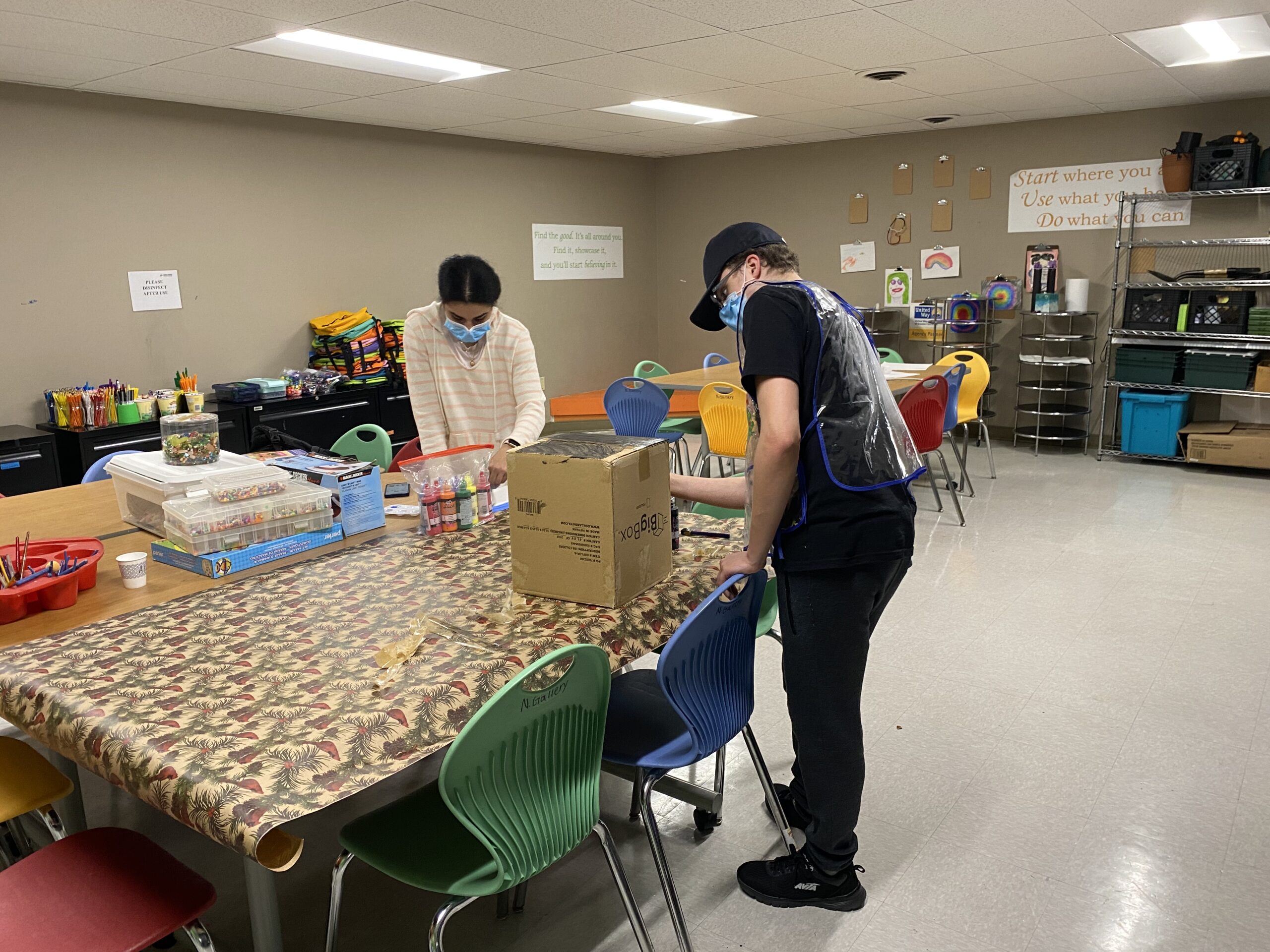 In 2016, Santa Maria established the Joe Williams Family Center to be the new home of its Youth Development program at 2312 Glenway Avenue in Lower Price Hill. The former Boys and Girls Club facility was provided by Community Matters and renovated through the Cincinnati Reds Community Fund’s 2016 “Community Makeover” in partnership with P&G, the Cincinnati Zoo and Botanical Garden and other partner agencies.

In 2018, Santa Maria added an annual fundraising event, The Sharing Table, a community dinner focused on raising awareness about childhood poverty in the region. It had to be canceled in 2020 and 2021 due to the COVID-19 pandemic, but returned in 2022 at Price Hill Will’s ARCO Cincy event venue.

During the pandemic, Santa Maria quickly pivoted to serve clients remotely where possible, switching to virtual classes, programs and fundraisers. Clients were serviced through porch drop-offs and videos, rather than in-person home visitors. During that time, Santa Maria provided almost 70,000 pounds of food, more than 2,000 bottles of hand sanitizer, and more than 5,000 masks. They also organized local vaccine distribution for hundreds of residents.

Most services are back to in-person, although Santa Maria still offers some classes and seminars online. Santa Maria proudly carries on Sisters Blandina and Justina’s vision by providing educational tools and resources to build strong families, promote healthy residents, and foster neighborhood revitalization. As S. Blandina is being considered for sainthood, her legacy lives on through Santa Maria’s work.