Sisters of Charity of Cincinnati Public Statement on Immigration

We, Sisters of Charity of Cincinnati, support the pastoral letter of Catholic Bishops of Mexico and the United States, Strangers Together on the Journey, which acknowledges that the current immigration system cries out for change.

We recognize the rights of all our immigrant/refugee sisters and brothers. We believe the resolution of immigration/refugee issues must be viewed through the lens of economic analysis. Therefore, we call for change in unjust immigration policies and unfair trade agreements by our nation, and we will continue our direct outreach to immigrants and refugees. (2007)

We, the social justice representatives of the Vincentian Family of North America, endorse and commit to promote the following principles* for Immigration Reform:

The tragedy of forced migration and displacement affects millions, and is fundamentally a crisis of humanity, calling for a response of solidarity, compassion, generosity and an immediate practical commitment of resources. Pope Francis, April 16, 2016

The International Organization for Migration defines human migration as the movement by people from one place to another with the intentions of settling, permanently or temporarily in a new location. A forced migrant is any person who migrates to escape persecution, conflict, repression, natural and human-made disasters, ecological degradation, or other situations that endanger their lives, freedom or livelihood.

According to the United Nations, every minute 24 people leave everything behind to escape war, persecution or terror. There are several types of forcibly displaced persons:

Refugees flee their home and country for fear of persecution because of their race, religion, nationality, membership in a particular social group, or political opinion. Many refugees are in exile to escape the effects of natural or human-made disasters. Common myths about refugees

Asylum Seekers flee their homes as refugees do, but their claim to refugee status is not yet definitively evaluated in the country to which they fled.

Internally Displaced Persons have not crossed an international border but have moved to a different region than the one they call home within their own country.

Stateless Persons do not have a recognized nationality and do not belong to any country. Statelessness situations are usually caused by discrimination against certain groups. Their lack of identification — a citizenship certificate — can exclude them from access to important government services, including health care, education or employment.

Returnees are former refugees who return to their own countries or regions of origin after time in exile. Returnees need continuous support and reintegration assistance to ensure that they can rebuild their lives at home.

Let us honor the strength, courage and perseverance of millions of our displaced sisters and brothers. Let us stand in solidarity with them.

According to Catholic Social Teaching, the Catholic Church proclaims that human life is sacred and that the dignity of the human person is the foundation of a moral vision for society. The Catholic tradition teaches that human dignity can be protected and a healthy community can be achieved only if human rights are protected.

It’s hypocrisy to call yourself a Christian and chase away a refugee or someone seeking help, someone who is hungry or thirsty, toss out someone who is in need of my help. If I say I am Christian, but do these things, I’m a hypocrite. Pope Francis, 201 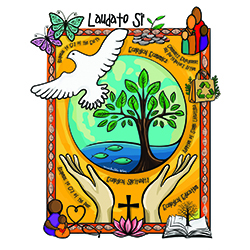 The Laudato Si’ Action Platform invites us to become a community of participatory action and advocacy, for the Earth and the poor. Did you know that the Sisters of Charity of Cincinnati have 14 people from other countries working at Mother Margaret Hall? In order to learn more about them, the countries they come from and how climate change is affecting their home countries, Sisters Jean Miller and Mary Ann Humbert are interviewing them. In this video we hear from Felicia, originally from Nigeria.