“God demands
first of all heart,
and then the work.”

Racism is the belief that characteristics and abilities can be attributed to people simply on the basis of their race and that some racial groups are superior to others. Racism and discriminination have been used as powerful weapons encouraging fear or hatred of others in times of conflict and war, and even during economic downturns. globalissues.org

“All human beings are born free and equal in dignity and rights. They are endowed with reason and conscience and should act towards one another in a spirit of brotherhood.” Article 1, Universal Declaration of Human Rights

“Racism is a sin: a sin that divides the human family, blots out the image of God among specific members of that family and violates the fundamental human dignity of those called to be children of the same Father.” Brothers and Sisters to Us, United States Conference of Catholic Bishops, 1979

“When the world is compelled to coin a new term to take account of increasingly widespread bigotry, that is a sad and troubling development. Such is the case with Islamophobia.” UN Secretary, General Kofi Annan

According to Catholic Social Teaching, we are one human family whatever our national, racial, ethnic, economic, and ideological differences. We are our brothers’ and sisters’ keepers, wherever they may be. Loving our neighbor has global dimensions in a shrinking world.

1. Don’t laugh at racist, sexist, ageist, homophobic and other stereotypical jokes or assumptions. By laughing, you’re acknowledging the joke is appropriate and encouraging more inappropriate comments. You can interrupt without being rude.

2. Don’t let your silence speak for you. Simply say, “I don’t find that funny,” or “I don’t appreciate jokes like that.” Make an effort to get to know people different than you. Look for things in common with other people and celebrate the differences. We can learn from and appreciate something about everyone.

4. Think before you speak. Words can hurt, whether you mean them to or not. When describing a person, think if mentioning their race is important to the story. Do you refer to everyone from South or Central America as Mexican? If you don’t know someone’s country of origin, don’t assume. Some people prefer Black, while others like African American. Some prefer Latino/a, others like Hispanic. If you’re unsure which to use, ask. It’s important to use the correct language.

5. Be a role model. Be vocal in opposing discriminatory views and practices, especially with friends and family who respect your opinion. Don’t criticize, but help educate others about issues and about your own experiences.

6. Don’t make assumptions. Do you assume that African Americans like rap music or that Asians are good at math? Stereotypes hurt everyone. Examine what your prejudices are and make adjustments to look at everyone as an individual.

7. Work on projects with members of groups different from your own. Working as an equal alongside others from different groups on a common project is one of the best ways to undo prejudice and increase familiarity with others.

8. Explore the unfamiliar. Attend an organization meeting, religious service or travel to a new region where you are in the minority. For example, if you are Christian attend a Jewish service at a synagogue. If you attend an all white suburban school visit an inner-city multi-cultural school. This first-hand experience can be enlightening and give you perspective.

9. Be a proactive parent. Expose your children to diversity at a young age. Read stories that explain the point of view of other groups. Discuss TV shows, movies or books that present stereotypes. Children can benefit from knowing other children from different groups at very early ages, before prejudices and biases are formed.

10. Support anti-prejudice and anti-racist organizations. Whether your efforts are in volunteering, financial donation or being an advocate, working with other groups toward the same goal can be beneficial to you and the community. You’ll meet great people and find real support for your efforts. By getting involved, your voice can make a big difference at the local level.

Open Wide Our Hearts the Enduring Call to Love: A Pastoral Letter Against Racism

Powerful Videos:
The Story of Race
The Danger of a Single Story

SCHEMA
“White Racism in the United States: A Schematic Presentation of its Components” by Harry Cook 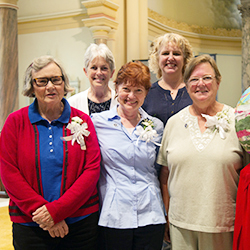 Branching out to others for the sake of service has always been at the heart of the Sisters of Charity mission, and it is one that Lifetime Associate Kay Clifton practices daily. …